One person has taken to NUSWhispers with a rant about how her boyfriend has "disappointed" her by buying her a Louis Vuitton wallet.

The rant was posted on May 26 and has since gone viral with over 3,900 shares.

In the submission, the person said that her boyfriend got her a Louis Vuitton wallet, which costs around S$700.

When she saw the wallet, however, she felt "upset and disappointed" because her sister's boyfriend got her a Chanel wallet which costs at least S$1,000.

She also said that she preferred Chanel to Louis Vuitton, adding that "LV is for poor people who want to look rich".

"Sometimes I really feel like a loser.. why my sister can find such a good bf but I just cannot."

NUSWhispers is an anonymous confessions platform that sometimes serves as a breeding ground for trolls.

It is unclear if the poster is a troll.

But the one thing that's clear is how this rant has triggered a barrage of comments in response to it.

A somewhat-typical response involves comments criticising the girl for not being appreciative:

Some, of course, pointed out that this story is surely "fake".

However, many comments also focused on a wider discussion surrounding what a meaningful relationship should be about.

Some even dished out some pretty solid advice on not expecting anything from our partner, because that will only put unnecessary stress on the relationship.

General advice and discussion on relationships 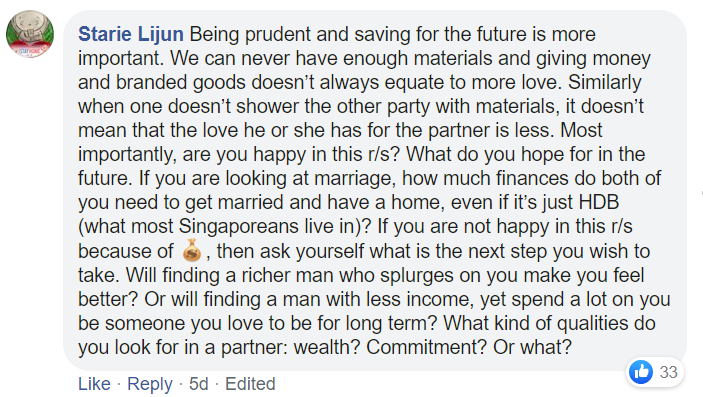