Japan's thrill ride parks are reopening as the overall number of Covid-19 cases in the country has been decreasing.

Theme parks, in response, are looking for ways to safely reopen before the end of the summer vacation.

And they have hit upon an ingenious idea to prevent the spread of the coronavirus: By recommending no screaming is allowed while riding the roller coasters in the parks.

The East Japan and West Japan Theme Park Associations are promoting this initiative.

The initiative has won the support of Tokyo Disneyland and Universal Studios Japan -- which don't feature rides that are exceedingly scary.

This particular thrill ride park -- which is a day trip from Tokyo -- houses Japan’s most lung-bursting, buttocks-clenching thrill rides, such as marquee roller coaster Fujiyama.

When Fujiyama opened in 1996, it was the tallest roller coaster in the world.

Its 79-metre apex has been ranked the eighth highest globally.

It’s also the fifth longest ride in the world.

Not screaming on this roller coaster would, therefore, require the summoning of biblical powers of restraint.

In response to doubters, Fuji-Q Highland has released a demonstration video, "Example of How to Ride Thrill Rides in the New Style".

It turns out, they are the bosses of the theme park.

The one in bow tie is Fuji-Q Highland president Daisuke Iwata, and the other person in a suit jacket is Koichiro Horiuchi, president of rail and bus operator Fuji Kyukou, Fuji-Q Highland’s parent company.

The two of them take a ride on Fujiyama without making a squeak.

And even keeping their face masks on. 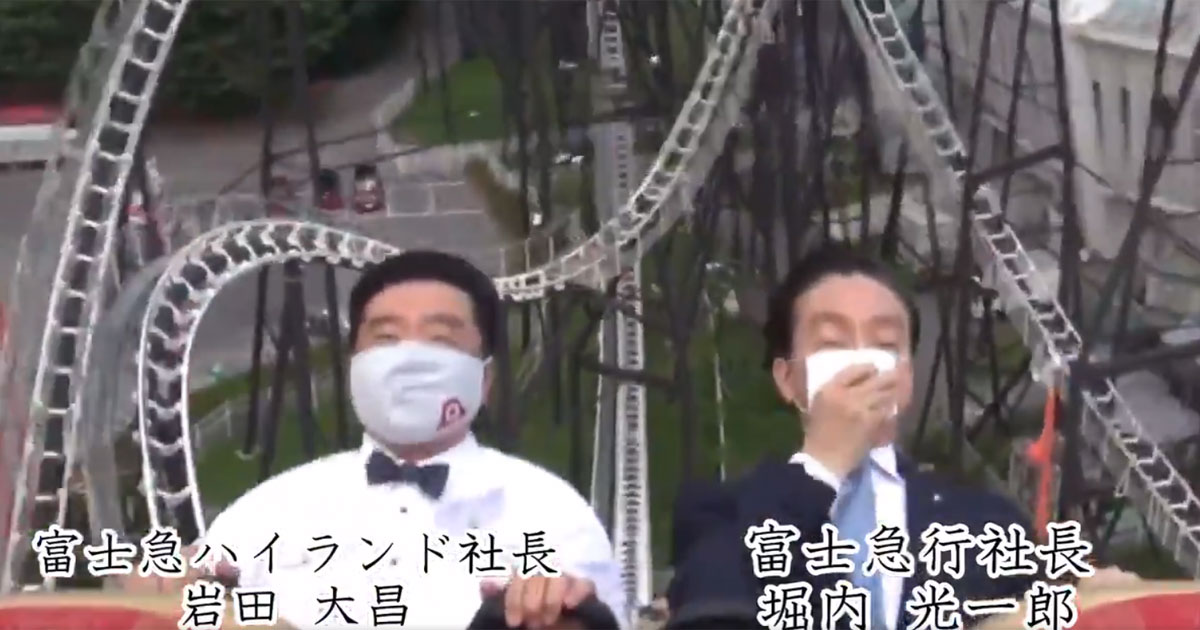 The tweet pointed out that Horiuchi is afraid of heights, which explained why he appeared less poker faced than boss Iwata, who remained po-faced.

“Please scream inside you heart,” the on-screen text requests as the video ran its length.