If you're hoping to hear what your potential future MPs have to say in in the lead-up to polling day on July 10, here are some dates to watch out for. 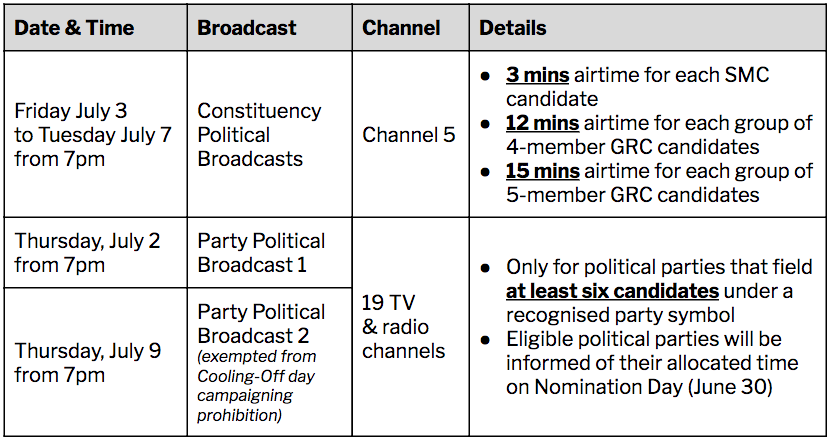 Further details of the airtime political parties and candidates will have on national free-to-air TV and radio channels were announced by the Elections Department (ELD) today, June 24.

Arrangements for all candidates to make CPBs have been made in view of the fact that there will be no physical rallies, since large group gatherings are not allowed in Phase 2, ELD said previously.

Each candidate contesting in a Single Member Constituency (SMC) will be given three minutes.

Similarly, each group of candidates contesting in a Group Representation Constituency (GRC) will be given either 12 minutes or 15 minutes respectively, depending on whether it is a four or five-member GRC.

The CPBs will take place between July 3 and July 7, from 7pm and will air on Channel 5.

ELD said that recording for the CPBs will start on July 2.

Besides the CPBs, candidates may also get airtime as part of PPBs.

However, PPBs are only for parties which are fielding at least six candidates under a recognised party symbol, as per the practice in previous elections, including the 2015 elections.

July 9 is the date of Cooling-Off day, where campaigning is prohibited, but PPBs are exempted from this prohibition.

The PPBs will each be recorded the day before, on July 1 and July 8.

Guidelines to be issued by June 25

Political parties and candidates may only broadcast in "all or any of the four official languages" (i.e. English, Mandarin, Malay, and Tamil), ELD said.

Also, the broadcasts should not contain "matter of a libellous or criminal nature".

ELD said that guidelines for both CPBs and PPBs would be issued by June 25, by the Infocomm Media Development Authority (IMDA).

ELD said that members of the public are advised to watch the political broadcasts from their homes, and to avoid gathering in public to do so.

It also advised political parties and candidates to remind their supporters of this.

Top image via @john_wang on unsplash