Chinese officials and state media are trolling United States President Donald Trump and politicians in the midst of race-related protests and looting that have engulfed American cities the last few days.

The U.S. is struggling to contain widespread protests and violence triggered by outrage over the death of George Floyd, an African-American man who died after a police officer pressed a knee into his neck while on the ground for more than eight minutes.

China’s foreign ministry and state media seized the opportunity over the weekend to hit back at Trump, having been on the receiving end of American needling.

Such media have been utilised to varying degrees of success in galvanising domestic support and shaping opinion within China in decrying social instability as seen in the western democracies regularly plagued by chaos and unrest that would never be permitted in the mainland.

Foreign ministry spokeswoman Hua Chunying tweeted a screen shot of U.S. State Department spokeswoman Morgan Ortagus's previous tweet and added, “I can’t breathe” -- some of the last words uttered by Floyd before he died that have become a rallying cry.

Ortagus had urged in her old tweet for people to stand against the Communist Party over its treatment of Hong Kong.

Hua then tweeted a link to a Russian media video report on the U.S. violence with the words “THUGS & HEROES HYPOCRISY”.

The tweet was a reference to double standards over the Hong Kong protesters.

U.S. lawmakers previously praised the protesters as China repeatedly condemned them for acts of vandalism, arson and throwing petrol bombs at police.

In a series of tweets, Hu Xijin, the editor of the hawkish Global Times, ridiculed Trump and other senior U.S. politicians for previously encouraging the protests in Hong Kong.

The 'beautiful sight' difined by US politicians has eventually extended from Hong Kong to the US. Now they can witness it by their home windows. I want to ask Speaker Pelosi and Secretary Pompeo: Should Beijing support protests in the US, like you glorified rioters in Hong Kong? pic.twitter.com/tvg0kyK8j0

Hu also asked Trump to not hide behind the Secret Service and speak to the rioters directly, like how the U.S. previously urged Beijing to meet Hong Kong protesters:

Mr. President, don't hide behind the Secret Service. Go to talk to demonstrators seriously. Negotiate with them, just like you urged Beijing to talk to Hong Kong rioters. pic.twitter.com/nTOnO0sptk

Hu also tweeted that Hong Kong protesters have infiltrated the U.S. and are the "mastermind" behind the chaos.

I highly suspect that Hong Kong rioters have infiltrated American states. Attacking police stations, smashing shops,blocking roads, breaking public facilities, these are all routine in their protests. Vicious HK rioters obviously are mastermind of violent protests across the US😡

Hu previously wrote a scathing trollish piece on May 29 telling the U.S. to stand with Minnesota violent protesters as it did with HK rioters.

Other Global Times editorials have emerged: 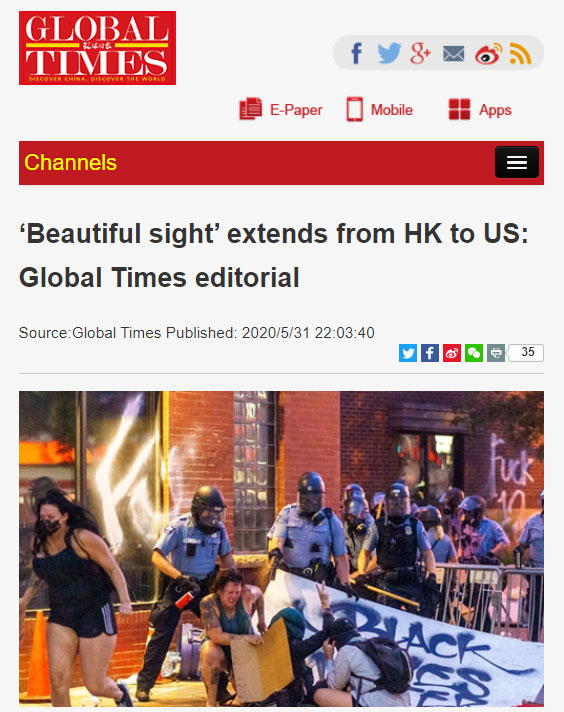 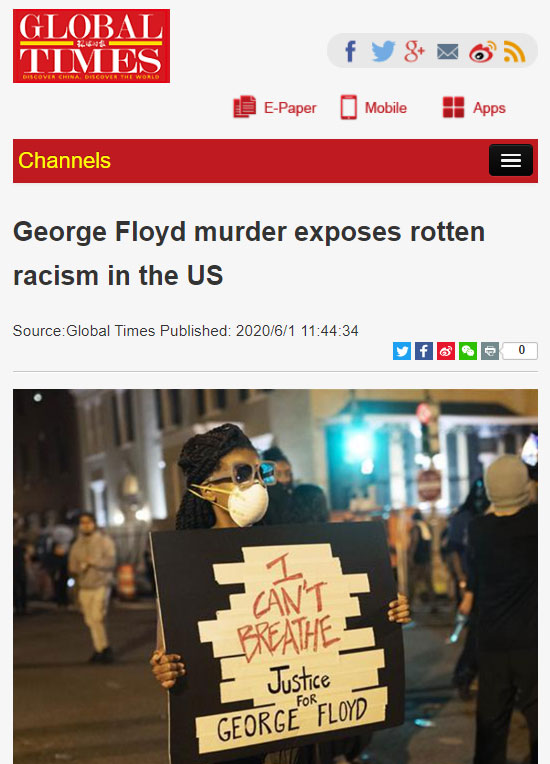 The clips were first posted by state media outlets such as the People’s Daily newspaper and Global Times.

“U.S. politicians call riots in other countries ‘a beautiful sight,’ they ignite flames everywhere and wish the world to be in chaos,” state broadcaster CCTV said separately in a commentary Saturday.

“But when the minority groups in their own country are fighting for legitimate rights, they cannot wait but to crackdown harshly. Such hypocritical double standards are truly disgusting.”

By Monday morning, “U.S. National Guard firing into residents homes” was one of the top 10 search topics on the Twitter-like service.

Fellow ministry spokesman, Zhao Lijian, retweeted numerous comments and reports on the protests, including from Russia’s deputy representative to the UN, accusing the US of double standards.

“Why US denies China’s right to restore peace and order in HK while brutally dispersing crowds at home?” said Dmitry Polyanskiy.

Trump will meet on Monday, June 1, with Attorney General William Barr at the White House.

He would then convene a teleconference with governors, law enforcement and national security officials, the White House said late Sunday.

The decision has alarmed foreign governments and prompted the U.S. to threaten retaliation.

The U.S. announced on May 29 that it would “begin the process” of eliminating the policy exemptions that allow America to treat Hong Kong differently than the mainland.

Trump had expressed alarm about the “deeply troubling” situation in Hong Kong, but he soon found himself facing similar scenes on the streets of U.S.