(Editor's note):The previous version of this story said that deliverymen and taxi drivers could eat at neighbourhood police stations, when in fact, they can't do so. The article has been updated to reflect this.

Singapore's circuit breaker kicked in on Apr. 7, and with it, a slew of safe distancing measures as well.

Since then, members of the public are not allowed to dine in at hawker centres and other F&B outlets, and can only take away their meals.

While this might be convenient for those working from home, some people in certain professions have been left in a difficult situation.

Those working in essential services such as deliverymen and taxi drivers are now unable to find proper places to sit down and have a meal.

A photo posted by Marcus Poh showed a deliveryman sitting by the kerb, eating out of a takeaway box.

In his Facebook post, Poh raised concerns about the lack of proper sitting areas where deliverymen and riders can eat.

Taxi drivers too, appear to be experiencing the same hardships. 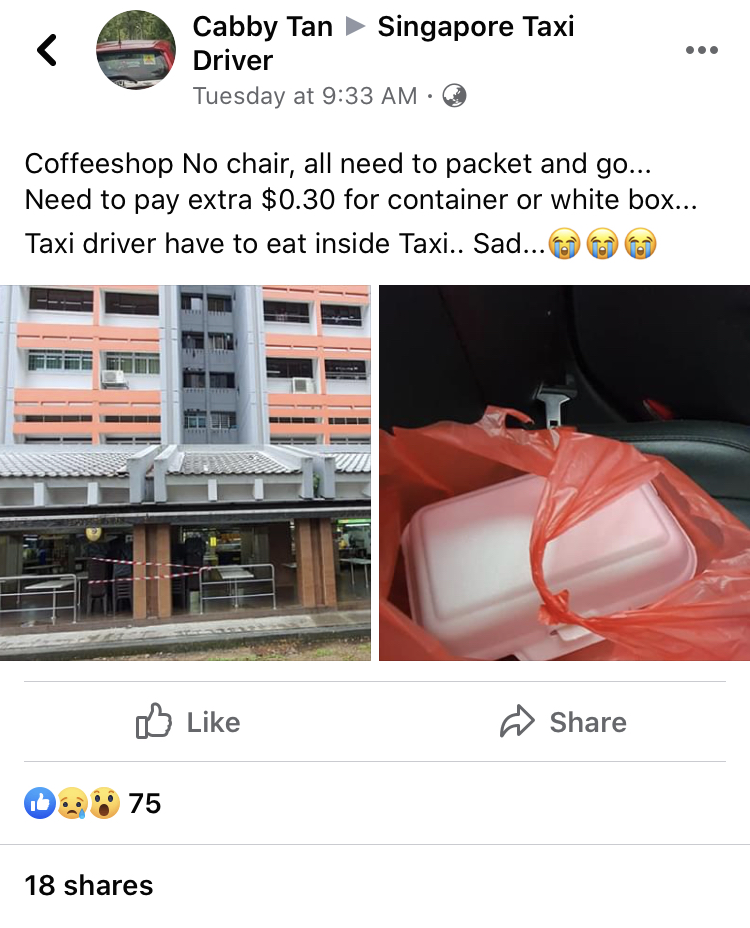 One Lisa Neo said that she felt "emotional" upon encountering a taxi driver having his meal in the confines of his vehicle.

She urged Singaporeans to be compassionate, saying that some cabbies might not have the luxury of heading home to eat due to low ridership in this period.

Another cabbie was spotted sitting in his open boot and eating takeaway food.

Void decks out of the question

In these cases, eating at void decks appear to be out of the question too.

A 71-year-old man was arrested after failing to comply with the orders of police officers who asked him to stop eating at a void deck.

The man could have been a lorry driver, as his lorry was parked nearby.

Environment and water resources Minister Masagos Zulkifli has also stated that gatherings at void decks and playgrounds are not allowed.

However, Mothership understands that deliverymen and taxi drivers can visit community centres to have their meals.

In response to queries, Grab told Mothership that they are aware of riders' meal situations, and have reached out to the relevant government agencies to seek further guidance.

In light of the situation faced by deliverymen and drivers, Mothership has also contacted ComfortDelGro, SMRT and the Ministry of Environment and Water Resources and will update this article when they reply.