A 28-year-old Singaporean woman returning from Germany has taken to Instagram to document her 14-day Stay-Home Notice experience at the Village Hotel Sentosa.

Since March 20, all travellers entering Singapore are issued a 14-day Stay-Home Notice (SHN).

Came back home from Berlin

Winifred Wong was flying home from Berlin, Germany, where she was based at -- she works for Wayfair, an American e-commerce furniture company.

She transited at London, United Kingdom, before arriving home.

After landing in Singapore on Friday night, March 27, Wong said she was overcome with emotions when she saw Changi Airport. 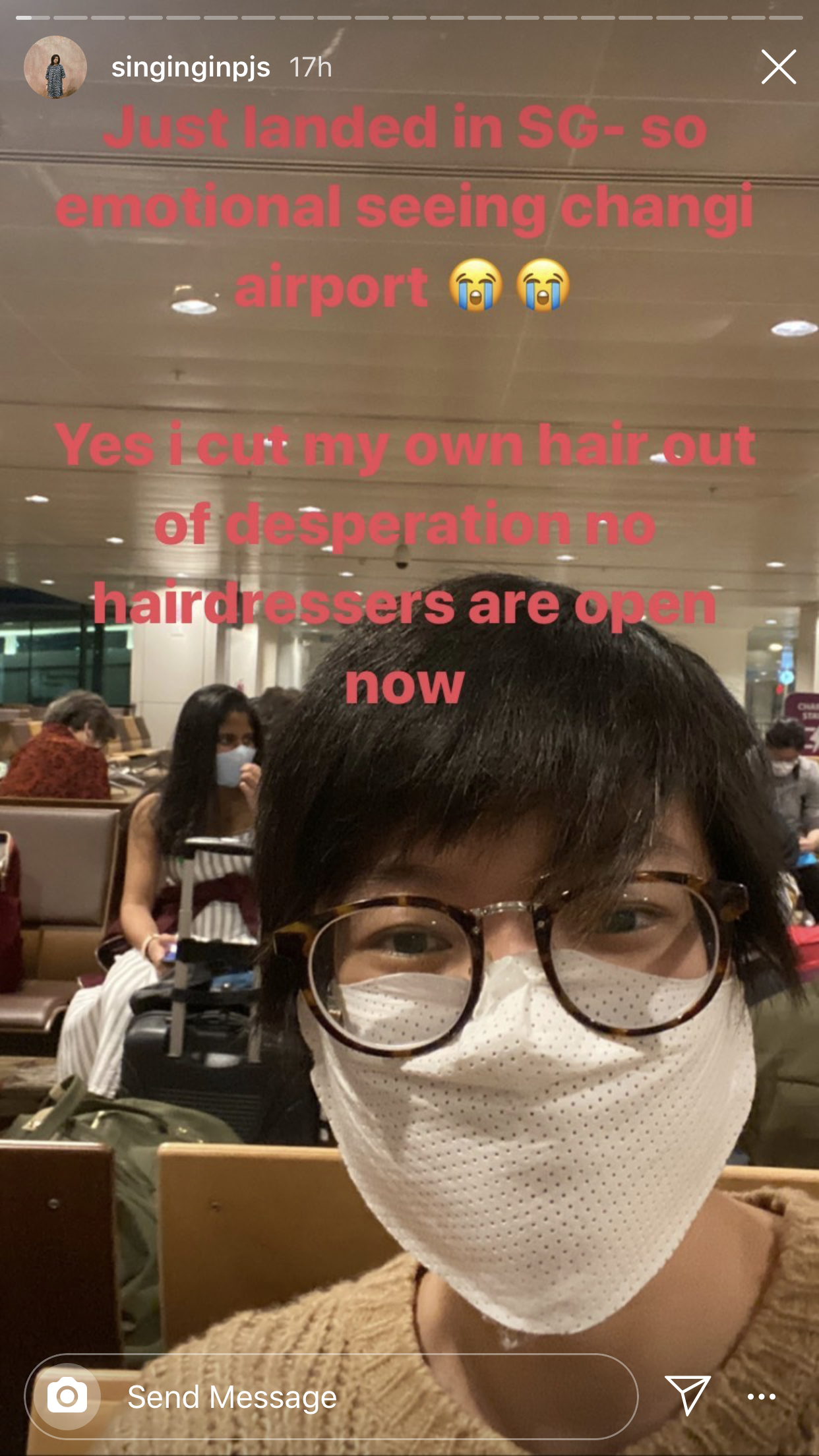 She told Mothership she had cut her hair herself as no salon was currently open in Berlin.

At Changi Airport, Wong said she, as well as other Singapore citizens and residents about to serve their SHN, received several instructions, such as remaining in their place of residence "at all times' during the 14-day period.

Staff took their temperature right after they landed

Wong also observed that there was "an entire entourage of people" waiting for them the moment they got off the plane.

Airport staff took their temperature, and checked their names off a list after checking their passports.

She added that there were as many as 50 ushers around to guide them to a waiting area where they filled in a health declaration form from the Immigration and Checkpoints Authority, and also the SHN form where they entered the Village Hotel Sentosa address.

The officers deployed were "super duper helpful and polite", she said.

Wong also found their luggages already collected and arranged neatly next to the belt.

One and a half hours later, they boarded a bus and headed towards the Village Hotel Sentosa. 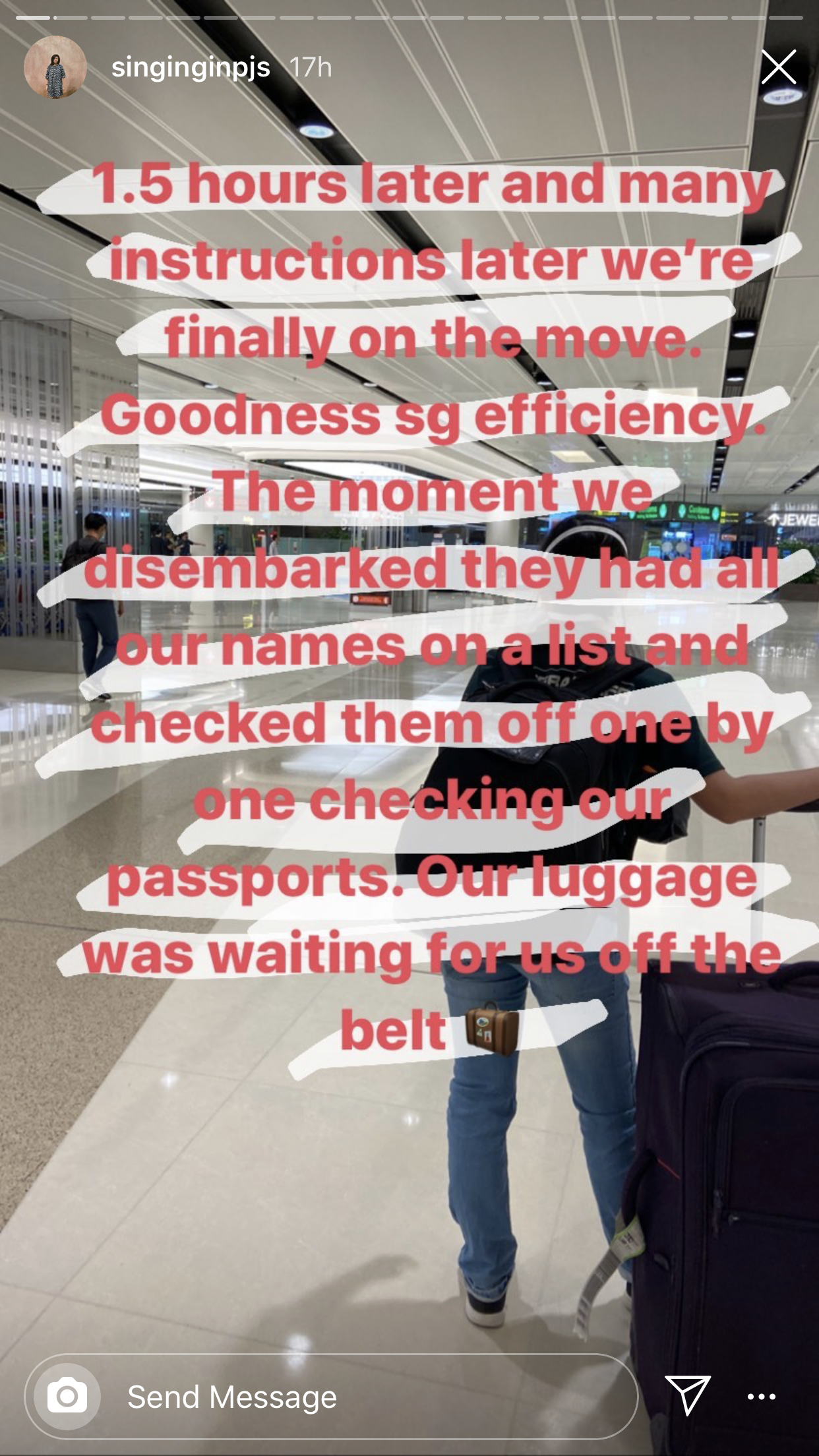 When they left the airport at about 8:30pm, Wong noticed many "hardworking" staff who were still working at that time, and thanked them for their work. 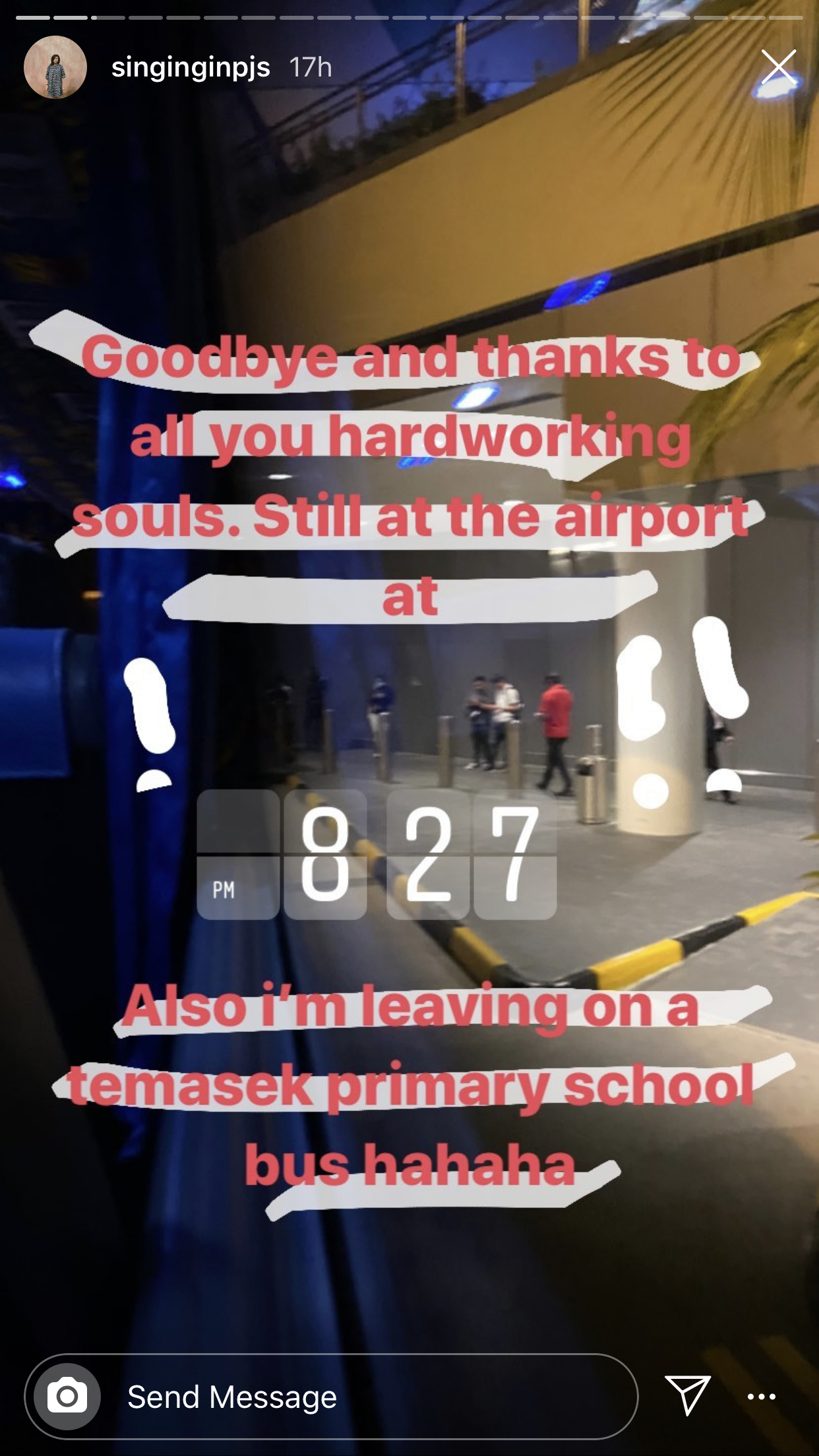 On the bus, she noted that passengers were seated a distance away from one another due to social distancing measures.

While there were 21 of them in total, they were split into three groups of seven.

Each bus carried only seven passengers. 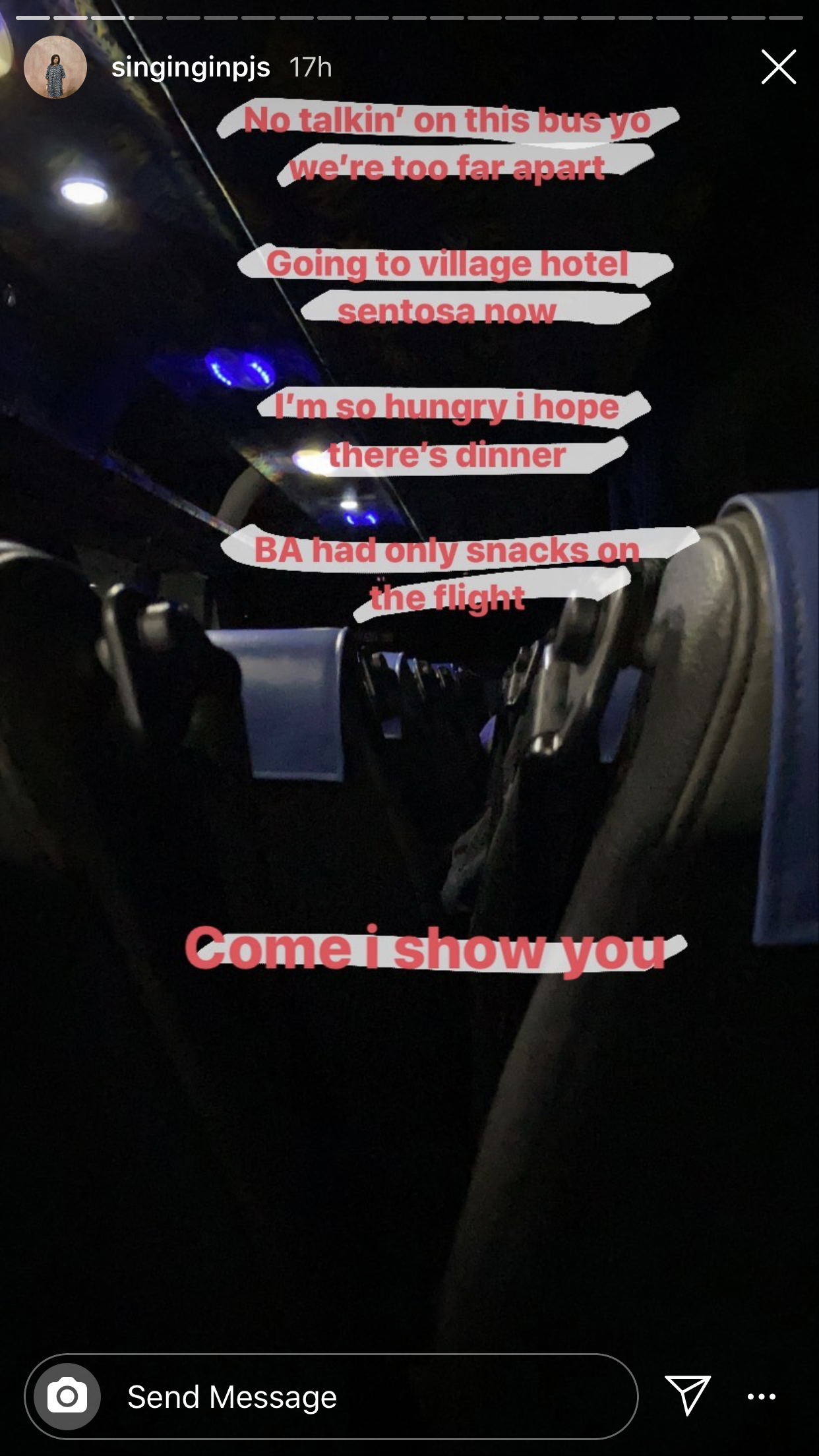 After arriving at the hotel, staff at the lobby greeting them and taking their temperature were seen wearing face masks and protective gloves.

She also observed that people were standing "very far apart" from one another. 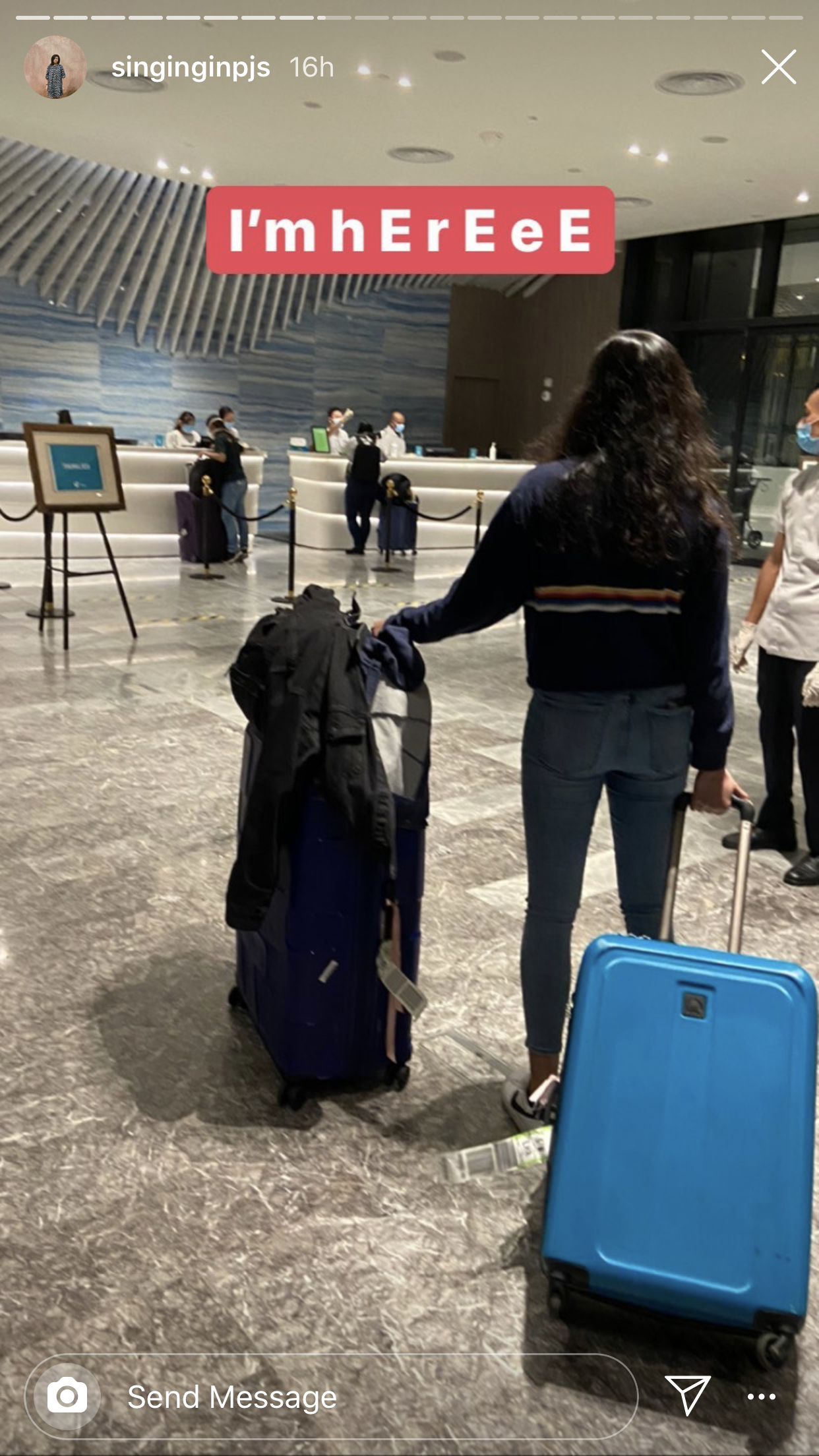 Wong received some written instructions from the hotel, as well as a thermometer to check her temperature twice a day, which she received after asking for it. 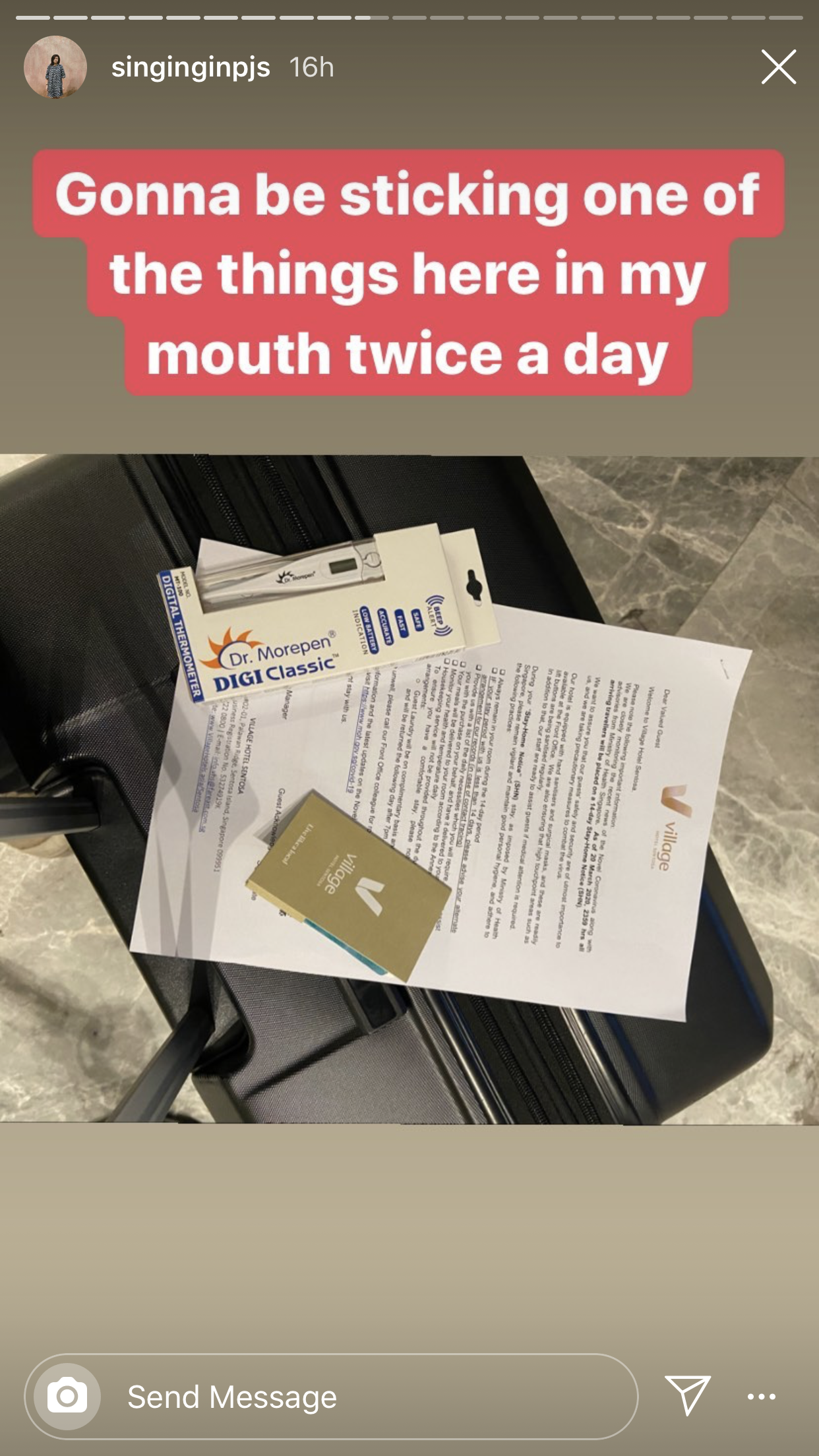 Upon reaching her floor, she noticed that there were plenty of stools placed outside the rooms. 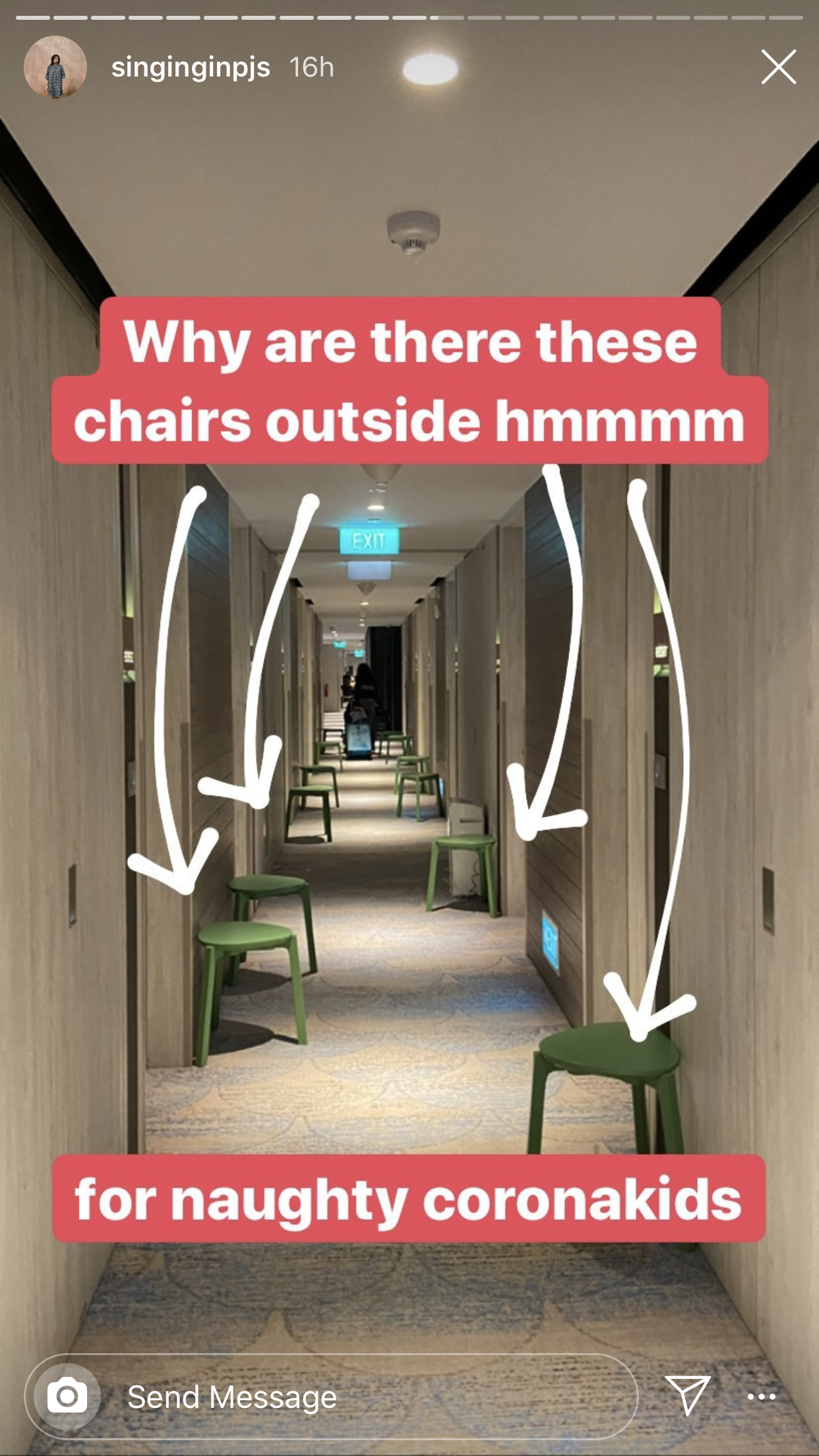 Wong told Mothership the stools were there for staff to place items or food to be delivered to the occupants, after they were collected at a collection point outside the hotel.

Family and friends of the occupants could also drop stuff off for them at the collection point.

Her friends had already offered to bring her bubble tea and a synthesiser so she can play music -- Wong writes songs in her free time.

She added that there is absolutely no contact between the hotel staff and the occupants, as the staff will leave immediately after ringing the doorbell to notify the occupants of the delivery outside their rooms.

Wong took pictures of her room as well.

She saw that it was stocked with several tubes of soap, something that she found amusing. 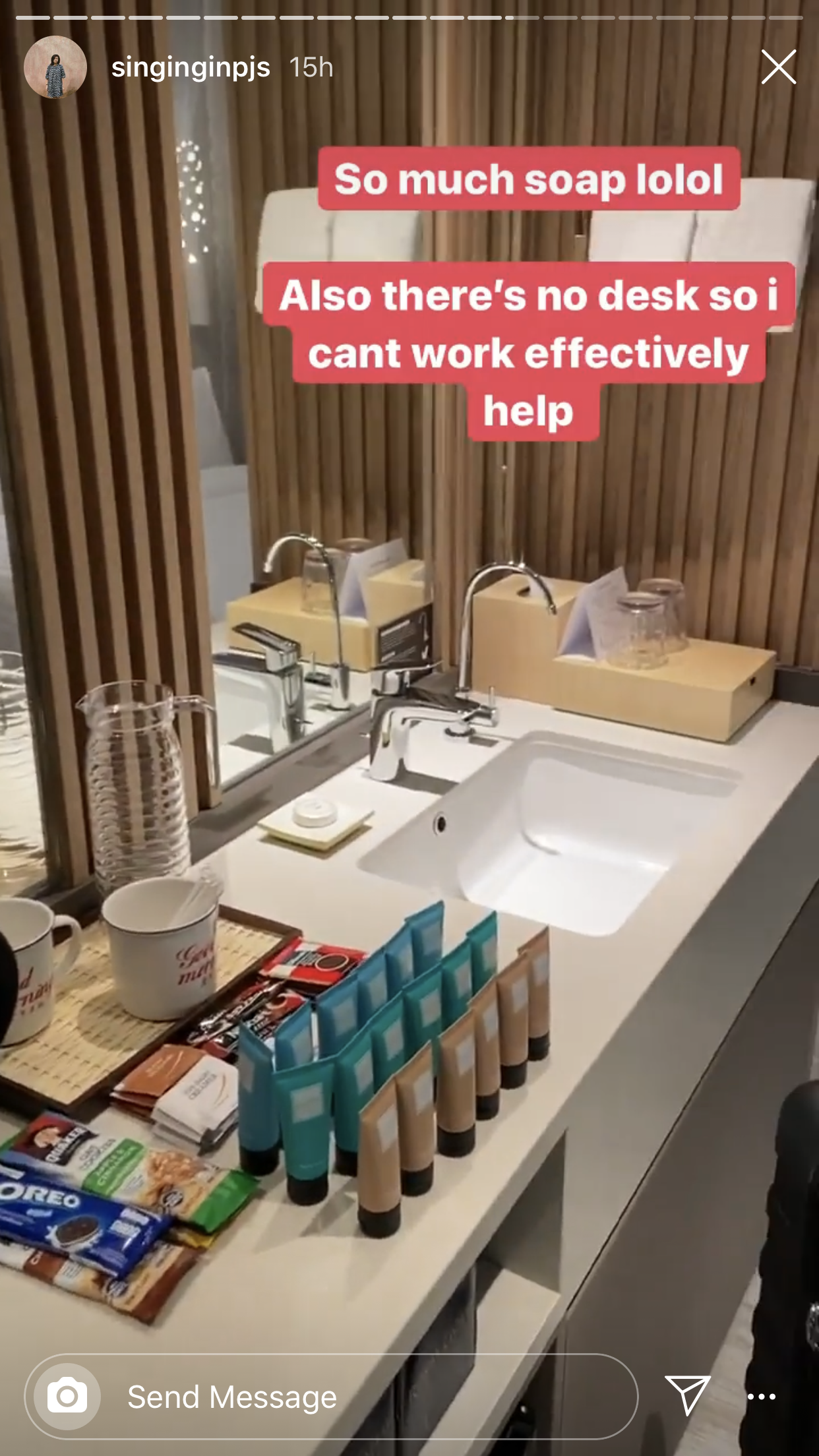 There was a TV and a queen-sized bed too. 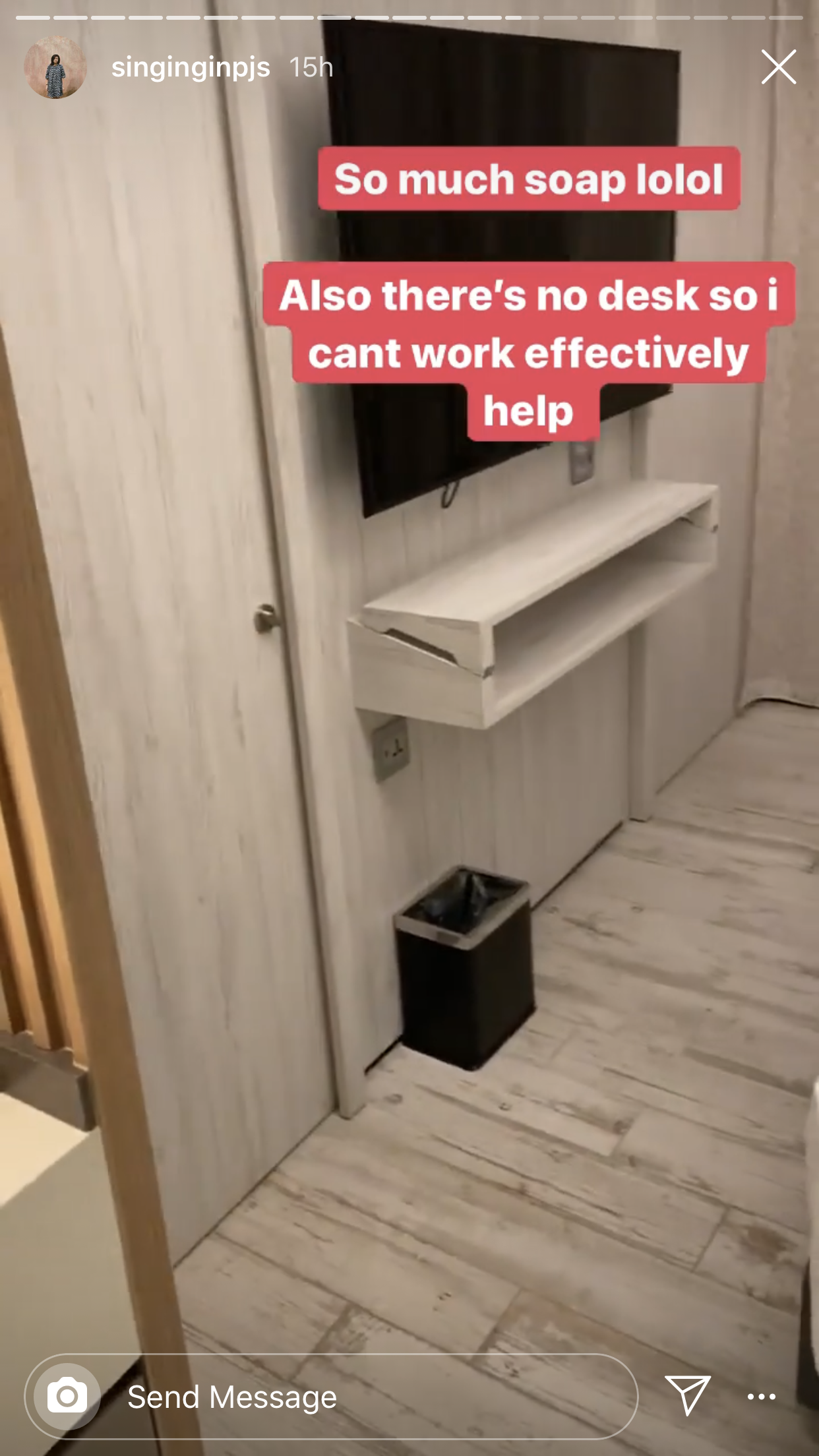 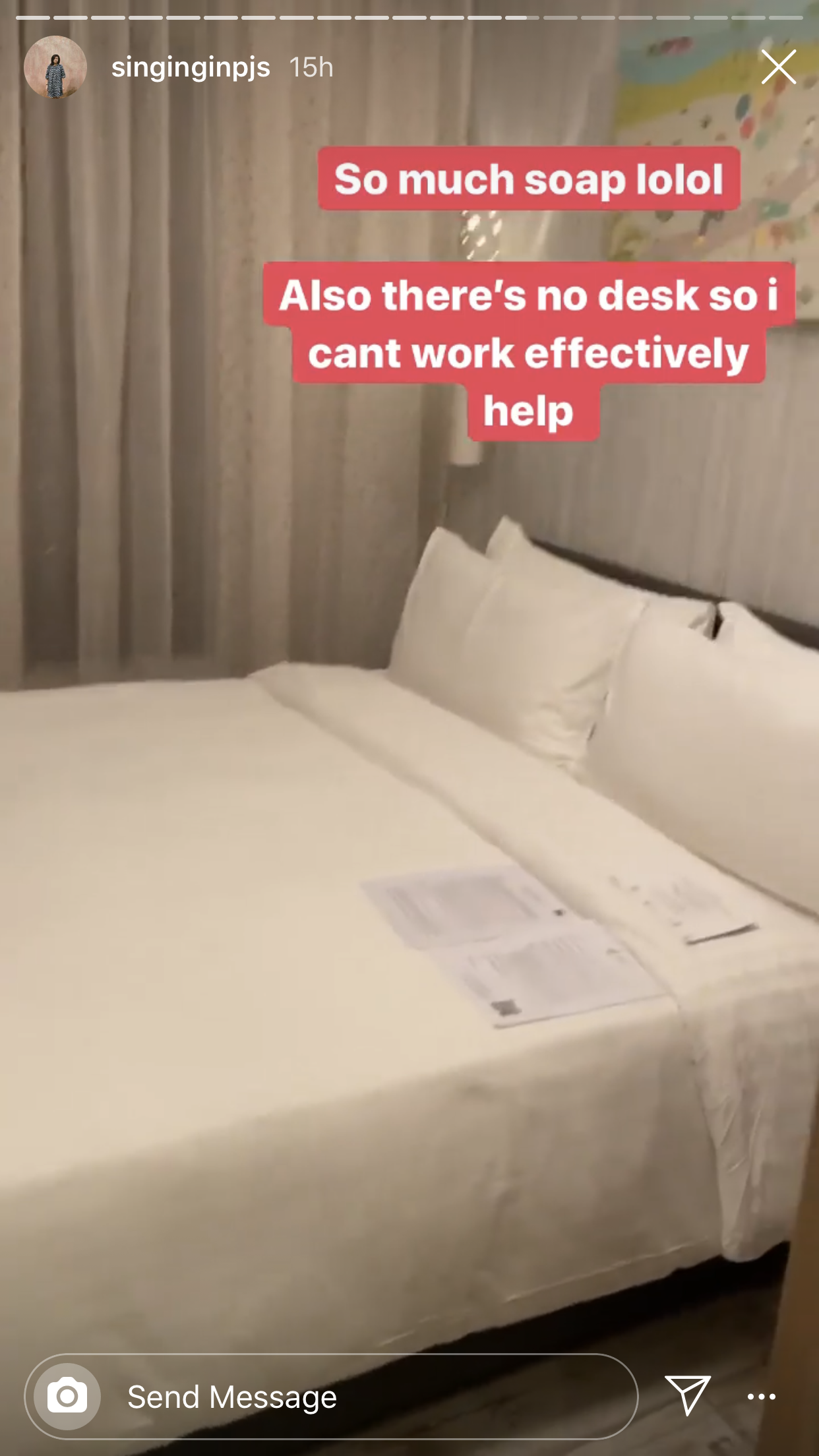 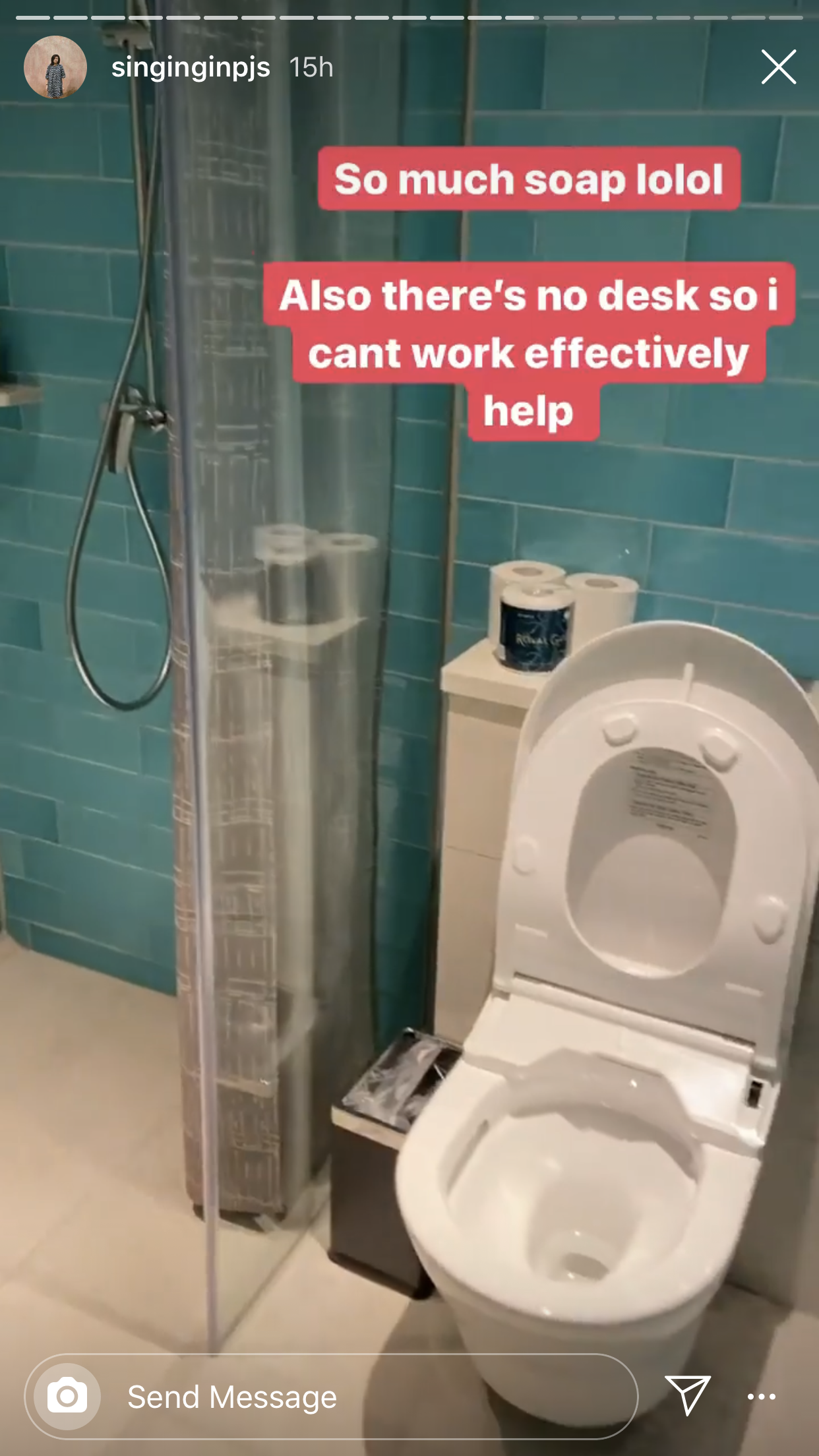 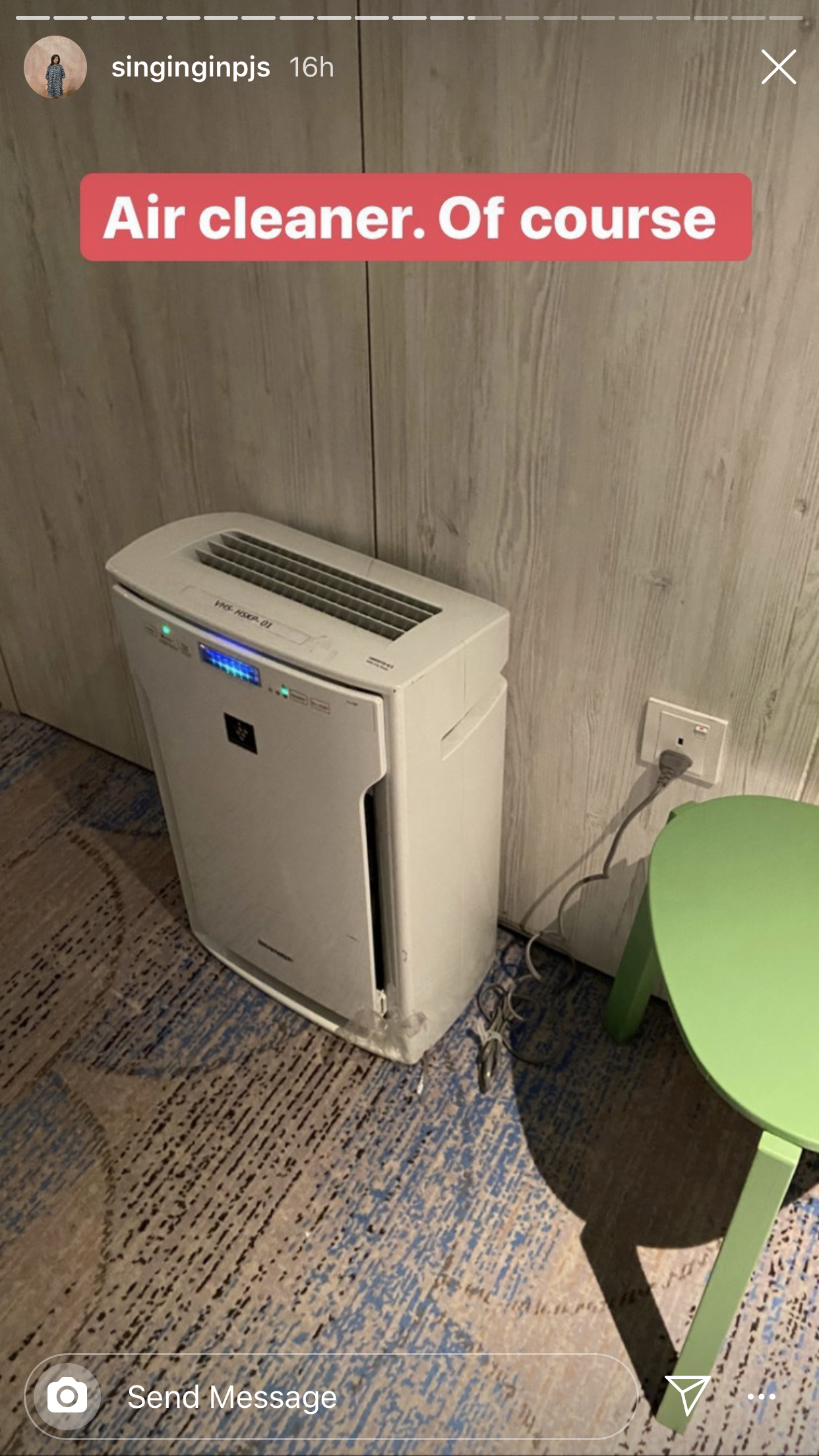 But there was no table in the room, which might be a small inconvenience for someone who is used to working at a desk.

Wong said she has since asked for a chair from the hotel so she could work at the pull out table that was under the TV.

As for the view outside her room, she could see the Merlion statue and cable cars at Sentosa. 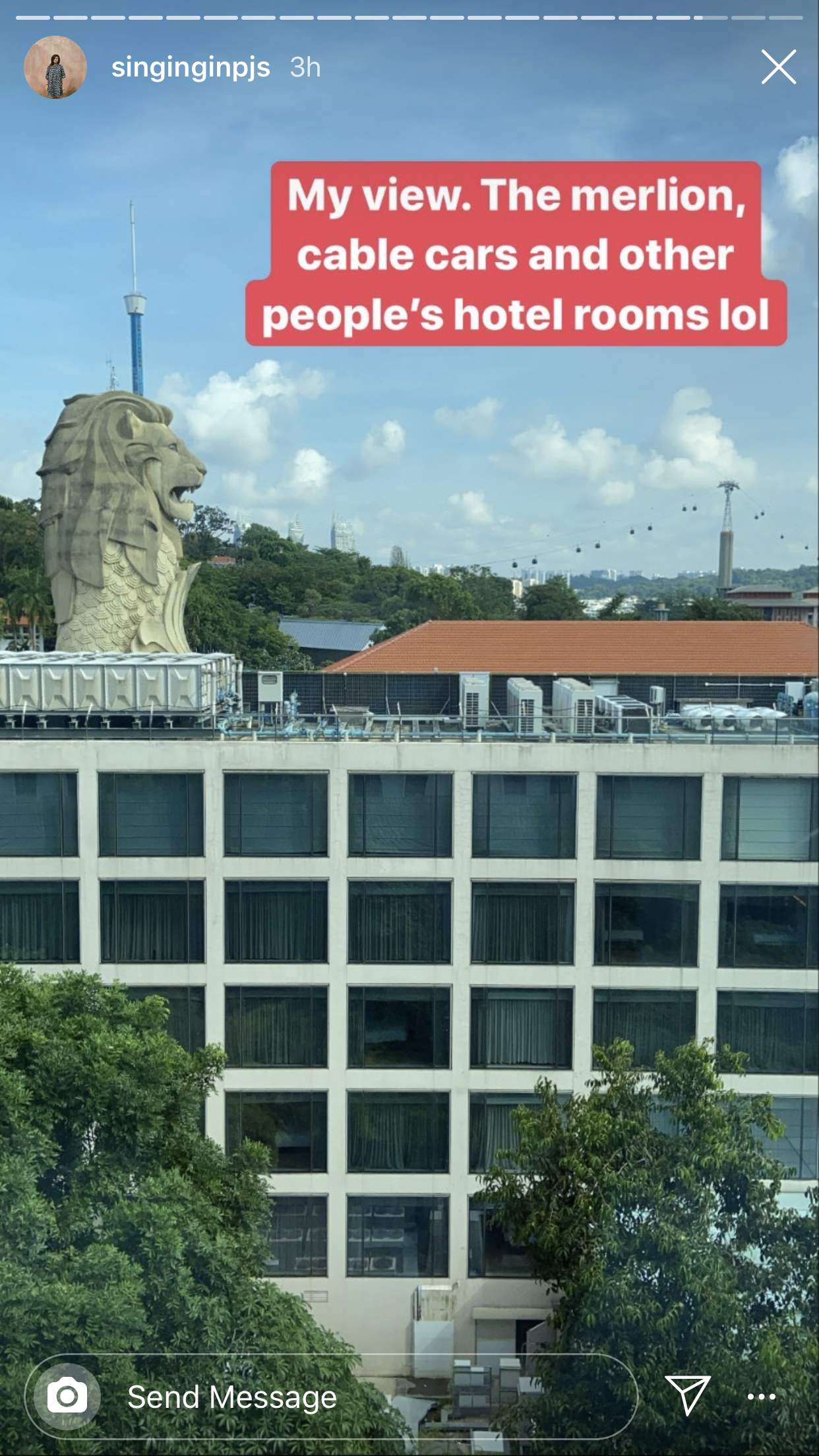 While Wong jokingly said she is "going a little mad" thinking that she has to stay at the hotel all alone for the next 14 days, she plans to catch up on her reading, do some writing, and binge-watch Netflix. 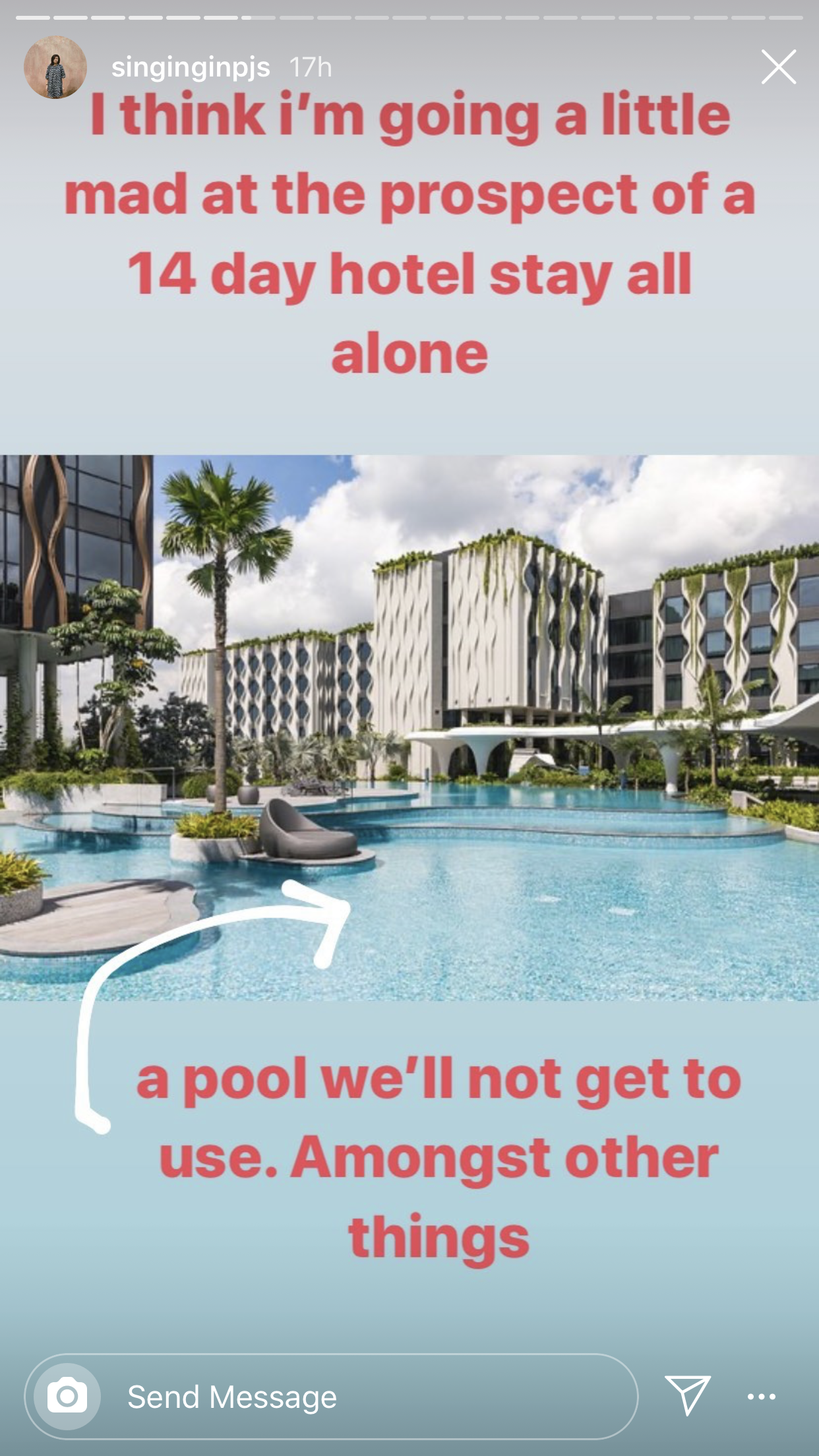 She will also be working from 3pm to 12am on weekdays per the working hours in Berlin.

Wong took a picture of the schedule listing the various timings when food will be delivered to the occupants. 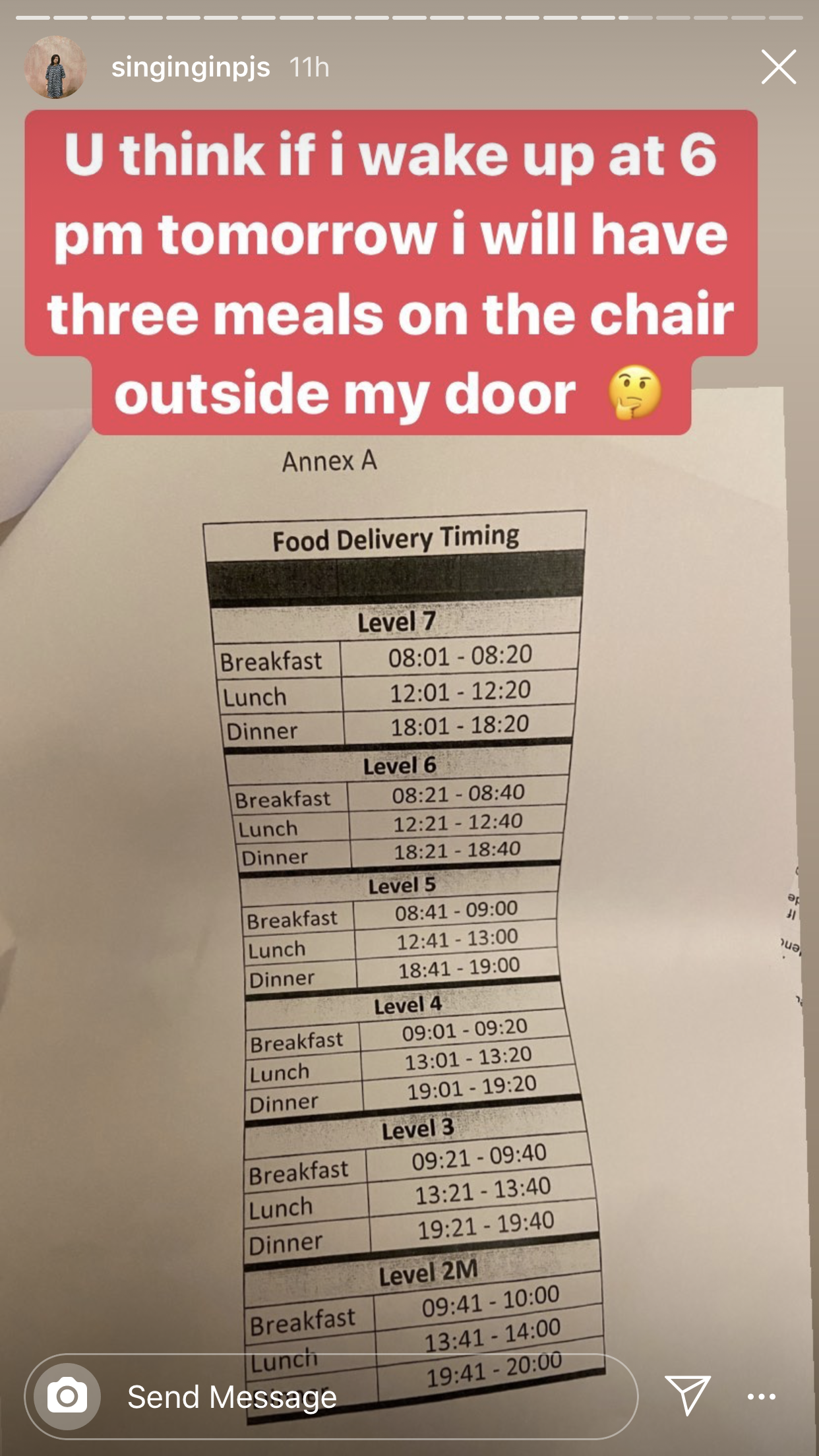 Upon arriving at the hotel on Friday night, her dinner was served.

It had rice, some meat, vegetables, an orange and a pack of sugar cane drink. 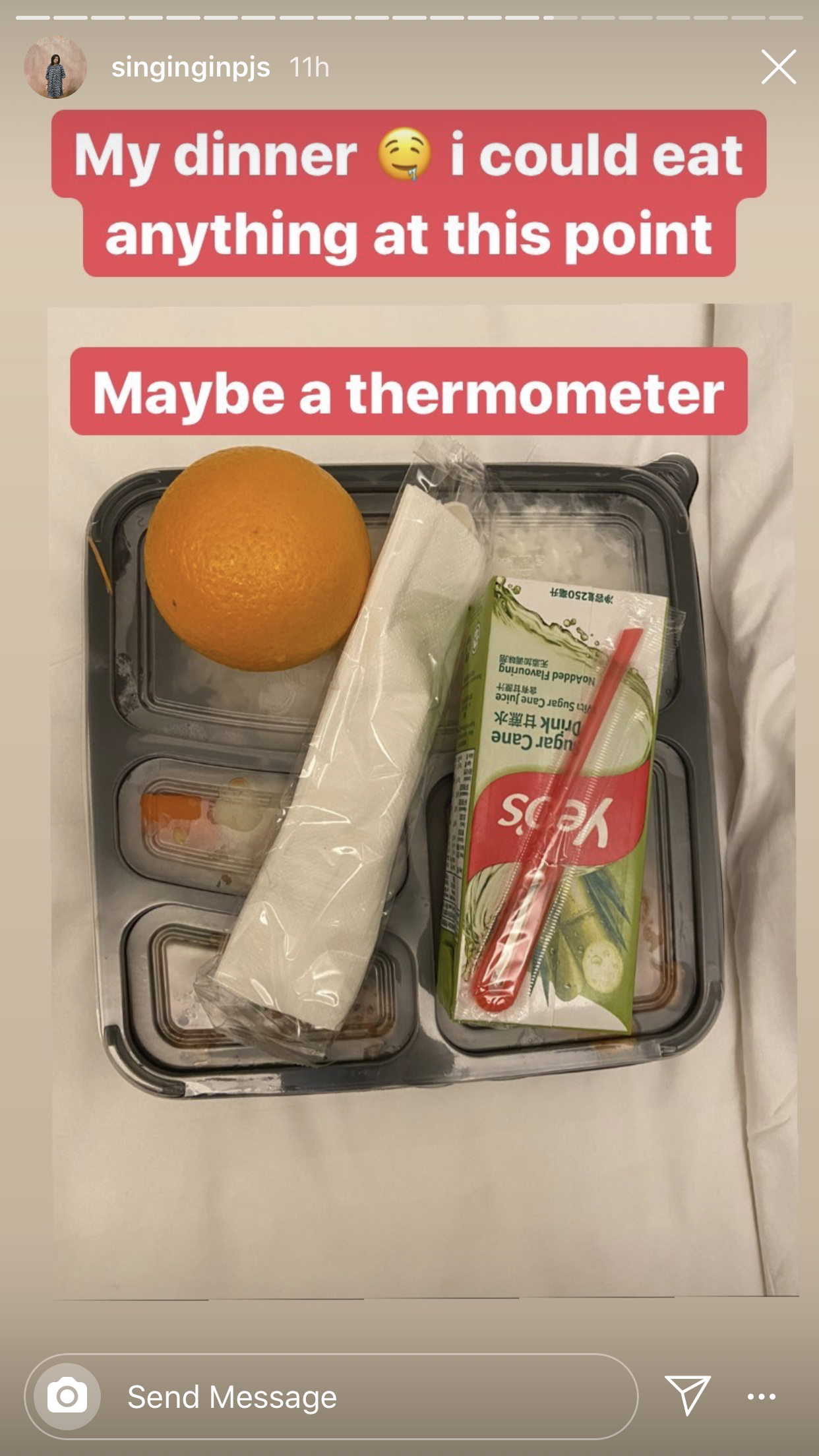 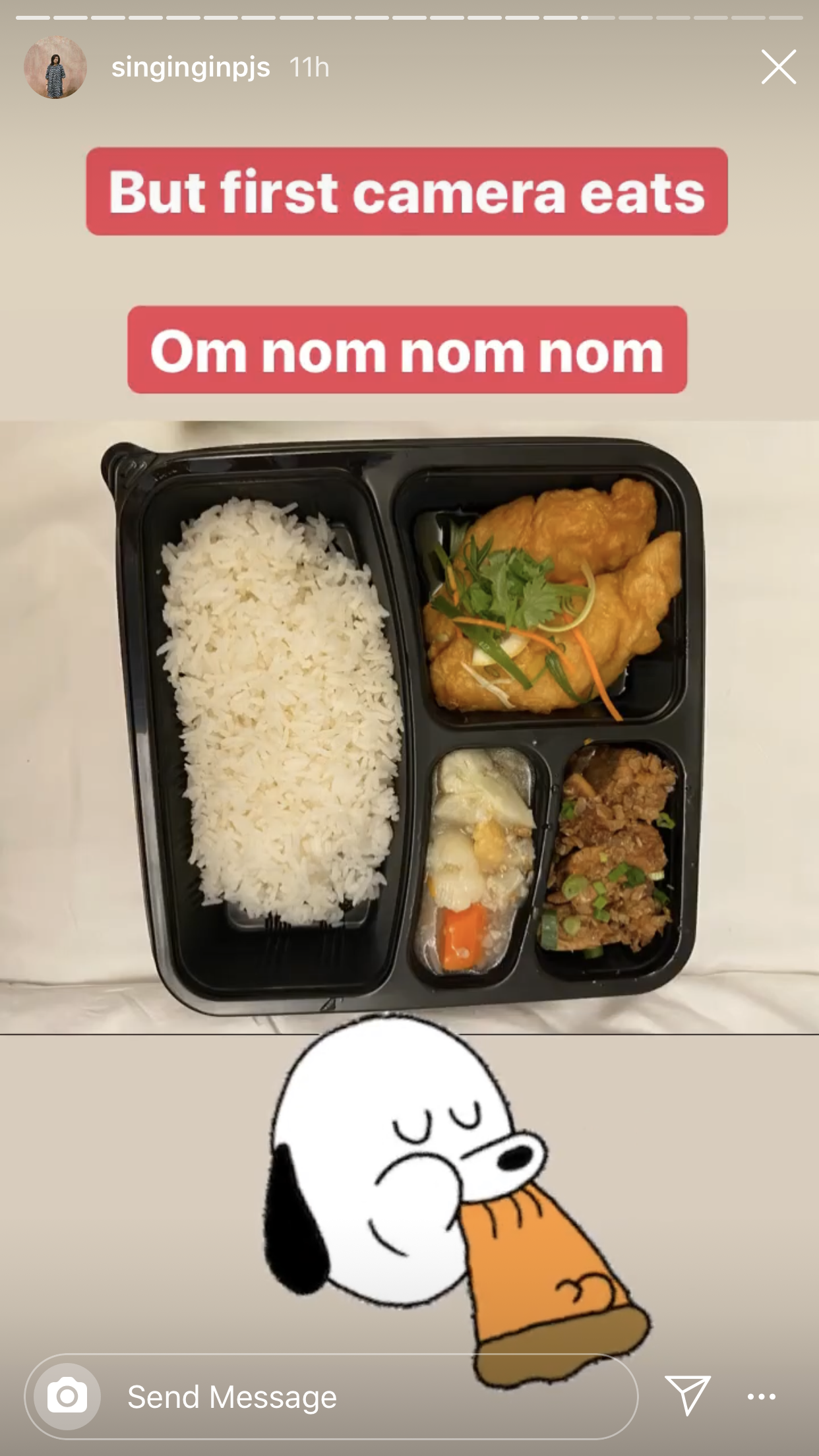 Her breakfast came right on the dot at 8:40am. 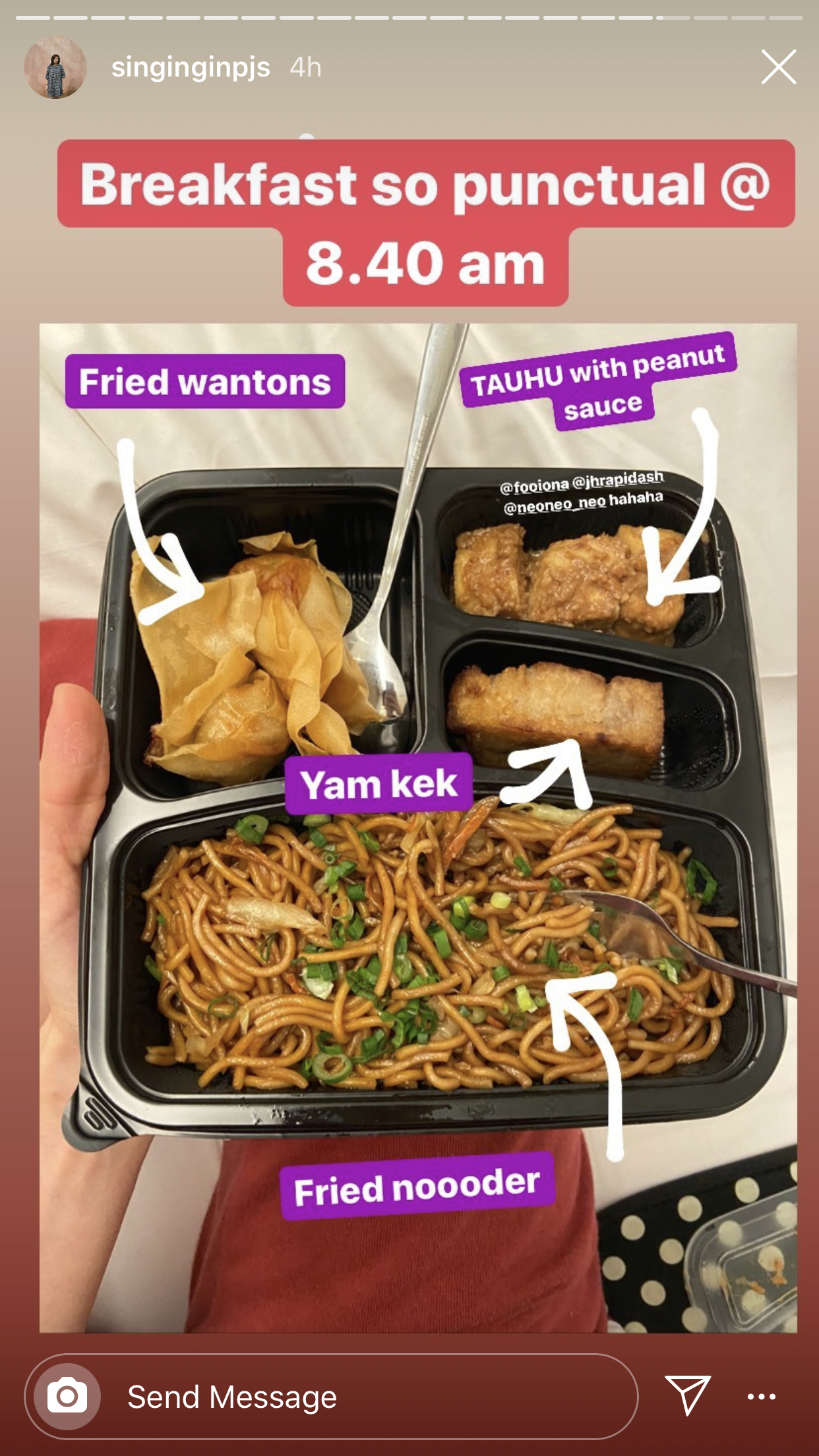 The next day on Saturday, March 28, Wong received a call from a staff member that told her to call should she need anything during her stay -- a gesture she found to be rather "sweet". 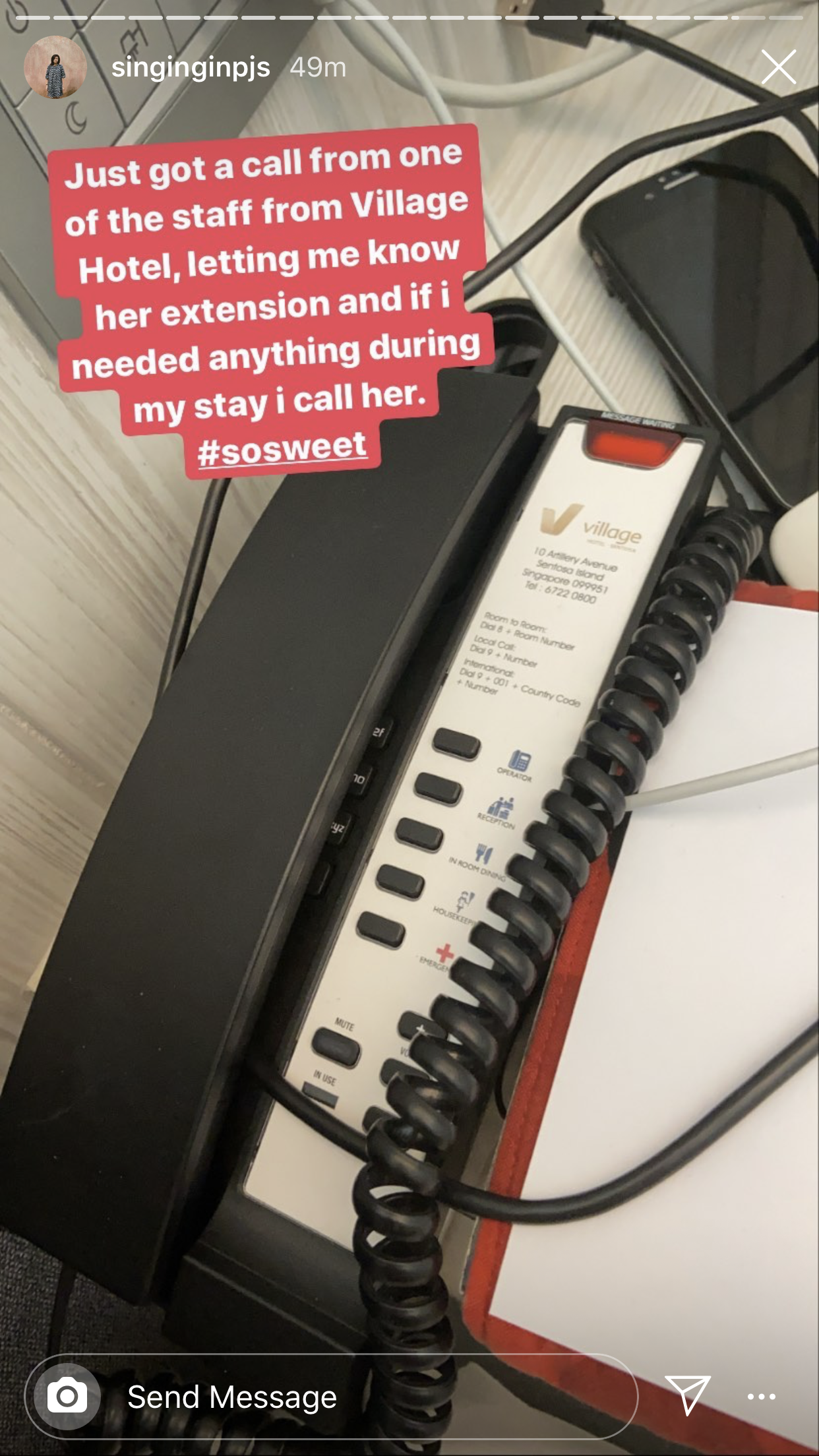 Reflecting on the process of being whisked away to the hotel to serve the 14-day SHN, Wong said she had never appreciated "Singapore's efficiency and their systematic way of dealing with crisis" as much as now.

She also urged everyone serving their SHN to "stay strong, stay sane and be healthy".