The National University of Singapore has issued a statement to inform the public that the NUS Atheist Society Facebook page is not affiliated with the tertiary institution.

The statement by NUS was posted on March 20, after law and home affairs minister K Shanmugam slammed a post by the page that was deemed offensive to Muslims and Christians in Singapore:The police are investigating the case.

NUS said in its statement it had on two occasions requested Facebook to "look into the legitimacy of the account".

Facebook looked into the request, NUS added, but the social media giant had apparently responded that people are unlikely to be confused about the "source, sponsorship or affiliation" of NUS Atheist Society.

NUS said it will continue to press Facebook to drop all references to NUS.

This is NUS's statement in full:

Facebook has responded to say that the content on the reported site does not appear likely to confuse people as to source, sponsorship or affiliation, and they are unable to act on our report at this time.

In a unexpected development, the Progress Singapore Party (PSP) announced on March 21 that it would be suspending the membership of one of its members, Jan Chan, with “immediate effect”.

PSP added that it is not linked to the NUS Atheist Society, and that it will work to ensure that all its members “keep within the boundaries of the law”.

PSP also said internal investigations are being conducted for actions made in Chan’s “personal capacity”.

The NUS Atheist Society Facebook page is still active as of March 21.

As per Facebook's notification to the NUS Atheist Society, the visibility of the post that featured the holy books of Muslims and Christians has been curtailed.

It was never my intent to suggest or encourage using two holy books as toilet paper. To that effect, the use of the holy books was intentionally left unspecified and to the interpretation of the audience's imagination. The news media, however, picked up one version of the story and thus, we are where we are.

My intent had been to demonstrate that a purposely vague statement, left to interpretation, could be and would be interpreted in the worst possible way. And, in seeing that the audience of this page are mainly either non-religious or familiar with this style of provocative humour, I had not considered that the post would reach the wider public.

If I had caused personal distress and emotional distress, I sincerely apologise and I am truly sorry. If however, the post had merely elicited outrage, then I would like to kindly request not to instinctively lodge a report to the police or higher authorities to demand satisfaction. Leave a comment and start that the civil conversation in society about questioning religion that atheism has for so long called for, but has thus far been ignored.

It had prior to this apology posted other pieces of content: 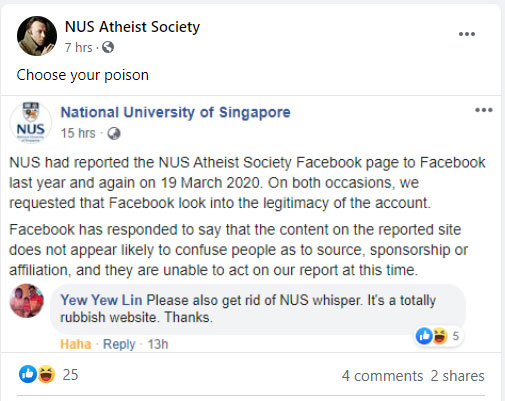 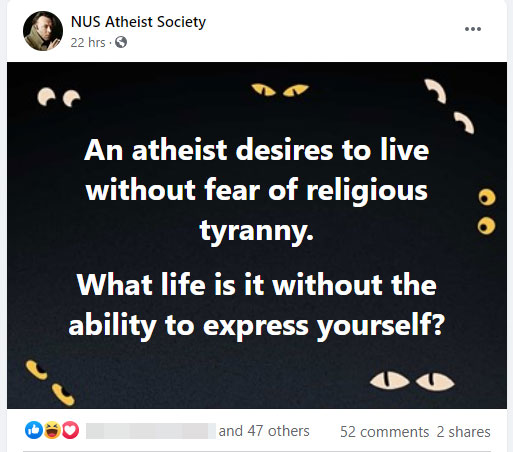