Singaporean actor and singer Aliff Aziz has been making headlines for the wrong reasons lately.

The 28-year-old was caught up in a few scandals, which may have contributed to the end of his marriage.

On Nov. 10, 2019, he was arrested after creating a ruckus whilst drunk near Orchard Towers.

Intense argument with another man on Jan. 12

And just last Sunday (Jan. 12), a man resembling Aliff had an intense public argument with another man.

Unfortunately for the man, the row was caught on camera and the video was uploaded to Facebook.

If you can't see the video, here it is:

According to Malay Mail, it is believed that the incident occurred outside a restaurant in Singapore.

It is unclear what the cause of the argument was.

Another man had tried to calm the first man down, telling him: "That's enough, Aliff. Let's go."

But he continued his vulgar taunts.

Threw a chair and flashed his private parts

Things heated up when the first man threw a red chair at the man he was arguing with.

The first man came forward, attempting to start a brawl, but others stopped him.

At this point, he laughed and exclaimed in Malay: "Suck my d*ick."

He then unzipped his jeans, flashing his private parts as he yelled, yet again: "Suck my d*ck. Tell your boss to come down."

At the end of the video, he seemed to realise that he was being recorded, to which he said: "Eh, you don't record this."

Tired of his antics

Most of the comments shared the same sentiment— people were tired of him. Translation: "Aliff is stupid. Always causing a scene. As if he's so great. It gets tiring after a while. Don't be an artist with that kind of attitude. You should be a gangster instead. So trash. How can people still be a fan of him?"

Translation: "Looks handsome but has a bad attitude. Hmmm."

Translation: "A disgrace to society. He embarrasses Singaporeans. Luckily we have Hady Mirza, he makes us proud instead."

There were a few, however, who defended him and hope that he will change his attitude one day.

Translation: "You look good but why do you have a bad attitude? Come on Aliff, please change, you can do it."

Translation: "Hope he receives the right guidance in the future." 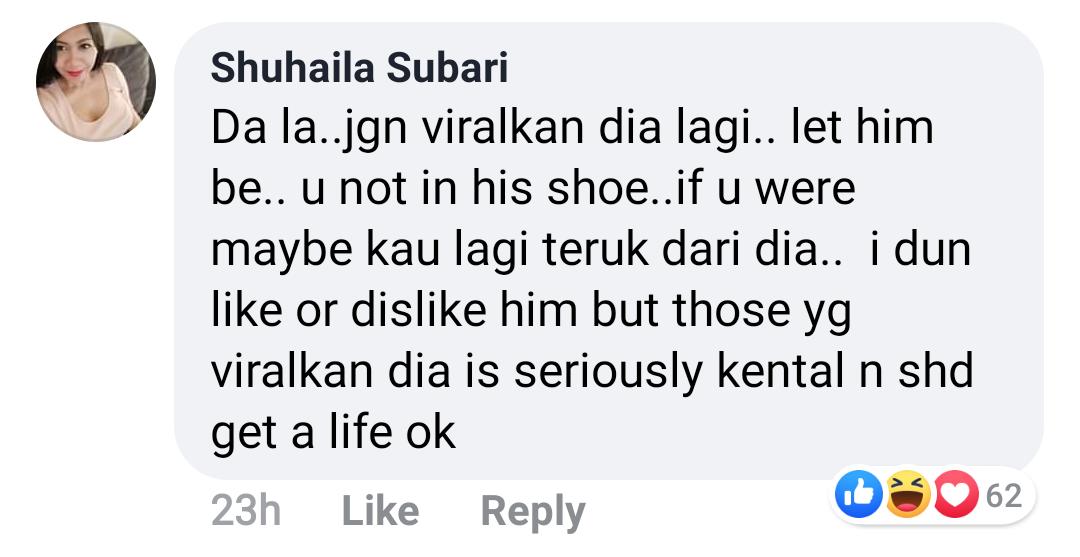 Translation: "Enough, let's not make this viral. Let him be. You're not in his shoes. If you were, maybe you would turn out worse than him. I don't like or dislike him but those who make his videos go viral are lame and should get a life ok."

Despite the buzz online, Aliff has not commented publicly on social media about the incident.