Platforms for giving away and receiving free things are great; you can Marie Kondo your stuff and find things you need, all while helping the environment by contributing to a circular economy.

Unfortunately, there will always be people eager to take advantage of these platforms.

The police announced in a statement on Dec. 30 that a 22-year-old woman had been arrested for her suspected involvement in a series of cheating cases on such a platform.

Mothership understands that the cheating took place in a Telegram channel where users give and receive items for free.

The channel, which has more than 4,000 subscribers at the time of writing, allows those looking to give away their belongings to share photos and details about the product.

They also have the ability to choose whether to give away the item via meet up or postage, which normally ranges from S$0.50 to S$3.

The woman, who went by the name "Christine", shared a number of photos of branded sports apparel, asking for only the cost of postage. 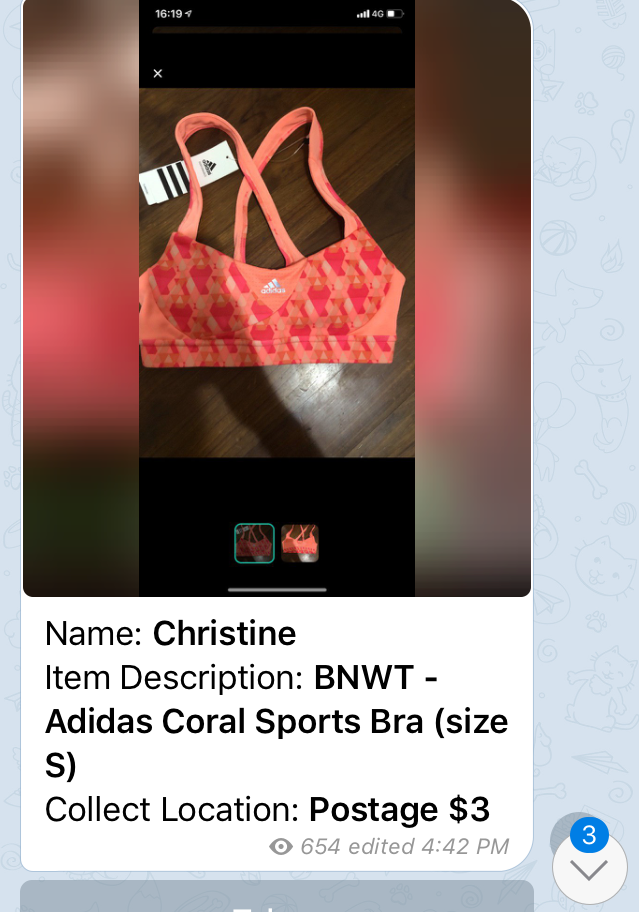 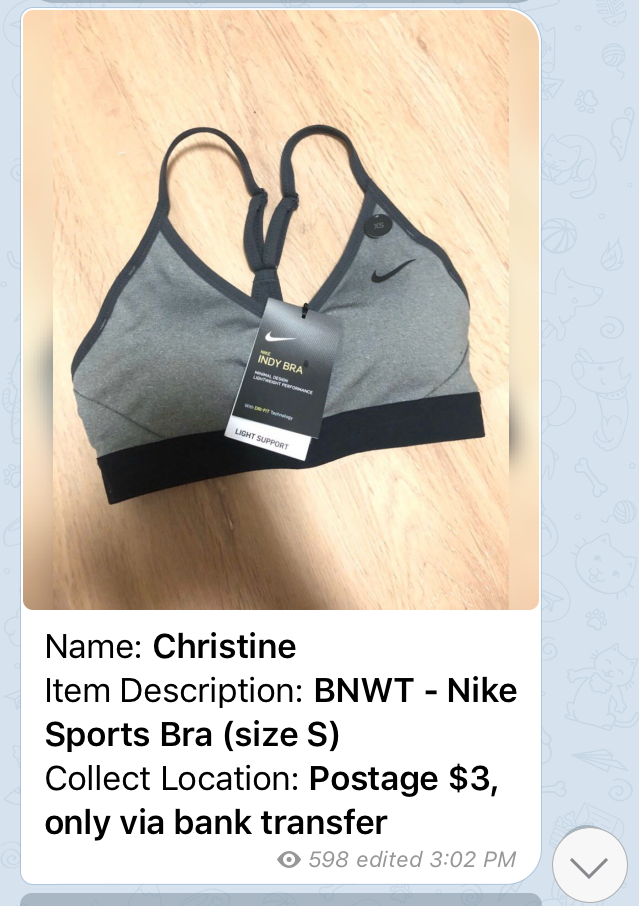 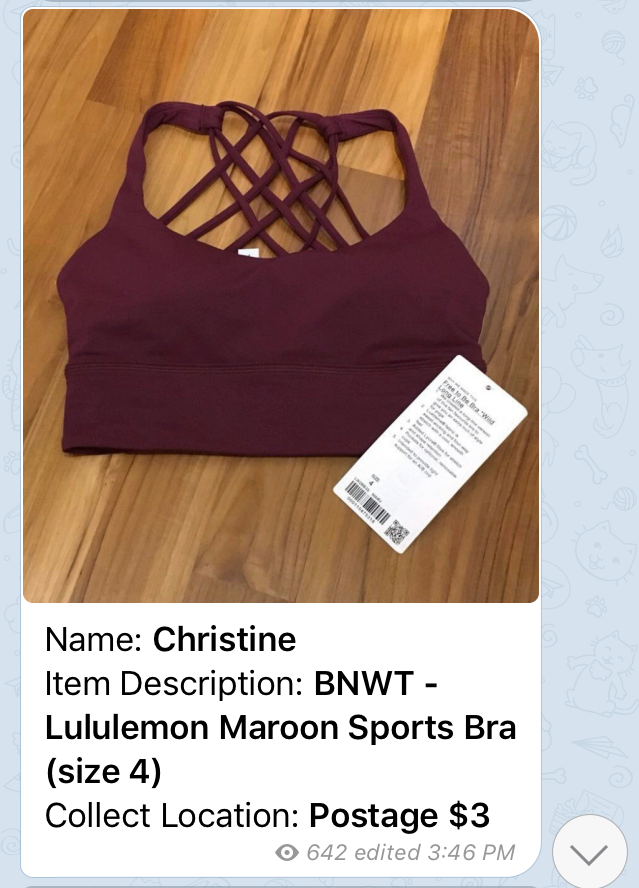 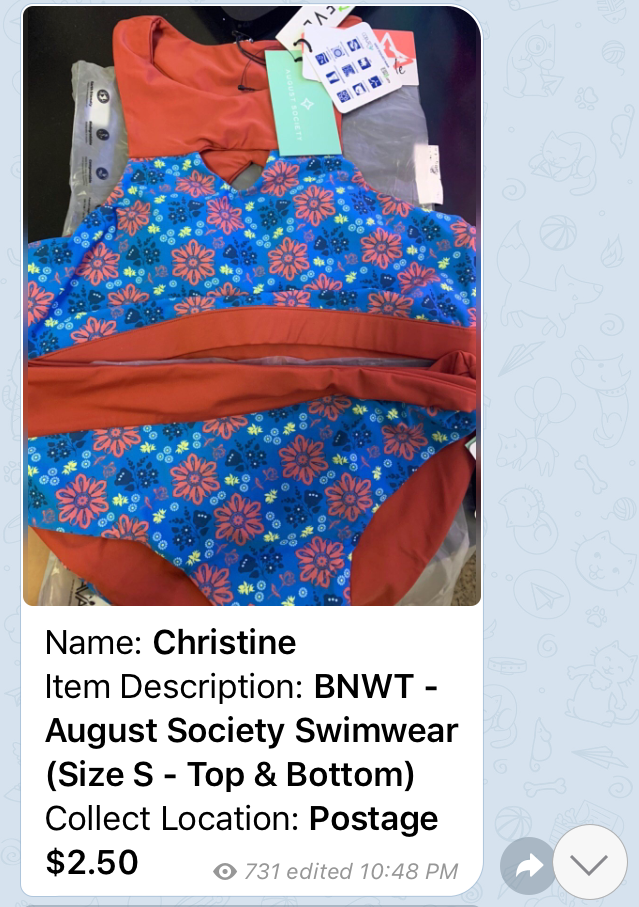 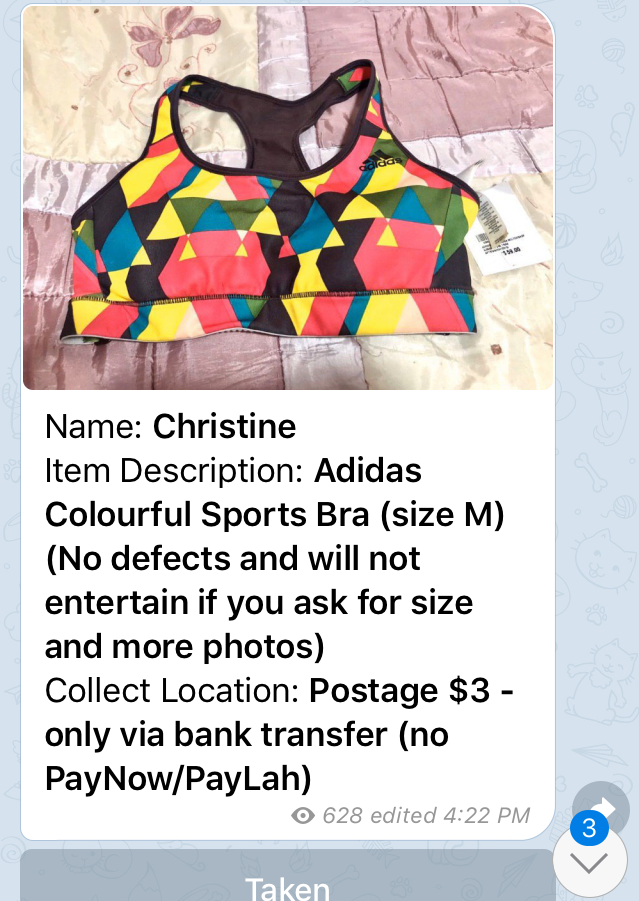 Did not receive items

However, most of the people who responded to her postings did not receive the items after paying her the postage fees.

In addition, she had deleted the chat history between her and almost all of the victims.

In a Telegram group that was formed after a Telegram user flagged the possible scam, alleged victims of the scam shared their conversations with "Christine", and identified other relevant information.

For one, they suspected that she had collected the postage fees from multiple people for the same products.

One woman in the group had already paid "Christine" for a set of swimwear, but "Christine" allegedly also collected payment for the same swimsuit from the woman's friend.

She shared screenshots of her conversation with "Christine" about that situation, in which "Christine" claimed to have two of the same product after being confronted: 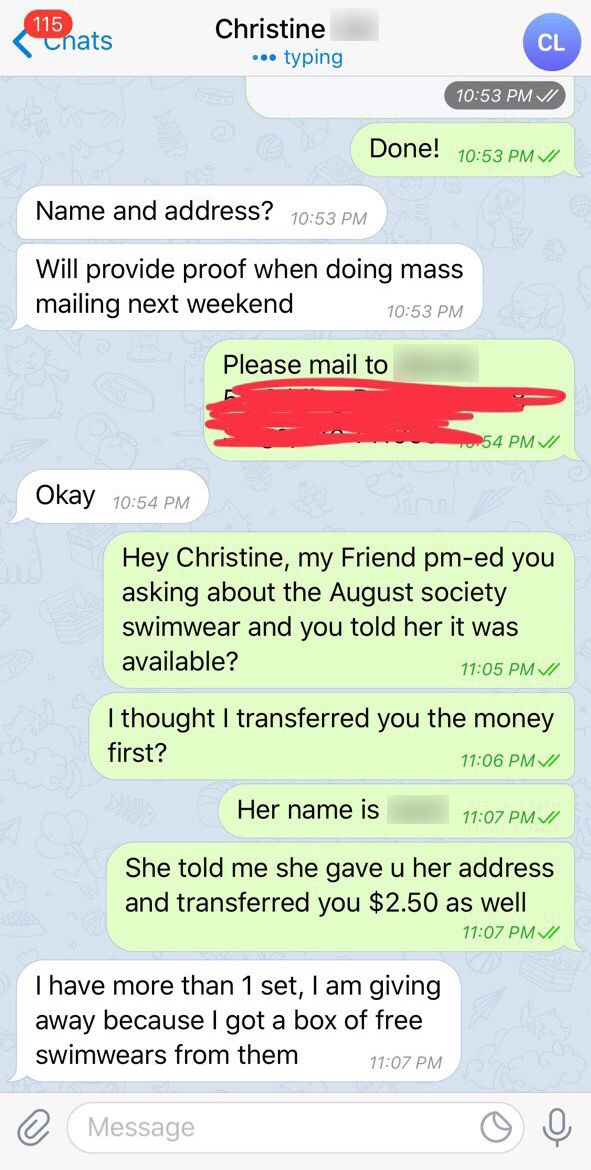 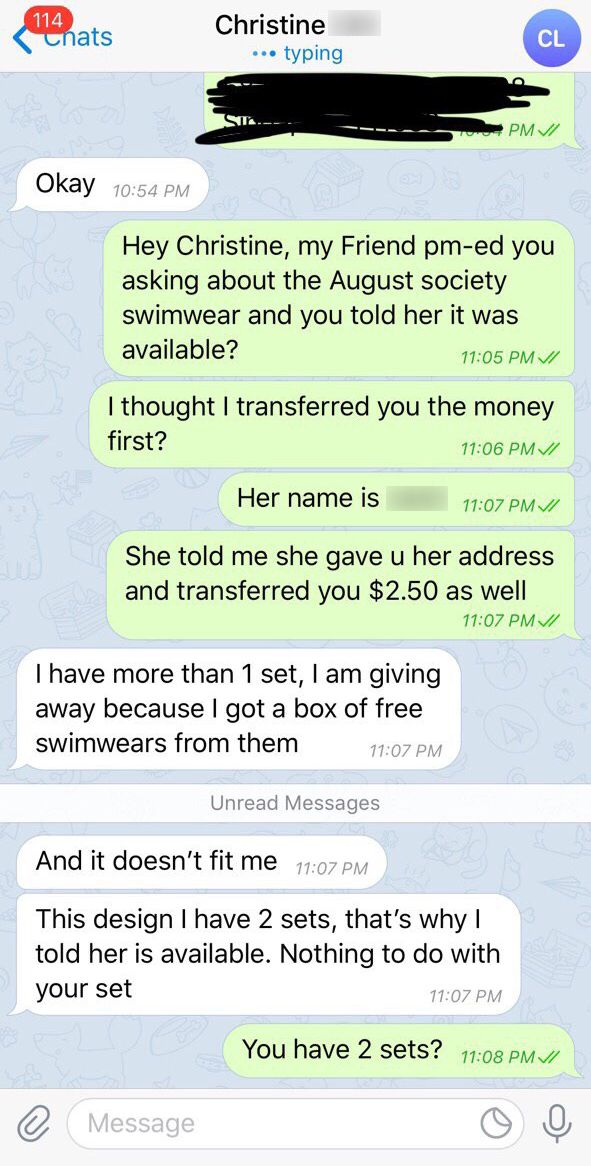 Another victim pointed out that the photo of one of the sports bras that "Christine" had posted had been taken from a Carousell posting by another user. 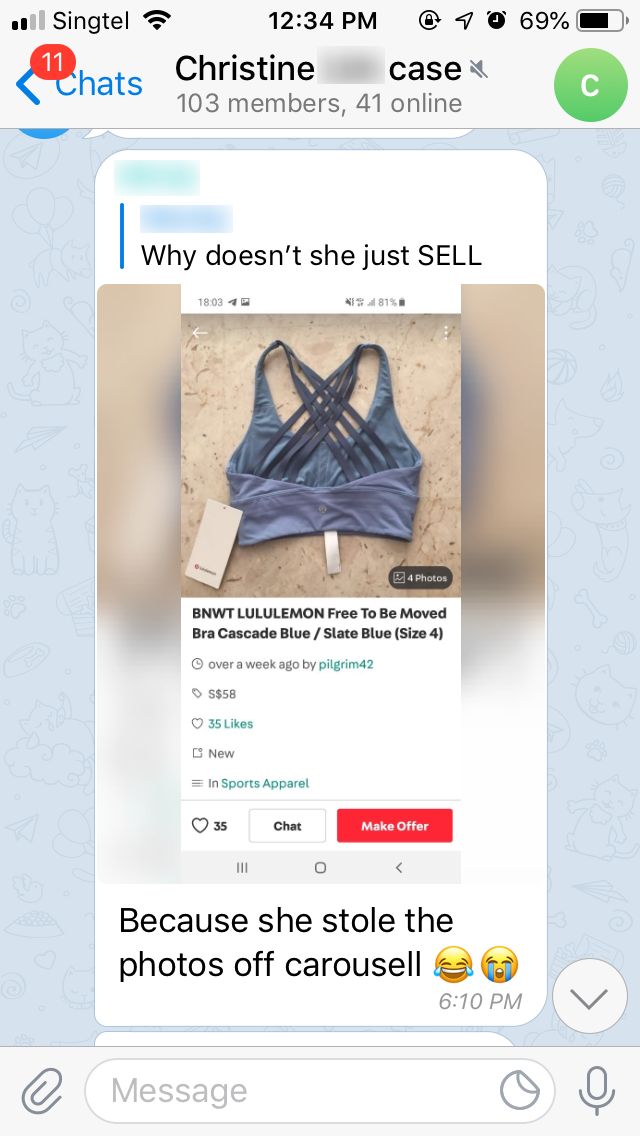 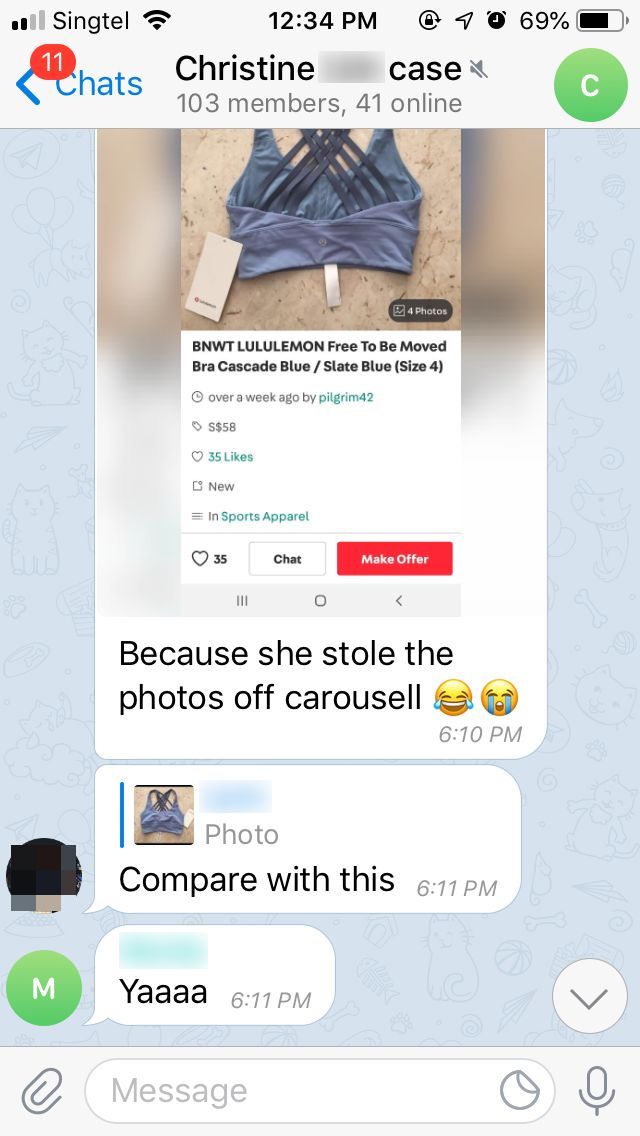 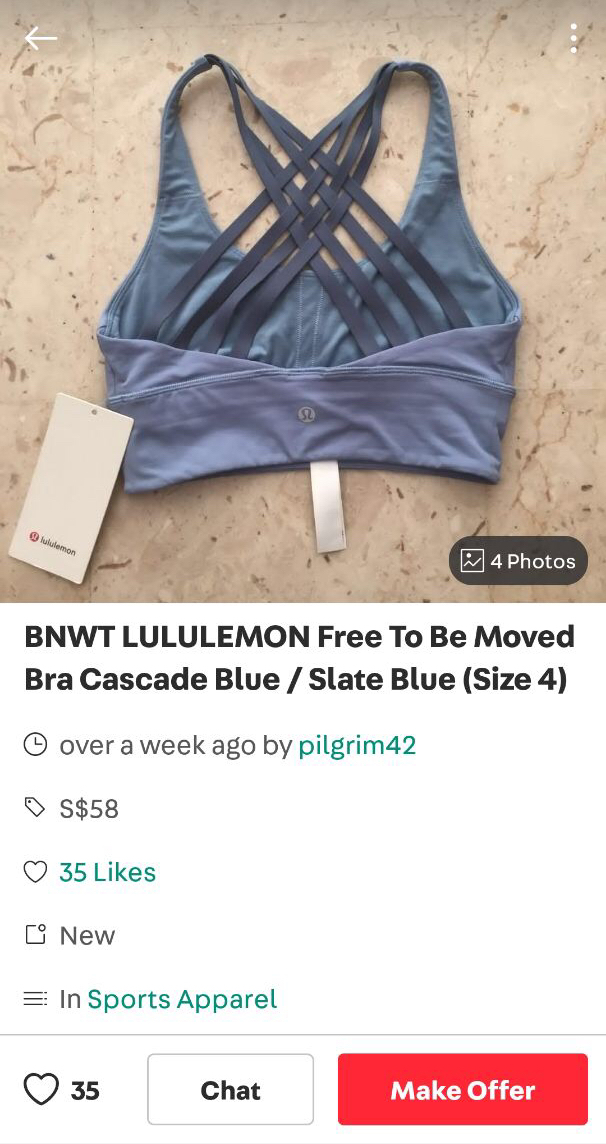 When the administrator of the original Telegram channel reached out to "Christine" about the complaints, "Christine" claimed that she had just been helping her friend post photos to the group, and did not realise that her friend had taken the photos from Carousell.

She also claimed that her friend would refund the people that she had taken postage fees from. 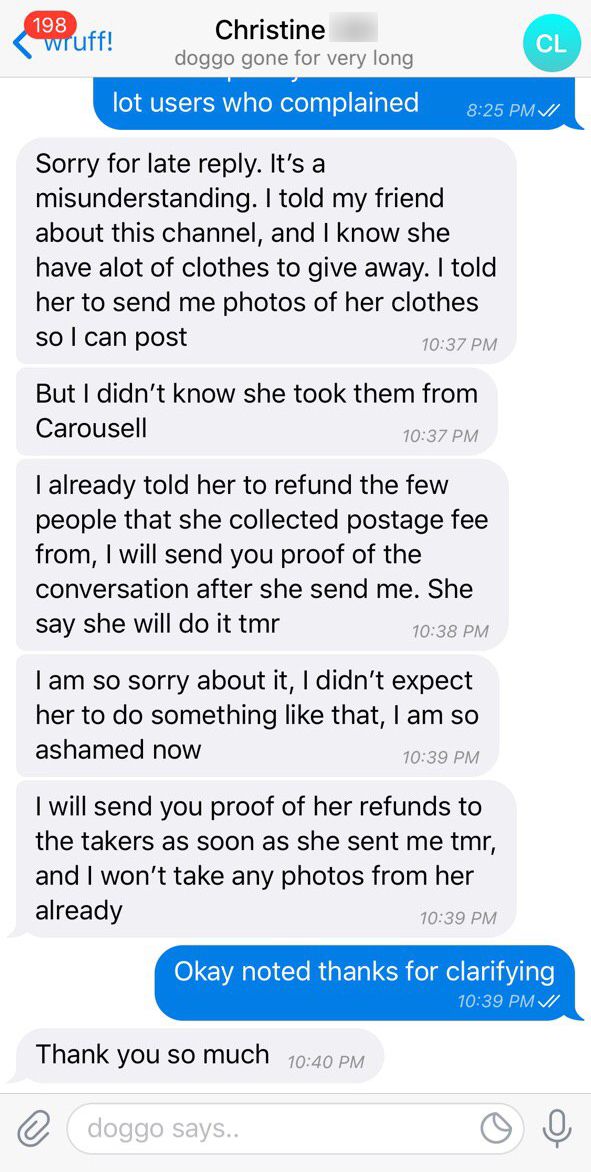 When another alleged victim, Ng, reached out via WhatsApp to the phone number that had been given to some other victims to pay via PayLah!, the person replying claimed to not be "Christine".

Rather, the person claimed to be someone who lived near "Christine", and added that they were just helping to coordinate payments for her, which was why the PayLah! number was hers.

When another victim, Kwek, sent a WhatsApp message to the same number under the pretext of being a group administrator, the person claimed to have met "Christine" crying at a void deck and thus offered to collect money via PayLah! and bank transfer for her.

When Kwek later asked the person how "Christine" was supposed to make money from giving things away for free, the person said that "Christine" would mark up the postage cost.

The person later came back to tell Kwek that they had allegedly filed a police report and had been instructed to block everyone who had contacted them and not give any refunds.

Appears to have cheated more than 60 people

According to a spreadsheet created by victims of "Christine"'s alleged scams, 65 people self-reported that they lost a total of S$383.60 to her.

The highest amount cheated from one person, according to the data, was S$30.

One alleged victim claimed to be a young mother of two who had just wanted to treat herself, but was instead scammed. 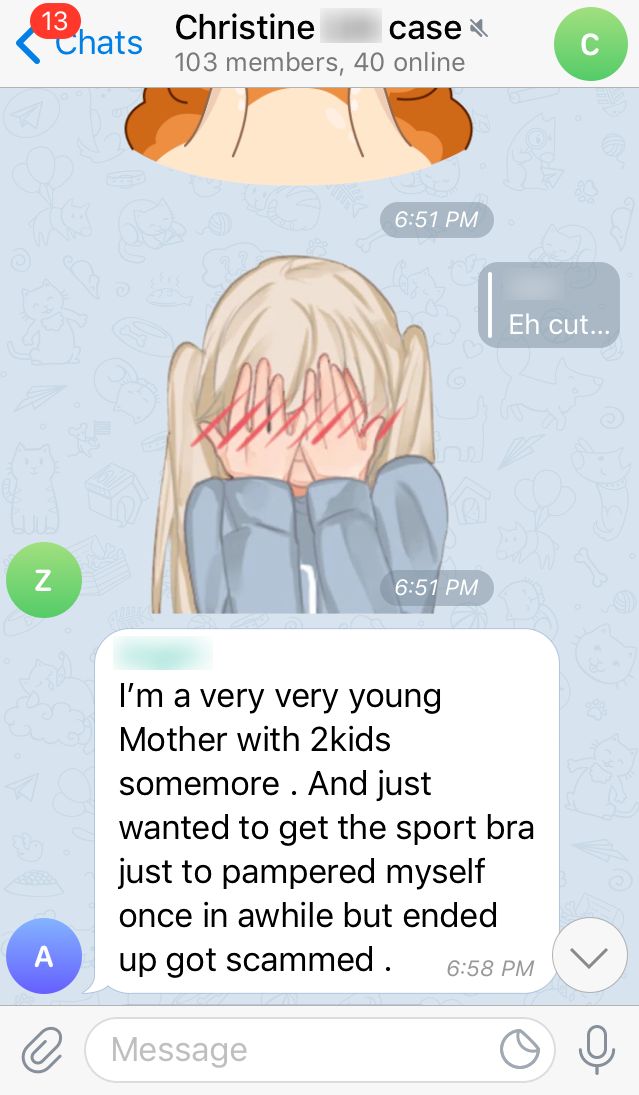 Police stated that several police reports were made, and that follow-up investigations resulted in a woman being arrested on Dec. 26 by officers from the Ang Mo Kio Police Division.

Those convicted of cheating under Section 420 of the Penal Code face a fine, as well as imprisonment of up to 10 years.

Top image compiled from photo by Christian Wiediger on Unsplash and image screen captured by author.