Fans of toys, games, and comics, you would know that the Singapore Comic Con (SGCC), previously known as the Singapore Toy, Game & Comic Convention is running this weekend from Dec. 7 to 8, 2019.

Apart from purchasing merchandise and the chance to meet world-renown comic creators and illustrators, the event also gives avid fans the opportunity to dress up as characters from their favourite comics.

Here are just a few examples of some of the cosplayers that we saw on the first day of SGCC: 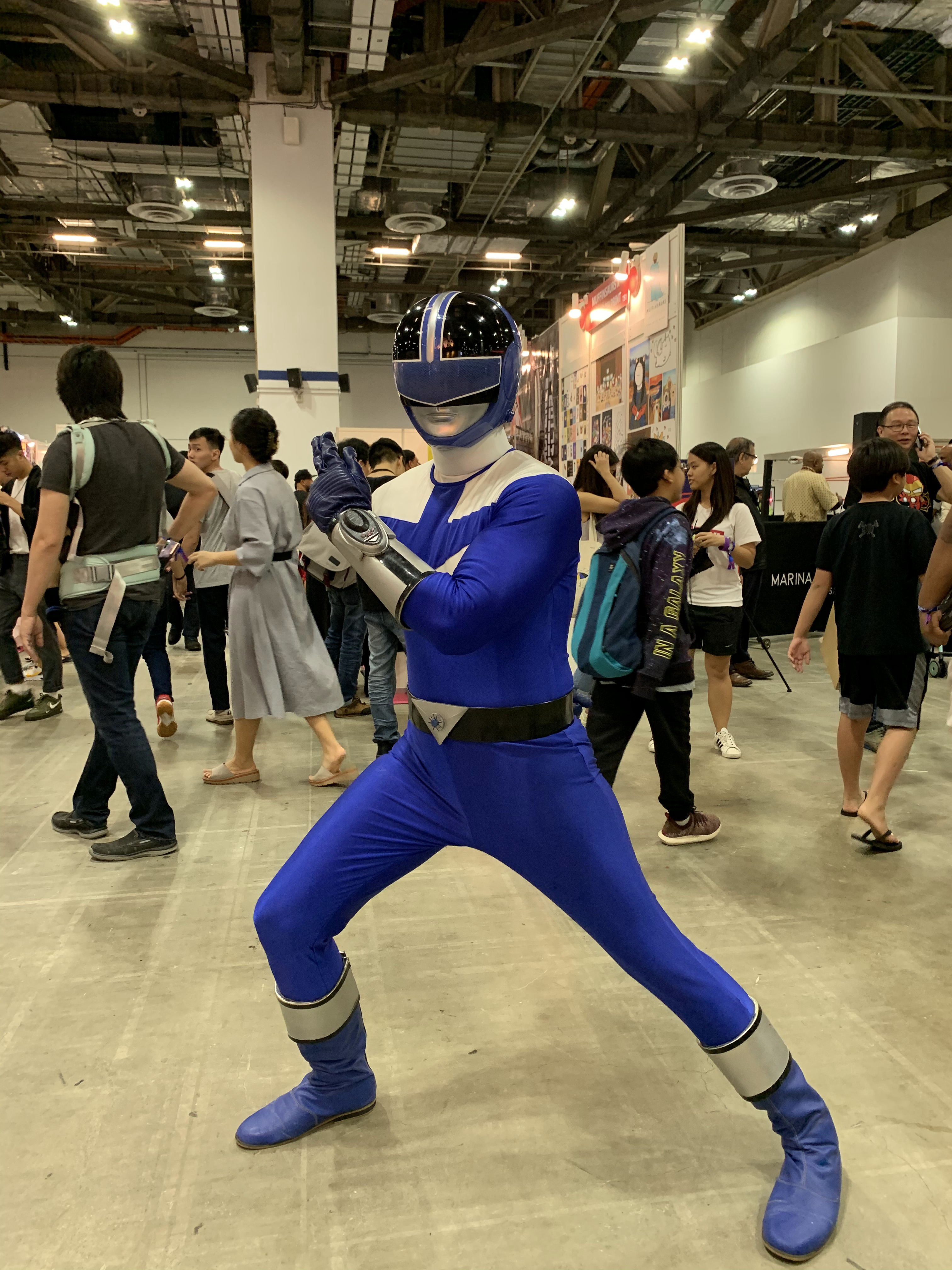 Which series is this Blue Ranger from?

The helmet costs close to S$600 and arrived two years after I ordered, it's quite in demand.

Where are your other ranger friends?

To be honest, I lost them somewhere in this hall. 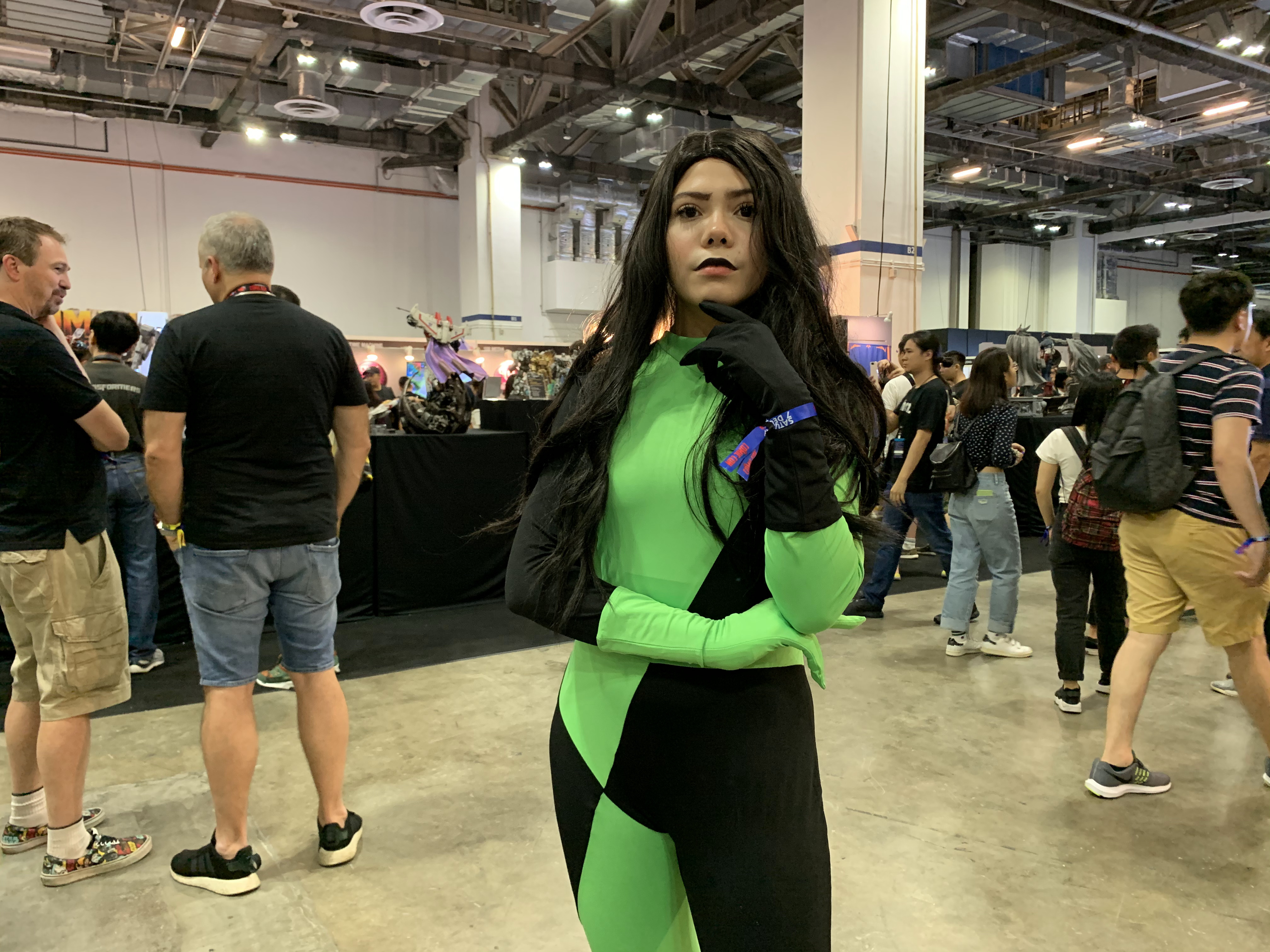 I'm cosplaying as Shego the villain from Kim Possible.

How much did you spend on your outfit?

I bought it from Taobao so it was only about S$50.

Did you come with Kim Possible?

I didn't want to bring her, I didn't even tell her I was coming. 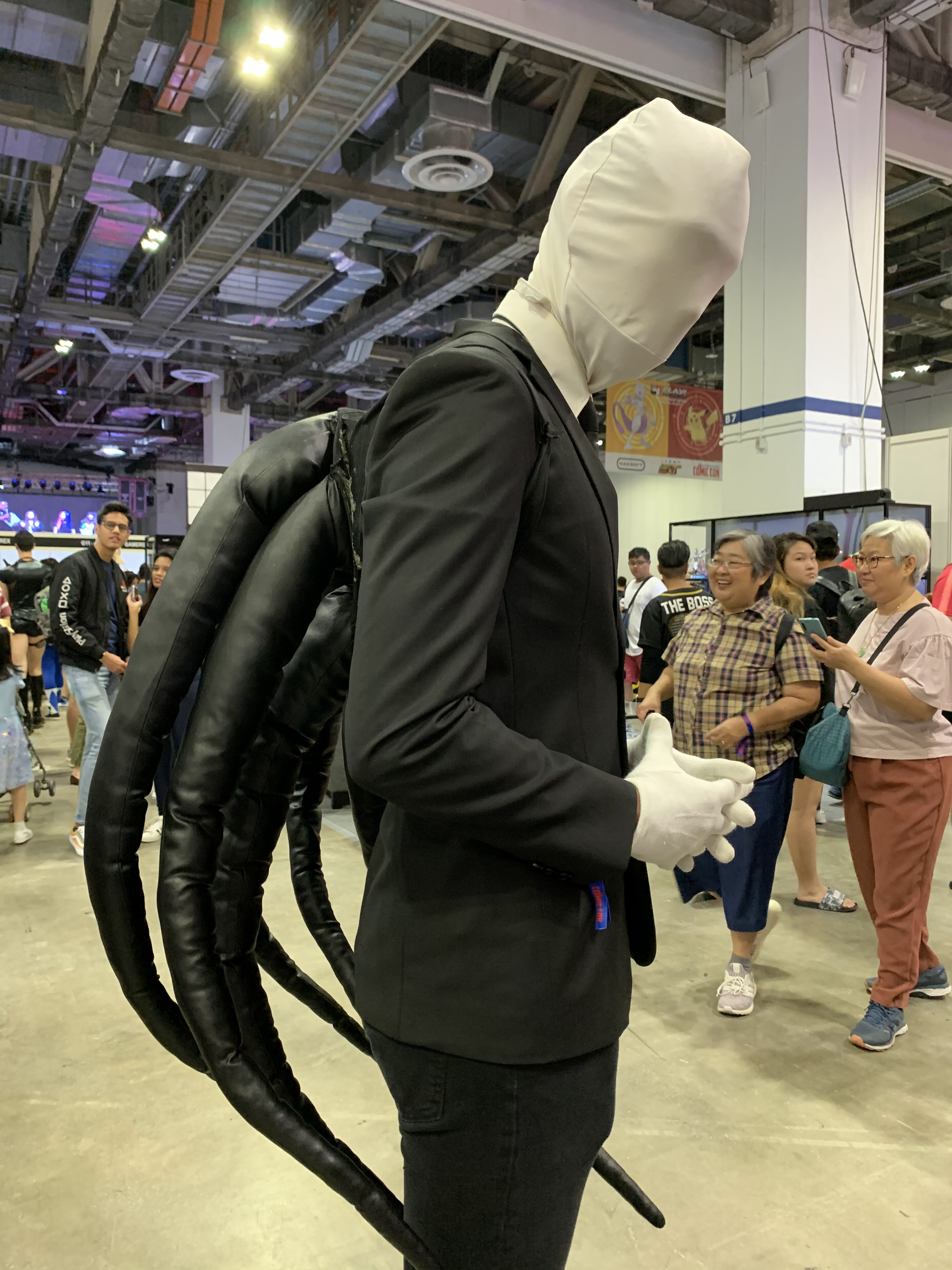 Did you make your own costume?

The tentacles were handmade, my friend and I stitched it onto my suit.

So how much did you spend?

Can you see through your costume?

Wait, is this your prom suit?

Felicia, 26, as The Riddler 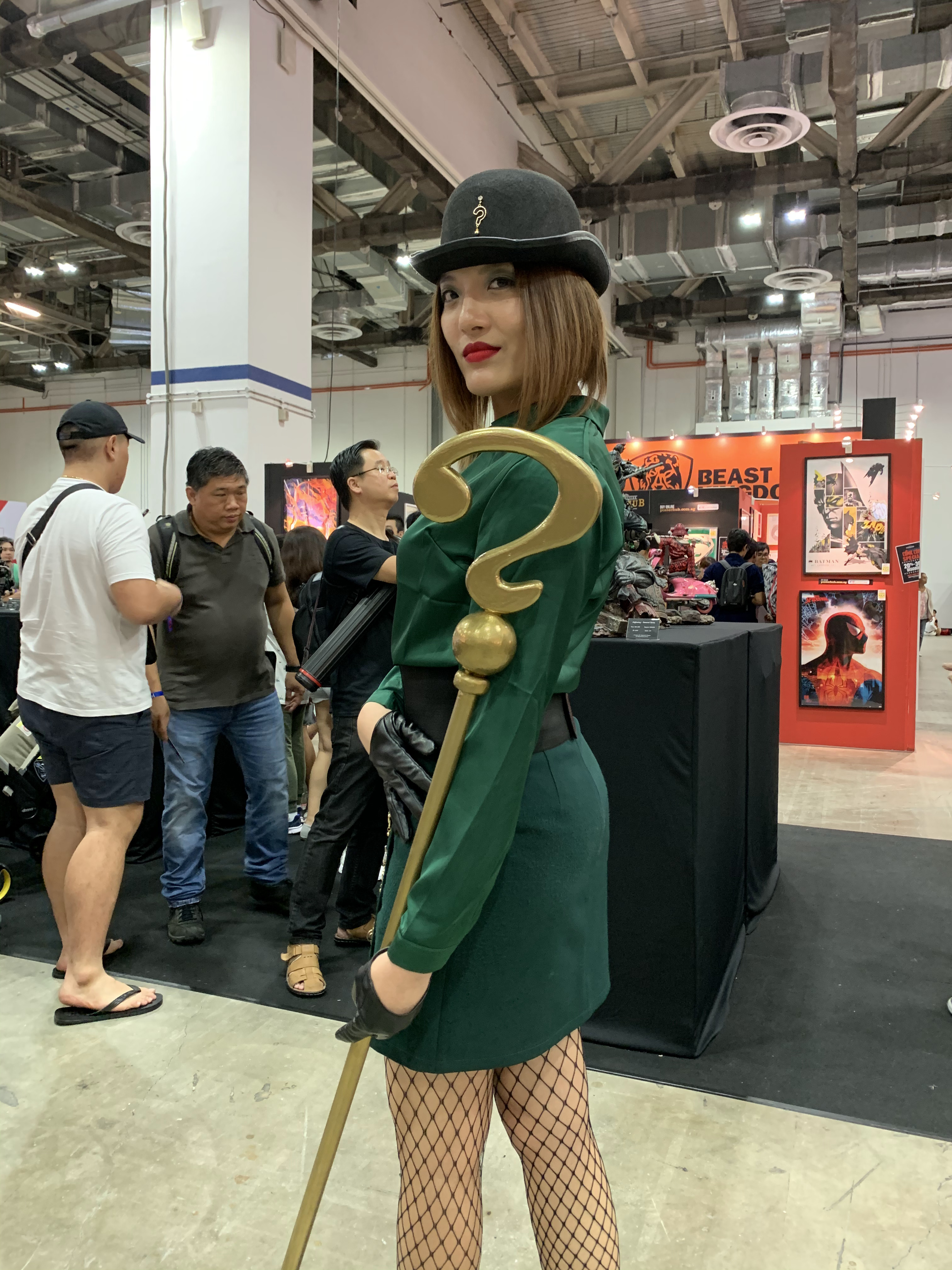 Did you make your outfit yourself?

No, but I made the cane from scratch.

It's entirely made of PVC and styrofoam. 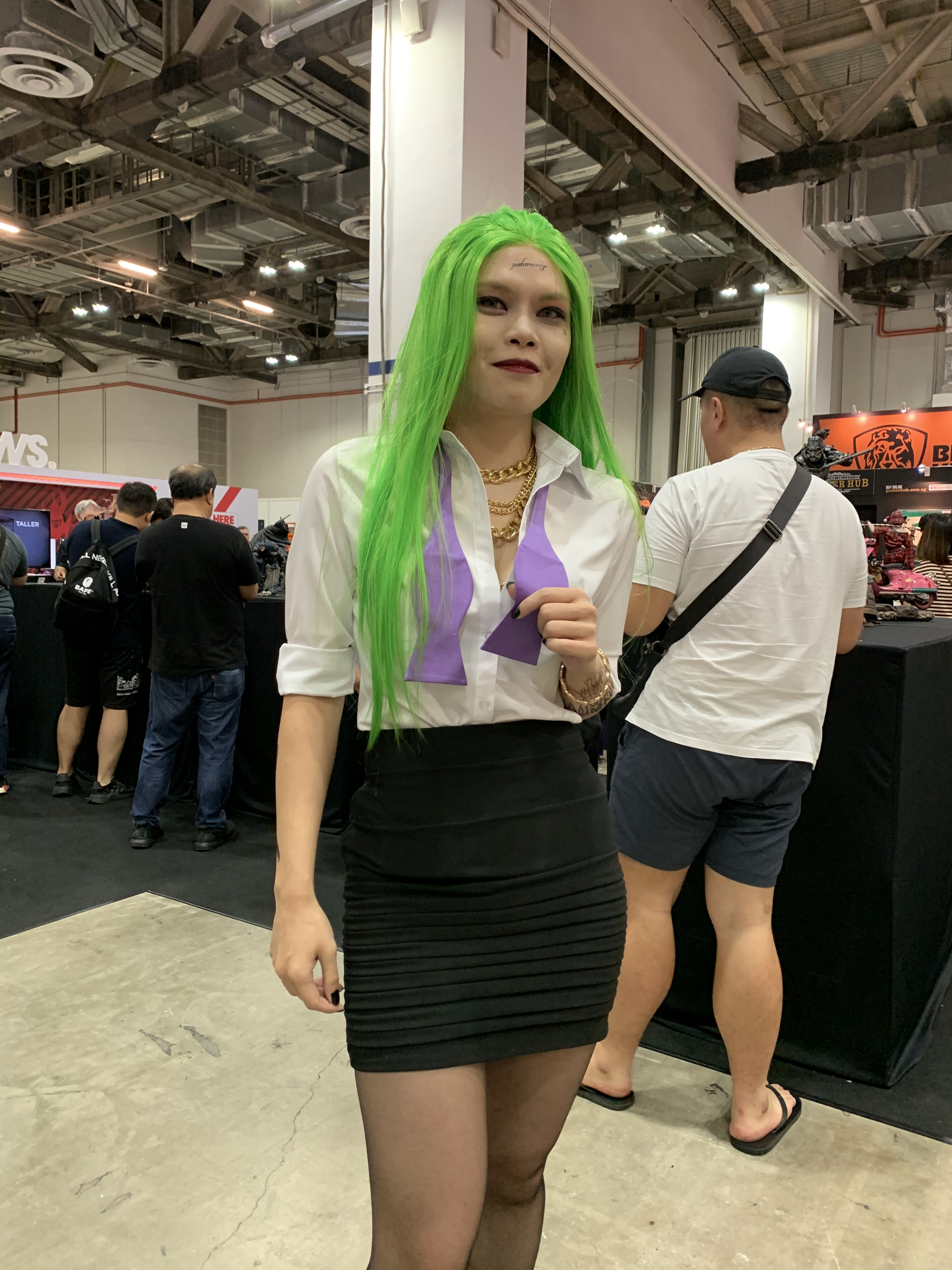 I'm the female version of Joker from the Suicide Squad.

How much did you spend on your outfit?

I spent about S$150 on AliExpress, Taobao and Shopee.

How long did it take to put together the whole outfit?

About three months, including shipping.

More hours were spent to pick the perfect pieces for the costume.

Today's our (The Riddler and her) off day so we're having fun at Comic Con. 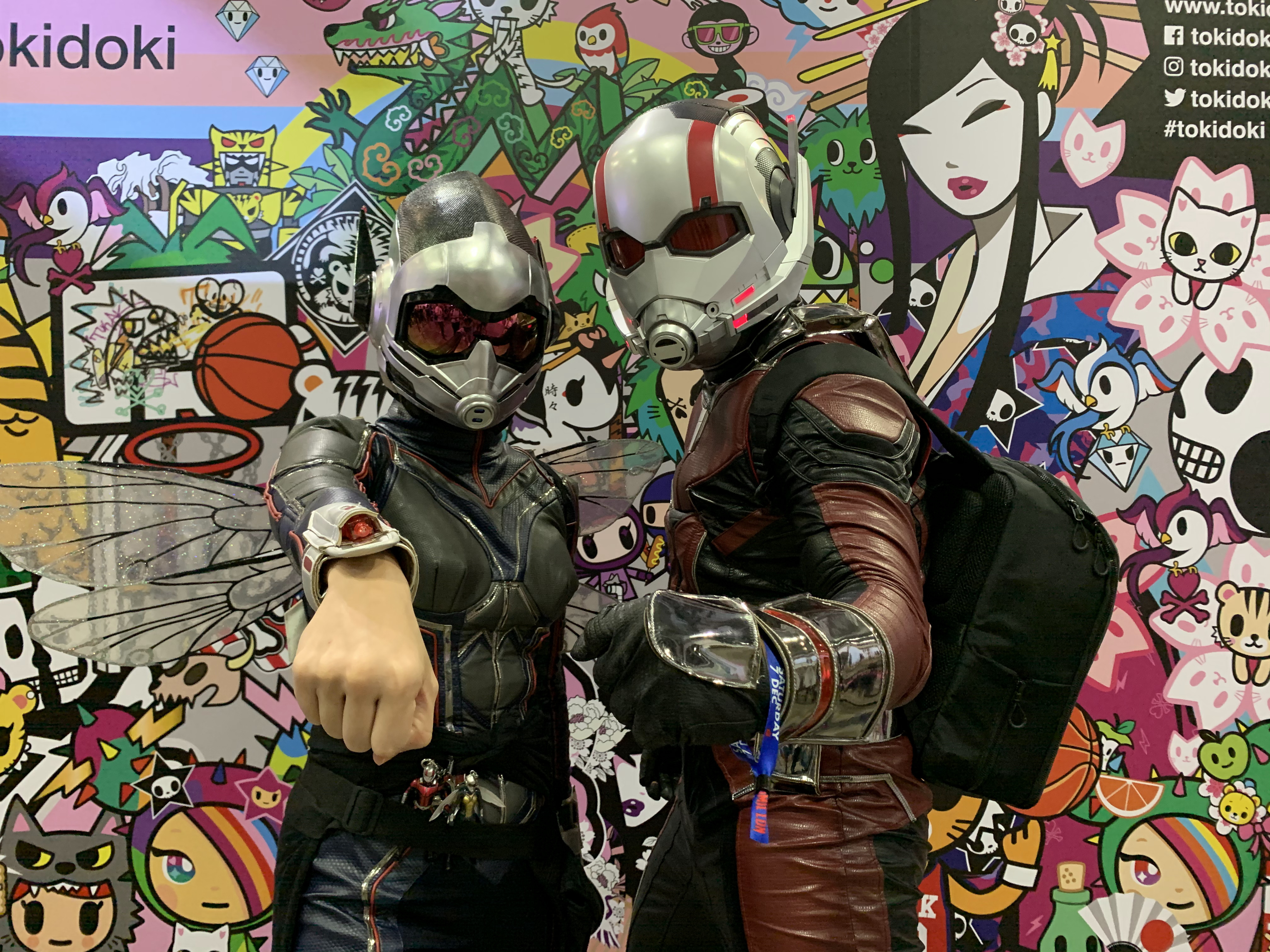 Did you make your own costumes?

We bought it online for about S$800, but we modified our helmets with special lenses.

It's actually a ski mask.

So where did you buy your materials?

We also bought the ski masks from Decathlon.

Do you always dress up together?

We are husband and wife, so we always dress up as a couple.

Previously we dressed up as Deadpool and Gwenpool and also Spider-Man and Spider-Gwen. 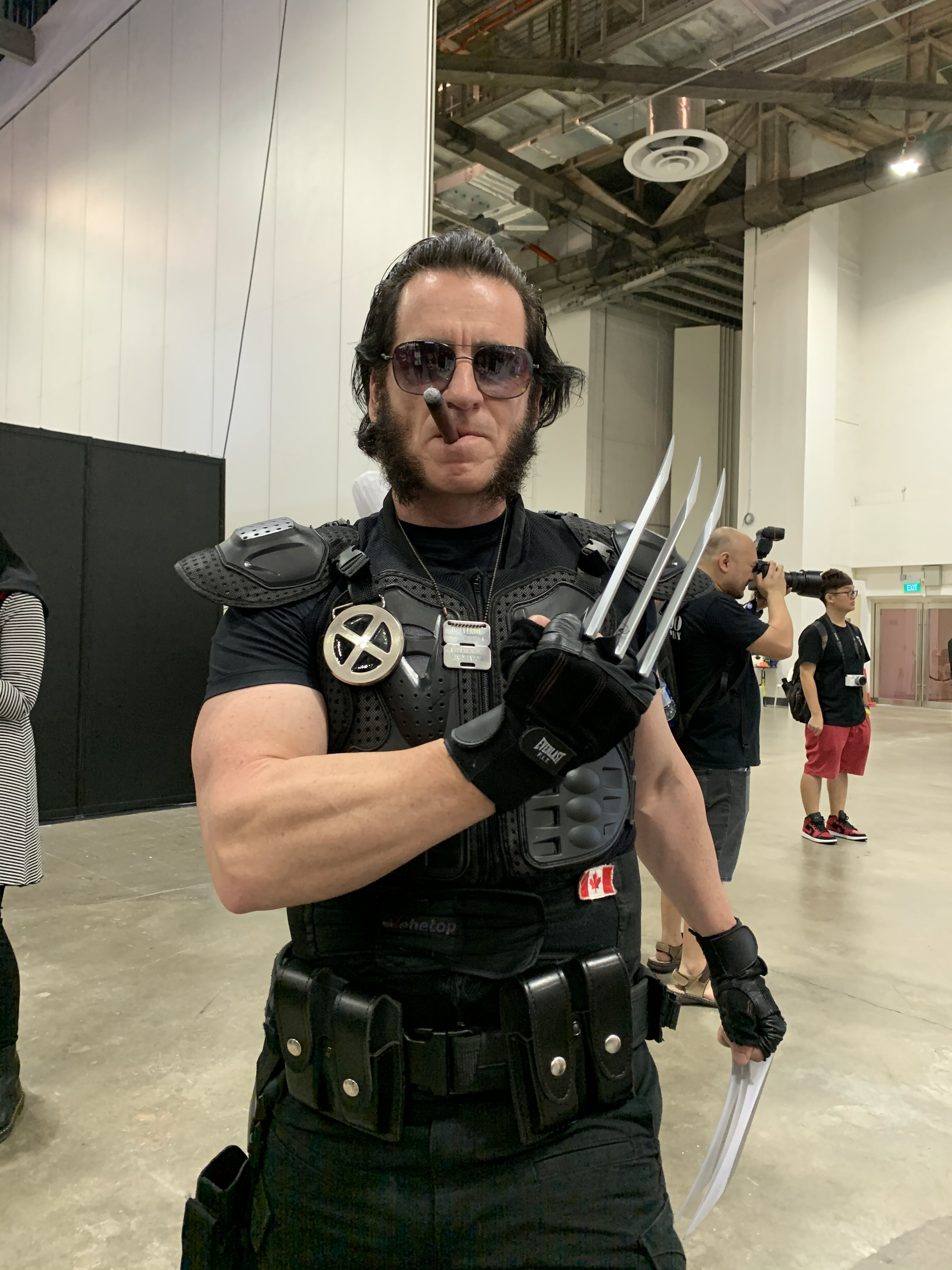 Who are you dressed up as?

I am cosplaying Wolverine from Ultimate Wolverine vs The Hulk.

Did you make your own costume?

The only things I made myself are my chops and my body.

What did you dress up as in previous comic cons?

Last time I dressed up as Logan with the white tank top but I put on a bit of weight this year so I'm hiding my weight in this costume.

I'm a one trick pony, I only do Wolverine. 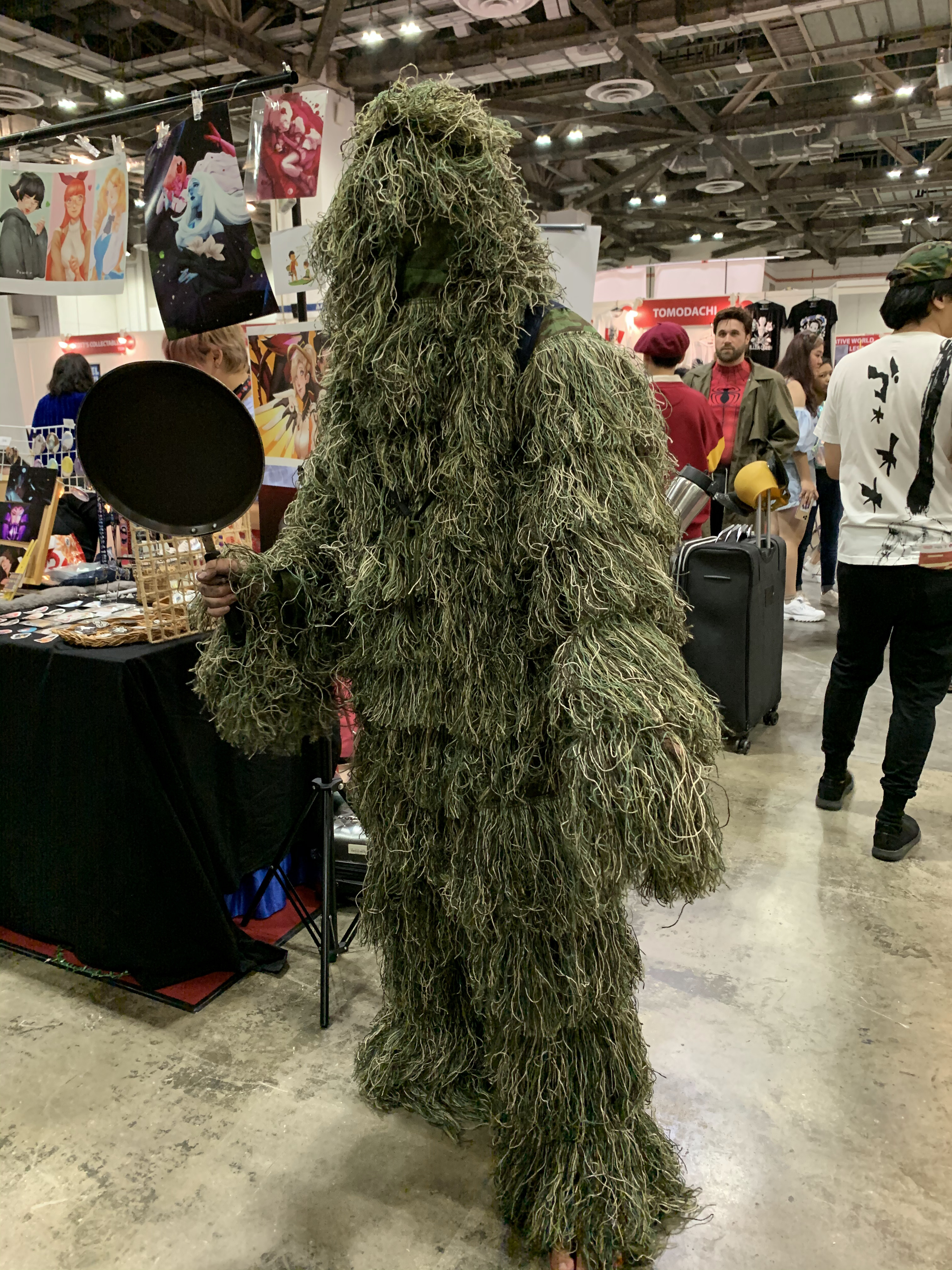 Why did you dress up as a ghillie suit from?

It's the ghillie suit from the mobile game PlayerUnknowns' Battlegrounds (PUBG).

I cannot dress up in the PUBG white uniform, so this ghillie suit fits my personality and style.

Where did you get your outfit from?

I bought the pan for S$50 from Little India.

Calvin & Cindy, both in their 30s, as Batman & Wonder Woman 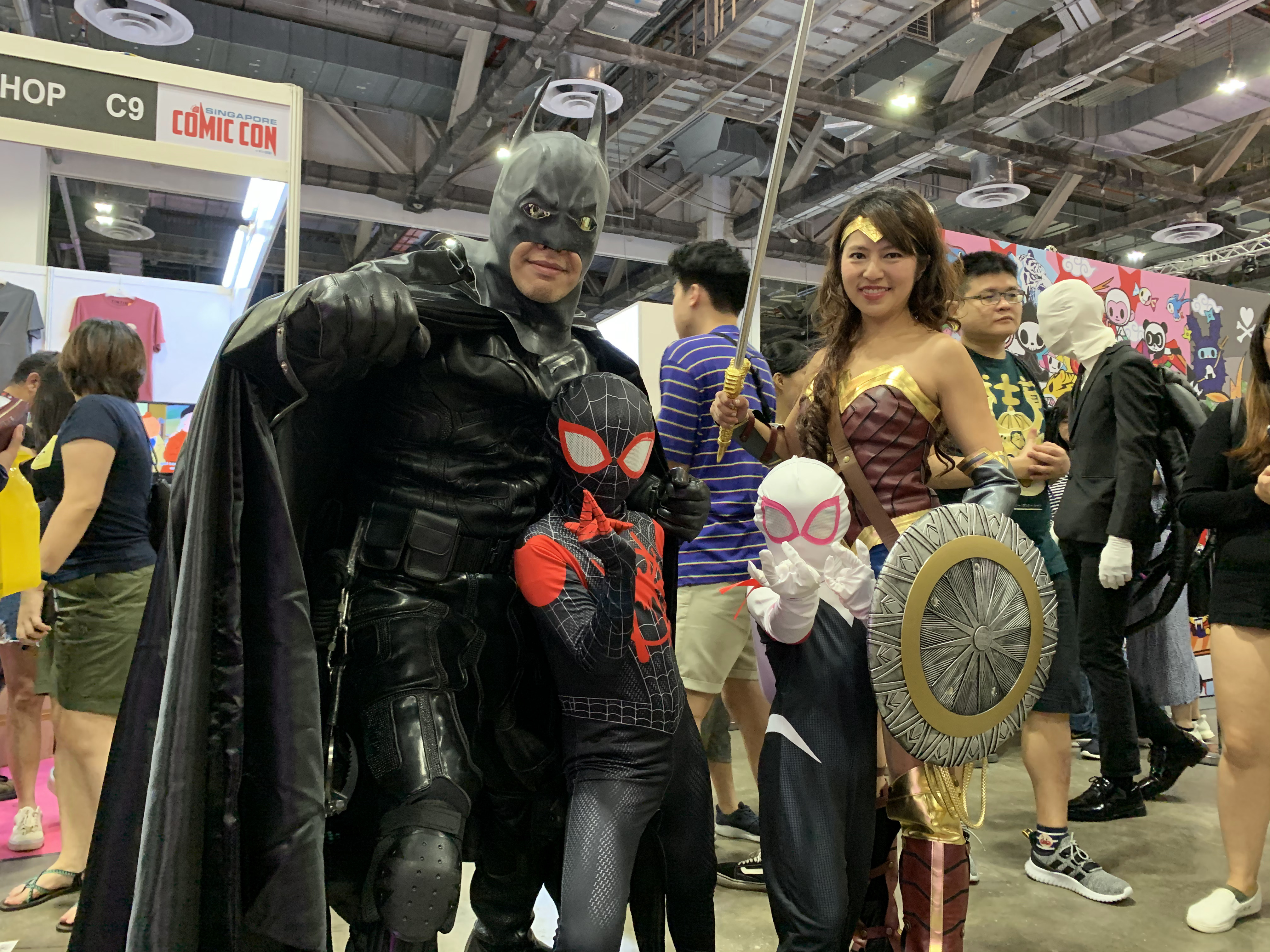 Where did you get the costumes from?

Cindy: No, it's probably less than that.

Calvin: Just this one (Batman) alone is S$600 already.

Cindy: Oh, I didn't know that!

Oh no, sorry! Is this your first time coming to SGCC as a family?

How did you DC Superheroes get Marvel babies?

I don't know, these Marvel heroes have their own minds. 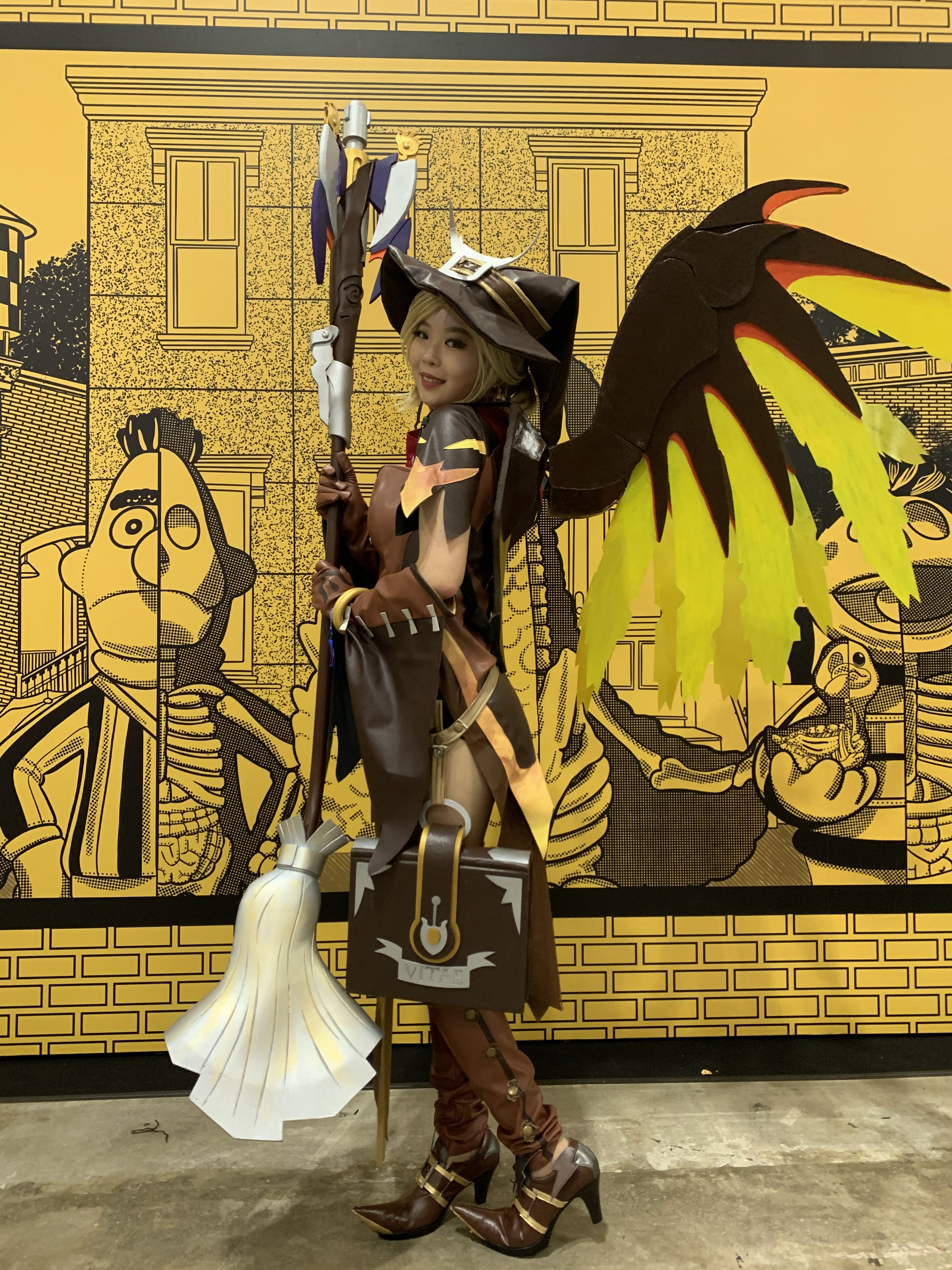 Who are you cosplaying?

I'm cosplaying the witch version of Mercy from Overwatch.

Where did you get your costume?

These are actually handmade, only the shoes are bought online.

How long did it take for you to put everything together?

It took me close to two months to piece everything together.

But getting into the outfit itself takes about two hours.

So how much did you spend?

Taobao saves lives and my wallet.

All photos by Rachel Ng