A 25-year-old Indonesian who sacrificed his life to protect church-goers from a bomb blast in 2000, has raised more than Rp 106 million (S$10,316), The Jakarta Post reports.

This fundraiser to honour the late Riyanto Banser was started by an anonymous Twitter account Katolik Garis Lucu on the Kitabisa crowdfunding platform, with the total funds raised exceeding its initial target of Rp 50 million (S$4,866).

In Indonesia, it is common for police, soldiers and members of Nahdlatul Ulama to help guard churches across the country during the Christmas period to caution against attacks by terrorists.

According to CNN Indonesia, Riyanto had told his mother, Katinem, that he and his friends intended to go to the mosque after guarding the church on Dec. 24, 2000.

At night, Katinem and Riyanto's brothers heard news that a bomb had exploded on Jalan Kartini Number 4 at Mojokerto City.

That was the address of the Eben Haezer Church which Riyanto had been patrolling with four other members from the NU youth wing on Christmas Eve.

Katinem initially didn't think Riyanto was affected by the explosion.

It was only when her husband, Sukarmin, came back home did Katinem start to worry.

He told her that there was no news of Riyanto after the explosion.

Later on, it was confirmed that Riyanto was a victim of the bomb blast that night.

Katinem also found out her son's colleague who served in the same church, Amir Sagianto, was hit by the explosion, but survived.

Just like Riyanto, Amir was also guarding the Eben Haezer Church on Dec. 24, 2000.

After arriving at the church, Amir said that they began to prepare to guard.

When the evening call to prayer rose, they broke their fast and took turns to perform the obligatory prayer.

At around 7:45pm, one of the congregants told Amir that there was a bag lying under a public telephone in front of the church.

Amir and Riyanto went to check the bag and were surprised that there were wires and nails in the bag.

One of the policemen who saw the bag realised it was a bomb and reflexively shouted: "Get down!"

The situation in the church was chaotic.

Riyanto hugs bomb and runs away with it, sacrificing himself

Amir remembered seeing Riyanto hugging the bomb and running away with it, getting it away from others.

"The bomb exploded, the road went dark, the situation was chaotic, I don't remember anything anymore," Amir said.

Based on the description of his colleagues, the explosion made Riyanto's body bounce as far as 30 metres from the point of explosion.

Amir was also rushed to the hospital. He suffered a torn wound on his head and was bleeding profusely.

Monetary assistance from President and church

While he was alive, Riyanto, who only had an elementary school education, was the backbone of his family.

After his death, Riyanto's younger brother Titik Sumarmi and their mother said that the family's economic condition was not stable.

Despite Riyanto's father being old and due to retire, he still had to pull a pedicab to support the family's living expenses.

Thankfully, the family managed to receive monetary help from a number of parties.

Katinem mentioned that she had received Rp 10 million (S$972) from the fourth President of the Republic of Indonesia, Abdurrahman Wahid alias Gus Dur.

However, once Gus Dur stepped down from the presidency due to the impeachment of the MPR in 2001, the family no longer received any government assistance.

Rudy Sanusi Widjaja, the pastor of the Eben Haezer Church, said that his party provided compensation in the form of educational scholarships to one of Riyanto's younger brothers, Partini.

Although Rudy stated that the assistance provided by his party was not comparable to what Riyanto had sacrificed, he hoped, in a way, that what he had given would ease the burden on the family.

"Today is the 15th day of fundraising for Riyanto and friends. We will hand over the money raised at St. Joseph Catholic Church in Mojokerto on Sunday. We are currently organising it with all related parties. Thank you for all of your participation."

Since the fundraiser concluded, Indonesian netizens have come forth to laud the donation initiative and praise Riyanto for his sacrifice. Translation: "Thank you, friend. You have brought justice to our brother." 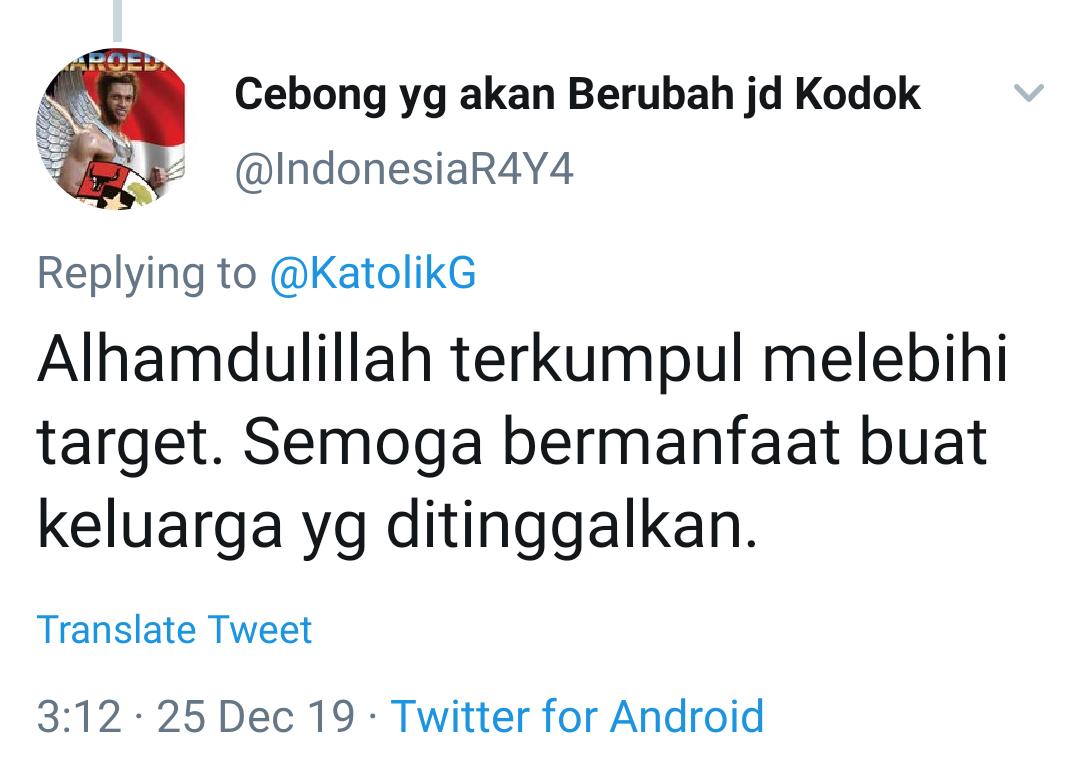 Translation: "Very thankful that we collected more than the target. Hope this can benefit the victim's family." Translation: "Hate will only lead to vengeance. But love and sincerity will live forever. Thank you all." 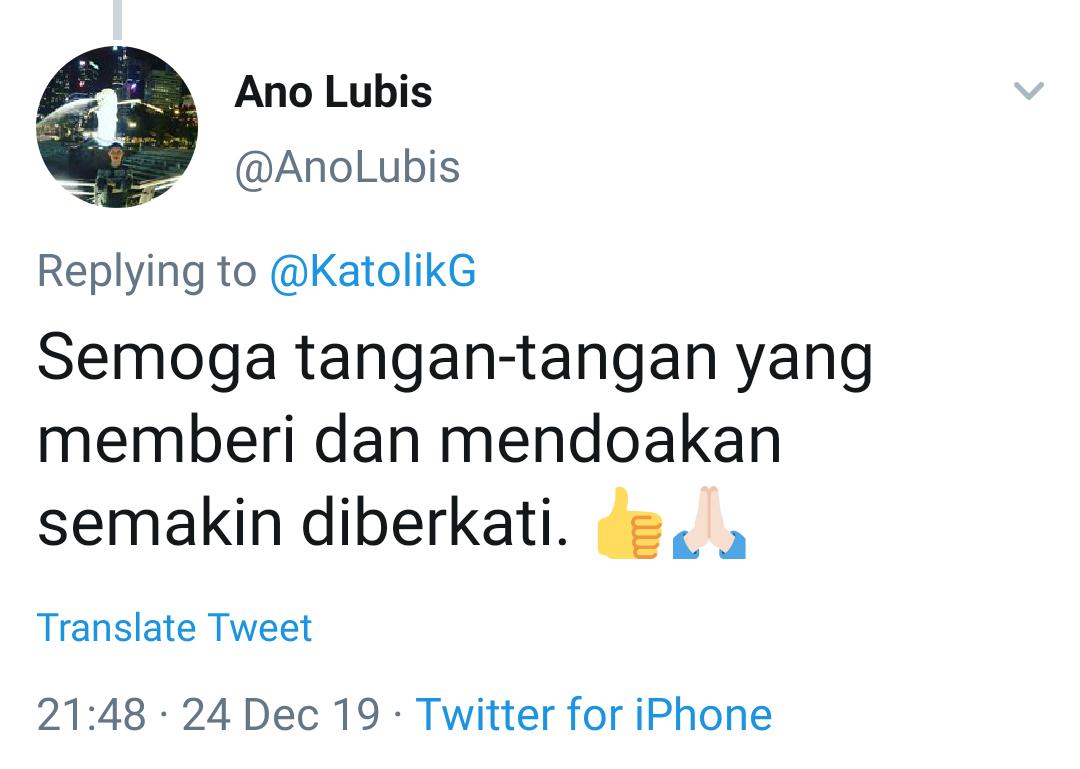 Translation: "Hopefully those who have donated and offered their prayers will be blessed." 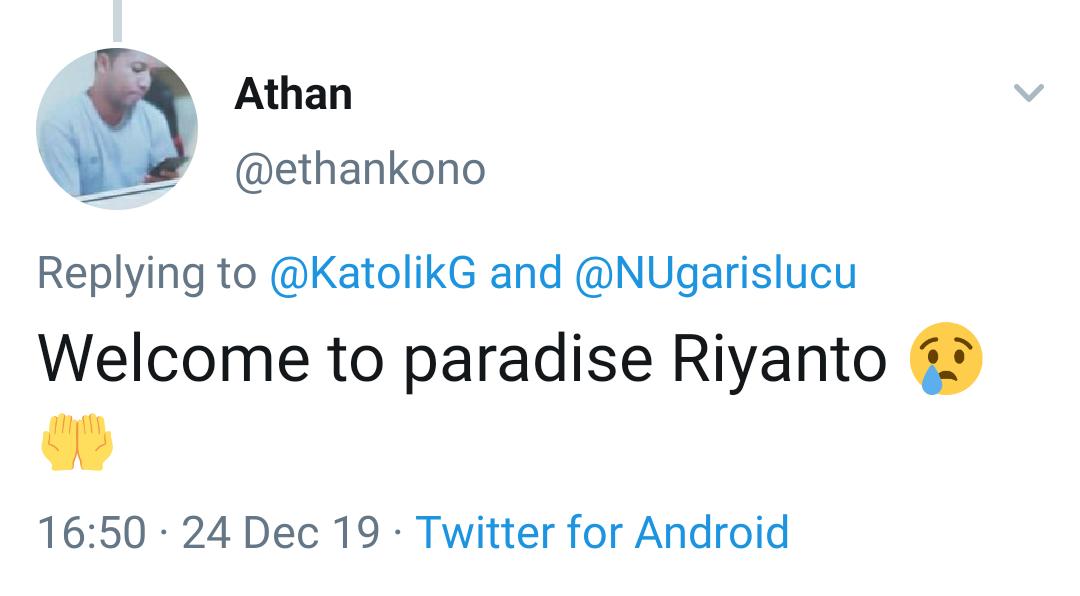