Peter Neo, 54, is a celebrity chef in Singapore.

His face might appear familiar as he often appears on Channel 8 programmes where he demonstrates his superb cooking skills.

As a testament to his status as a “celebrity chef”, he even rubs shoulders with local celebrities who frequent his restaurant Gustoso Ristorante Italiano, which he opened in September 2018. Located at Seletar Hills Estate, the restaurant gives off cosy, family-friendly vibes, much like the food that Neo serves. 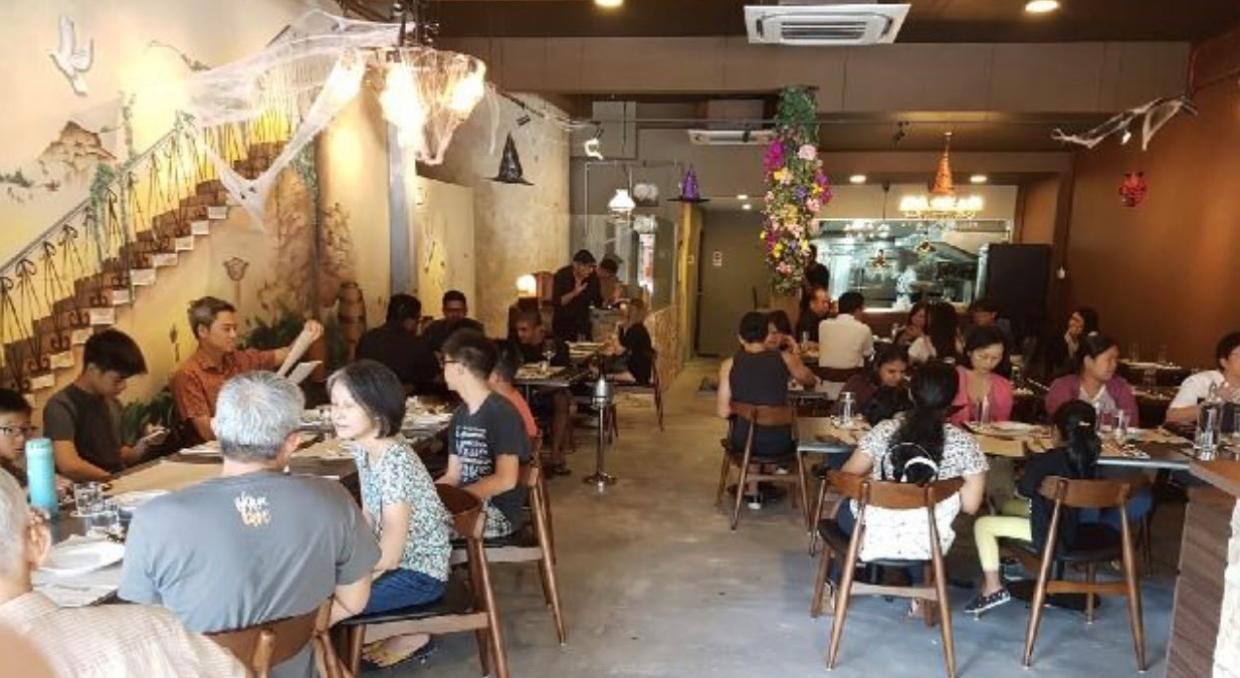 Loves pineapples on his pizzas

Being a chef with more than 36 years of experience under his belt, Neo can’t help but give his recommendations for what he thinks is a good piece of pizza.

While he doesn’t mind making pizzas with a thicker crust for customers who request it, Neo said he still prefers the thin crust as it doesn’t feel too heavy, and there’s less carb intake as well.

As for the toppings, he recommends a “four cheese” pizza for those who might want to go meatless.

“This won’t make you feel guilty, and it feels so light and tasty,” he tells Mothership.

Oh, and by the way, Neo is all for having pineapples on pizzas.

In fact, he gets many requests from parents to add the controversial topping for their children as it adds vitamins and nutrients to their food.

Tortelloni is his favourite Italian dish

But Neo said his favourite Italian food is handmade tortelloni, which is a common northern Italian stuffed pasta with cheese and leaf vegetables.

“It can be done with creamy cheese sauce or tomato sauce with a touch of dried parma ham and shaved parmigiano cheese,” he said, his voice brimming with enthusiasm.

But as much as he loves tortelloni, there is another Italian dish that Neo wishes more Singaporeans would know of, and that is a lampredotto ciabatta.

The dish, which is cooked using a cow’s stomach, is simple enough, but requires a bit of time to complete as it is slow cooked with onions, tomatoes, parsley.

While he only had the Florentine specialty once -- he says the texture is similar to tender roast beef -- the taste was so remarkable he could still remember the dish to this day.

A self-confessed foodie, Neo says he never really had a bad meal in Italy, unless he counts the time he had a pizza with toppings that tasted sour in a Venice food alley.

“But it might have been because of the cheese,” he said with a laugh.

Having decades of experience in the kitchen -- he first started out as a kitchen help at a hawker centre when he was 16 years old -- Neo confessed he still gets asked from time to time why he chose to specialise in Italian cuisine “despite” being an ethnic Chinese.

“I’ve been doing local food since young, but I wished to create something new, fresh and romantic for my customers,” he explained.

“During my time, many people liked going to Italy, which was why when the opportunity came, I went there as well and ended up falling in love with the culture, their music, and especially their food,” he added.

“Since then, I love whipping up Italian dishes.”

But that’s not to say he can’t cook up a mean pot of bak kut teh, Hokkien prawn mee, or char kway teow -- he even opened a bak kut teh place in the past.

Neo enjoys cooking for his parents too, who prefer local food. He is often the designated chef during Chinese New Year gatherings.

Children influenced by his passion

But that may start to change in the future.

Neo’s passion for cooking has rubbed off on his children -- his 15-year-old son has shown an interest in the industry, and counts spaghetti aglio e olio as one of his specialties.

Despite knowing the challenges that come with being a chef and owning a restaurant -- Neo often had to sacrifice his family time when it comes to work -- he said he wouldn’t stop his children from making cooking their careers when they become older.

This is because he knows the joy that comes with seeing his customers’ faces light up when biting into his creation, as well as creating a place with “good food, a nice ambience and good music” for his customers.

He said: “Being a chef, passion is the key to bringing amazing food to more people.”

Running a restaurant has its downsides, but it’s still worth it

But of course, as Neo puts it, “not every day is a Friday”, and sometimes he runs into demanding customers as well.

“We do meet cases where we need to give our customers extra attention and care,” he said.

Nevertheless, it is rare he comes across such customers, saying perhaps he meets one “once every six months”.

Fortunately, he also never had to throw any customer out his restaurant before.

In fact, most of Neo’s customers are “understanding and supportive” towards him.

Some of them are loyal customers who have been with him for more than 10 years -- Neo has helmed various Italian establishments in the past, such as Burno’s, Blend It Up, Cacio e Pepe, as well as his namesake Pietro.

To thank them for their support, Neo said he waives their corkage fee, and is open to customising his dishes to suit their needs and preferences.

Dining at an Italian restaurant need not be pricey

But for regular customers -- he is now receiving more new customers after he started partnering with discounted restaurant reservation app, Eatigo -- Neo is rather generous too.

Making use of Eatigo, a reservation platform that offers time-based discounts across more than 650 restaurants across the island, customers can get as much as 50 percent off on certain mains, such as the Australian Meltique Rib Eye, Spaghetti Vongole, Homemade Gnocchi Stewed Beef and more.

Not a bad deal at all.

Customers can just simply download the app, and reserve a timeslot with the desired discount. 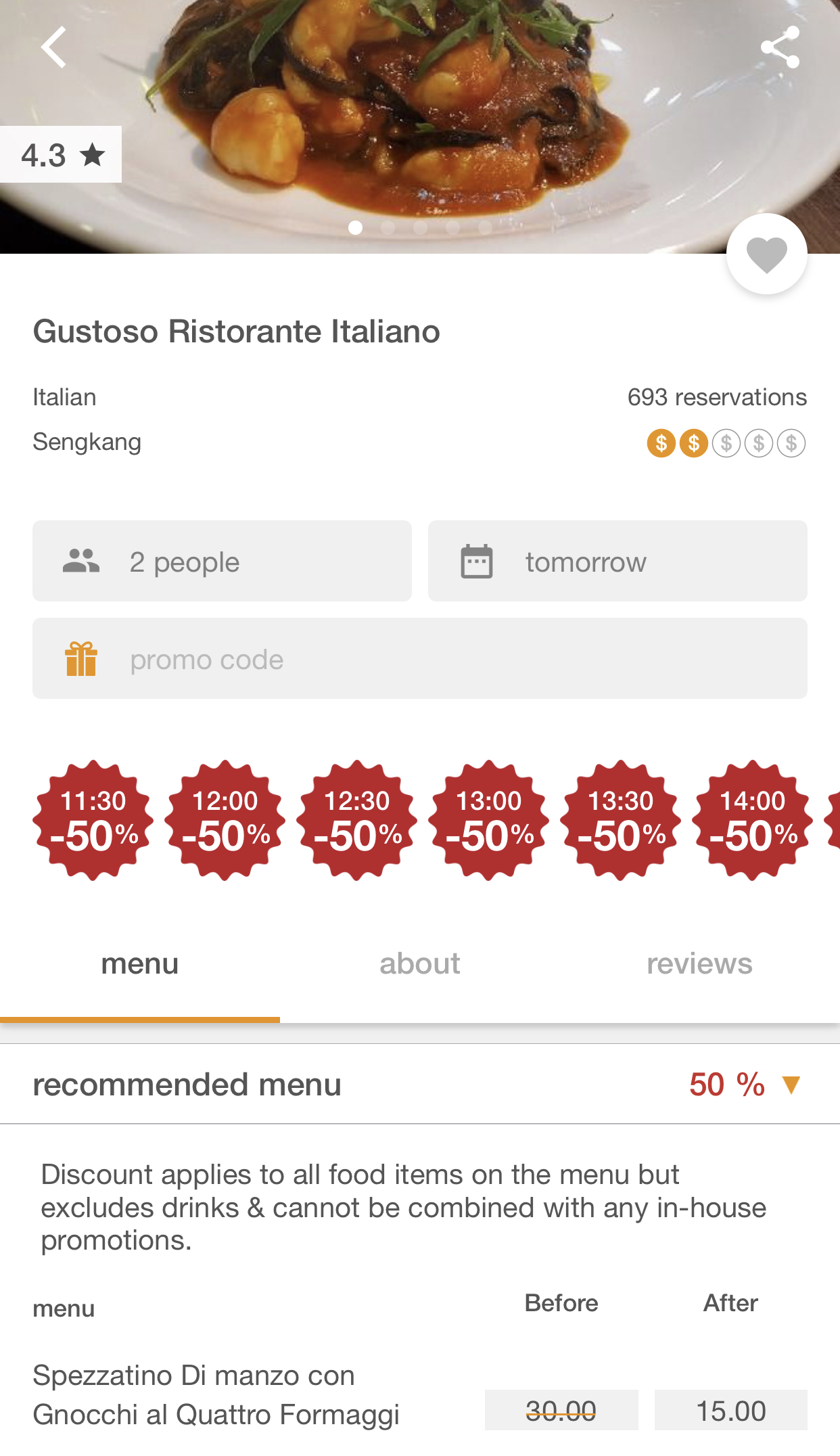 Upon arrival at the restaurant, they just have to show the code to the staff to secure the discount.

You can make a reservation here on Eatigo.

What a restaurant owner thinks of Eatigo

Eatigo connects diners to restaurants, and provides information on the menu, prices, locations and reviews.

For restaurant owners, it helps them attract crowds during off-peak hours using incentives such as time-based discounts.

While their food might be served at a lower price than usual, most owners prefer to have more customers visit their restaurants at off-peak hours, rather than having to face empty chairs and tables, and wait till customers come in during lunch and dinner hours.

This helps them cover the fixed costs that come with running their own restaurants, such as rent and labour costs.

The app, currently present in seven regional areas, such as Malaysia, Indonesia, Hong Kong, and South Korea, has been widely used in Singapore as well.

In Singapore alone, it has been downloaded around a million times so far by the local food-loving community since its inception in 2013.

If you own a restaurant, you can sign up as a merchant here.

This sponsored article by Eatigo makes the writer feel happy there’s another place to go for her food hunts.