A 45-year-old woman who claimed that she attempted suicide multiple times just so her family is able to retrieve her Central Provident Fund (CPF) monies in her account as a lump sum in the event she succeeds, has had her identity publicly outed by the Singapore authorities.

A post addressing the woman's complaints was put up on Dec. 19, 2019 evening on the CPF Board Facebook page.

According to media reports, as well as CPF Board's response, the issue surfaced on Dec. 5, 2019, after Shin Min Daily News reported on the plight of the woman.

CPF noted that Shin Min has reported that several government agencies are actively supporting the woman.

The Online Citizen revealed that the woman, who it referred to as Ms Soo in its reporting, had contacted media outlets in Singapore to share her story.

After CPF Board outed the woman's identity by revealing her name in its Facebook post, a follow-up report was put up by TOC.

This second TOC report on Dec. 19 cited the woman's queries about the rationale for CPF Board to name her publicly.

The woman has also since come out to publicly dispute the authorities' joint statement about what it claimed had happened to her. 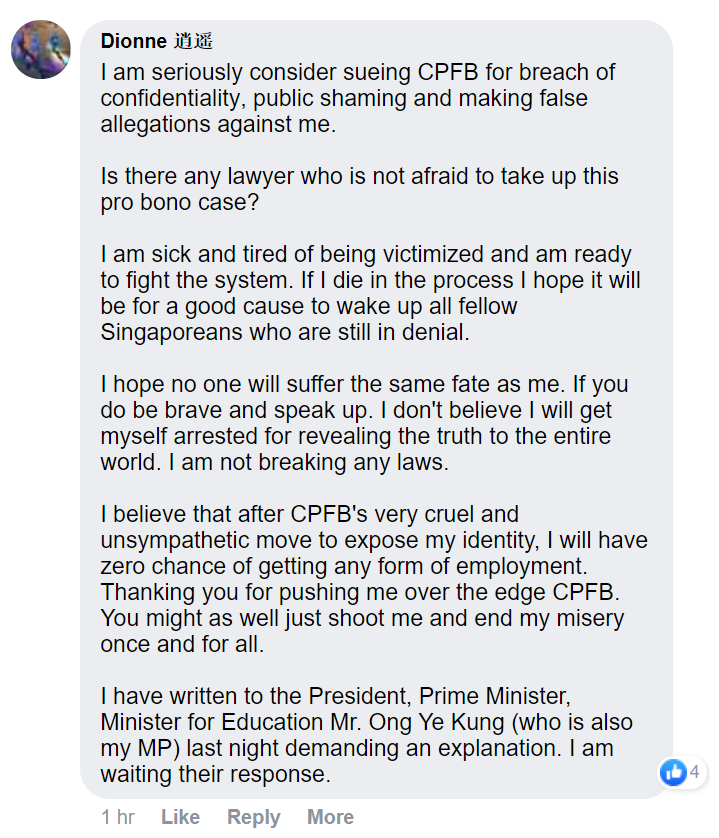 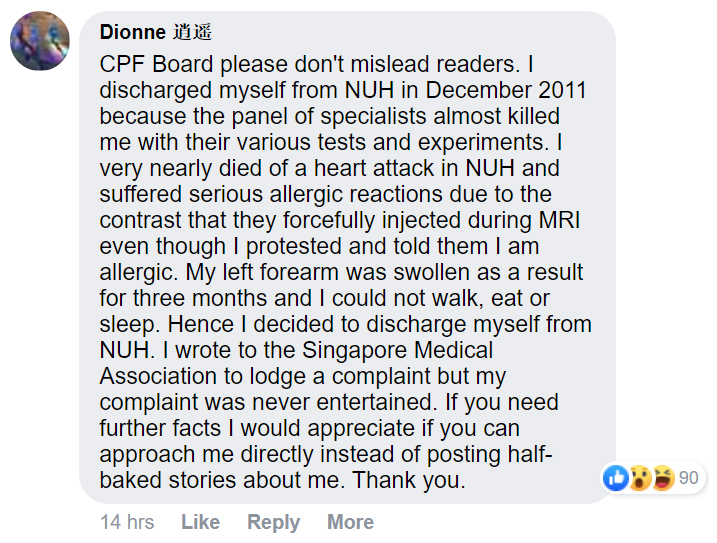 Piecing together information revealed from the disparate accounts, a background about what happened to the woman can be assembled.

The woman had sought treatment as early as 2011 for suspected lupus.

Lupus, otherwise known as Systemic Lupus Erythemathosus (SLE), is an autoimmune disease in which the body’s immune system mistakenly attacks healthy tissue in many parts of the body.

There is no cure for SLE.

Various claims have been made by the woman in the first TOC article.

The woman claimed that she had exhausted all her savings as she was unemployed for three years, and has even written to President Halimah Yacob for help.

The woman requested for the release of her CPF funds from her Medisave and Special Accounts that total S$100,000.

The woman also claimed she is a single parent who has a 22-year-old daughter studying in a local polytechnic, as well as a 75-year-old father and 72-year-old mother.

CPF verified this by noting that Sua's daughter is pursuing a diploma at Singapore Polytechnic and "receives government bursaries which cover her annual course fees fully and some of her living expenses".

Sua claimed her father is unable to work and is relying on a S$472 monthly payout from his CPF Retirement Account, and that her mother only earns S$580 a month as a tea-lady.

She also claimed she has to pay her monthly mortgage of around S$900 for her four-room HDB flat.

On this point, CPF noted that HDB has been advising her on options to manage her housing instalments, such as downsizing to a smaller flat.

The woman told TOC that she doesn't believe she can survive until 55 years old to withdraw her CPF funds.

She then claimed the CPF Board requested for a medical certificate from her doctor to say that she is permanently unfit to work.

A letter by Khoo Teck Puat Hospital reproduced in TOC's first article, said the woman is temporarily unfit to work from November 2019 to May 2020 -- a six-month period.

The woman also told TOC that she is willing to give up her citizenship if that is what it takes to retrieve her CPF account.