299 people were treated for PMD-related incidents in Singapore hospitals in 2018, according to the Ministry of Transport.

As it turns out, PMD riders formed the bulk of those who were injured. Out of these 299 individuals, 259 were riders and eight were pedestrians.

The ministry did not say what capacity the remaining injured individuals had in these incidents.

On their severity, 63 per cent of the injuries were classified as minor, 21 per cent moderate and 16 per cent severe.

These statistics were disclosed by Transport Minister Khaw Boon Wan in a written reply to a question from Nominated Member of Parliament Walter Theseira on Tuesday (Nov. 5).

Theseira had asked for the number of persons who had been treated at accident and emergency departments of public hospitals for injuries resulting from PMD accidents, broken down by riders, pedestrians, and the severity of injuries sustained.

Many more accidents and injuries from other vehicles e.g. bicycles, motorcycles & cars

PMD-related incidents were few compared to other forms of transport like bicycles, motorcycles, and cars, though.

It might be worth noting, however, that the proportion of severe injuries resulting from PMD-related incidents is higher than the average across the other transport vehicles.

Khaw added that the ministry is unable to make international comparisons of PMD-related injuries due to the lack of such published data.

Here's an easier way to look at the data: 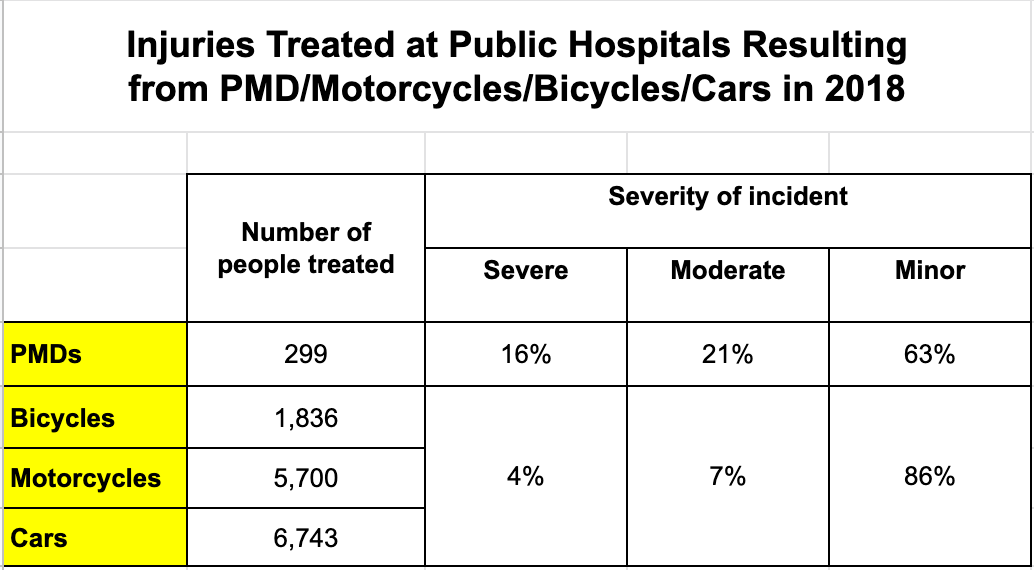