Homebuyers in central China who bought new apartments in a residential development had a shock when they were handed the keys over the weekend.

Having been sold the concept of “high vegetation cover” and “park lifestyle”, as promised by the real estate developer, the public area that awaited their discovery was in reality covered in a blue plastic material to look like a lake with a small wooden bridge.

According to SCMP, the developer, Changsha Shiji Yujing Real Estate, responded that it did not ever promise an artificial lake in the estate.

The brochure only suggested a natural idyll. The promotional material, referring to an ancient fable, reportedly said: “The days pass slowly, as if you’ve fallen into Peach Blossom Land.”

One owner was quoted as saying upon seeing the piece of work: "So I’m supposed to be standing in the middle of blue water, which in fact doesn’t exist. There is no rock or plants." 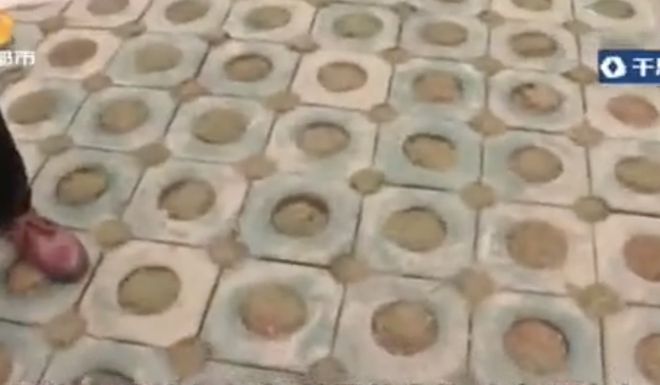 The surface, instead of grass, was covered with yellow mud and turf that no longer looked alive.

A new resident said of the poor impression such aesthetics convey: "They’re usually used for driveways or car parks."

“But this is not the car park area. It’s the open area right outside each building gate, and they call it vegetation.”

The real estate developer staff member rationalised the features by saying that the grass block paving was built satisfactorily -- according to government standards.

“We did so because we need to take into account both fire safety requirements and landscaping needs,” the employee reportedly said.

The company is meeting with representatives of the owners and would work with fire and urban planning departments to solve the issues, the report said.

This phenomenon of largely getting things about right is called "chabuduo" in China.

It has been documented extensively before.