In the post, the restaurant explained that customers are able to catch their own crab when they play the claw machine, located at The Punggol Settlement.

The crab that they catch will be cooked and prepared for them during dinner.

A token, which costs S$5, is required for each play at the machine. 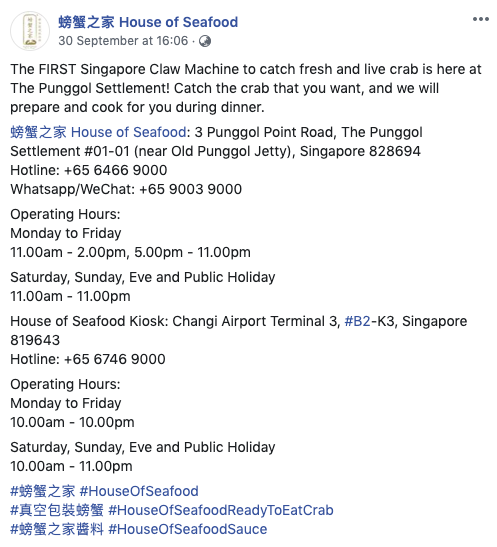 Media company Shout further publicised the machine in a video on Oct. 22.

Here's the video in case you can't see it:

What appears to be a marketing gimmick drew much criticism for animal cruelty.

A minority of commenters, however, found the claw machine "cool", and even tagged their friends to spread the news.

The Singapore Society for the Prevention of Cruelty to Animals (SPCA) responded to the video in a Facebook post on Oct. 23.

SPCA condemned the claw machine, saying that the machine "causes unnecessary harm to the animals".

"Crabs are living creatures, not toys. SPCA advises members of the public to not partake in such activities."

SPCA also stated that they have contacted Animal & Veterinary Service (AVS) to request that the machine be shut down.

Top photos via House of Seafood/FB.