The movement was entirely organised by 15 Singapore youths, a majority of whom were students aged between 19 and 24.

The event saw over 1,700 people, mostly students and young adults, gather in spite of the afternoon heat and smoggy skies at the Speaker's Corner.

Clad in red to symbolise the climate crisis (because the colour red often represents an emergency), the rally-goers mingled and participated in activities.

Some of which include banner drawing, board games and postcards addressed to members of parliament about their concerns.

They also carried hand-drawn cardboard signs with slogans like "the seas are rising, so are we", "we live on a single-use planet" and "protect your mother (earth)".

Emotions were high especially when invited environmental activists made their speeches.

1,700 attendees is an encouraging turnout for an environmental event.

However, online reactions that followed ranged from befuddlement to outright derision.

Comments that flooded the Facebook posts questioned the authenticity of the rally-goers' environmentally conscious actions.

While some might brush off these comments as voices of a vocal minority or climate change deniers, the climate rally, however, appeared to be more divisive than what it set out to be from the online reactions.

So why would a climate rally, one fighting for the planet's and humans' survival, garner such backlash?

Don't get me wrong, there are plenty of Singaporeans who display concern for the environment and the efforts by the young organisers are commendable.

However, understanding how a well-intended climate rally has garnered such scepticism and vitriol, and why the fight against climate crisis might not be a movement that some can get behind, is important for future environmental campaigns.

Here's why the climate rally might be seen as a hippie greenie event.

"Die-in" isn't relatable to most S'poreans

Whether you attended the climate rally or not, you probably have heard about the dramatic "die-in".

If you have not, that was the finale that wrapped up the climate rally on Saturday—attendees were asked to stand up facing the direction of their homes, and then slowly collapse on the grass patch to simulate dying.

Here's a video uploaded by The Straits Times which went viral, racking up over 600 shares as well as 1,100 likes and 764 hahas .

It was supposed to be an expression of solidarity and meant to honour the planet and the flora and fauna on it that lost their lives to climate change.

Many Facebook comments, however, did not view the gesture in the same light:

Out of curiosity, we attended the rally and were among those "dying".

We noticed the gesture did elicit some awkward laughter and snickering even among participants.

As a speaker on stage asked in a soothing voice for all the rally goers laying "dead"  to think of the turtles, rhinos and other endangered animals, the atmosphere was decidedly spiritual.

To be fair, some shared that they felt poignant and reflective afterwards.

Perhaps in Singapore, where practicality and pragmatism are lauded traits, the "die in" might have been perceived as too much of a dramatised performance by idealistic youth, instead of a concrete movement with set goals.

For conservative members of society, the "die in" might have brought to mind tropes of radical environmentalists, the types that chain themselves to trees in order to deter bulldozers.

While the climate rally displayed nowhere near such extremism, the "die in" did give off a similar "hippie" vibe.

Considering how much traction the "die in" gained, Singaporeans might be inclined to think that that was all the climate rally achieved and stood for.

Unfortunately, this finale chosen might have distracted people from the more pragmatic goals that the event set out to achieve.

While one can easily dismiss older folks as not being part of the future, it is quite important that they give their support to the movement to expedite climate actions now.

There is perhaps a fundamental difference in mindsets between the older generations, millennials and Generation Z kids.

The Pioneer and Merdeka generations grew up in a drastically different Singapore when success was defined by the five Cs ⁠— Cash, Car, Credit card, Condominium and Country club membership, which are essentially a self-centred materialistic pursuit.

Even now, it is no surprise that there are young Singaporeans who only want to earn a comfortable life that comprises the traditional five Cs.

On the national level, Singapore has taken a mere 50 years to rise up from a third-world economy to a first-world economy.

Said one Henry Chew to Eco-Business: "Man built skyscrapers, cars and planes. Environmentalists want us to feel guilty about these achievements. But it is due to the immense benefits of fossil fuels that we lead such comfortable lives".

Always pragmatic (or materialistic), some older folks believe that the younger generation should be satisfied with what they have, invariably pointing to the economic gains as evidence of their wisdom.

What they hope we should be more concerned with include finding a stable job, earning enough money to care for our parents (them) after retirement, getting married and boosting our population numbers.

Which some might consider incredibly short-sighted as compared to a climate crisis that is likely to manifest 30 to 50 years down the road. Or sooner than we think.

That perhaps explains how some of them can be still climate change illiterates or worse, deniers.

It's not just the older folks, most Singaporeans are not ready

At the recent Singapore Bicentennial Conference, veteran diplomat Professor Tommy Koh pointed out that while Singapore has become a first-world country, Singaporeans still lack the civic-mindedness that a first-world citizen should have.

While environmentalists urge Singapore to do its part as a first-world country, the question is whether Singaporeans are ready to do so?

It's not just about the intergenerational or knowledge gap but a societal issue that meritocracy creates, driving people to be "working insanely hard to keep pushing ahead" as highlighted by Bloomberg News editor-in-chief John Micklethwait.

Assuming those at the climate rally are the better-off Singaporeans who are well-equipped with knowledge about climate change, can these "woke" Singaporeans be more empathetic and find approaches to reach out to the rest of Singapore?

Harping on Singapore's moral obligation to the world, biodiversity loss and icebergs melting might work for some.

However, activists have to find relatable narratives to effectively garner the support from the ground to convince the masses that they are not "greenies" and the fight against climate change is not an idealistic and irrational one.

But rather, the most pragmatic choice we can take.

Call to actions need to be streamlined and realistic

The climate rally appeared to aim their sights at the government instead of the individuals, calling on the Singapore government for increased and intense action to mitigate climate change.

As the rally goers respond to chants of "What do we want? Climate action! When do we want it? Now!", sceptics might be inclined to dismiss these calls as white noise or frivolous lip service with no concrete plan of action.

The organisers of the climate rally have in fact written an extensive Call To Action (CTA) that did not get anywhere near the coverage that the dramatic "die in" achieved.

Neither did any of those help to raise discussions or awareness on the CTA.

Here's a summary of their demands, which include asking the government to craft a national climate mitigation masterplan by 2020, decarbonising the Singapore economy and bringing down absolute carbon emissions to zero. 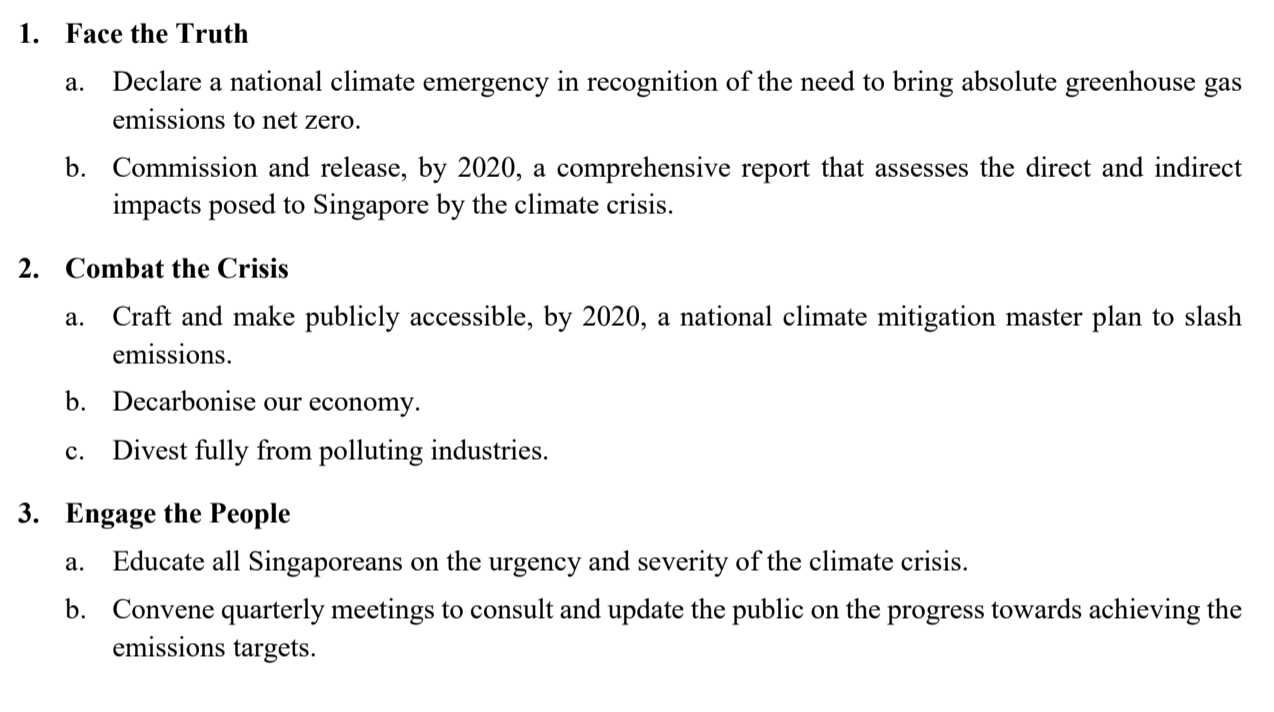 Here's part of their response to Prime Minister Lee Hsien Loong's speech that was delivered at the Climate Action Summit at the United Nations headquarters in New York on Sep. 23:

The Ministry of Environment and Water Resources has implemented carbon taxes on businesses to the tune of S$5 for every tonne of carbon emissions produced.

This is a far cry from the organisers' call for taxes to be priced at S$100 per tonne of carbon generated.

Having said that, how many members of the public can really understand a dry topic like the carbon tax?

Assuming little knowledge of it, typical Singaporeans would probably assume increasing carbon tax by 20 folds would mean having the cost transferred to consumers' level which will definitely not be well-received.

The rally can be more productive in achieving smaller successes by focusing on selective CTA such as carbon tax.

Carbon tax aside, SG Climate Rally has a lot to explain in order to convince Singaporeans that their demands are legitimate and doable.

While the targets set out by SG Climate Rally are ambitious and definitely admirable, it is too much, too soon. Yes, the climate crisis is an urgent and existential one, and the targets are feasible, but the timeframe (2020, for most of their demands) is operationally unrealistic.

Perhaps a more targeted approach is required, both to convince authorities and the public of the thought, legitimacy and effort behind the rally, instead of simply causing a "ruckus", as some might be led to believe.

Questions like that can be dismissed and left unanswered or be taken as an opportunity to engage more people in Singapore's climate conversation.

It's also evident climate issues are starting to capture the public's attention.

The only thing left to do is to turn negative perceptions of it to positive ones so as to make true progress, be it pressuring for greater governmental actions or individuals' lifestyle change.