Siti Aisyah Binte Aidil, 28, has been part of the Emergency Response Team (ERT) for a year now.

The senior staff sergeant has attracted a fair bit of attention online recently as she was featured in a Facebook post shared by Minister of Home Affairs, K Shanmugam.

The post on Sep. 2 described Siti Aisyah as young and fearless, as she has to deal with any terror attacks in Woodlands.

The post has since garnered over 600 shares and 4,000 reactions. 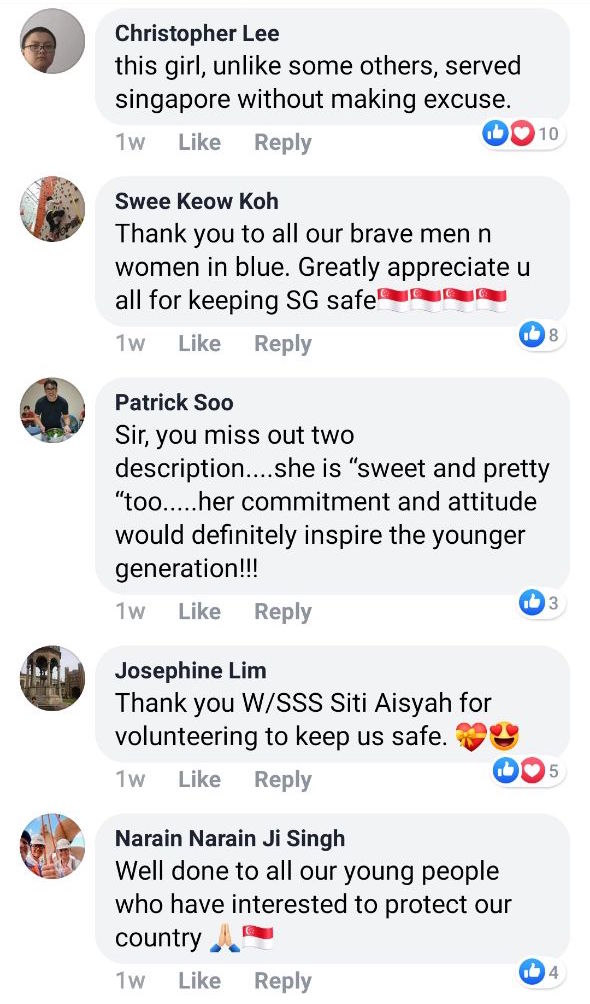 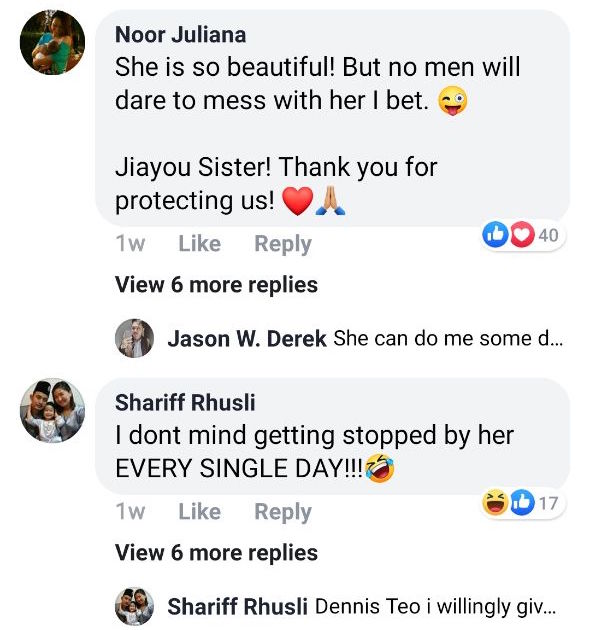 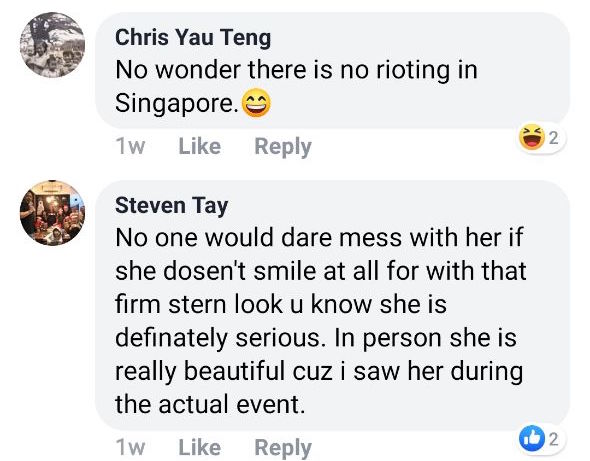 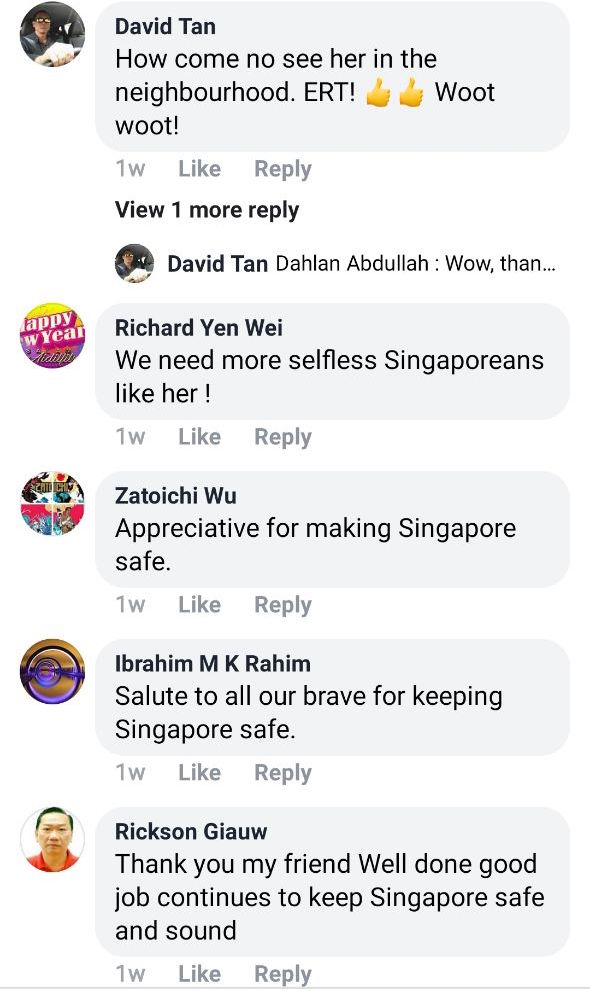 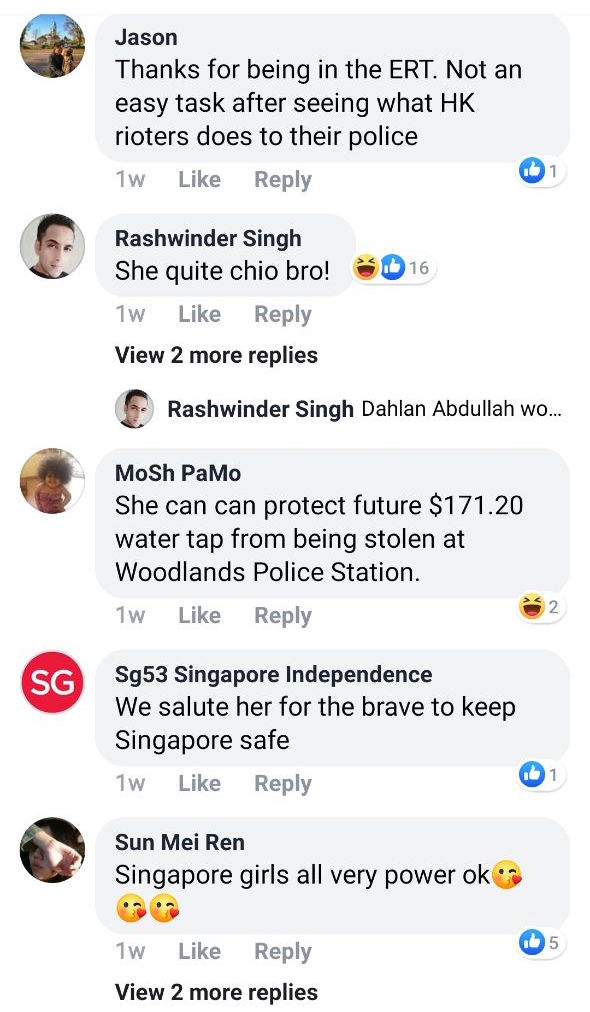 As an ERT officer, she patrols the public areas such as shopping malls and MRT stations.

Siti Aisyah shared with Mothership that she joined the force in 2011 and was previously a Ground Response Force officer at Woodlands West Neighbourhood Police Centre.

She then volunteered to join the ERT, which was set up in 2016 to deal with threat of terrorism.

ERT officers are specially trained in counter-assault skills so that they can neutralise the attackers immediately.

While most of us often see ERT teams in shopping malls or on the trains, that is definitely not the only responsibility they have.

"We conduct patrols at crowded locations such as shopping malls, bus interchanges and train stations. We also engage relevant stakeholders to fight terrorism through the joint development of counter-terrorism contingency plans and security exercises. If necessary, we may be activated to respond to violent crime incidents."

Carries 17kg of gear every day

On a day-to-day basis, Siti Aisyah has to patrol public areas while carrying 17kg of gear, including the submachine gun that she's holding in the photo.

Given her seemingly small built, one might wonder how she copes with that when she's on duty.

Siti Aisyah admitted that it was not easy initially.

"Personally, I found it both physically and mentally challenging to cope with the heavy equipment initially. However, I was put through a rigorous basic course with my fellow ERT officers to build up our endurance; and to develop key tactical skills."

However, after undergoing rigorous training and conditioning, the gear "now feels like a second skin" to her.

"After these training and conditioning, my gear now feels like a second skin. Our training do not end with our basic course either. ERT officers go through continuous and regular physical and tactical training to ensure we stay proficient at what we do."

Great teammates probably made the tough times easier too.

"The physical and mental demands of this vocation keeps me on my toes and drives me to constantly improve and break out of my comfort zone. More importantly, the close bonds I have forged with my team keep me motivated in this job."

While some of us look back and laugh at what we used to dream of becoming, Siti Aisyah is living her childhood dream.

She shared that it was a rather "surreal" experience as her childhood has now evolved into a career, which she is very proud of.

"It is surreal to look back and to realise that what started off as my childhood dream has evolved into a career. I am proud to be a full-time police officer and I am driven to serve the nation."

Being in the force for eight years also made Siti Aisyah appreciate Singapore's safety and security more so than ever.

"The last eight years as a police officer have taught me not to take Singapore’s safety for granted. The privilege of feeling safe to walk on the streets and sleeping peacefully at night does not happen by chance. I am proud to say that I am one of the officers in blue who are committed to keeping Singapore safe and secure."