A student from the National University of Singapore (NUS) who repeatedly molested a woman at Serangoon MRT station in September 2018 was on Wednesday (Sep. 25) sentenced to probation.

According to The New Paper, the judge rejected calls from the prosecution for 23-year-old Terence Siow Kai Yuan to be handed a jail term.

Justifying her decision, District Judge Jasvender Kaur reportedly on multiple occasions described Siow's three instances of touching his victim — twice on her thigh and once at her private parts – as "minor intrusions".

TNP said she also cited a probation report that deemed Siow suitable for probation because his academic results showed he had the "potential to excel in life".

Siow had pleaded guilty to one charge of outraging the modesty of a 28-year-old woman, while two other similar charges were taken into consideration in sentencing him to 21 months of supervised probation.

Molested on the train and in the station

The incident occurred just over a year ago on Sep. 12, when Siow was on a North-East Line train heading towards Punggol station at about 11:30pm.

According to court documents, Siow noticed a woman with "very long legs" wearing a pair of shorts and decided to sit next to her.

At this point, the NUS student "felt the urge" to touch the woman.

He then used his left hand to touch the outside of her right thigh. The woman then shifted away from him and cross her legs.

The woman then moved to another seat before alighting at Serangoon station.

However, Siow also alighted and followed her, his pursuit motivated by yet another urge to touch the woman.

The court heard that as Siow stood behind the woman on an escalator, he then used his finger to touch her buttocks over her shorts.

The woman turned around and shouted at Siow as he walked away quickly.

She told a station officer she had been molested and pointed out Siow, before making a police report one and half hours later.

In court, Deputy Public Prosecutor Benedict Chan objected to probation for Siow, calling instead for a sentence of six weeks' jail, according to TNP.

Chan reportedly cited a probation suitability report that was commissioned after Siow was convicted in a previous hearing, in which Siow admitted to having previously committed similar acts since his enrolment in NUS in 2016.

The prosecutor said it was troubling that Siow could not recall the number of times he had committed such acts, which then developed into a "deep-seated habit".

He was quoted saying:

"The accused knew it was wrong but was emboldened after previous successes. He only sought help after facing the university's Board of Discipline."

However, the judge challenged the prosecution's position, reportedly saying that Siow had "an inability to control his urges".

"Looking at the nature of intrusion, I would say it is minor," she was quoted saying.

Chan pointed out that Siow had committed the offence against the woman three times. This was acknowledged by Kaur, who then reiterated that the acts were "minor".

When Chan pointed out that the first two acts involved skin-to-skin contact, TNP reported that the judge responded by saying "(it was) just a brief touch on the thigh".

Siow's defence lawyer Raphael Louis reportedly noted that his client was due to graduate from NUS in about two years.

"He's getting help, he wants to change, he has learnt his lesson," Louis reportedly said.

Kaur agreed with him, saying:

"I think there can be no doubt that there is extremely strong propensity for reform."

She then reportedly cited Siow's academic results and the probation report's recommendation for probation.

"He was 22 years old when he committed the offences... and the nature of the acts (is) relatively minor," she said, according to TNP.

Along with his sentence of 21 months supervised probation, Siow will also have to perform 150 hours of community service.

Addressing Siow, Kaur expressed her "confidence" that he would not re-offend.

"I hope you don't disappoint me," she said.

Speaking to Mothership, the victim, whose identity cannot be revealed due to a court-imposed gag order, said she was disappointed to learn of Siow's sentence.

She described Siow's actions as "premeditated and calculated", recounting how he had alighted with her at Serangoon — two stations down from his original destination of Hougang.

She added that she did not feel a sense of closure about the incident.

The woman also took to Facebook to express her thoughts on the case. We are appending a screenshot of her post with her identity redacted here: 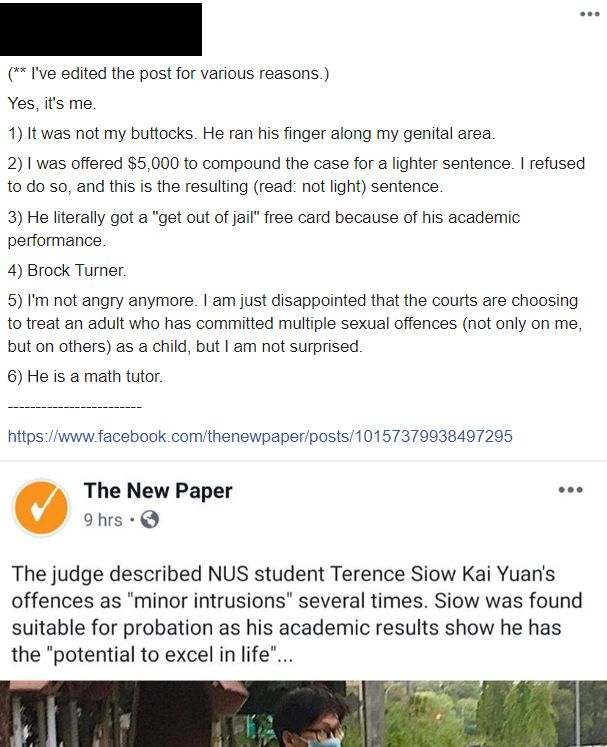 In her post, the victim said she had been offered S$5,000 to "compound the case for a lighter sentence".

She also referenced Brock Turner, a sex offender in the U.S. whose sentence of six months' jail for raping a woman stirred controversy after many deemed it too lenient.

Turner himself was a student-athlete on a swimming scholarship at the highly-regarded Stanford University. The profile, which has since been taken offline, also lists Siow's cumulative average point (CAP) — the weighted average grade point of all modules taken by a student — as 4.39 out of 5.

According to NUS's website, this would typically signify a B+ to A- average.

Speaking to TNP, an NUS spokesperson said Siow had faced disciplinary sanctions at a Board of Discipline hearing last October.

This included his suspension of candidature and mandatory counselling.

The spokesperson stressed that the university took a serious view of student misconduct and that disciplinary sanctions will form part of the student's formal educational record at the university.

TNP also reported that Siow is currently getting help from NUS to control his sexual urges, and is expected to be back in school, but did not detail when specifically.

For each count of outrage of modesty, Siow could have been jailed for up to two years, fined, caned or any combination of the three.