Some Singaporeans would undoubtedly have tried "shark head", an exotic-sounding dish served in some restaurants here.

The seafood dish is often served steamed with gravy, and is popular as it is believed to be rich in collagen.

However, consumers might want to rethink eating "shark head".

This is so as the animal has just been classified as "critically endangered".

Trade for this species now controlled

Despite being called "shark head", this species is actually the shovelnose ray (Rhynochobatus australiae).

Named after their distinctive broad and pointed snout, the ray is native to various parts of Southeast Asia, Australia, and can be found in Singapore waters.

Their fins are reportedly prized for use in the popular yet controversial shark fin soup, and are the most expensive in international markets, according to The Straits Times.

It was classified as critically endangered by the International Union for Conservation of Nature (IUCN).

Shovelnose rays, along with 17 other species of sharks and rays, were added to Appendix II of the Convention on International Trade in Endangered Species of Wild Fauna and Flora (Cites).

For species under Appendix II, trade of the animals must be controlled.

To export these species, a permit must be issued.

Exports permits are issued if the species is obtained legally, and if the export is not detrimental to the survival of the species, the Cites website stated.

According to ST, this ruling will take effect 90 days from when the species was listed on the Cites Appendix.

Overhunted for fins and sold locally too

They are considered the most threatened family of marine fishes, according to conservation biologist Peter Kyne, on The Conversation.

Their falling populations are driven by overhunting for their meat and shark-like fins.

The fins are reportedly traded for S$1,385 per kg.

The rays are sold in Singapore as well.

When ST visited the Jurong Fishery Port, all of the shovelnose ray carcasses had already been stripped of their fins.

Additionally, all the stalls there had reportedly sold all their rays within two hours of opening.

Marine conservation organisation Marine Stewards added on its Facebook page that when the rays were obtained from the port, all their fins had been removed.

Shovelnose rays are even sold at supermarket chains in Singapore.

According to Today, Giant commented that it does not carry the shovelnose ray.

Sheng Siong and FairPrice though, did not respond to queries.

A visit to a FairPrice outlet by Mothership, however, showed that despite the new classification, shovelnose ray meat is still being sold.

And at rather affordable prices.

Cites is enforced by the National Parks Board (NParks).

For those bringing in exports of shovelnose ray to Singapore from other countries, NParks will verify their export permits, in accordance with Cites Appendix II.

If the shovelnose ray is brought in for food, importers must apply for permits from the Singapore Food Agency (SFA), and the agency will check if the applications are accompanied by NParks' Cites permits.

Heavy penalties exist for those who illegally import or export species listed under Cites.

Under the Endangered Species Act, those who import or export such species without a permit can be fined up to S$50,000, jailed for up to two years, or both.

However, Cites only regulates international trade.

This means that such protection isn't extended to shovelnose rays that are caught in Singapore waters, and sold locally, reported Today.

However, recreational anglers have been known to catch shovelnose rays outside of these protected waters. 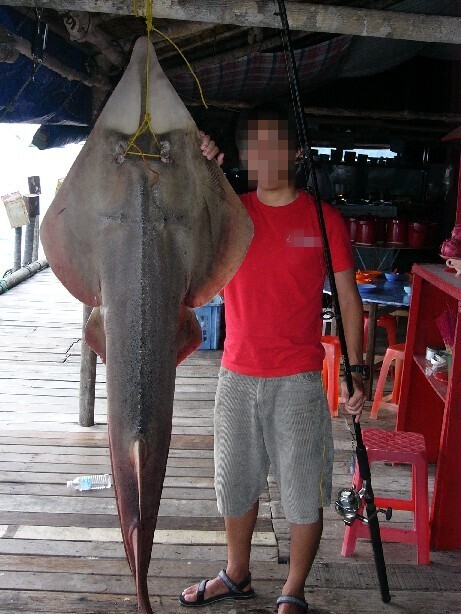 Greater awareness of this critically endangered species is necessary to prevent their further decline in Singapore waters.

Those caught fishing in "no fishing" areas, such as NParks' parks, can be fined up to S$5,000.

Those caught fishing in nature reserves can be fined S$50,000.