Patricia Mok might be well known for her loud and larger-than-life comedy as well as the "ah lian" persona, but she clearly cleans up well too.

The photo features Mok dressed up in an elaborate costume resembling wanton mee.

According to her Instagram post, Mok had been attending a friend's themed birthday party where guests were instructed to come dressed as their favourite food.

Mok evidently took the rules seriously and came as the noodle dish personified, even calling herself "Miss Wan Tan Mee".

Dressed in a tasselled yellow dress bearing much semblance to noodles, Mok had fake char siew and wanton plastered to the front of her dress. The collar was made of leafy kai lan.

Mok completed her look with giant chopsticks in her hair

Costume made by designer

The ensemble was made by designer and founder of costume shop The Costume, Theresa Chan.

Chan even posted some photos of the design process. The "noodles" appear to be made of yellow yarn, and the "char siew" made from foam.

Local actress Ann Kok was invited to the party as well, among other stylists and guests.

Kok herself donned a costume that transforms into a "hot and spicy" cup of instant noodles when she squats down, while some other guests dressed up in onesies.

The internet was clearly taken by Mok's costume, with many complimenting it for its creativity. 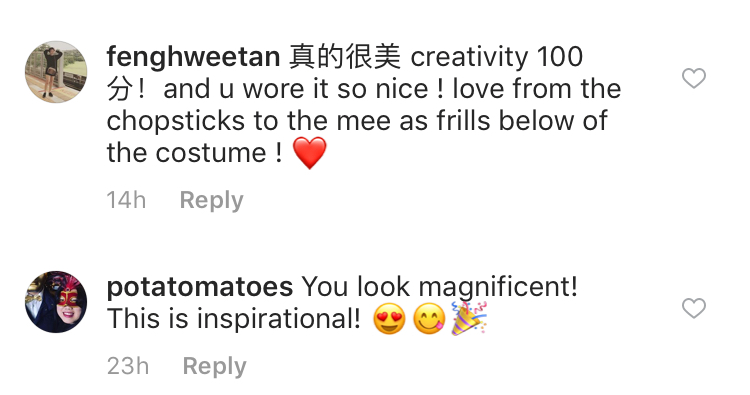 Some even suggested that it could be a potential Halloween or Miss Singapore Universe costumes. And one can easily imagine Mok stealing the show during the party.