The Media Literacy Council (MLC) is an agency that works with "industry, community, and government" to promote an astute and responsible digital citizenship.

But it seems, if a recent Facebook post from them is anything to go by, that they may not necessarily have been living up to this objective.

Clickbait and satire as "fake news"

The post, published on Thursday, Sep.5, pointed out the following as "fake news": The categorisation of satire, in particular, as "fake news" has sparked a flurry of responses from commenters, most of whom disagreed with the labelling.

Some of them also pointed out that the Protection from Online Falsehoods and Manipulation (POFMA) Bill only covers false statement of facts, and does not cover criticisms, opinions, satire and parody. 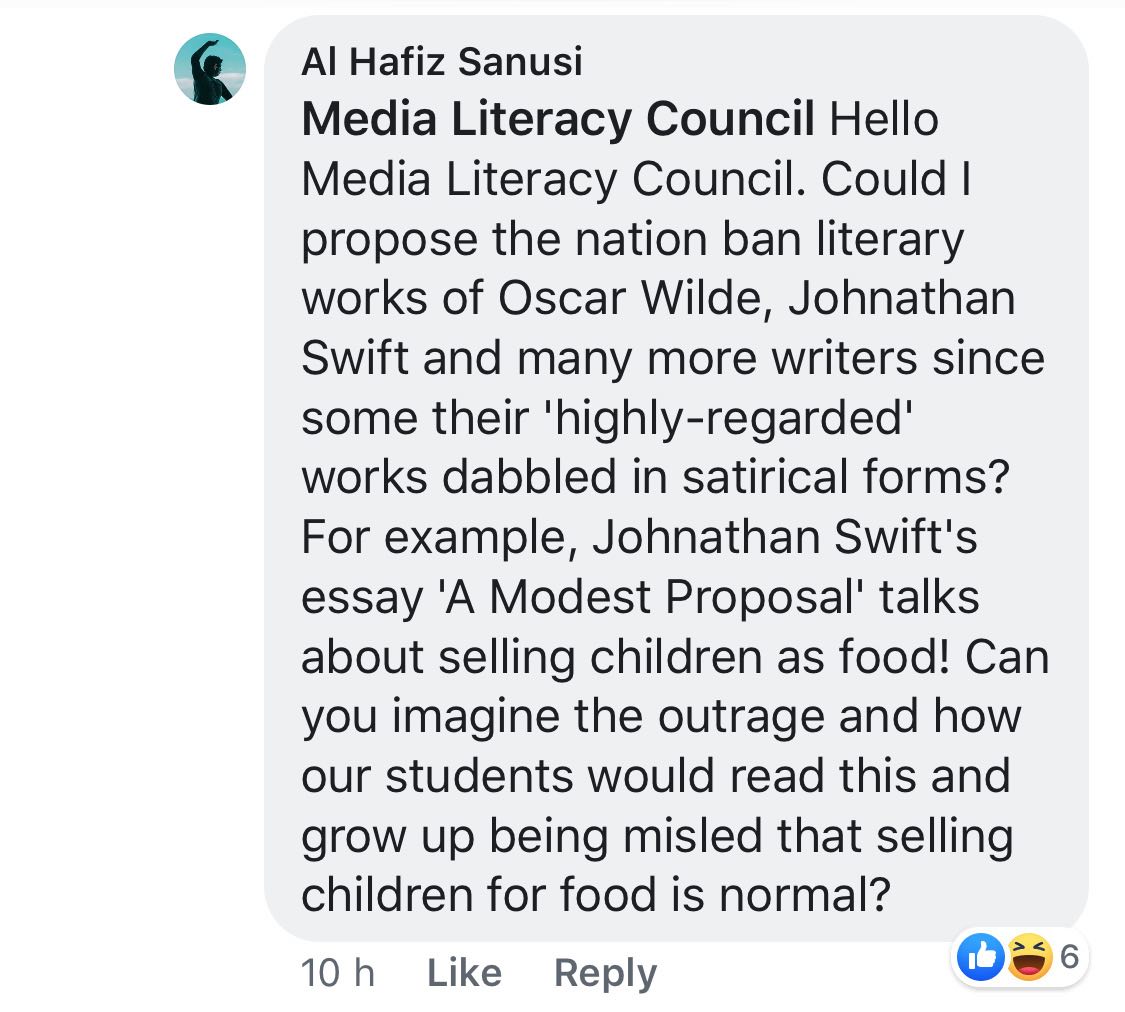 Local author Sebastian Sim also waded into the discussion, pointing out that it is "chilling" should the categorisation of "satire" under "fake news" be truly intended by MLC, and not just an honest mistake. We also wanted to point out, by the way, that in an interview he did with Michelle Chong's Ah Lian personality, Minister for Home Affairs and Law K Shanmugam also specifically said that satire does not constitute fake news. According to this Straits Times report on it:

"He also pointed out that "liking", commenting on and forwarding news that could be fake are all not covered by the law. Satire and parody, such as Ah Lian's videos, are not covered as well."

MLC responds: Satire, clickbait 'other possible scenarios' in which fake news can be spread

MLC has since responded to such concerns in a reply left to one of the comments on the original post.

While reiterating that the POFMA bill "does not extend to opinions, criticisms, satire or parody", the examples which MLC listed "represent other possible scenarios in which Fake News can be spread, such as through clickbait articles that make exaggerated claims, or instances of people being fooled by a satirical article in which the irony or humour is not readily apparent". 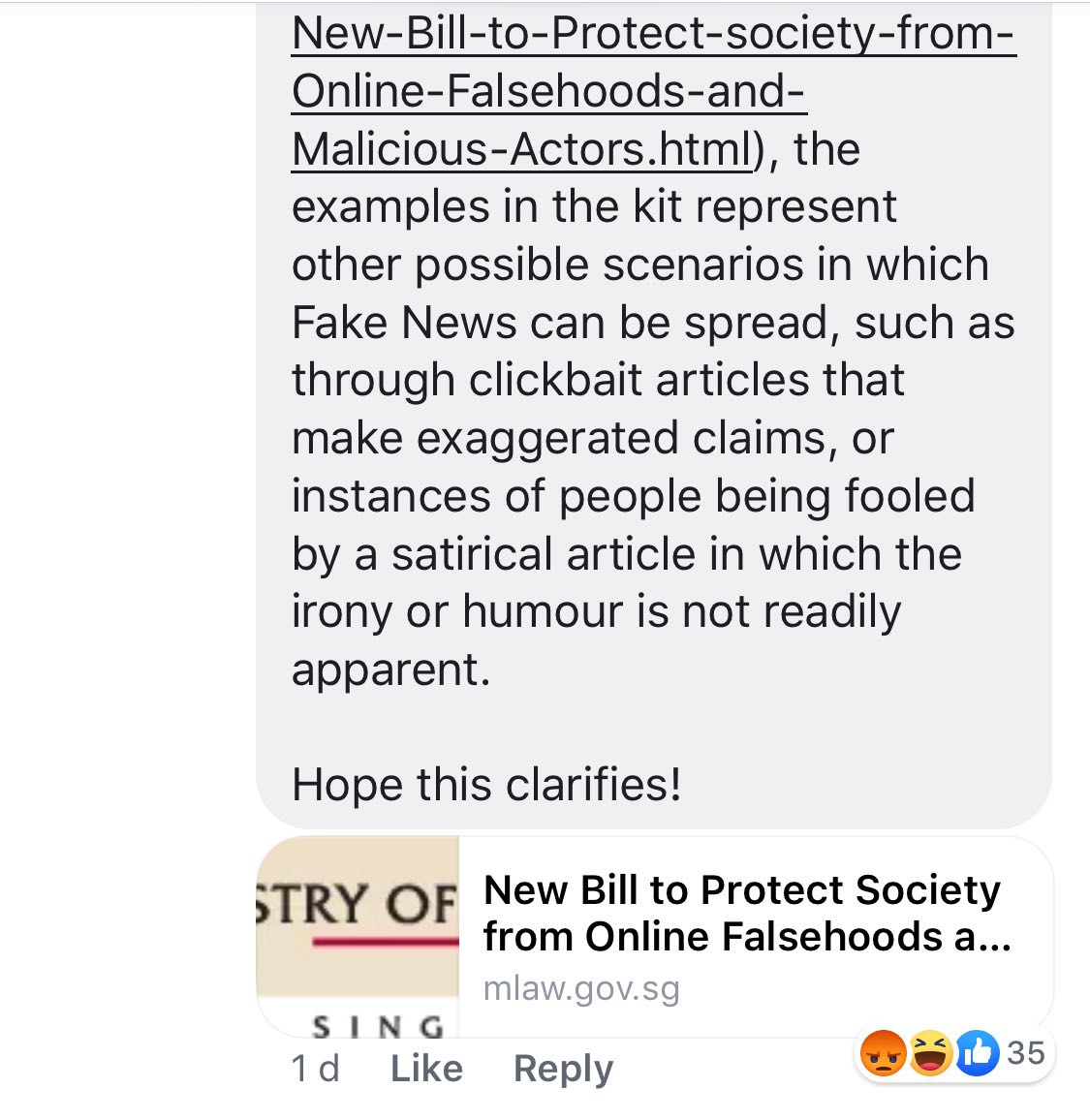 Unfortunately, this clarification was not accepted

As you might expect, MLC's explanation was unsuccessful in stemming the overwhelming tide of disagreement with its graphic, instead yielding even more questions regarding its initial categorisation. 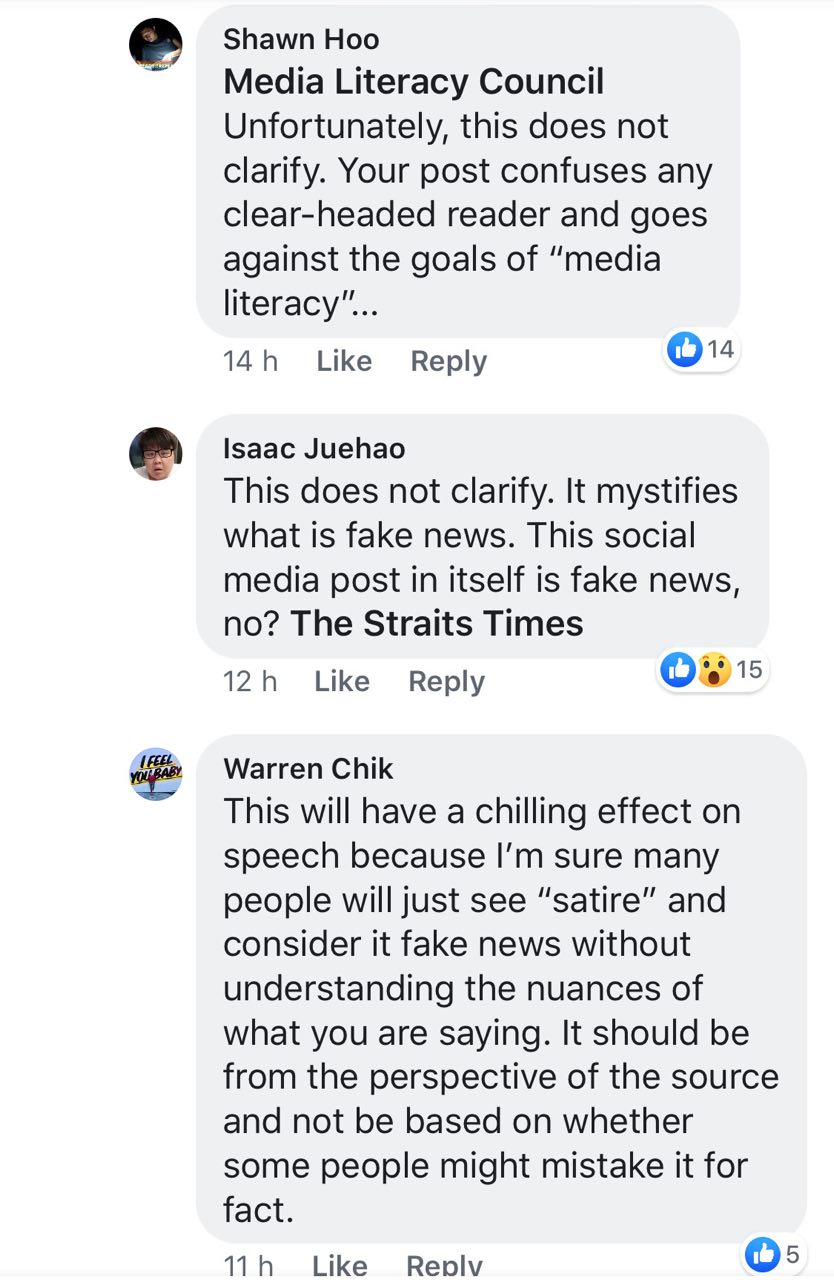 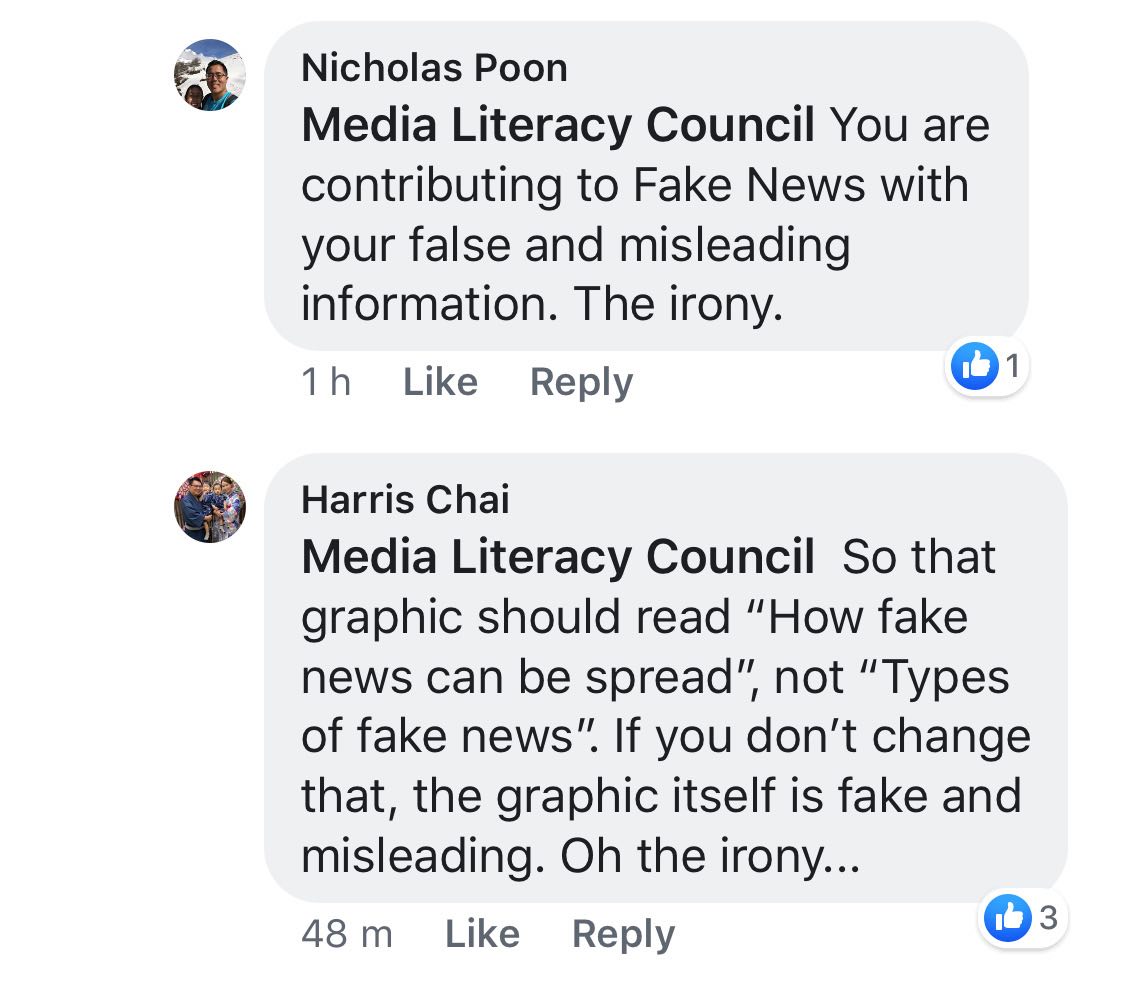 Some also pointed out that instead of doubling down on what many see as an obvious mistake, MLC should rework its advisory and backtrack on what they themselves deem as "fake news". 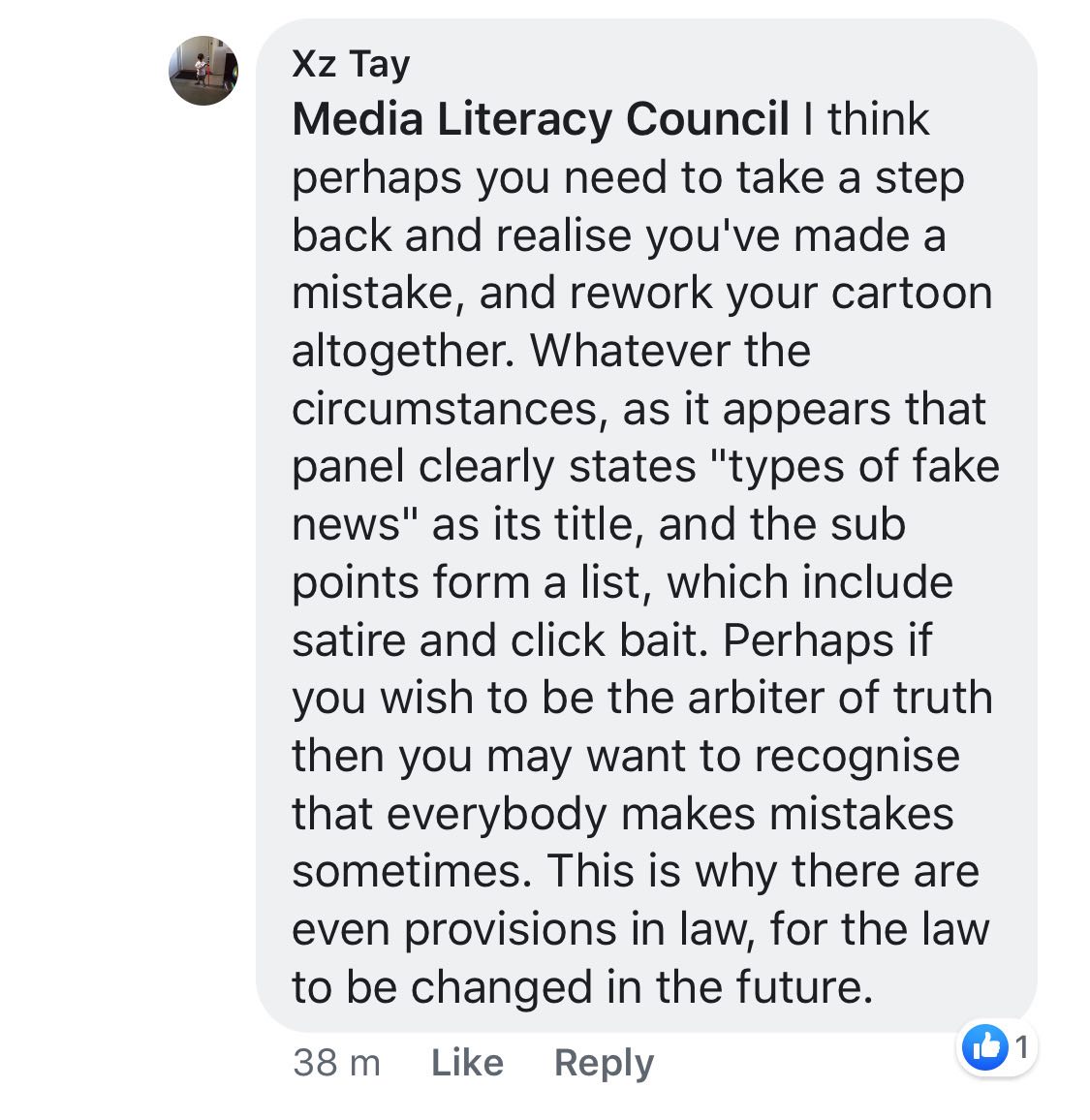