So I've been with my girlfriend for over two years now.

Yes, she is Thai.

No, I did not meet her in a Thai Disco. I met her in Bangkok.

Yes, it is a long-distance relationship. I see her once a month at most only.

With all those "credentials", you can bet that there have been a lot of lessons to be learnt, ranging from human behaviour, how people view you and what to expect from relationships, in general.

Let's just get to it.

1) People will judge, lambaste, tease and even look down on you, but that's their problem, not yours

Let's just get it out the way. There is indeed a strong stereotype about Thai girls here, mainly because of the Thai Discos in Singapore and Thailand itself.

"Haha are you sure she's a girl? Not a tranny?" said most people half-jokingly.

"She probably just wants your money bro," said any other guy here.

"I give you three months, max" said a friend's girlfriend to my face two years ago, which was really ironic cause she looked like a tranny herself.

I heard them all. It just happens. It's just part of life. Some people are ignorant. Some people plain, don't give a shit.

It was kind of annoying at first, but I didn't let any of that get to me.

And it honestly wasn't very difficult. The way I see it, when people get out of their way just to criticise others' relationships, it's because their own relationship sucks and are unhappy themselves. For example, the people who criticised me were the same ones I know for a fact then were cheating on their own partners.

Did I have to take any of their crap seriously? Of course not. As I said, it's their problem, not yours. If you're happy with somebody, that's all that matters.

To add on to the last point, people will always view the foreigner in a relationship according to their own understanding and well, stereotype.

I've no idea how many people have curtly asked, "How is your Thai girl?" as if she's some commodity.

I always simply reply, "She's not my Thai girl. She's my girlfriend." And even that reply alone is shocking to some, evoking a, "Haha please lah, dude."

However, I find that it's something common around here, that's why girls dating white dudes are called Sarong Party Girls. I personally know of Chinese girls here who are dating Indian guys and their family cannot accept it.

It is indeed condescending, but you can't let the ignorant faze you. Doing so would only be a waste of time and energy.

I'm not about to challenge the status quo on how we view certain foreigners. It's just how it is. It's sad. It's even sadder to see how people react when their own beliefs are challenged.

But whatever. If you're spending too much time poking your nose in others' relationships, especially when you're sad, lonely and worrying over nonsense like if she thinks you're stalker just because you "Liked" her photo, it's time to look in the mirror.

This is simply my observation.

My only assumption is that girls here are against the idea that foreign girls are objectifying themselves in the local nightlife scene here and that they think Singaporean guys are getting way too hooked on going to such places.

My assumption for the guys is that they enjoy said nightlife scene and... yeah, they enjoy it. Go figure.

Thanks for the support guys. No seriously. When I was down and needed someone to talk to about my relationship, the only options were my guy friends.

4) Ignorance is part of trust. Period.

Okay so many people like to ask, "How do you trust her? How do you know she's not screwing around behind your back?"

Those are the wrong questions.

It's not about "how." It's that I do. I trust her. I accept that ignorance is part of trust and that's that.

Ignorance is always part of trust because you can't be with him or her 24/7.

Even if my girlfriend was working here, she can easily cheat on me by having a lunchtime quickie in the toilet if she wanted to.

So I don't think the issue of trust has to do with distance or race. Everyone has to deal with it in their own relationship anywhere.

In this blog post I detailed the first time I met her parents, in the countryside of Thailand. It was pretty mind-opening to see the way people lived there.

That's one perk about having a partner who's not from around here. You'll learn of their culture, way of life, language and many other cool stuff that go beyond a tourist's point-of-view.

That's kind of effectively taking travelling to whole new level. It's a breath of fresh air especially if you feel stifled and stuck in routine here.

If you get to know somebody who's not local, don't just take them as some trophy or achievement. Get to know them and where they're from. You'll be surprised with what you can learn.

6) A long-distance relationship can work out if you want it to. Don't say it can't.

It was scary as hell at first. The distance and time apart made it somewhat torturous.

But it panned out.

Most people think a long-distance relationship is too hard that it can never work out, that they have to call it quits the moment somebody has to leave.

It is hard. No doubt about that. But it's honestly how much you want it. If both parties are willing to do what it takes, you two will grow stronger.

Just do what it takes. Plan your budget for visits. Plan your leave. Communicate everyday (No excuses here. Apps and the Internet have made it easy and free). Don't screw around and think you can get away with it. Sign up for airlines' newsletter to make sure you receive promotions. Don't be so damn afraid of everything in life.

I feel very grateful that she's only two hours and a couple of hundred bucks away. It could be harder if she was from Europe or something. But whatever the case, when there's a will, there's a way.

Can means can. And it will get better. 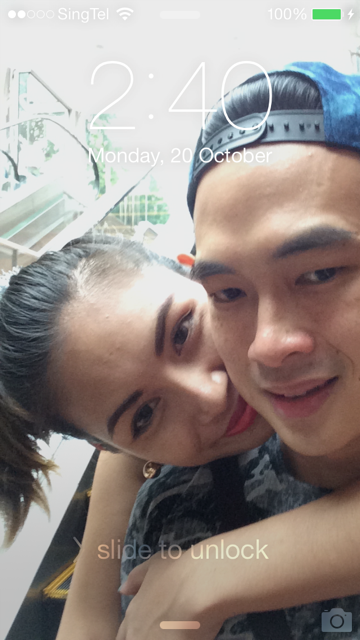