Office politics. The bane of any workplace.

It sucks. It's toxic. It makes your job that much more difficult and nobody likes it.

And we're not talking like it's the same as the TV series, The Office, where it's funny and it all pans out.

We're talking a purely destructive environment that isn't good for both employee and boss alike.

Perhaps you're caught in the drama without your knowing or you subconsciously are taking part in them. You never know. That's how bad it can be.

1) There're passive aggressive Facebook statuses being posted all the time

And you can't help but wonder who the hell they're referring to.

2) A person's affinity is decided by the smallest thing

3) Somebody will not be liked over the smallest thing

Maybe your tired face happens to be your bitch face.

Someone will find a problem with that.

4) Lunchtime conversation is all gossip

It will be endless. There'll be nothing of substance.

I once attended a week-long course. Nobody knew each other at the start, but we all made our own friends pretty easily.

Somehow, from the second day onward, some girl in our group was complaining about the other groups non-stop. It happened everyday.

5) A group will unite over their disdain of somebody

And it doesn't matter if that somebody has actually been misunderstood or that in actual fact, only one person doesn't like that person for some petty reason.

Heck, it doesn't matter if that somebody is actually the only sane person in the office.

6) Several cliques exist through the workplace

Don't expect them to overlap.

So when somebody is complaining or gossiping about something to you, you always only:

"My opinion? Nah. I've no opinion. I hardly know that guy. Okay I gotta get back to work. Byeeeeeeeeeeeeee."

8) Gossip extends to other companies in the industry

This was something I observed when I was writing for a small publishing firm here.

Whenever there was a press conference out there, a lot of writers throughout will congregate there to cover the event.

The gossip-monger will then find a problem with somebody from another company.

Whoever is in the media, fashion, marketing or nightlife industry, I bet you can relate.

9) There is a culture hypocrisy in the office, which in turn is fuel for more gossip

Person does not like boss and constantly bitches about him. However, Person does not want to get in trouble and hence does his work and acts respectfully to the boss.

Others will take Person as a hypocrite and thus create more gossip.

Office politics can be so strong that it can find a way to bite you in the ass. Perhaps you're young or still new to how everything plays out in the office, but it is how it is.

It doesn't matter if you try to be fair, be a good person or that you thought you were cracking a harmless joke during lunch. That may turn into, "I heard you were talking shit behind my back."

If somebody has a problem with you, they will find a fault in you.

I say, throw aside your convictions and take it as a lesson learnt, that nothing is truly ever safe in a toxic office. The walls have ears. Rise above the bullshit and don't partake.

11) There're strong, but unproven reasons to believe that somebody is romantically involved with somebody

This co-worker and that co-worker. The boss and that hot O.L.

It doesn't matter. Somebody is hooking up!

12) Promotion has nothing to do with work competence

Some might say it's only naive to believe otherwise though. 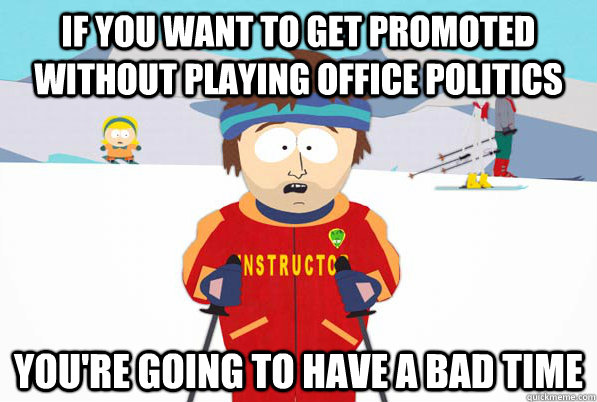 Alden Tan is a writer who graduated from NUS and is now doing the whole “quit my job to follow a dream” thing as he blogs about honest and real stories. Check out his free book, 12 Things Happy People Don’t Give a F**k About.