If any of you have read up on our first Prime Minister Lee Kuan Yew, you would know that the man has had some famous lines. Some were inspiring, others were controversial and strangely prophetic.

But none was more memorable than his words in 1988. Before most of us were born. You can hear him say this here at 6:06.

“And even from my sickbed, even if you are going to lower me into the grave and I feel that something is going wrong, I will get up.”

As a Singaporean, this beats Martin Luther King's "I Have A Dream", and even King George VI's first wartime broadcast (as featured in the 2010 movie, The King's Speech) hands down.

Say what you will about LKY, but that's true dedication right there.

Here are how we imagined other authors tackling a line as epic as this.

Ser Harry felt them lower him into the cold ground. His mind wandered to the strange conversation with the man he had met at Braavos.

“Valar morghulis,” the priest said to him.

All men must die.

All men must serve.

Frodo looked up, eyes squinting as he struggled to make out the figure in the light. As quickly as it appeared, the white flash faded, falling the beast in an instant.

“I come to back to you now, at the turn of the tide,” said Harry the White.

Dumbledore smiled."We're at Lim Chu Kang, you say? I think if you decided not to go back, you would be able to... let's say... board the train?"

Harry paused. "The train? Where would it take me?"

"No," Harry decided. “ These are dark times we live in, and I must choose between what is easy and what is right."

“Then you have go, Harry,” the old wizard laughed kindly.

Steady now. Keep calm. What is a coffin but a wooden box?

“I would very much like to rise from my sickbed, Doctor, if you would allow me to,” Harry smiled as he sat up on his bed, wisps of white hair lifting in the afternoon breeze. The doctor looked at the former Prime Minister and gave a silent nod. “I have unfinished business and it bothers me to no end,” he continued.

“You cannot keep me in this grave,” he smiled.

October 13, 2059. Woke up in grave this morning. Something felt wrong. Heard loud mutters of recession and a winning Opposition Party. Unacceptable. Must get up.

“Why don't you want to retire?"

“Because this is what leadership is about: responsibility. If I ever felt that something was amiss and if I could get up from my deathbed - and I can - there is no doubt I would return to finish the job. Leadership is more about a fancy title. Whether or not you are a store manager, colonel or minister mentor - it is always about giving your all, even if means coming back from the grave.”

“Trouble Singapore is in. Lower me into the grave, you will not.”

“I might be on MC, but I will return if I find things to be unsatisfactory.”

Harry sat up in his box,

He wiggled his toe and felt his socks,

There was something different in the air that day,

Harry knew he had things to say.

“I have to succeed where they went wrong!”

Planet of the Apes

“Me feel something wrong. No rest for me.”

“Me make everything right.”

“When death cometh to claim thy soul

I shall not budge an inch’

Till I right the wrongs of old,

Thou shalt feel my mighty pinch.”

The person spoke to The Associated Press on condition of anonymity that Singapore’s first Prime Minister Lee Kuan Yew has allegedly risen from his grave.

Mr Lee was quoted in local newspaper The Straits Times as saying, “something is wrong.” 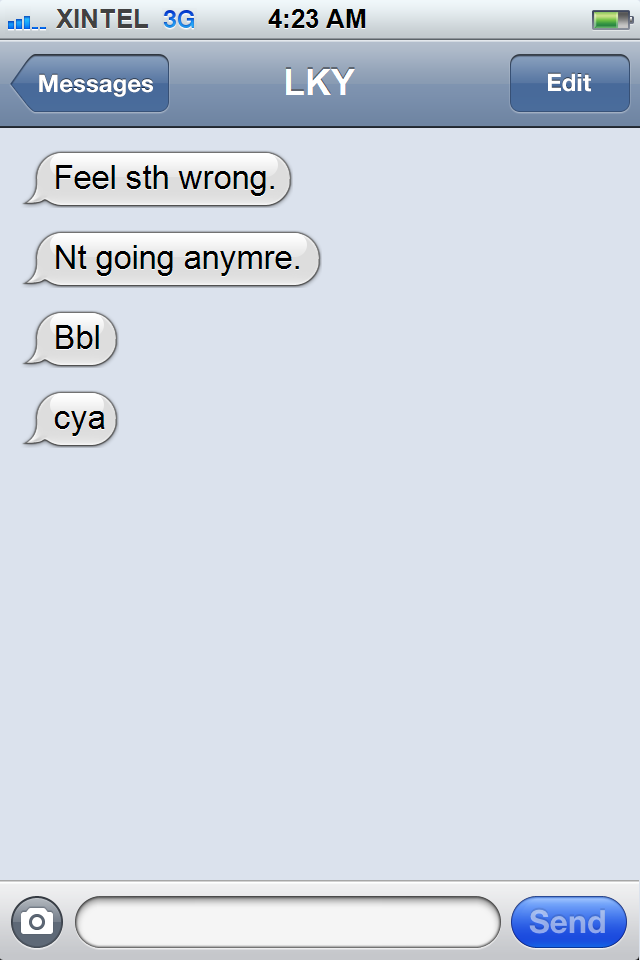 And, of course, we've saved the best for last.

Man gets lowered into grave...What happens next will blow your mind!

15 pictures of real-life immortals…#14 is AMAZING!

10 quotable quotes that only Lee Kuan Yew is capable of