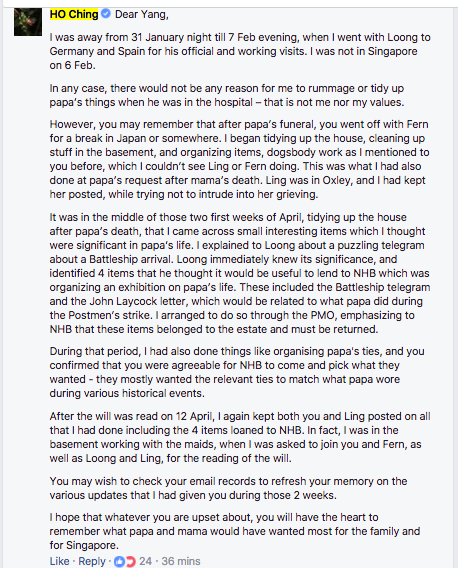 This is quite a development because it was previously revealed elder brother Lee Hsien Loong isn't on speaking terms with Lee Hsien Yang. The siblings communicate via their lawyers.

So, for sister-in-law Ho to address Lee Hsien Yang on a public platform for all and sundry to see, that's a step forward.

But one other thing that has caught Singaporeans' collective eye is the word "dogsbody" Ho used in her response.

I began tidying up the house, cleaning up stuff in the basement, and organizing items, dogsbody work as I mentioned to you before, which I couldn’t see Ling or Fern doing. This was what I had also done at papa’s request after mama’s death.

The Google definition of "dogsbody" is "a person who is given menial tasks to do, especially a junior in an office".

It is a noun and refers to someone responsible for drudge work.

For example: "I got myself a job as typist and general dogsbody on a small magazine"

The origin of the word is British and it is an informal term.

An equivalent word in American slang would be "lackey".

The Lee family is wont to using British slangs and words with British origins.

The first recorded instance of the elder Lee using "ducks and drakes" was way back in 1966 in a speech made at the Kampung Glam PAP branch.

Some of these terms the late Lee said that made you google them have been compiled here.

Now Singaporeans know what "dogsbody" means, let's go back to being dogsbodies and leave highfalutin disputes to people who play ducks and drakes with one another.