Friends who know me well will know that I hold only fond memories of my travels to Japan.

From the country’s food and fashion to its people, culture and incredible scenery, there’s hardly a thing I can think of that I don’t like about Japan.

But while there are many magical things about Japan (at least to a tourist like me), there is one thing that stands out the most in my books - the super oishii (yummy) food.

So, when MoguShop approached me one afternoon about the chance to learn how to cook Japanese food at a private home-dining class, I most definitely agreed.

About the Chef, Naoko Kashiwagi

Naoko Kashiwagi is a Japanese home-based chef with over 10 years of experience in Japanese home-style cooking classes and private catering.

Formerly based in Tokyo and the United Kingdom, Kashiwagi left the comfort of her home city to come to Singapore in 2020 when her husband received an opportunity to work here.

She saw this as an opportunity to meld her passion for food and art as her philosophy is simple: home-cooking should be simple but colourful, even if we make a single dish for a day.

Kashiwagi received her first few students after sharing photos of her cooking creations on her Facebook page Naoko’s Kitchen LLP and on her Instagram account @naokoskitchensg.

From thereon, word spread, and the rest is history.

The Class: Recipe and Origins of the Ingredients

Prior to my home-dining class with Kashiwagi, I had seen some photos of her food creations on her Instagram page.

From homely, izakaya-type dishes to more complex, kaiseki-style dishes, Kashiwagi’s cooking repertoire seemed to encompass the type of food easily found in a regular Japanese eatery (in Singapore) to Japanese food I had never even seen, let alone tasted before.

Her recipes are based on traditional Japanese cuisine and use various natural Umami flavours which enrich the taste of her dishes.

As I’ve never visited other parts of Japan besides Tokyo, Kyoto and Osaka, I was intrigued to find out that a signature feature of Kashiwagi’s dishes is the use of ingredients from lesser-known prefectures in Japan.

This is a result of her collaboration with MoguShop, a one-stop local Japanese e-grocer that curates and imports high quality Japanese snacks and produce not commonly found outside of the country.

“Welcome, welcome! Nice to meet you!” Kashiwagi and Rebecca Kwan, the co-founder of MoguShop, exclaimed, once we stepped past the door and into Kashiwagi’s cosy abode.

At first glance, what stood out to me about the two recipes were the ingredients, many of which are premium Japanese imports that are exclusive to MoguShop in Singapore. 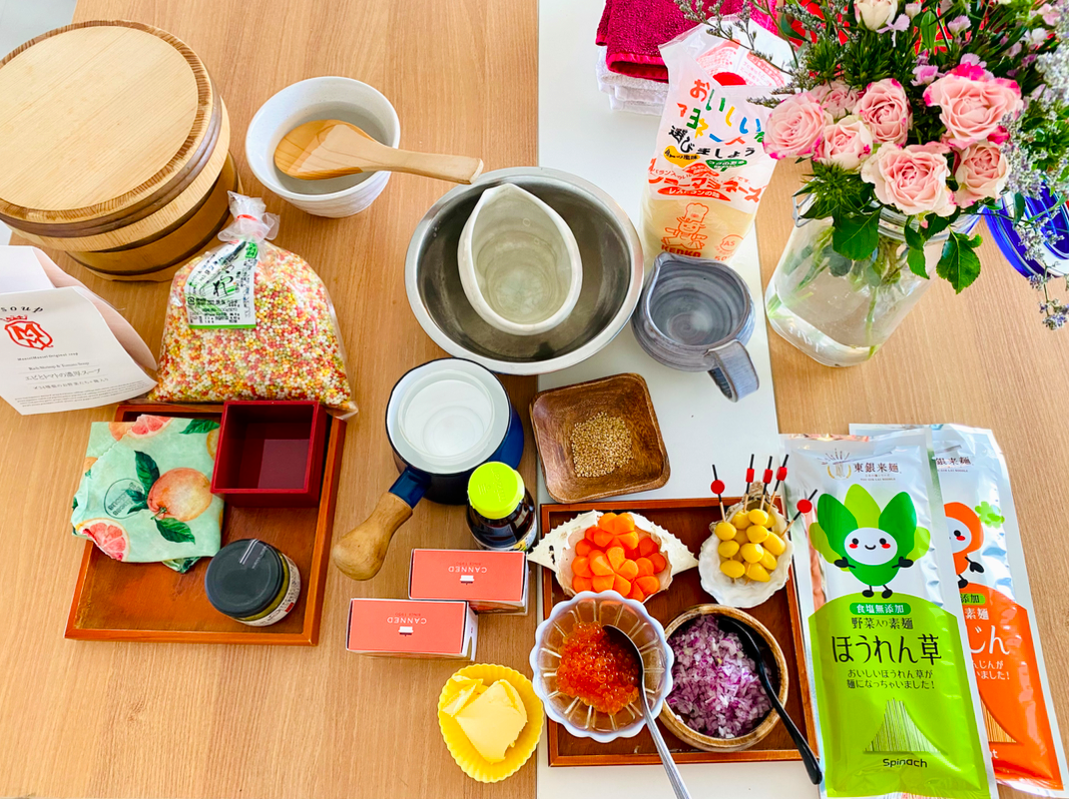 In fact, many of the ingredients used in the two recipes come from two particular prefectures in Japan - the Yamaguchi and Miyagi prefectures.

Located in the westernmost part of Japan and along the coastline, Yamaguchi Prefecture is surrounded by the Japan Sea, Seto Inland Sea, and the Sea of Hibiki.

It has many historically significant sites, especially that of the Samurais. During the summer, they are best known for their range of citrus fruits.

Miyagi Prefecture, or Miyagi-ken, is located in the southern Tohoku Region and has been a leading food producing region for over four hundred years.

From Michelin-starred restaurants to seafood huts and farmhouse cafes run by the fishermen and farmers themselves, Miyagi prefecture is a hub for food, especially seafood.

According to Kwan, MoguShop has launched partnerships in four Japanese prefectures: Miyagi, Saitama, Okayama and Yamaguchi, as well as Japan Mall, a platform that that features products from all over Japan, including smaller prefectures such as Miyazaki, Fukui and Mie.

When it was time to begin the class proper, Kashiwagi started by frying a few pieces of shiso leaves, an aromatic herb that has a fresh, citrus flavour. 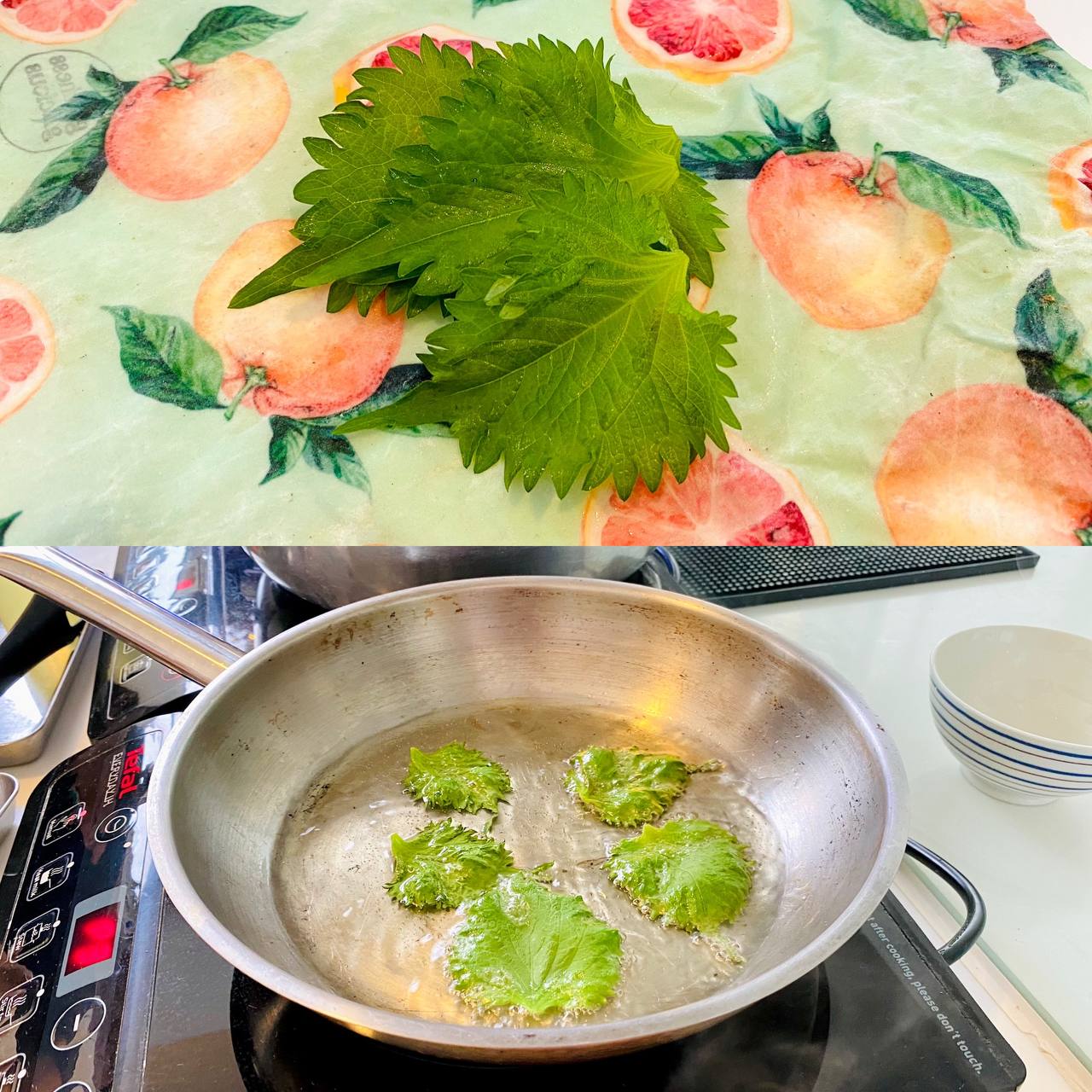 These fried shiso leaves would later be used as garnishing for the Sakura Ebi Rice Ball with Rich Shrimp and Tomato Soup.

After the shiso leaves were fried and put aside to rest, Kashiwagi chopped up two pieces of Sakura leaves and mixed them together with the rice and ebi mixture that she had already prepared beforehand. 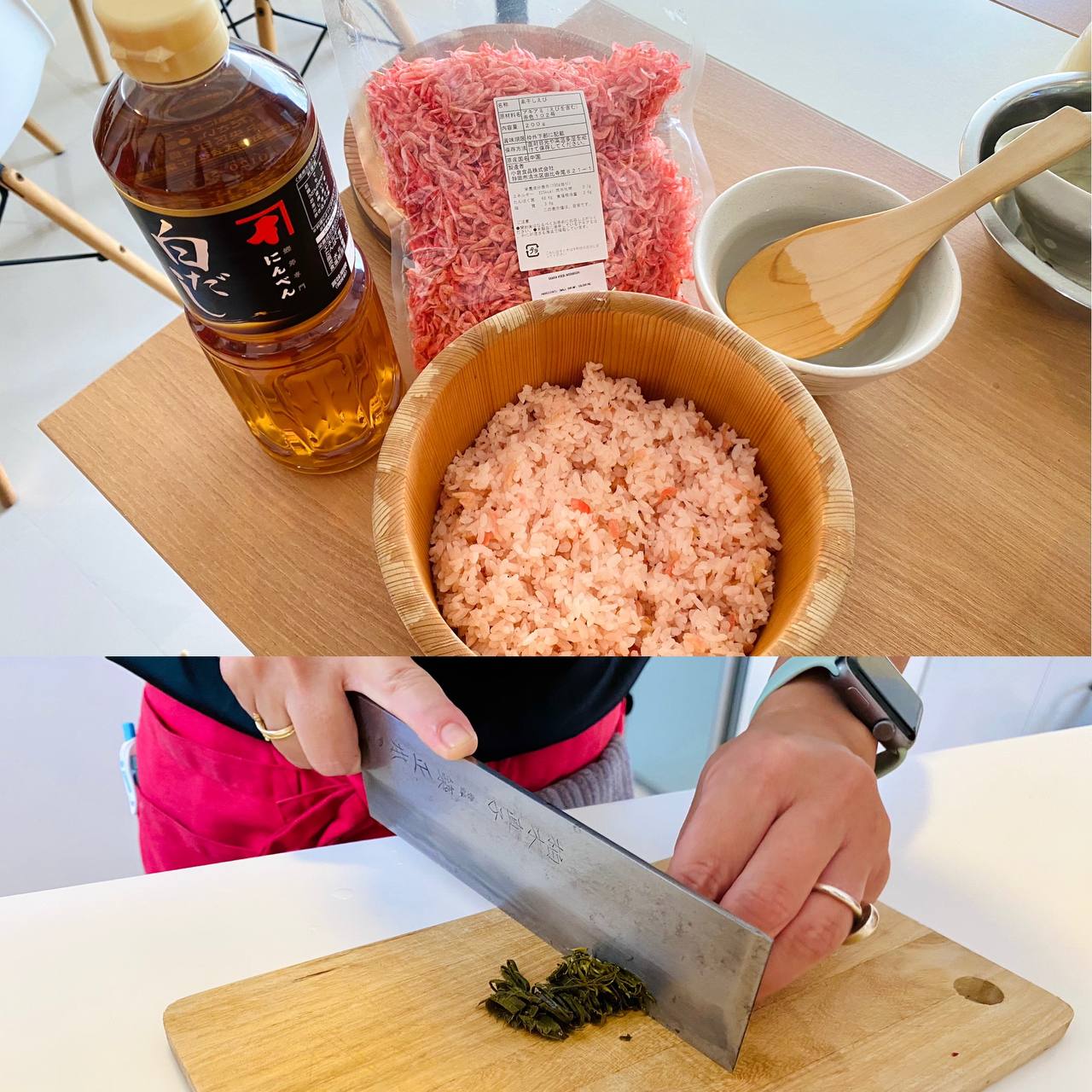 The next step fell on us to roll the rice into tiny, palm sized rice balls, which were made possible thanks to the very handy cling wrap Kashiwagi had in her kitchen. We dipped each rice ball into a container full of tiny Bubu Arare (rice crisps), which gave them a colourful and appetising appearance. 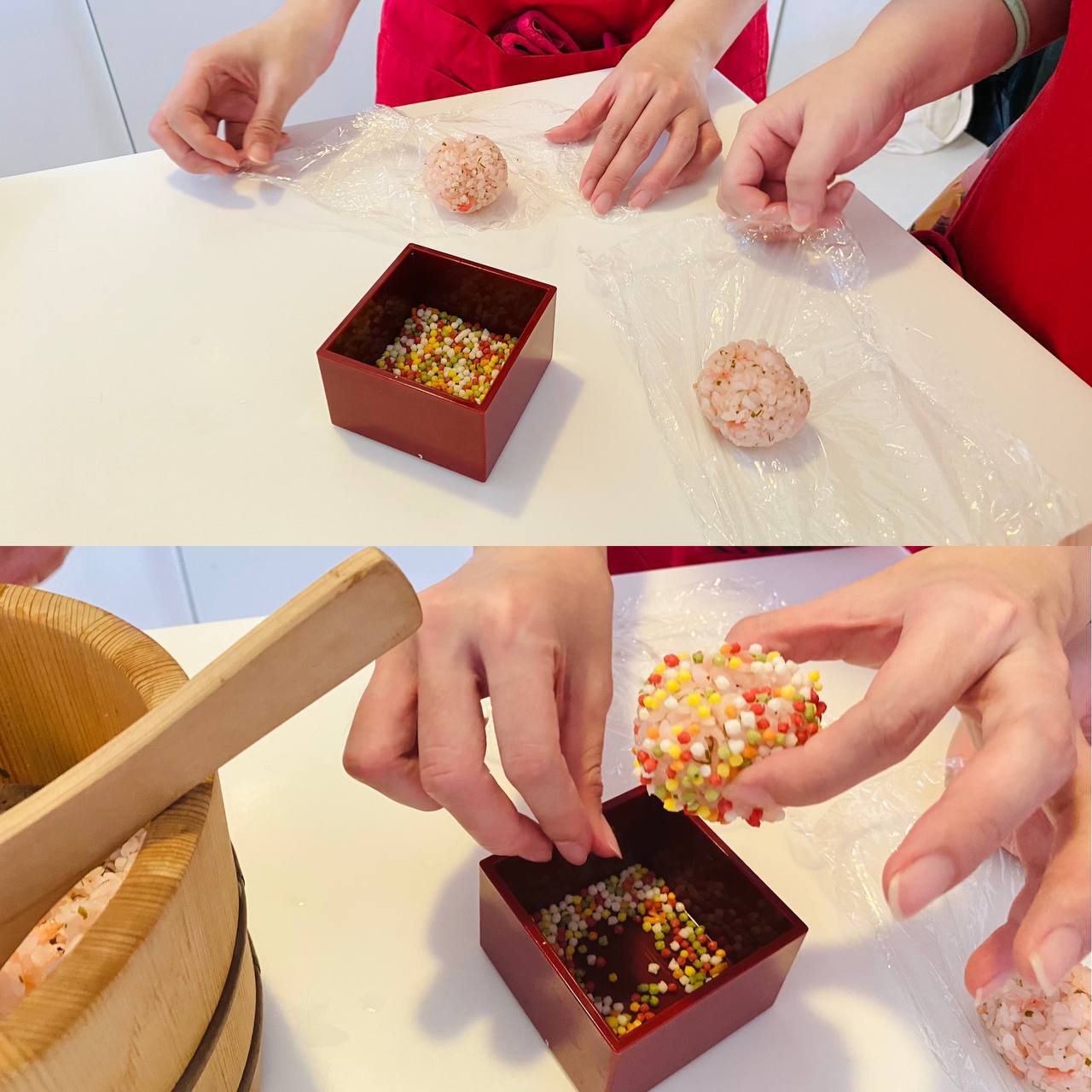 Fortunately for us, the soup for the dish came ready-made in packets, which we conveniently heated up and poured into serving bowls.

All of their soups are made using “Maazel paste”, a unique mixture of 34 kinds of purely domestically grown vegetables as well as rice koji (the mould behind sake, soy sauce and miso). The final step involved placing each rice ball in the centre of each serving bowl and garnishing it with the fried shiso leaves from earlier on.

Dish two was a tad bit more complex than dish one as it involved the cooking of somen (thin noodle made with wheat flour), the mixing of sauces, as well as some nifty food styling.

Nevertheless, Kashiwagi was patient and kind throughout the whole process, guiding us along every step of the way.

We started dish two by making the sauce dressing for the dish.

This required mixing 150ml of Yuzu Ponzu (a Japanese citrus sauce made of soy sauce and citrus juice) and 250ml of water together, followed by heating the mixture with two tablespoons of butter until they mixed well. 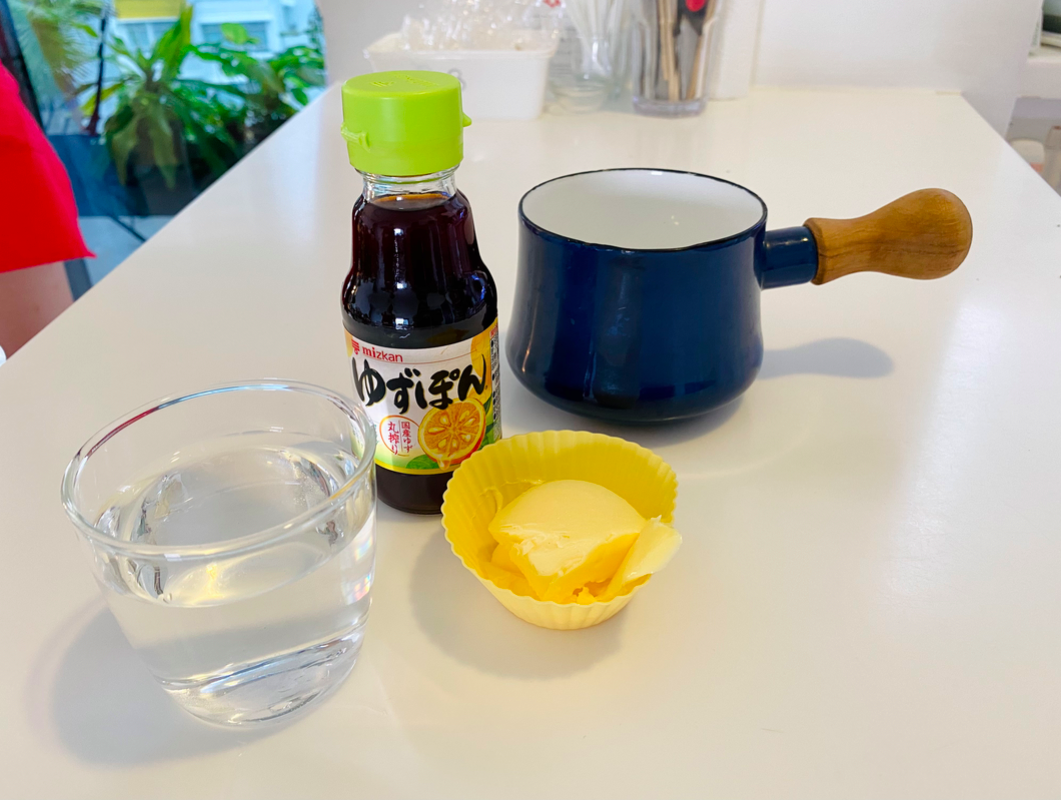 We then boiled two half-packets of somen in water for around two to two and a half minutes. 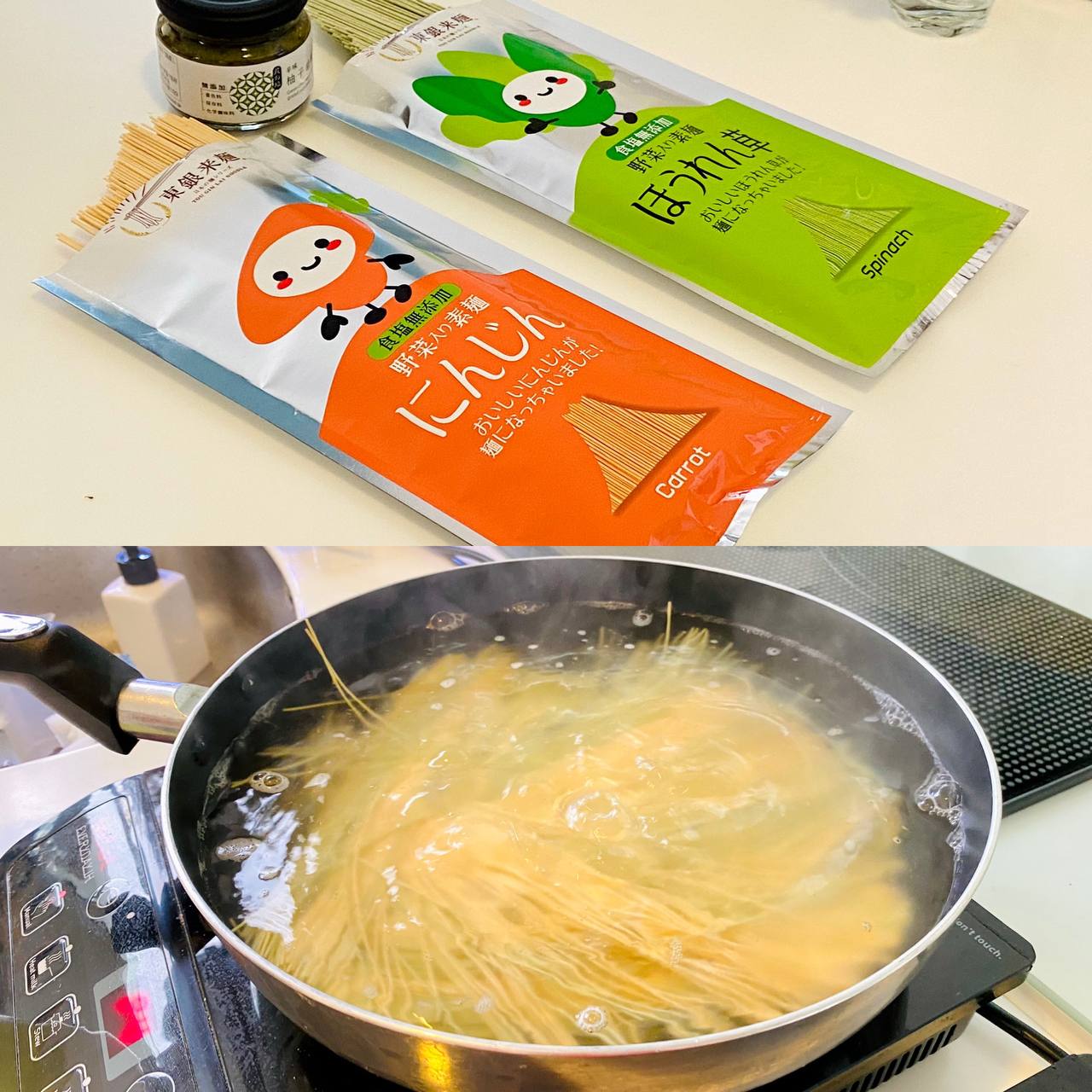 According to Kwan, these packets of somen (available in Carrot, Spinach and Purple Potato flavours) are made with no salt nor added colourings, which make them a healthy and nutritious choice for both the young and old.

As a result of a special manufacturing process, the noodles are also able to retain their elasticity and the texture of regular somen.

After draining the water from the noodles and rinsing off excess starch with cold running water, we set the noodles aside to cool.

This was followed by opening two cans of silver salmon, mashing it up and mixing it together with a tablespoon of mayonnaise and a teaspoon of Yuzu Kosho (a type of Japanese seasoning made from chilli peppers, yuzu peel and salt, which is then allowed to ferment). Kwan shared that these cans of silver salmon are caught directly from Miyagi and are free from chemicals and added preservatives.

Its meat is also incredibly tender and can be easily enjoyed by itself, or as an added ingredient to baked goods.

On the other hand, Yuzu Kosho was added to the salmon mixture to create depth and elevate the flavour of the dish.

Once this was done, it was time for plating.

Kashiwagi brought out a leaf of lettuce and laid it on a plate - this would form the base of the dish. 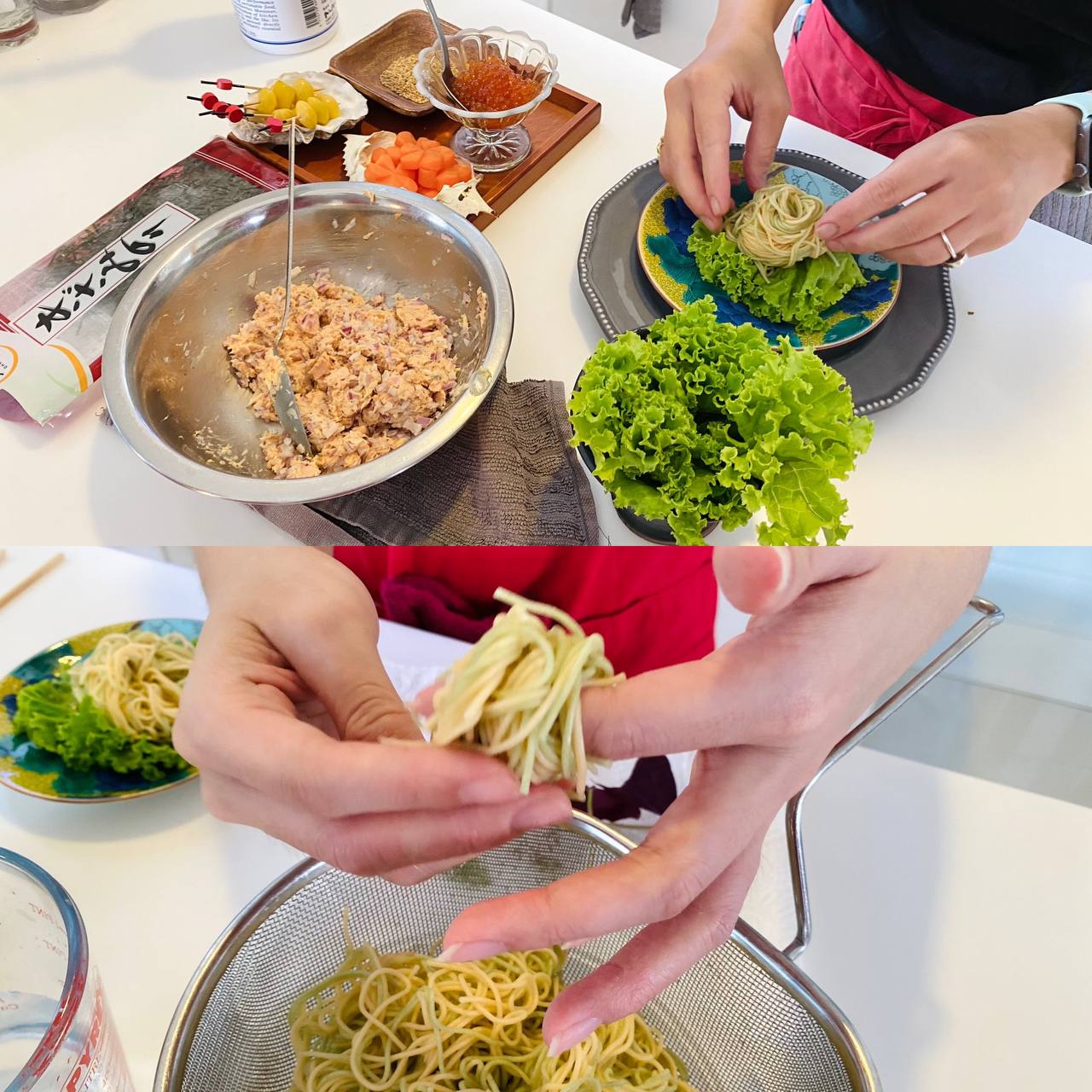 She then took a small portion of somen and twirled it around her fingers to form a ball-like shape, before placing it on top of the lettuce.

A spoonful of the silver salmon mixture was scooped onto the noodles, followed by accessorising the plate using a pre-cut, pre-boiled slice of carrot and small stick of ginkgo nuts. 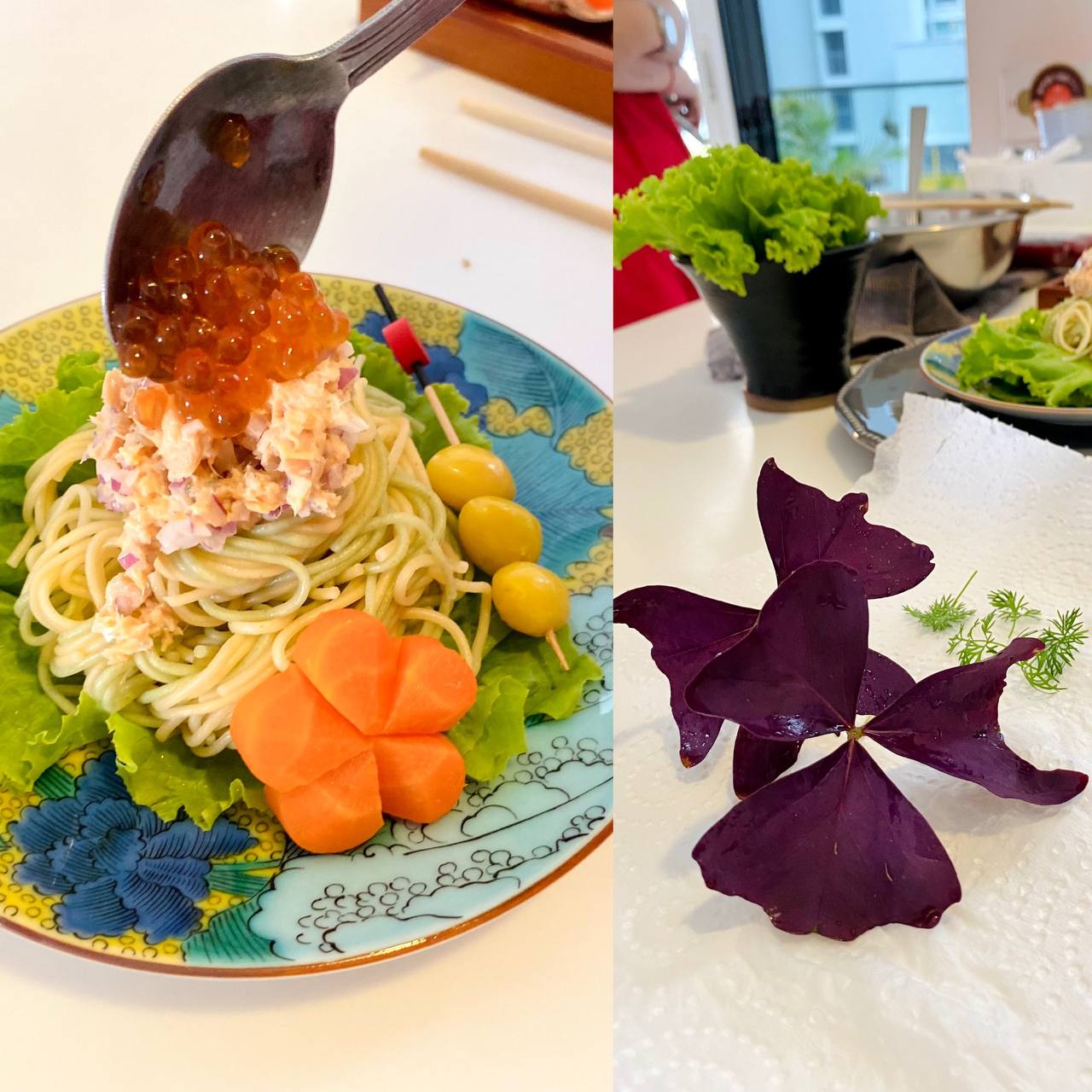 The final few touches involved garnishing the top of the dish with some ikura and sesame seeds, along with a purple butterfly leaf plucked from Kashiwagi’s very own garden. 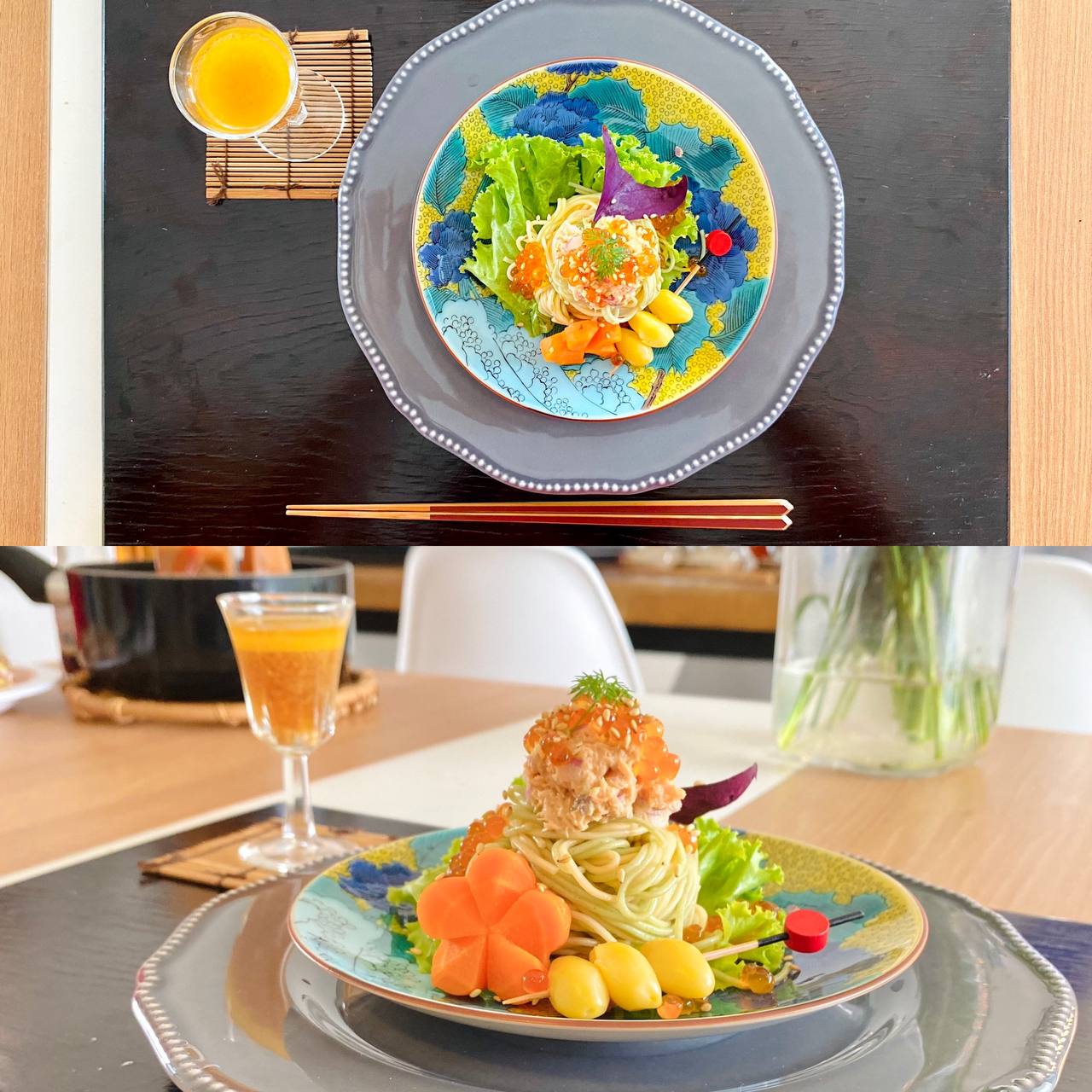 (In case you’re wondering, the small cup by the side of the tray contains the butter ponzu dressing meant to be eaten with the noodles.)

Of the two dishes we made, my favourite was the Healthy Spinach Somen Salad with Salmon and Butter Ponzu Dressing.

The somen was soft and springy, pairing extremely well with the salmon and butter ponzu dressing, which was rich and tangy to the palette.

The Shrimp and Tomato Soup tasted hearty and delectable, although I would have preferred pairing the Sakura Ebi Rice Ball with an element of meat - perhaps cooked shrimp or even a beef patty.

While we were savouring the dishes by her balcony, Kashiwagi also recommended a bottle of Sake from MoguShop to drink along with.

We found out that the Hakkaisan Tokubetsu Junmai Sake is produced only for export to markets outside of Japan.

The rice is polished down to 60 per cent to produce a clean, junmai-style (pure rice style) sake.

Although I don’t drink much alcohol, I still appreciated the drink’s well-balanced, mellow and elegant flavour, which is tailored to match not only delicate Japanese cuisine, but also a wide range of foods from other cultures.

All in all, I really enjoyed my time at Kashiwagi’s cooking class, and was impressed by her patience and know-how in conducting the session.

If you’d like to learn how to make authentic Japanese fare in a comfortable and relaxed setting, you should definitely sign up for any of Kashiwagi’s cooking classes.

Currently, Kashiwagi is having a S$10 discount for her izakaya cooking class in the month of July.

Here’s what you have to do is to redeem this discount:

If you’d like to purchase the ingredients used in the above two recipes and more, you can also check out MoguShop’s website here.

They are currently having a 10 per cent sitewide discount with no minimum spend using the code MOTHERSHIP10.

This sponsored article by MoguShop allowed this writer to experience a Japanese home-style cooking class for free.