For former practicing lawyer Naomi Lim, showering was once a regular day-to-day activity that the 32-year-old would approach with some trepidation.

“When I was a kid, showering would hurt a lot and it was a regular source of pain for me,” she shared.

“It was so frustrating because if I don't shower, my skin will itch, but going through the shower was a painful process.”

It’s something that she has struggled with almost all her life – even before she even turned two.

Her parents had brought her on her first overseas trip to Perth, Australia, where she developed what they thought was a skin reaction to the dry air which caused her to itch and scratch, but it gradually got worse.

“At that point, I think they were thinking that it was just a temporary reaction to the climate, and it would probably get better once we returned to Singapore,” shared Lim.

According to medical resources, atopic dermatitis is a chronic condition with symptoms often appearing in the form of itchy, dry and inflamed skin, which may sometimes be cracked, scaly or raw from constant scratching.

Growing up, the unbearable itch would often cause her to scratch till her skin tore.

Waking up to sheets spotted with blood and ooze was also a regular occurrence due to the open wounds.

Her parents tried everything in their power to offer her some relief, but nothing appeared to work.

Either that, or their effects never lasted long enough.

The common areas where her atopic dermatitis patches would surface were at the creases of her elbows and knees, then other parts of her body like the neck and subsequently her face.

Eager to alleviate her symptoms, Lim has also gone through alternative therapies such as aromatherapy oil blends that her mother bought for her to try, and traditional medicines.

“The aromatherapy oil felt nice for a while, but the effects wore off, so we didn’t continue,” Lim shared.

Once again, it was back to the drawing board.

Lim was not the only one suffering, her parents too, would be affected whenever her skin flared up.

“Their main priority was me feeling better, so when I got frustrated, they got frustrated as well. I guess they were a bit helpless when we couldn’t find something that worked,” said Lim.

The usual triggers for her atopic dermatitis are a lack of sleep, stress, and exposure of the skin to dust and perspiration.

That meant having to miss out on outdoor PE classes in school when her flare ups got bad, which gradually made her feel left out as she watched her classmates at play.

Puberty was a particularly difficult period for Lim, who remembers being very self-conscious.

She would wear longer-sleeved shirts and long pants whenever her skin was particularly flared up.

“It also does help to not feel so exposed,” she added of her skin sensitivities.

“Looking back at some pictures with my friends, I would feel like I stood out,” she recalled, not that photo-taking was an activity she particularly enjoyed either.

The then teenager would also cover up to avoid questions from curious and insensitive, strangers.

“Some people would think it’s infectious or tell me, ‘You don’t look well’.”

It was also a way to avoid discussing her skin condition with friends and family who, though well-meaning, could be quite insistent when it came to their advice for her.

Lim would often feel overwhelmed in such instances.

“It made me feel like my skin condition was something that could be easily resolved and it was my own fault that it wasn’t getting better. Sometimes even sympathetic remarks would make me feel so uncomfortable because I didn’t want to stand out in that way.”

However, Lim recalled a particularly heart-warming episode in primary school when her form teacher noticed her scratching uncontrollably during an outdoor assembly.

“Without any fuss,” the teacher quietly pulled Lim out of class and into an air-conditioned music room so that she could feel better.

“It’s nice when people notice the discomfort, and she knew how to help in a way that did not draw unnecessary attention.”

Lim’s skin condition also took an emotional toll on her.

On the self-blame that she would inflict upon herself, Lim said: “I thought it was my fault that I couldn’t stop scratching, or that I was not doing enough to moisturise and care for my skin more.”

As an adult, dressing for work would sometimes also be a chore.

Lim had to be careful to prevent fluid from her broken skin from sticking to her clothes, especially during times when she had to appear in court in formal attire.

“It was always a case of figuring out where my open wounds were, so that I could make sure it wouldn't stain my white blouse,” said Lim.

These days, Lim is not so concerned with how her skin looks when it comes to her dressing, “It’s about what’s comfortable but still looks more flattering,” she laughed. 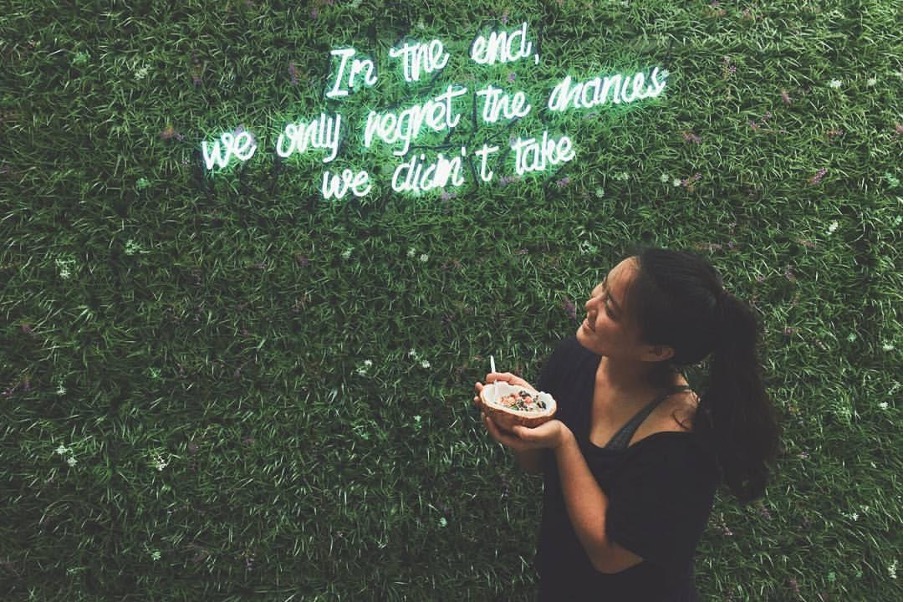 Lim recounted periods where the inflammation would ebb for a while before returning with varying levels of severity, depending on the triggers.

Two years ago, during a particularly bad flare-up, Lim realised she was often scratching herself awake, night after night.

It was a vicious cycle as the sleep deprivation would make her skin condition worsen.

It affected her mood as well.

“I think I was probably not the most pleasant person to be around. I was very irritable, my parents can probably attest to that,” laughed Lim, who has three younger siblings.

“Even without the lack of sleep I’d already feel lousy. Then when I don't get enough sleep, I would be even more prone to losing my temper and I would feel very defensive,” she shared.

At her wits’ end, Lim had decided to seek professional help once again and looked to a General Practitioner for a referral.

It was “fate” as she calls it, that in January 2020, she ended up being referred to a skin specialist, who recommended a new biological treatment method that would set her skin on a course of recovery.

Coincidentally, a concerned colleague had sent her a screenshot of the same treatment for atopic dermatitis that a fellow sufferer posted on social media.

Sleeping through the night ‘for the first time in many months’

Lim got started on the long-term treatment prescribed by her skin specialist, Dr Mark Tang, and responded well to it.

She recalled happily noting down in her journal that “for the first time in many months, I slept through the night and didn’t wake up scratching at all”.

“I think maybe it was the relief I felt that there was something to try, at a time when it felt so impossible.”

She added: “Before that, I felt that even if I was the richest person on earth, I would not be able to find a remedy, so when I did, it was life-changing.”

The incidence of atopic dermatitis in Singapore

Dr Tang shared with us that one in 10 adults in Singapore has atopic dermatitis, which is “caused by an over-reactive immune system that responds to internal or external triggers leading to inflammation of the skin”.

This results in the vicious “itch-scratch” cycle that drives the condition to worsen over time, if not treated properly.

Despite many new advances in the understanding and treatment of atopic dermatitis, many patients do not seek help due to conflicting advice from their loved ones and not knowing where to go for help, he said.

However, Dr Tang urges those with the condition to seek prompt treatment by visiting an accredited dermatologist who can make a proper assessment of the severity of their condition and recommend the appropriate treatment options.

This also ensures that individuals and families cut through the information overload that’s often presented online.

While many patients with mild atopic dermatitis can adequately control their condition with good skincare and lifestyle modifications, those with more serious inflammation will still have to turn to medicated creams and tablets, said Dr Tang.

The use of a good gentle cleanser and moisturiser is important to repair and protect the broken skin barrier.

In addition, to reduce the overactive immune activation in the skin, the use of medicines, such as steroid or calcineurin inhibitor creams, phototherapy and oral or injectable medications, is an essential component of the treatment strategy, shared Dr Tang.

Understanding how many patients are very fearful of the long-term use of steroids, Dr Tang added that thankfully, there are more steroid-free options available for those who are battling severe forms of atopic dermatitis.

“One of the most recent developments in atopic dermatitis treatment is the use of biologics. It is a targeted treatment that precisely gets to the root cause of the inflammation without the use of steroids.” he said.

Lim wants others to know that there’s always hope, and not to give up like she did initially.

“It sounds quite cliched but don’t give up hope, even though it’s so easy to feel like life will never get better. But once you do find something that works, it’s also surprisingly easy to forget how bad it was. This condition doesn’t have to define you."

“Having the right synergy with who you consult, such as your specialist, is also very important, because you’re in such a vulnerable state,” advised Lim.

Added Dr Tang: “We are entering an exciting new era in the treatment of atopic dermatitis, and it is one that offers hope for patients who have struggled with this chronic, relapsing condition for many years. Finding the right support network of family, friends and skin specialist, is also a vital part of the journey.”

Although her skin condition has improved by leaps and bounds, Lim confesses that she still suffers minor flare-ups due to stress or a lack of sleep.

She must also be careful about the skincare products that she uses.

There’s still no such thing as a quick shower for Lim, who takes up to 45 minutes with her washing and moisturising process. But rather than fear, she now sees it as her time for “self-care” and tries to make it as enjoyable as possible.

But Lim sounded a word of advice for those expecting a quick cure-all.

“The tricky thing about atopic dermatitis and skin conditions is that there's no one remedy that works for everybody. You've just got to try your best to keep an open mind.”

This sponsored article is brought to you by Sanofi.