If you’ve been cooped up working from home recently, or cracking your heads over how to spend your annual leave, why not stretch your legs by joining a local walking tour?

You’ll get to see the sights in Singapore and learn some interesting nuggets of information about familiar places.

Two tour companies in Singapore have introduced some rather unique tours by allowing participants to look at history and their surroundings through a new lens.

It’s the age of social media, and documenting your experiences and the places you’ve visited can’t be done without some aesthetic photos for your profile page.

Besides taking people around the culturally rich central areas of Bugis, Waterloo and Kampong Gelam, one “Instawalk Tour” on Klook, conducted by Tribe Tours, also incorporates the art of taking Instagrammable photos.

Participants get to take their own Insta-worthy shots of iconic landmarks and hidden gems while receiving photography tips and learning about quirky facts and historical tidbits about these places.

Taking us on the tour is 55-year-old Tan Boon Yick, who has been guiding for two years. Tan previously held a corporate desk job, but always liked taking friends and colleagues from overseas around Singapore during his free time.

Tan always had plans to become a tour guide for leisure when he retired. Restructuring in his company, however, left him without a job and he decided to fast-forward his tour guide plans instead and took the plunge.

Make no mistake though, the brief amount of time he has spent as an official guide belies his knowledge and expertise. Tan swiftly brings our fairly large group of over 20 people (in safe-distanced groups of eight, of course) through the streets with ease, all the while spouting facts about the history of Bugis.

For example, did you know that Bugis in the 1930s used to be filled with vice?

Brothels lined the streets and prostitutes solicited their services outdoors, until the authorities cracked down on such activities in the 80s to make way for development and the construction of a new MRT station.

Tan joked around that as a group comprising mainly young people in their twenties, he was allowed to share with us the more salacious bits of information (which you will find out only if you join Tan on his tour). Tan then brought us through Waterloo Street, describing it as a microcosm of Singapore, with hawker centres, markets and HDBs juxtaposed with the high-end malls and hotels, as well as the amalgamation of various ethnicities’ places of worship.

One stop along the tour with Tan was the Sri Krishnan Temple at Waterloo Street. After Tan shared more about the various deities displayed on its facade, we were also taught how to use the temple’s colourful walls as an eye-popping background in photos. 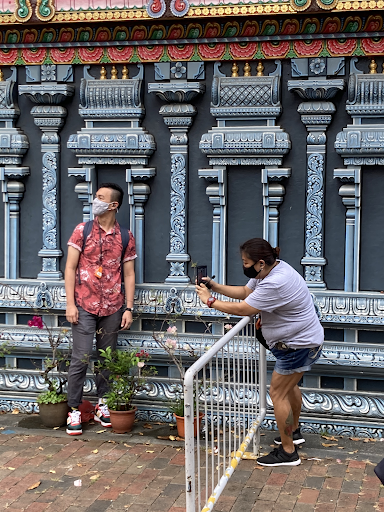 Here’s an example of an Insta-worthy shot playing with the textures and colours of the temple’s exterior.

The next stop in our Instawalk Tour is a nondescript residential estate behind Bugis+. Who knew there were even HDBs in such a centralised area?

Tan shared that the flats were built in the 1980s, and with lesser concerns about land-constraints back then, the corridors of the flat are wider than existing HDBs.

The flats and its distinctive red-bricked facade also made for some rather striking photos in the morning sunlight, and we were encouraged to play with the straight lines and shapes in our photos. As we went about snapping photos, Tan revealed an interesting fact— the gaps in the corridor’s parapet were for children to peek through. This was also to ensure that young kids wouldn’t try climbing the parapets to get a better view.

Unlike a typical heritage tour, the Instawalk Tour is a more interactive experience and your time and money will definitely be well spent. 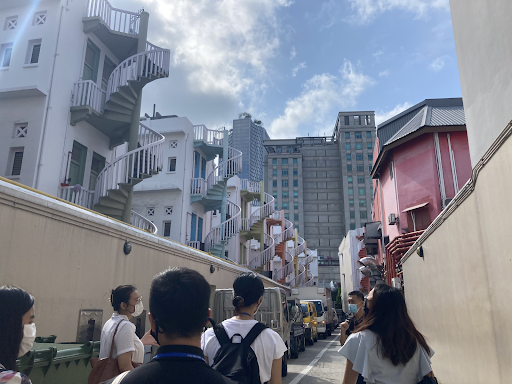 When asked how to ensure tours remain attractive to locals, Tan said, “It either has to be an activity, or a tour they cannot do by themselves, and they can learn something which they cannot do on their own.”

Tan notes that the key to engaging Singaporeans in these tours is to “bring them back to a time before they were born” and show them “things that they have not seen before”. The nostalgia factor is also something that draws people in.

And truly, uncovering a hidden gem like this block of flats, sequestered from modernity, was one of the highlights of the tour.

However, the key to guiding and continuing to engage participants is still the passion one has for the job, Tan said.

It is this that sustains Tan through the three to four tours he conducts a week — not only does he educate participants on the history of the Bugis area, he also facilitates concept tours like the Chinatown Murders Game Tour, and the newly-launched Jewel Heist Game Tour around Jewel Changi Airport.

This is despite the fact that guiding can be quite physically demanding, especially in Singapore’s weather.

Tan says that by working with Tribe, he has “reinvented” himself, and conducting such a variety of tours has helped him overcome the challenges of the pandemic.

“If you’re not passionate about guiding, you’re just doing it to pay the bills, it’s difficult to sustain or you’ll just be an ordinary guide. If you want to be an outstanding guide you definitely need to have the aptitude, the passion and the attitude.”

Now you’ve seen all there is to Bugis, let’s take a short hop over to Kampong Gelam.

Another local tour with a creative spin is Let’s Go Tour’s “Aminah in Kampong Gelam”. As the name suggests, participants are brought around by Aminah.

Aminah is an 86-year-old woman who was born before World War II in 1935, brought up at Kampong Gelam and spent the majority of her life in the area.

She is played by 37-year-old Nur Widarni Isnin, or Dani for short, who has been guiding since 2017. Dani explains that Aminah is a perfectly normal person like any other. She is, however, willing to share tales of her life story, as ordinary and conventional as it could be.

“Whatever you go through, these will be the stories you share with your grandchildren.” To get into the character of an elderly woman more than twice her actual age, Dani paints wrinkles on her face with makeup.

She also dons a lacy hijab that belonged to her late grandmother (“You don’t see people wearing this kind [of hijab] nowadays”) and a flowery baju kurung with a more old-fashioned pattern, which was given to her by her sister.

Starting off the tour at the Let’s Go Tour office at Crawford Lane, Dani slipped into the character the moment she stepped through the office’s glass doors and onto the street.

She carried a wicker basket propped on her hip and walked with a stooped gait.

The first stop was the Alsagoff Arab School, where Aminah stopped to spin a tale of how as a young girl, Aminah had yearned to attend the school which in the 1930s, was meant for boys only. She then gamely sang a song in childhood folk song in Malay outside the school’s gates, saying that this was the song Zulfri, Aminah’s father, would sing to her all the time.

Aminah then continued on through the streets of Kampong Gelam, before stopping at a rather innocuous grass patch.

One of the trees there was a ‘gelam’ tree, with distinctive papery bark. As a kid, Aminah would roll scrape off the flakes and collect them for her father, who worked as a boatman ferrying people between Singapore’s offshore islands and the mainland.

The bark was used by people in the past to repair their boats — once stuck in the open cracks and crevices in the boat’s wooden exterior, it would expand upon coming into contact with water, rendering the boat waterproof and leak-free. Aminah told us that she used to pluck the leaves off the ‘gelam’ trees. When crushed, the leaves give off a medicinal aroma, and is used to produce a tonic commonly used by people in the past for headaches and other muscle aches, called cajeput essential oil. Now, the tonic is no longer manufactured in Singapore. Aminah then brought us to a shophouse in front of the Sultan Mosque. This, she said, was her childhood home. Aminah’s story soon took a dark turn when she shared how she survived through the death of her father during World War II.

Dani, who played Aminah, peppers her story with theatrical expressions and gestures as she mimics cowering from the caterwauling sirens during that period.

The inclusion of the dramatic war segment in Aminah’s story was to ensure the narrative Dani built up with Aminah had a climax, Dani later shared. Additionally, Dani’s own late grandmother had lived through the war in Singapore — “I know the pain she went through”.

Listening to Aminah’s story certainly makes for an interesting twist to the conventional tours. It enables readers to step back in time and view Singapore through the eyes of someone, albeit fictional, who has witnessed its development.

Aminah, Dani says, is sort of a “tangible artifact”, and someone who has all the answers to the past, and this is what “enhances” the tours, further engaging people in an unconventional way. A childhood dream to act

Dani also shares that her passion for guiding and bringing the character of Aminah to life stems from a childhood dream to act.

“I’m just bringing out the makcik-ness (auntie-ness) in me, I don’t have someone that I’m imitating.”

“I’m naturally animated, loud, noisy, chatty, so that stage that I have is perfect for me. And I’m happy telling [people] about my culture, showing them a place that’s close to my heart.”

Convinced to head out for a walking tour around Singapore now?

If you would like to hear more about Aminah’s story or Tan’s tales, you can check out Klook’s tours here, where there is currently 10 per cent off all walking tours in Singapore.

This sponsored article by Klook in collaboration with the SingaporRediscovers campaign, brought the author out of her office to learn new things about Singapore.