Every day, we live the mundane lives we are used to. Get out of bed, go to school/work, go home. Once in a while, we go for a holiday if the situation permits.

We give little thought to the dangers we unknowingly missed or the people working hard for us to enjoy the sanctuary we’re used to.

If we truly scrutinise our lives, we might realise that we’ve taken the people behind the safety and security that we enjoy for granted — at least, that’s how I felt after listening to these seven Immigration & Checkpoints Authority (ICA) officers.

Counterfeit passport sounds like part of the plot of a spy movie until you realise it's a real situation that ICA officers deal with at the checkpoints.

Fiona Lai, who leads a team of ICA officers, says, “Travellers would claim that they have purchased these counterfeit passports from agents at a certain cost.”

The 26-year-old has been working at ICA for a year. She works with a team of 40 officers deployed at Changi Airport's immigration hall.

“It’s so much more than stamping of passports,” Lai tells Mothership about her job.

But the jovial team leader shares that the most rewarding part of her work is when members of the public appreciate her for her hard work with a gesture as simple as a warm smile.

Her coworkers, who hold the same vision of keeping Singapore safe, also motivates her.

Watch our interview with Lai here:

2. Living his childhood dream as an investigation officer

If you dreamt of becoming a law enforcement officer after watching countless Hong Kong crime dramas as a kid, you’re not that different from Liew Shi Xiong.

Like many of us, Investigation Officer (IO) Liew grew up watching films by Johnnie To and John Woo, which inspired him to become a law enforcement officer. 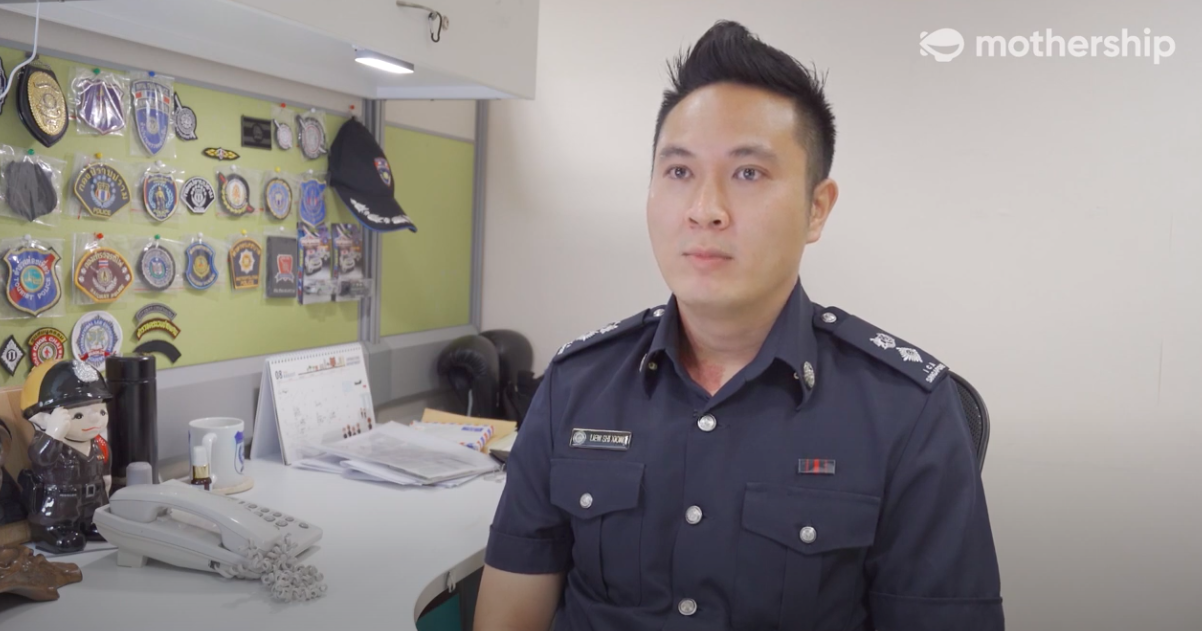 Decades later, the 35-year-old is now the Officer-in-Charge (OC) for the Special Investigation Team — Enforcement Division.

That was a mouthful. So what exactly does Liew do?

He describes his work as “playing a jigsaw puzzle”.

Other than interviewing and recording statements from suspects and witnesses, Liew sieves through all the information received by ICA before piecing the important parts together.

The IO estimates that the longest interrogation he’s done is around 12 to 15 hours, with breaks for the interviewee in between.

Most of Liew’s work involves illegal immigrants, harbourers and employers of immigration offenders, and marriage of convenience syndicates.

What, then, is the key to success in this job?

“A good IO should be… kaypoh,” Liew summarises.

Officers have to be relentless in asking questions and chasing for information regarding the subject.

Every piece of information can be salient to solving a case.

If you’re harbouring hopes of chasing your childhood dream, watch this:

Ever watched a movie and wondered if a scene reflected the situation in real life?

We have — that’s exactly why we asked Muhammad Fadhli, a Task Force Officer at Woodlands Checkpoint, to react to how border security is being portrayed in some of our favourite movies. 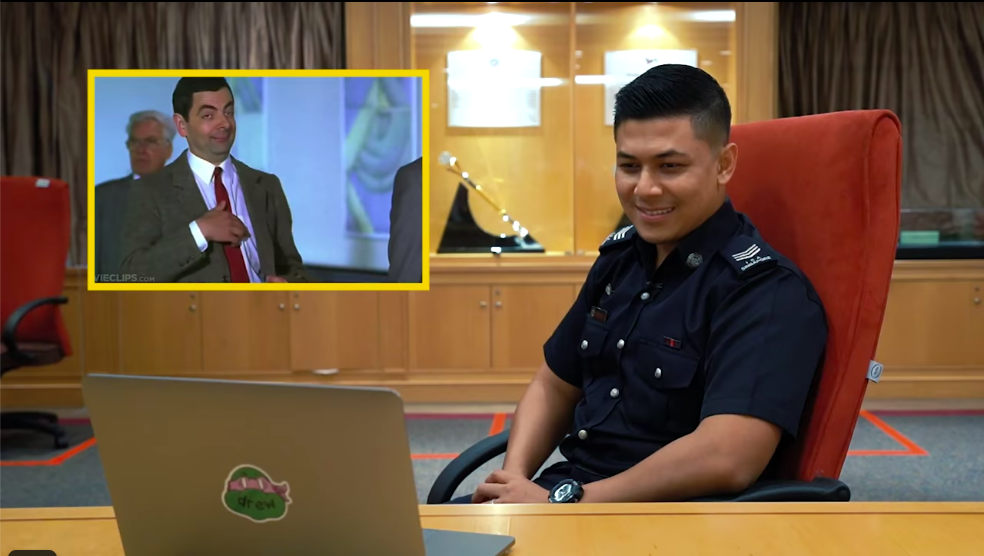 Fadhli’s professionalism and passion for his job shone through with his eagle-eyed observations.

For example, Fadhli quickly pointed out that Billy Hayes (played by Brad Davis) from Midnight Express wore shades to avoid eye contact with the authorities.

While his bag was being searched, Hayes chewed gum to hide his nervousness — a common tactic used by suspects.

“(The area above one’s stomach) is a common place for a subject to conceal items — contraband items — underneath their clothing,” Fadhli says, adding that seeing such scenarios on his job is “quite normal”.

As a Task Force Officer, Fadhli has to profile travellers, conduct interviews to find out the intentions of suspicious travellers, and observe their behaviours.

While some movie scenes reflect his job scope, Fadhli explains that Task Force Officers have the responsibility to take every situation grievously as they play an essential part in keeping Singapore safe.

Did you know that your parcels could risk being contaminated by radioactive material? I didn’t.

Prasad, a Radiographic Image Analyst at ICA, leads a team of “specially selected officers” at Pasir Panjang Scanning Station. Their job is to analyse scanned images of containers to ensure that no dangerous goods enter Singapore.

A few years back, a consignment of bamboo charcoal pillows triggered the radiation alarm as it was going through radiographic scanning at Pasir Panjang Scanning Station. Upon inspection, it turns out that the pillows — initially meant for sale in Singapore — were emitting radiation.

The pillows were eventually sent back to its country of origin.

Through the various equipment ICA owns, the officers were able to identify the source location of the radiation as well as the type of radioactive source hidden in the container.

These intricate checks led to the exposure of wildlife trafficking attempts like elephant ivory and pangolin scales, for example.

According to Prasad, who has been working at ICA for 26 years, to qualify as a Radiographic Image Analyst, you’ll need to have strong attention to detail and be passionate about the job.

Think you’re up for it? Watch the Radiographic Image Analysts at work here:

Before Covid-19 temporarily shut down leisure travel, Woodlands Checkpoint was one of the busiest land checkpoints in the world.

What do the ICA officers do to safeguard our borders at Woodlands Checkpoint?

As a Primary Screening Officer, Akio Wong's job includes profiling travellers to ensure that they do not have dubious intent when entering Singapore. Although the Singapore-Johor Bahru border is still closed for leisure travellers due to the ongoing pandemic, Wong’s job is not less relevant today.

Since July 2020, all automated and manual immigration lanes and counters at the passenger halls of Singapore's checkpoints have been equipped with the Multi-Modal Biometric System (MMBS), including Woodlands Checkpoint.

Wong led us on a short tour of MMBS.

Immigration clearance is expected to be more convenient and efficient with MMBS, which uses iris and facial biometrics.

According to Wong, who has been working at ICA for three years, iris and facial scans taken together are more accurate than the traditional thumbprint security model.

Furthermore, the technology allows ICA to capture the traveller’s biometrics without any physical contact with the machine, which is especially important, given the current Covid-19 situation.

Echoing Lai’s statements, Wong told Mothership that his coworkers are his favourite part of working at ICA: “If you encounter something difficult, everyone is in it together.”

Watch our interview with Wong here, where he shared a tip on how to get across the Causeway quicker when the borders reopen for leisure travel:

“The gunman is alive, last seen moving towards (the) train track. Please proceed with care.”

What would you do if you hear this in the middle of your job?

For First Response Team Officer Mohammed Syamil, attending to such situations during his operations or training is part of his daily job. 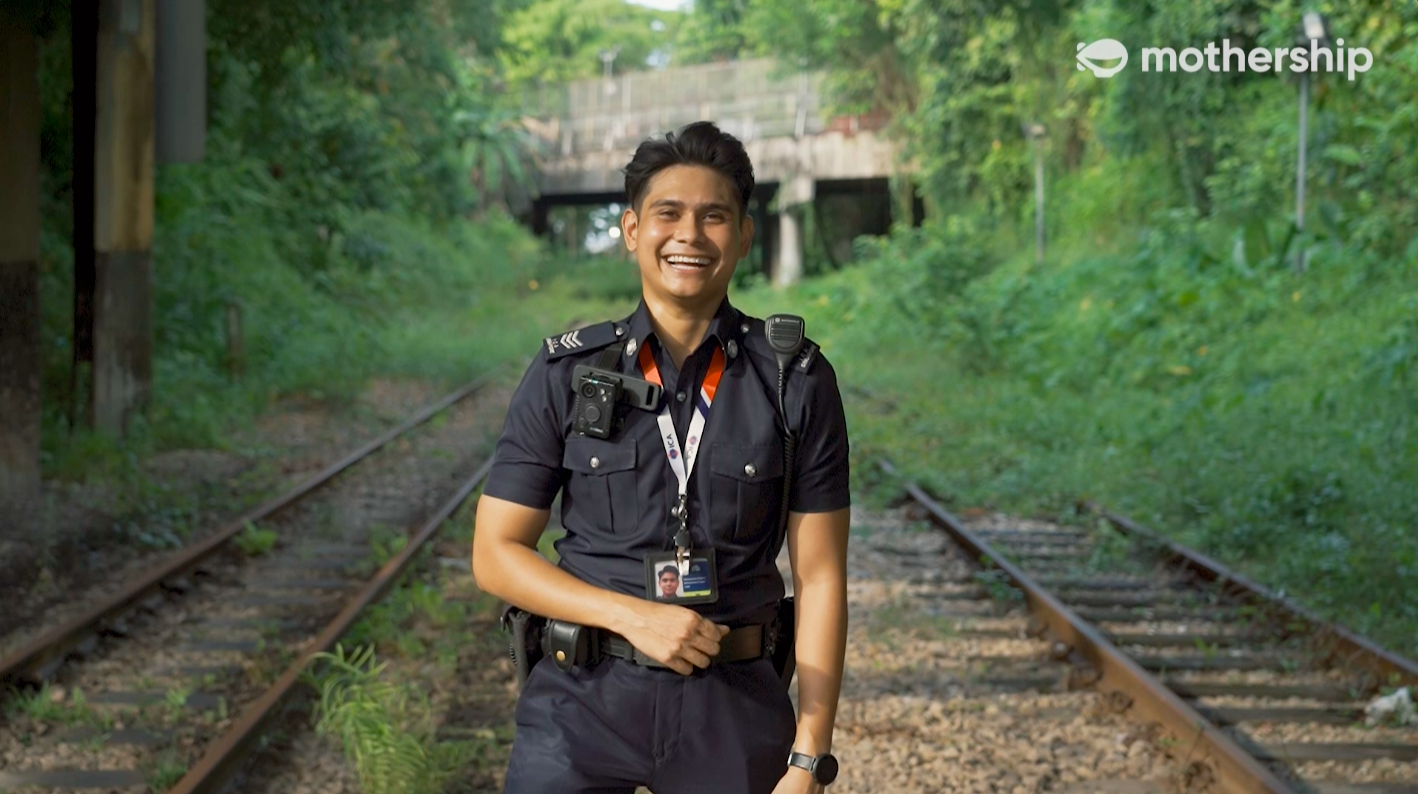 The sergeant is part of a team of specially trained officers in charge of various areas of security relating to potential threats and protective security around Woodlands Checkpoint.

Besides supervising Woodlands Checkpoint, Syamil’s team does at least two operations a day, including their day-to-day trainings.

On one occasion, Syamil was summoned to attend to a potential bomb threat after a black box with protruding wires was found at Woodlands Checkpoint.

Although the box turned out to be not an explosive item (fortunately), Syamil recalls the incident vividly:

“It highlights the fact that we have to be fast in our response, [and] we have to be quick and decisive. At the same time, our incident management skills have to be top-notch.”

How do you become a successful First Response Team Officer?

According to Syamil, you need to have an “outstanding sense of responsibility”, as well as the ability to adapt to changes in a quick but composed manner.

Here’s what a day in Syamil’s life as a First Response Team Officer looks like:

Ultimately, what these six officers at ICA have in common is their determination in working towards a common goal: keeping Singapore safe.

If you’re excited by the prospect of joining a team like that, you can find out more here.

This article sponsored by ICA made this Mothership.sg writer realise how much work goes behind protecting Singapore from threats.