In a nondescript seven-storey building in Tai Seng sits a 40,000-square-foot kitchen.

In case you’re trying to wrap your head around how large that is like I was, that’s the amount of floor space you’d get from 60 three-room flats — if all of them, bedrooms and all, were converted to kitchen space.

This is the type of space we’re looking at when we talk about central kitchens, one of which we had a chance to visit for the first time. This kitchen, run by RE&S, handles 500 different ingredients like flour, rice, eggs, seafood, and vegetables, on an average day. These exit the kitchen and make their way to more than 70 shops and restaurants in the form of noodles, baked goods, sushi rice, and thousands of ready-to-eat bento meals.

And thanks to the Singapore Food Agency (SFA), we visited RE&S’s central kitchen to take a behind-the-scenes look at all that cooking.

RE&S is one of Singapore’s largest restaurant operators. Chances are, even if you are not familiar with that name, you’ve probably heard of their restaurants.

This makes a lot of sense once we learn what is being prepared here: rice, soup, sauces, baked goods like bread and cheesecakes, as well as three kinds of noodles – soba, ramen, and udon.

That’s not all. They also supply food ingredients to other food service and hospitality businesses, and prepare convenient ready-to-eat bento meals for various retail outlets.

All this is made possible by a fleet of nine cold trucks. These trucks send the prepared food to locations as far away as Ichiban Sushi at Changi City Point, and Ichiban Boshi at Jurong Point and Causeway Point. More on that later, though, before we get ahead of ourselves. 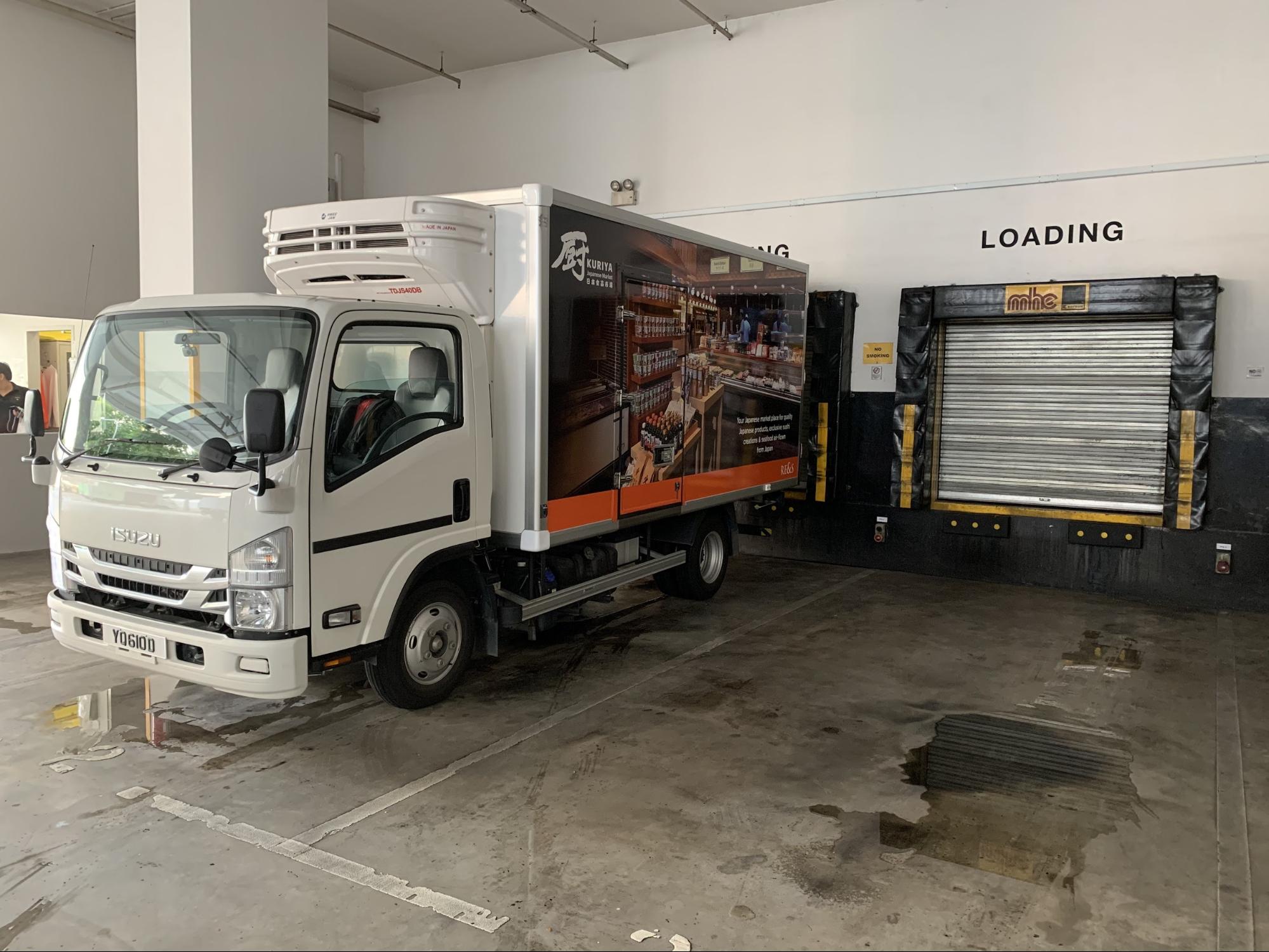 The tedious process before we even step in

After a basic introduction to the facilities, I’m brought to the entrance of the food preparation area proper. I’m handed my very own set of protective gear: gown, shower cap, face mask, shoe covers, and gloves.

Just the gear alone isn’t enough, though. I’m also given a handheld roller with sticky tape, which catches any stray hair or dirt that may have gotten stuck to my gown and clothes. 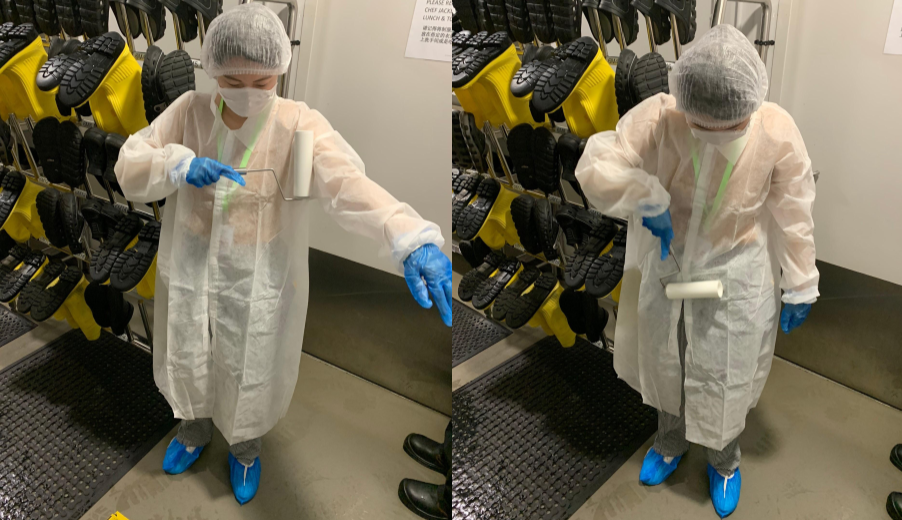 It is at this juncture that it occurs to me that the protective gear is to protect the food from me, and not the other way around.

Then we wash our hands for strictly 30 seconds — yes, there is a timer, activated by a motion sensor (how pertinent things like this are in this time especially!).

The last step we need to take before entering the food preparation area is to step into a special "air shower sanitising zone", which blows away any stray dust or hair which may have settled on my gown.

All of this is to ensure that anyone entering is clean and does not contaminate the food preparation area. 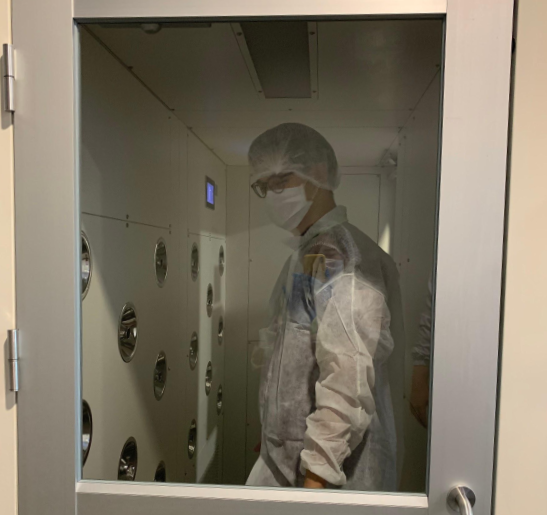 Pushing carts of equipment and food, staff in white uniforms greet us chirpily as we walk by – Japanese company culture, explains our host.

If not for the tantalising smell of freshly-baked bread and steaming rice, you would be forgiven for thinking this was a research lab. You might not even recognise it as a kitchen unless you’re already familiar with the place.

So here are some of the things that help a central kitchen operate at the scale it does:

A lot of the work here is done by machines. 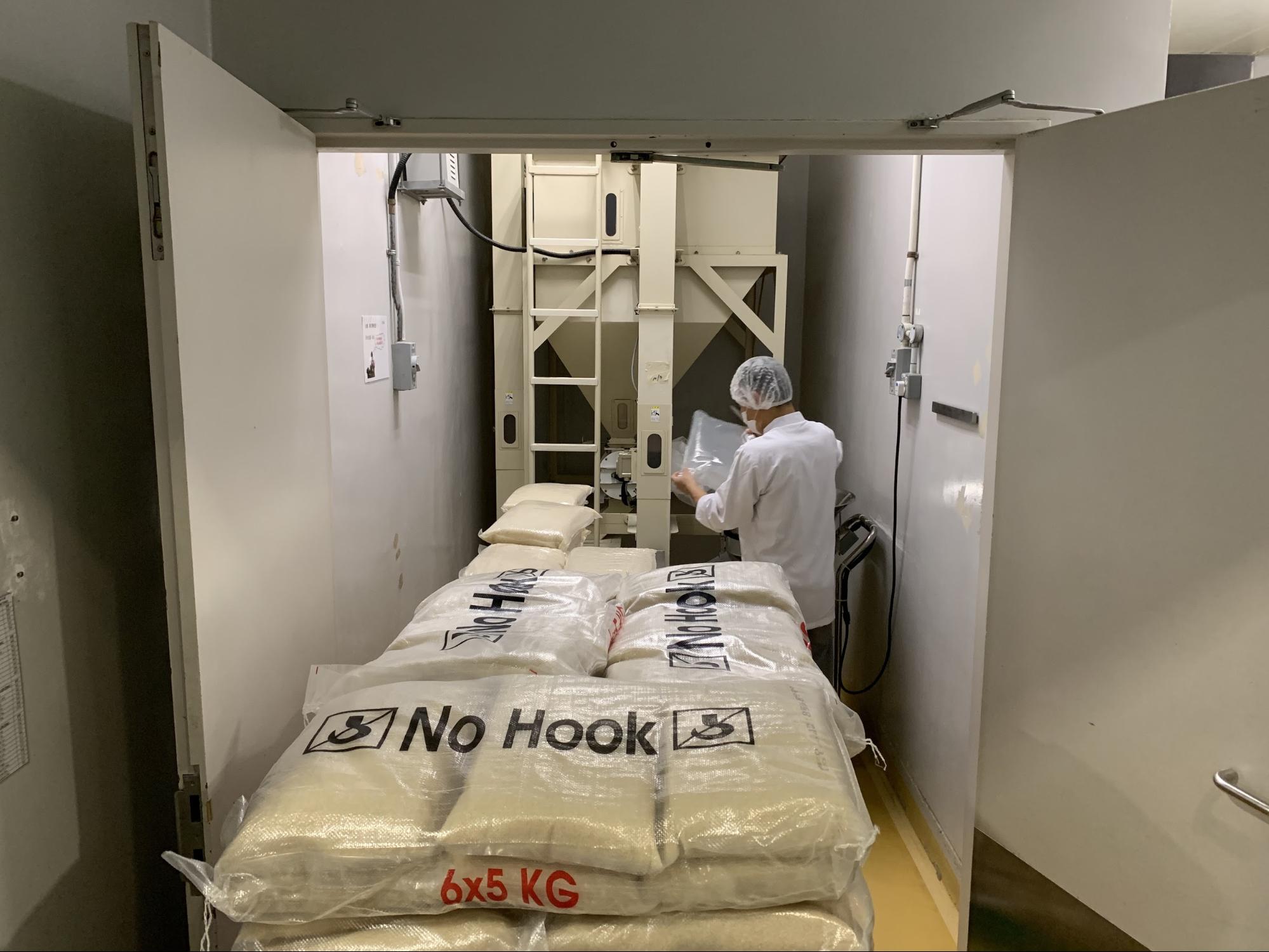 On average, 2,000kg of rice moves through this facility daily. And I’m told that this is nowhere near their maximum capacity.

Everything here is super-duper jumbo-sized. Like this braising pan, which will soon churn out 160 litres of sauce:

And thanks to the use of machinery, RE&S is able to achieve pretty amazing precision with their products. Just look at these perfectly uniform tamago omelettes:

You might keep going to a restaurant that’s really good, but would probably think twice if it’s only really good some of the time. That’s why standardisation matters - not only making it easier for omelettes to be arranged photogenically on a tray, but also ensuring consistency and reliability.

Quality is nothing without food safety

Consistency in terms of tastiness and food quality are important, but that would quickly become irrelevant without consistent food safety and good hygiene. After all, eating contaminated or expired food can lead to serious consequences.

Therefore, all of the production at the central kitchen takes place under strict quality, safety and hygiene standards. Besides food safety standards set by the SFA, RE&S also follows ISO standards, and the standards set by their customers. These standards are used to set up what’s called the Food Safety Management System (FSMS).

The FSMS is a plan covering all aspects of food safety, setting out the roles and responsibilities of different team members, the resources available to ensure food safety, as well as cleaning procedures and pest control.

Which is why it makes sense that the food safety team at RE&S is made up of members from different departments such as the Quality Assurance, Purchasing, and Production departments.

One member of this team is Yip Yit Hong, who’s the head of production at RE&S’s central kitchen, and one of the central kitchen’s seven Food Hygiene Officers (FHOs).

As an FHO, Yip helps to implement the food safety plans, monitor the various processes, and verify that they are going according to plan.

While Yip’s expertise comes from years of experience in the food industry, he also credits a three-day FHO course he and his teammates took, which, to him, forms a very useful baseline of knowledge.

He recommends it for anyone who’s looking to set up their own food stall or eatery, even if they're not in the central kitchen/catering line. Yip says the course offers a good overview of hygiene, safe food handling, and the operational aspects of handling food.

Come October, FHOs like Yip will be able to take a course and get certified as Advanced FHOs. Advanced FHOs will be trained to carry out internal audits and to develop and implement FSMS which meet HACCP standards (an international standard for food safety).

One of the key things to really watch out for in food safety is something called the “cold chain”.

Soba noodles are chilled once they are cooked — this helps with food safety (preventing bacterial growth) as well as quality (by keeping them chewy, and preventing them from being overcooked) They are then portioned out and rapidly frozen.

And with that, the noodles are ready to be trucked out to restaurants in refrigerated trucks. Just like in a regular kitchen, where the chef samples the food to check that everything’s alright, food here is sampled too — in an in-house food laboratory.

Samples of every type of food prepared at the central kitchen are tested regularly, and examined for sugar and salt content, acidity, and even texture. This helps to ensure consistency and quality.

Yip explains that the lab is especially important when a new product is being launched. As the product would have gone through its own special preparation process, it needs to be tested.

New products are also retained so that their shelf lives can be determined. Shelf life is a matter of both quality and food safety.

Each of the central kitchen’s 15 food production lines is watched over by a set of CCTV cameras.

The CCTVs aren’t solely for security purposes though.

They also serve an important role in ensuring that RE&S is prepared for contingencies.

For example, in the unlikely event that a disgruntled supplier is trying to sabotage the central kitchen, a particular batch of food may need to be recalled from receiving shops or restaurants because it doesn’t meet food safety standards.

Reviewing CCTV footage can help to track down the affected batches to minimise food safety risks to consumers and also reduce wastage.

Yip tells me that while they thankfully haven’t needed to activate these contingency plans in the 12 years RE&S’s central kitchen has been operating, he and his team are “thinking of all possibilities that might happen” so they’ll be able to respond well, and quickly, if they do happen.

CCTVs can also help in less dramatic circumstances. When there is building maintenance needed, as it is from time to time, CCTVs can help with monitoring movement in the food preparation area, and ensuring that the machines handling food have stayed covered up during the maintenance work.

If any machines or food preparation areas were exposed for some reason, cleaning will be done before production can start.

CCTVs to be a requirement

Central kitchens such as RE&S’s, as well as caterers, will be required by SFA to install CCTVs at food handling areas from 2022, as these establishments prepare and distribute large volumes of food.

The CCTVs will allow food establishments to better monitor their operations, and shape good behaviour among food handlers to comply with food safety and hygiene regulations. If there is an outbreak of gastroenteritis, SFA will request for the CCTV footage from the implicated food establishment for their investigations.

For RE&S, CCTVs have been up and running since 2013 when the Tai Seng central kitchen opened.

I guess you can never be too safe when it comes to food.

Starting from next year, food establishments which consistently provide food safety assurance by maintaining high standards of food safety will be recognised with longer licence durations of up to 10 years, and awarded with higher award tiers (e.g. Gold, Silver or Bronze).

The new framework looks at the ongoing performance of food establishments to provide a better representation of their food safety and hygiene efforts.

This applies to larger establishments like central kitchens, as well as smaller ones like restaurants and bakeries. This will help consumers make informed choices about what and where to eat.