It was an ambitious blueprint to bring greater convenience to people through greater connectivity.

There were some updates on upcoming lines such as the Thomson-East Coast line, as well as the Downtown Line extension.

However, things were not so straightforward for the Cross Island Line (CRL), which caused a brouhaha when it was first announced. 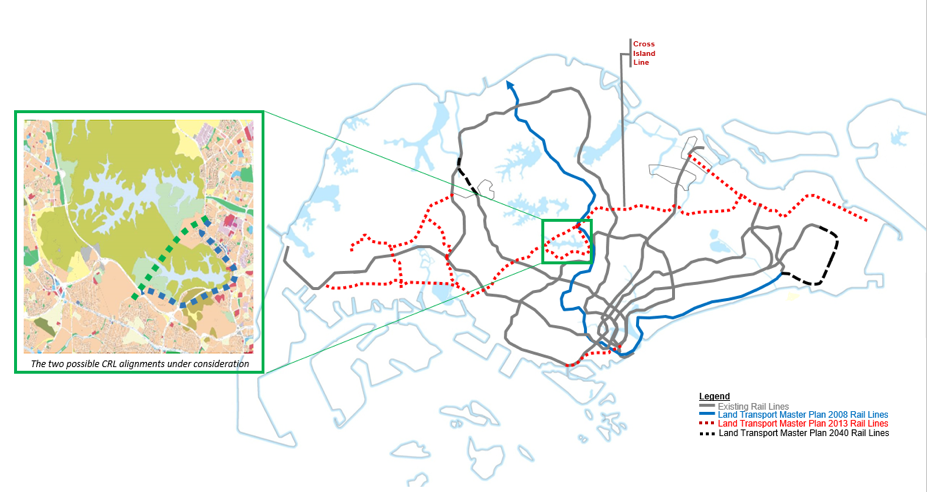 CRL will be about 50 - 60km long, and will be the longest fully underground line that spans across Singapore from Changi, Hougang, Ang Mo Kio to West Coast and Jurong.

The line will have 30 stations and is expected to carry over 1 million commuters every day in the long run.

With more people moving into areas such as Punggol, this will be a relief from an increasingly crowded North-East Line.

Furthermore, most Singaporeans will not spend more than 45 minutes travelling between home and work in the future by taking CRL. Here comes the tricky issue: How will the line span across Singapore?

Besides being the biggest in size, it is also home to many flora and fauna in Singapore as it is relatively undisturbed and intact as compared to other nature reserves here.

Yet, a straightforward way to connect the East and West for CRL is to run under the CCNR with a 4km direct alignment.

2km of the tunnel will run underneath the CCNR, while another 2km will be located outside of CCNR.

The other option is a skirting alignment which is 9km long that will circumvent CCNR but will add another six minutes to commuters.

The skirting alignment will also include extra works, which costs S$2 billion more, as well as the need to acquire land and homes.

The announcement of the two options in 2016 caused a debate among many members of the public.

On one hand, nature enthusiasts shared environmental concerns with the direct alignment, running under the nature reserve.

On the other hand, home-owners and retail owners in the vicinity were worried about land acquisition and disamenities with the skirting option.

With many stakeholders involved, it wasn’t easy to make a decision.

That explains the rigorous consultations that the relevant authorities had with several stakeholders, such as the nature groups, and advisors and grassroots leaders, since 2013.

Nature groups and other government agencies such as PUB and NParks were engaged from the onset and gave inputs to help scope the studies as well as LTA’s plans for minimizing impacts.

The EIA is carried out in two phases to assess the ecological, geological and hydrological impacts should the CRL be constructed under the CCNR.

The EIA investigates to what extent the construction and operation of CRL will affect the animals and plants as well as the habitats that they reside in CCNR.

Following the first phase, a second phase was carried out to evaluate the possible environmental impacts arising from the construction and operational phases of the CRL.

Some mitigation measures include having all worksites to be situated a distance from the CCNR, and to have no surface work carried out within the reserve.

LTA also assured that during the construction phase, tunneling will be at depths of 70m below average ground level and within hard granite rock under the CCNR for the direct alignment.

For the skirting option, it will be 45m below ground as well. This depth was chosen due to surface and underground infrastructure, as well as the fact that commuters would be travelling on the Circle Line, and the stretch of Thomson-East Coast Line which will start operations next year along that route. 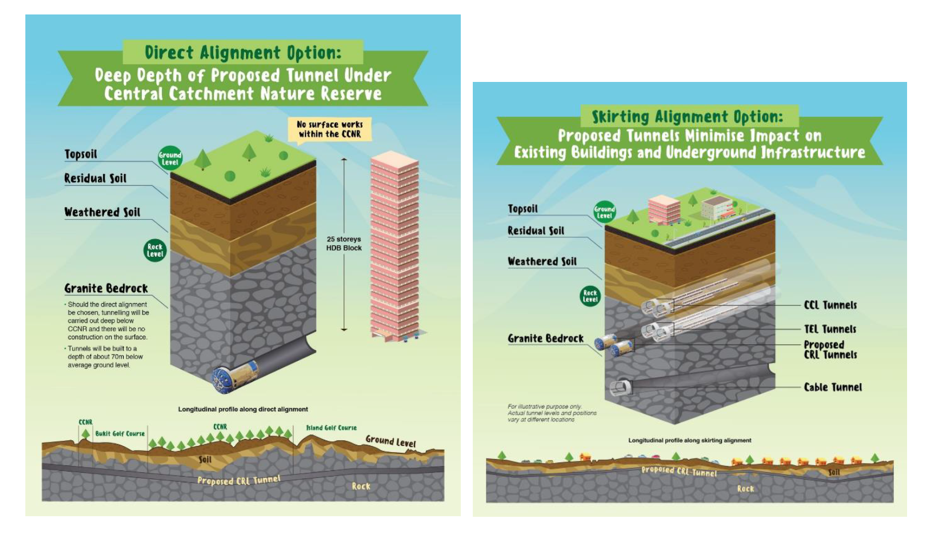 Having said that, no decision on which alignment to pursue has yet been made by the authorities.

Along with the announcement of phase two findings, the Senior Minister of State for Transport and Health, Lam Pin Min shared that the conversations with stakeholders since 2013 have been an “enriching” one.

“We embarked on this journey to consult representatives from nature and heritage groups, grassroots leaders and residents. Although it took us 6 years, our experience has been an enriching one. This whole process of listening to different views and coming together to understand their different perspectives has given a new meaning to consultation.”

President of Nature Society, Shawn Lum also agreed that the conversation has been meaningful:

“The conversation between the LTA and nature groups has been a careful, considered, and cordial one. Over several “deep dive” sessions, we looked through potential impacts and proposed mitigation measures for construction along either of the two proposed CRL alignments…I am happy that the LTA is committed to implement the proposed mitigation measures proposed. We have had our questions and concerns heard, and look forward to the continuing conversation.”

Meanwhile, no decision on the alignment option for the CRL in the vicinity of the CCNR has been made after the “detailed and rigorous study”.

LTA is still evaluating and considering the options.

The agency also assured that they are committed to undertake all necessary mitigation measures to minimise the environmental impacts for either option.