Senior Ministers of State Janil Puthucheary and Tan Kiat How have warned against a doctored photo of the pair used to advertise a food and beverage product.

According to Janil and Tan — both posting separately on their Facebook pages — the photoshopped image had used a photo of the pair at the signing of a memorandum of understanding (MOU) from May this year.

"This photo and claims are fake."

TODAY reported that the photo had appeared in a YouTube advertisement and had altered the original photo so that Janil and Tan were standing with boxes of "sugar friends tea" instead of the signed MOUs.

The advertisement claimed that the product was endorsed by MOH and would lower one's blood sugar levels.

A website that can be accessed through searches for "sugar friends tea" makes dubious claims about the product's ability to "cure diabetes".

"Government officials do not endorse products"

"As a practice, government officials do not endorse products. Stay alert and do not fall prey to such fake advertising," wrote Janil, who also told TODAY that the Infocomm Media Development Authority was looking into the matter.

Malaysia's doctor-general, Noor Hisham Abdullah, had previously denounced the use of his likeness in a similarly photoshopped image to advertise the same product. 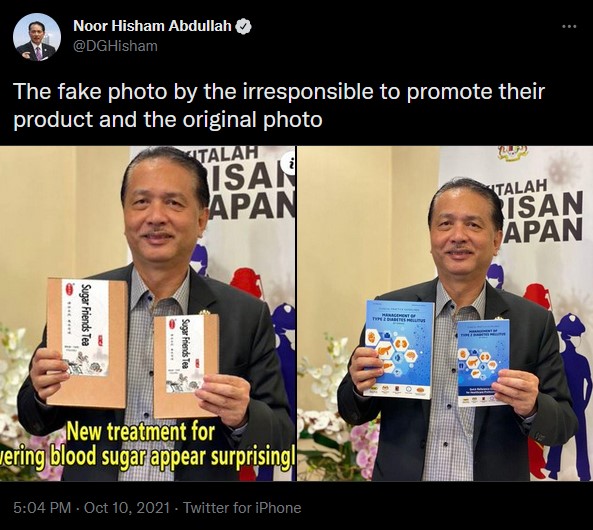 In April, Minister for Health Ong Ye Kung called out several images that had been doctored to appear as the minister's endorsement of health products.