A grab driver was spotted with multiple signages in his car to alert riders to his breathing allergies and sensitivities.

His signages also point out the risks of smoking and its effect on others.

A TikTok user, who was a passenger in his car, documented her experience in a 15-second video which has gotten over 13,800 views so far.

In the video, the driver can be seen wearing a respirator while driving. At the back of the two front seats, there are at least three signs.

One of the signs explained that he is "very allergic and sensitive to" second-hand smoke, moth balls odours, medicated oils and strong perfume or cologne.

He also wrote on the sign: 'I can't breathe!"

Additionally, he added that the windows will be opened for better circulation and apologised for the inconvenience caused to his passengers. Another sign pointed out the "risks to other people" when they are exposed to second-hand smoke, which includes the increased risk of developing smoking-related diseases.

They will also be inhaling the "same poisonous gases and thousands of toxic chemicals found in tobacco smoke", the same sign read. The sign also highlighted the short-term effects of breathing in second-hand smoke, including:

Another sign wrote: "Do you love your loved one (sic), family and friends?"

The question was followed by illustrations of what pollutants a cigarette contains. 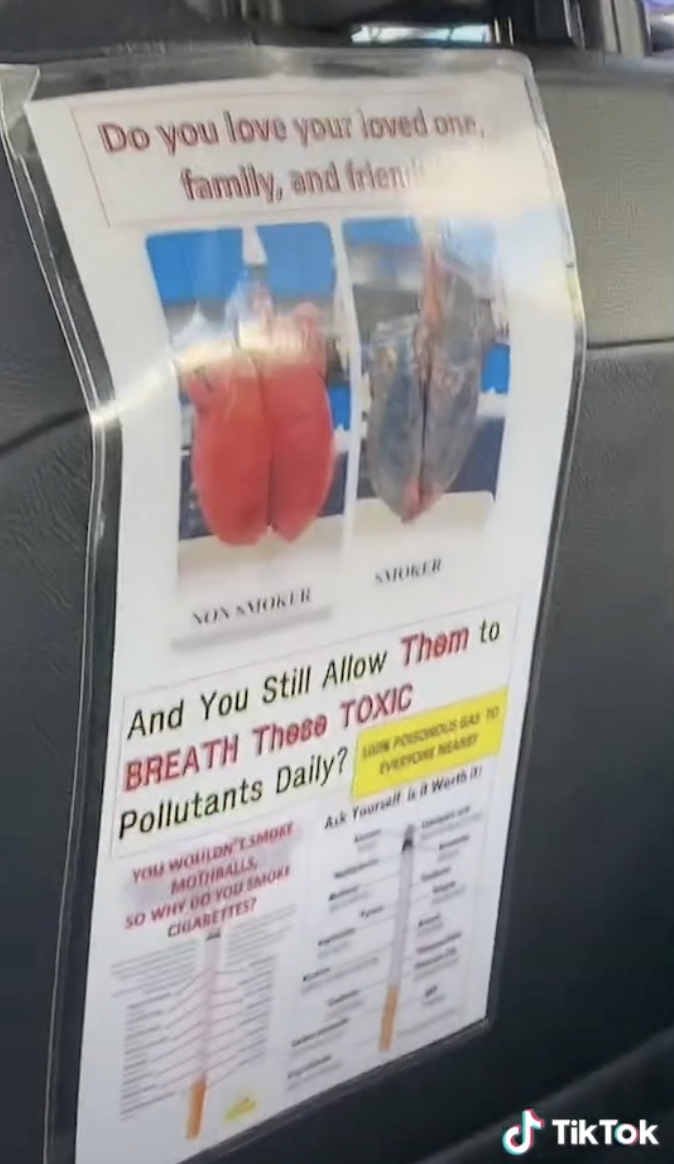 The sign read in large letters, with certain key words in red: "And you still allow them to breath these toxic pollutants daily?"

The TikTok user wrote in the caption: "Thank you uncle #iQuit."

She added in the comments section that the uncle was very nice despite the alarming number of signs he put up in his car.

One commenter said that she had taken his car before and felt bad because she was wearing strong perfume. The driver ended up having to open all the windows throughout the whole journey.

From the signs, it is quite clear that the driver is advocating against smoking and its harmful effects.

A commenter wrote: "Coming from an ex-smoker... totally agree with uncle!"

If you're trying to quit smoking, you can find some tips here.