Do you love fried chicken wing, drumstick, and thigh?

Always thought chicken breast meat is too dry and the rib portion too gamey?

Well, you're in luck.

As a result of the recent chicken supply constraints, Arnold's Fried Chicken in Singapore announced that it is short of breast and rib parts -- but it is not exactly to the chagrin of everyone.

That is because they still have ample supply of wing, drum, and thigh parts, which are traditionally considered the juicier chicken parts and the more coveted bits that customers request for.

The announcement of the chicken shortage was put up by Arnold's on June 7, 2022 in two back-to-back posts -- but they sound more like good news to consumers.

The second post four hours later reassured customers that other items, such as the spring chicken meal, will still be available and have apparently avoided the supply snag.

In the comments section of the two posts, people did not appear too distraught about the loss of chicken breast and rib parts.

On the contrary, the responses were unanimously cheering the lack of chicken breast.

The comments ran along the lines of "Chicken wing anytime, please" to "I have always preferred wing and drumstick, no breast, thank you". 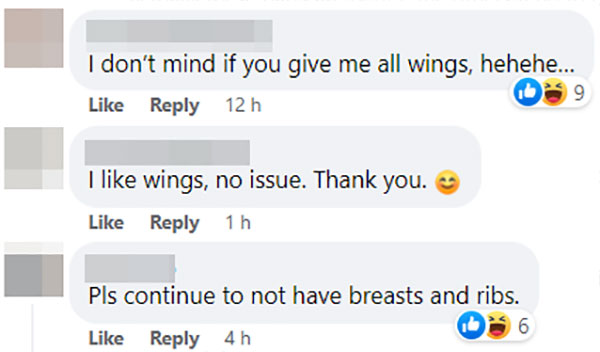 All photos via Arnold's Fried Chicken