“Anyone who says success is easy should try the Rube Goldberg, it would change that opinion.”

After all, the 29-year-old was part of the winning team of engineering students from PSB Academy that broke the national record for the largest Rube Goldberg machine on Sept 4, 2021.

Before we tackle the topic of success, perhaps it’s best to answer an important question — what exactly is a Rube Goldberg machine?

According to the Singapore Book of Records (SBOR), A Rube Goldberg machine is “an overly complex contraption, designed with humour and a narrative to accomplish a simple task”.

The next logical question that comes to mind would have to be, why?

Well, besides being a great way of turning one into a puddle of frustration, its sole purpose is usually for entertainment — for the viewer, that is.

One great pop culture reference as to how a Rube Goldberg machine works would be this music video by American rock band, OK Go.

Another would be this piece of work by America’s Got Talent contestant, Steve Price, that happens to be one of the team’s favourites.

From the multitude of other examples we’ve seen, it is definitely satisfying to see how one step leads to the next with pinpoint accuracy until you achieve the final goal.

In the case of the 13 engineering students from PSB School of Engineering and Technology, supported by Coventry University, their goal was to type a single letter on a keyboard, which they did using a grand total of 102 stages.

Their effort broke the 74-stage record previously held by Singapore University of Technology and Design in 2014.

When we asked Salman for the reason why he was even motivated to attempt the record-breaking feat, the reply was simple.

Salman, who was the team leader for the project, shared that opportunity came a-knocking after PSB Academy pitched the idea to them.

Salman was also excited by the hands-on experience which was a break from the usual books and lab work.

It allowed them to utilise their knowledge in physics and maths — “why not build a machine then?” thought Salman.

While creativity in engineering is an oft-overlooked trait, the group really had to think out of the box for this one.

There were constraints imposed on them by SBOR, such as not being able to use more than 10 items of the same object for the machine.

To speed things up, Salman shared that the group split themselves into four teams to create 25 steps each, and each team leader had to regularly check in with each other to make sure everything was running smoothly while still keeping to the regulations for the event. 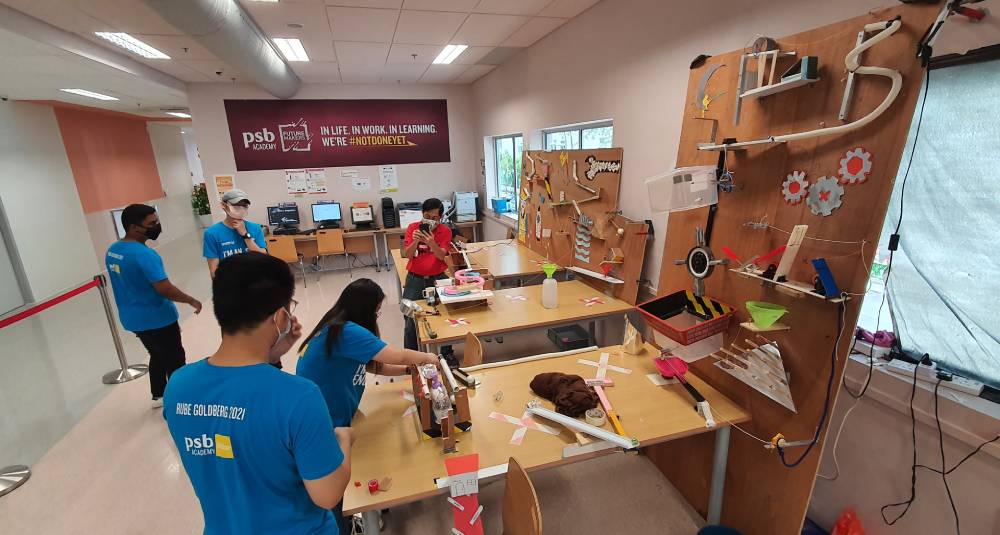 One huge challenge that the group had to overcome was the level of precision that is required of any Rube Goldberg machine.

At each of the 102 stations, there were at least three to four moving parts and a malfunction in any of these over 400 parts would derail the entire project.

Each station also operated on different mechanics — such as utilising pulley systems, weights, or water — which required various solutions and constant fine-tuning.

The entire process took countless trials and errors and about two weeks to perfect, including the toughest step, which involved a weight taped to a piece of tissue paper.

“A stream of water would fall on a tissue paper so it would tear apart in order to continue the chain reaction. But it took a while to figure out the weight that should be used as well as the amount of tissue paper.“

Salman shared that it was hard to pick a favourite among the 102 stages.

“To be honest, all the steps were my favourite, and it was incredible to watch all the parts working together in sync.”

But with the amount of effort required for the project, which occurred during the regular semester, sacrifices definitely had to be made.

“Time was what we had to sacrifice the most. We would literally spend the whole day at campus, juggling the project along with our lectures and lab sessions."

“Even Saturdays were spent in the lab building different parts for the machine. I would say it consumed a large portion of our leisure hours, and sometimes we would even cancel our plans with friends so that we could work on this,” said Salman. 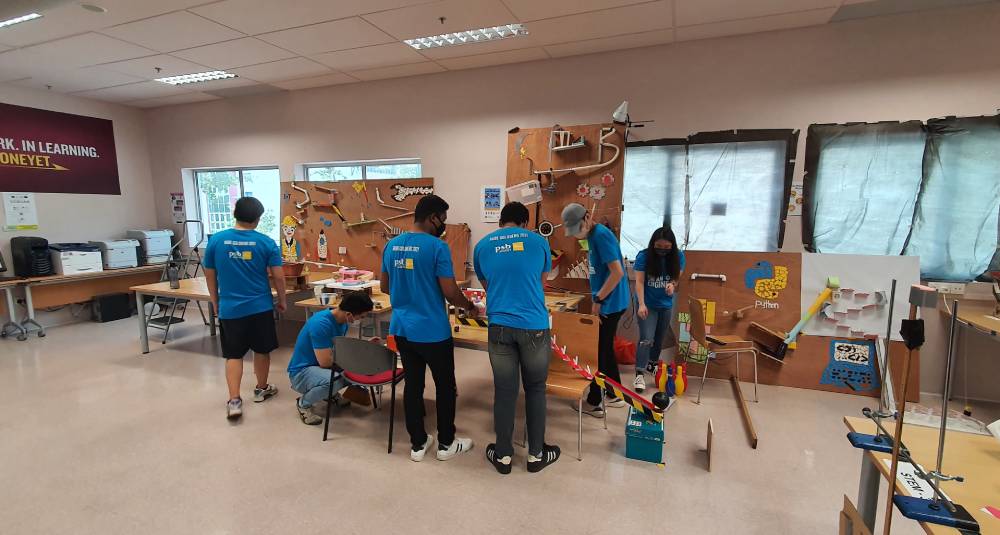 Understandably, the group was on the edge of their seats on the final day, where they were allowed by the SBOR one hour to fix any issue that arises before restarting.

“Having to restart from the beginning made us feel really anxious. And sometimes if one one step is fixed, another problem would pop up in another step. Thankfully, we didn’t have to do many restarts on the final day,” said Salman.

The definition of sweet success is when the end goal is finally achieved after repeated failures.

“Watching the whole project working in sync was like a dream come true. We didn’t feel frustration when a step failed but more of disappointment. But it was a learning point for us, where we know we have to fix things to make it work and that there will be failure before success comes.”

And Salman and his teammates are grateful for the experience.

“I knew that PSB Academy does events like talks, seminars, webinars and industry visits but I’d never have thought we would ever complete such a milestone event. I can only thank PSB Academy and Coventry University for this opportunity. It feels really incredible to break the record,” said Salman.

The hands-on learning experience was something regular classroom learning would not have been able to replicate.

“This project fulfilled both my expectations of being an engineer as I learned how things work when you actually start building things from scratch, as well as to apply maths and physics into the real world. I also got the opportunity to bond and guide other engineering students who were as passionate as me about this project,” Salman reflected.

Probably the sole regret for Salman would be that the entire machine was not as aesthetically-pleasing as they would have liked, due to the time constraints.

“We were hoping for a more aesthetic look or for a more dramatic or cool way to end the project, but our primary focus was just for the whole project to work,” shared Salman.

The memorable learning experience has made the second-year engineering student eager to up the ante and attempt an even more challenging project in the future.

Said Salman: “This is one of the biggest achievements in my life and has obviously lifted my spirits to aim for higher goals. After this project, I can say that the sky's the limit.”

He added that the team also looks forward to even greater projects in the future and hopes to inspire their fellow engineering students to expand their learning beyond the classroom.

And what about Salman’s biggest takeaways from the entire experience?

“The two most important things would be learning to bounce back from failure and teamwork. We failed so many times before we got it right.

“This tells us that there will always be failures before you attain success and that you have to keep trying and working hard until you succeed. We didn’t give up at any point and that’s why we could achieve it.”

This article is sponsored by PSB Academy.