In a now-deleted tweet, a Twitter user going by the handle @jssylm (Jess) made an appeal to people in Singapore to seek help regarding a supposed incident of family violence involving her sister.

Jess alleged that "her parents are abusive" and "the police are not helping" in the tweet which went viral before it was deleted.

Here's a screenshot of the original tweet which was later reposted on other social media platforms: 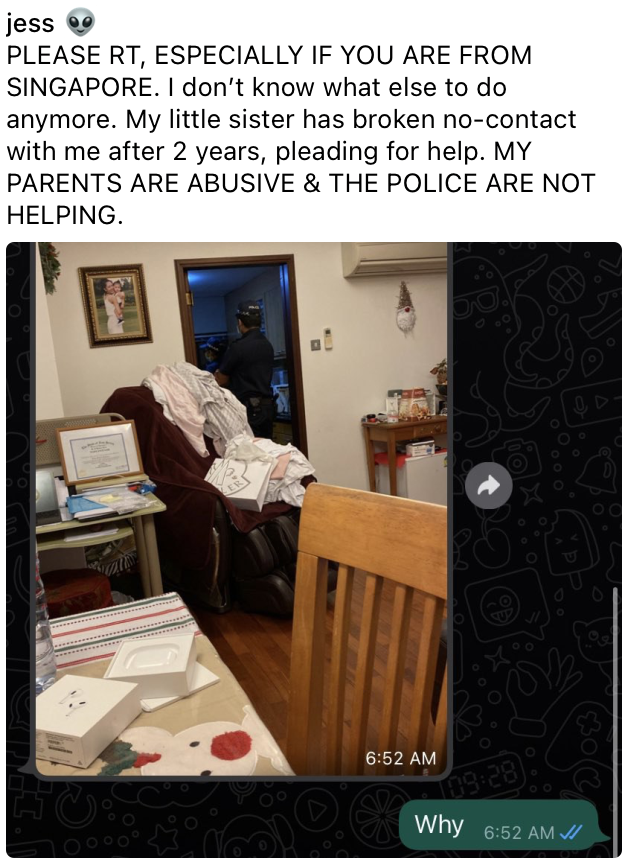 While Jess deleted the above mentioned tweet, she posted an update on Jan. 10.

She claimed that the police have "finally" given her a "proper solution" due to the "external" pressure.

However, she said she cannot reveal the details "due to [her] safety". In a Facebook post on Jan. 14, the police shared more about details about this case to clarify on what has been done after they were alerted to the incident.

According to the police, they received a call for assistance from a residential unit along Hullet Road, near Orchard, at 6:45pm on Dec. 27 last year.

When officers arrived, it was established that there had been a dispute and tussle between a mother and daughter over the use of a washing machine.

The tussle purportedly resulted in some superficial scratches on the arms of both mother and daughter, the police added.

The officers interviewed the two of them separately and offered to call in an ambulance but they declined any medical assistance. The officers then advised them not to resort to violence against each other and contact the police if the situation escalated.

The officers also spoke to the father when he returned home who said he will manage the family issue.

Based on the police's record, this is the first time the family had called the police for help.

The police said that they maintained contact with the family after the incident on Dec. 27, 2021.

They spoke to the daughter twice on the phone after the incident, on Dec. 30 and Jan. 9, and met her in person on Jan. 9, 2022, to check on her well being. Separately, the police also checked in with the mother twice.

Both parties did not raise further concerns and said that there were no other disputes since the one that happened on Dec. 27, 2021.

When the police suggested to refer them to a Family Service Centre (FSC) for counselling and mediation, the mother and daughter accepted this suggestion too.

A social worker from the FSC then reached out to the daughter. In addition, the police also provided an officer's contact so that the daughter can contact him/her directly if required.

The Ministry of Social and Family development (MSF) checked in with the daughter on Jan. 5 as well.

The ministry assessed that the daughter was not in imminent danger and will work with the FSC to provide necessary support to her and the family, the police said.

If you or someone you know is experiencing family violence, you can call the National Anti-Violence Helpline on 1800 777 0000.

For urgent cases that require immediate assistance, please call the police on 999 or SMS 71999.