A female resident in Sengkang has been using the lift landing area and corridor outside her HDB flat to store her things the last three years, causing a massive clutter that has vexed her neighbours.

Shin Min Daily News reported that hundred of items including carton boxes, papers, mattresses, refrigerators, cabinets, chairs, and suitcases were stored in the public areas by the resident, causing concern among neighbours about a potential fire hazard. At least one resident of Block 228B Compassvale Walk in Sengkang contacted Shin Min and said the matter has been reported to the authorities, but has persisted.

Unit next to lift

It was observed by the reporter at the scene that half the corridor space was taken up and at least five suitcases were left at the staircase, while the unit of the resident responsible for the items was also filled with items.

The woman's unit is next to the lift, and her belongings have resulted in only a 1m wide space along the corridor left for walking. 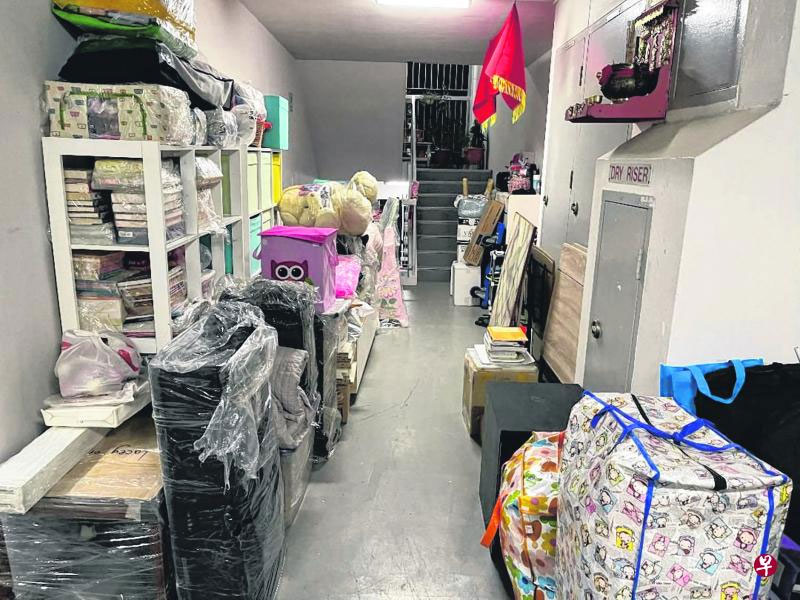 A neighbour told Shin Min the female resident collects pre-owned items and treats her living space and the corridor as a warehouse.

He also claimed people do come to the woman's unit to buy things from her.

The neighbour also said the corridor is passable, except that the items will pose a hindrance to the young and elderly, and especially during an emergency and can cause a fire hazard.

According to Shin Min, the woman who owns the items has received notification from the town council to clear out her items.

But when queried if she would remove them, the woman said it was a private matter and refused to disclose what she would do next.

Items cleared but pile up again

Another 60-year-old neighbour said the woman lived with her parents and started hoarding items three years ago.

In response, the neighbour reported the matter to the town council on previous occasions.

The town council would investigate and put up notices to ask the resident to remove her items.

But after the items get cleared, they will start to pile up again after three days, according to the neighbour.

The neighbour even claimed she is moving out of her own unit in a month's time to avoid getting into a dispute with the resident.

She said: "During this pandemic, everyone should stay home as long as possible, but she collects debris everywhere."

This was after the neighbour got scratched by the debris and have reminded the young ones at home to be careful while walking along the corridor.