A father and son duo, who are undergoing a Covid-19 quarantine order, shared their journey on Tiktok recently.

The father, Dovanson Quah, put up a series of nine videos — titled "When your three year old kena Covid" — which has garnered more than 300,000 views so far.

Speaking to Mothership, Quah said that he received a message about a positive case in his son's preschool on Saturday (Nov. 20).

The next day, his son, Aziel Quah, came down with a fever and was feeling unwell. So, his wife decided to take an Antigen Rapid Test (ART) at home which came back positive.

"The first thing that came into our mind was whether the rest of us were also infected. Aziel was just kissing his four month old brother that morning, and we shared food."

He immediately took his son to a clinic to take a Polymerase Chain Reaction (PCR) swab test and began their isolation when they returned home. Quah posted the first TikTok video on their isolation journey on Nov. 22.

On day 0, which was on Nov. 21, the family designated the master bedroom as an isolation zone for Aziel (as well as Quah who had to accompany him) as it has an attached bathroom.

While the father and son were at the clinic, Quah's wife and helper cleaned down his son's room and stocked the master bedroom with some essential items.

After returning home from the clinic, the father and son began their isolation.

At the door of the master bedroom, his son said: "Bye, I want to hug mummy."

To which Quah responded, "No hugging," as he was afraid that the virus would spread.

The son and mother exchanged an "I love you" before the door was shut.

The duo firstly showed the viewers how they organised their clothes.

The three year old was seen putting his dirty clothes in a trash bag after he bathed and changed into his pyjamas. This was to avoid mixing his clean and dirty clothes. 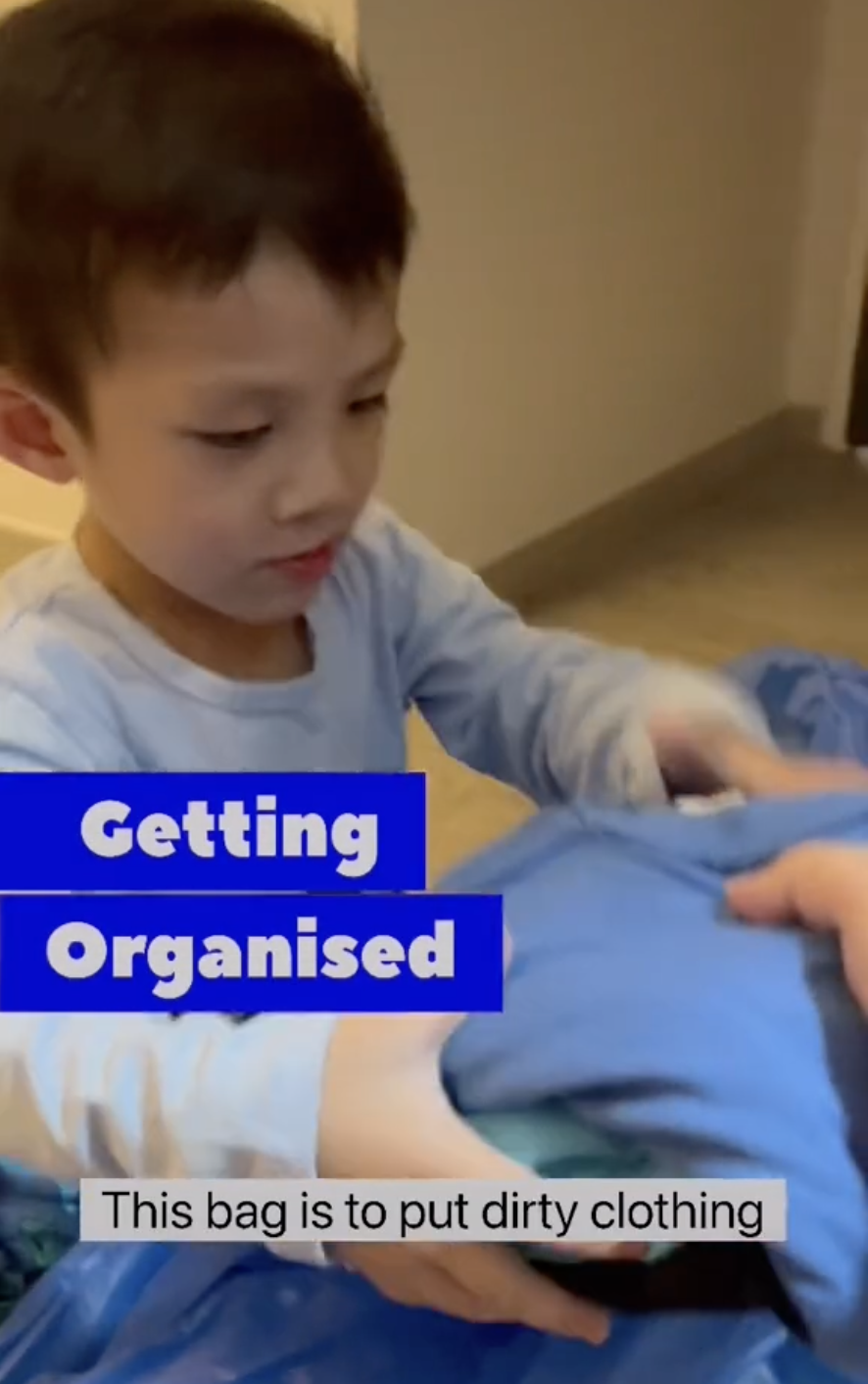 Then, Quah explained to his son the items they needed for their isolation which included an ART home kit, N95 face mask, hand sanitiser, wet tissue and also his son's Pokémon stickers.

His son also had a chance to show viewers other items they had like a water bottle, his two spider-man books and educational books on dinosaurs, the human body and plants.

He even showed off his outfits saying:

The boy went on to talk about the clothes that he'd wear at home and when he goes out. But Quah quickly reminded him with a laugh: "You're not going out."

He later also showed his collection of plush toys on the master bed, naming every one of them.

They even showed the table where they would have their meals.

Nearing the end of the video, Quah was seen wearing a mask as he read his son a bedtime story. 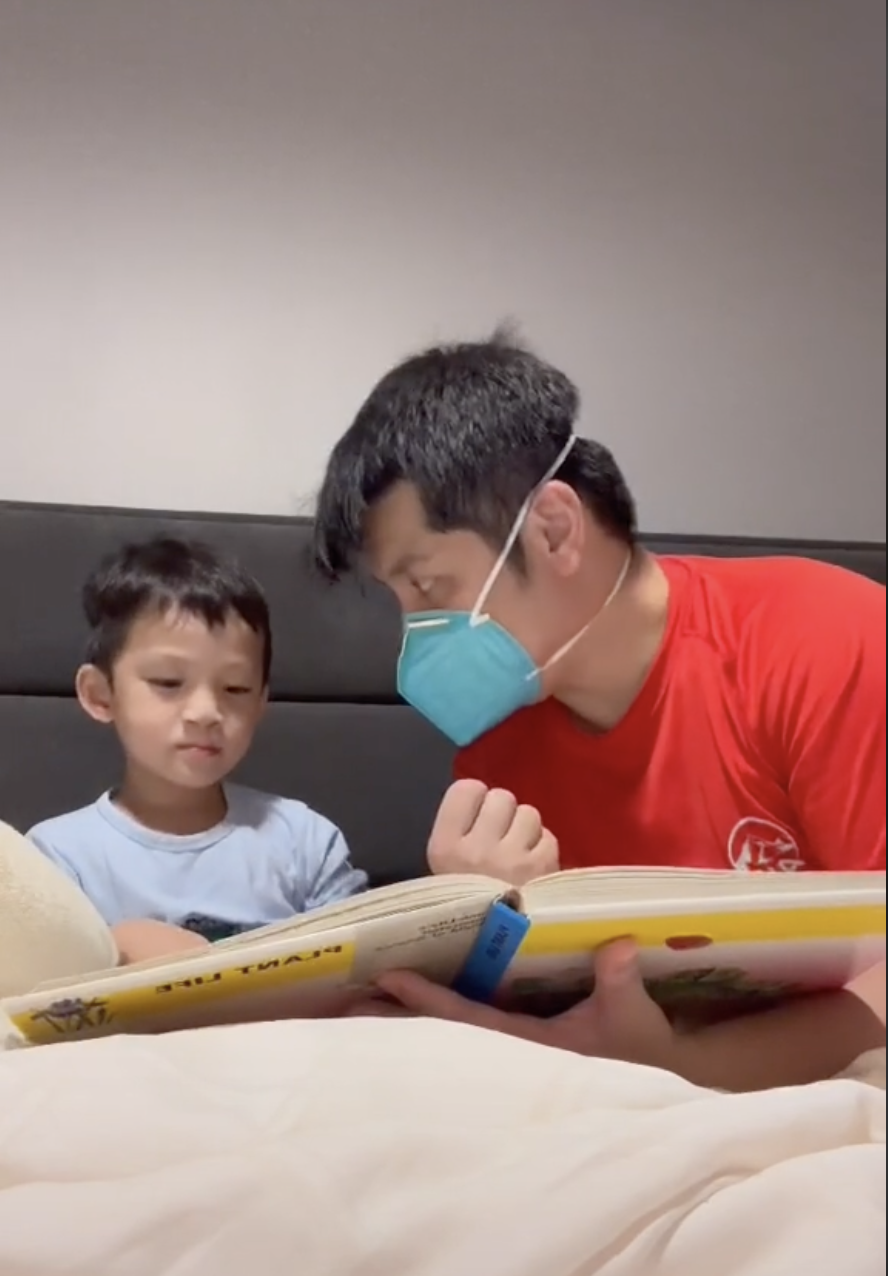 Quah explained that he wore a mask for the first two days of their isolation in hopes of not getting infected.

"Do you think I have Covid-19?" Quah joked. But the innocent three year old responded yes without any hesitation.

Soon later, his son fell asleep and Quah wrote: "Finally asleep. I can do my work."

Quah also shared other videos of him and his son over the past two days on his TikTok account.

How are they now?

The duo were transferred to a hotel yesterday (Nov. 23) to serve the remainder of their isolation.

"We requested to MOH (The Ministry of Health) to be isolated off-site so that we are not in close proximity to Jorssen (Quah's four month old baby)," Quah told Mothership.

As a precaution, Quah decided to take an ART this morning before leaving for the hotel. Unfortunately, the result came back positive.

Quah said that contracting the virus was inevitable — even though he was wearing a mask throughout — because he was cleaning up after his son the whole time.

Now, Quah is unsure when their quarantine order will end as he and his son tested positive for Covid-19 on different dates, which means that their isolation periods would be different.

"I don’t know how long the isolation will be. There are different answers when different departments of MOH call me."

For now, the duo are doing fine.

"He had flu symptoms and fever for the first two days. Now the fever has subsided, and he just has the flu."

Aside from having the flu, Quah said that Aziel is happy because he doesn't need to go to school.

Quah is keeping his son occupied with his favourite toys, reading him his favourite encyclopaedia on plants, watching YouTube videos, and playing games on the iPad during their stay.

The Ministry of Health (MOH) announced on Oct. 9 that PCR testing will be reserved mainly for individuals who feel unwell and have symptoms.

The ART will be used predominantly for people who are well, for community testing, as well as for managing close contacts of Covid-19 cases, so infections can be detected early.

The Home Recovery Programme (HRP) is a default protocol for fully-vaccinated individuals who test positive for Covid-19 from Sep. 15.

From Oct. 10, the protocol was extended to children aged five to three, as long as their home environment is suitable for home recovery.