The Singapore health minister's visit comes three months after the two cities cancelled an ill-fated plan for a travel bubble that had already been suspended once before.

Photos of the interaction between officials were put up on Facebook by Ong.

Ong's visit was to attend the Asia Summit on Global Health with more than 70 speakers who were there in-person or virtually.

He said on Nov. 24 that Singapore still had hopes of starting the travel bubble with Hong Kong again.

“We hope that at some point, as we bring our infection down further, our bubble between Hong Kong and Singapore can be realised again,” Ong said, as reported by SCMP.

He was on stage alongside Sophia Chan Siu-chee, Hong Kong’s Secretary for Food and Health, with three other panellists who joined in virtually.

The session was on building resilient, equitable and effective long-term public health policy. 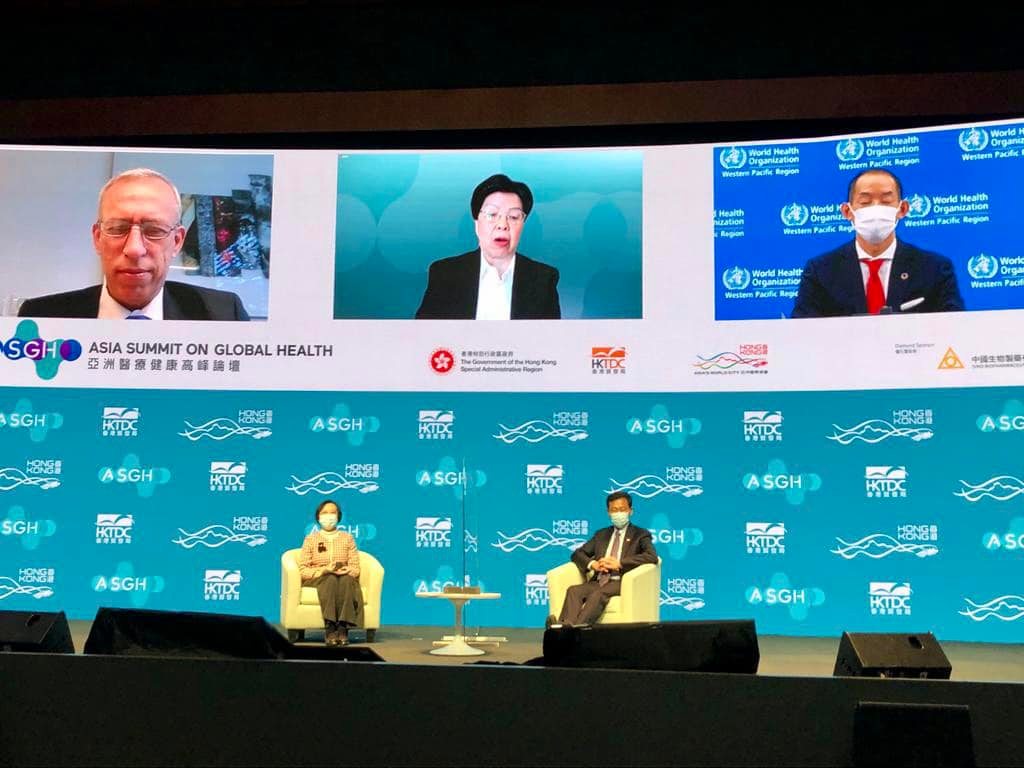 As reported by SCMP, Ong explained that Singapore is opening up to countries where the "infection level is about the same" so "they become possible partners".

In Singapore, 85 per cent of the 5.45 million population are fully vaccinated, compared to 60 per cent of Hong Kong’s 7.39 million.

Singapore has been registering 1,500 to 2,000 Covid-19 cases daily, while Hong Kong is one of the strictest countries in dealing with Covid-19 as they are pursuing a zero-Covid policy.

Ong also spoke about Singapore’s experience of switching from a zero-Covid policy to incrementally reopening its borders.

By pivoting away from a no-Covid approach, Singapore now has quarantine-free travel arrangements for fully vaccinated visitors from more than two dozen places worldwide, including Germany, Switzerland, South Korea, and Thailand soon.

When Singapore was focused on stamping out Covid-19, it was hard to introduce quarantine-free travel arrangements with other places, Ong said

Singapore is still planning on coordinating a travel bubble with Hong Kong even though two previous attempts fell through at the last minute.

An initial attempt to launch a Hong Kong-Singapore bubble in November 2020, before mass vaccinations, failed following a rise in cases in the Hong Kong, with a second attempt in May dashed by rising infections in Singapore.

What else did Ong say?

Speaking to Bloomberg in an interview on the same day as the forum, Ong said Singapore’s immunised population is half as likely to die of Covid than influenza, while those who are not vaccinated are five times more likely to succumb to the infection.

He used these examples to explain that Singapore can be protected from a Covid-19 resurgence even if another wave hits as expected -- as long as the country has one of the highest vaccination rates in the world, with a growing natural immunity among the population.

That shows that the virus can be endemic, provided enough people are immunised, he said.

“Can we keep ICU cases and deaths as low as possible, to the extent that it’s no different from an influenza wave?” he asked.

“I think it’s possible,” he said. “Even when it’s a wave you can withstand it. There are casualties but you are able to work through it with society still functioning very normally.”

The relaxation of mitigation measures now means the virus will continue to spread, but vaccinations, boosters and other steps like mask-wearing and social distancing will keep the number and severity of infections down, Ong added.

He also told Bloomberg that the next two weeks will be critical for Singapore.

Officials won’t decide whether to ease pandemic restrictions further, or to hit pause on the reopening, until it’s clear where the outbreak is headed.

But the government will monitor closely over the next fortnight, observing how boostering has been happening at a "fairly decent pace", seeing more people recovering safely, and developing natural immunity, all of which are applying the brakes on the rise of infections.

Work from home to be possibly eased

One of the next relaxation moves will be to ease work from home requirements, Ong said, but not timeline for when or how that may occur was given.

Ong said he expects the virus to return and hit Singapore again, but hoped that the city will be able to withstand the onslaught.

While easing restrictions has triggered rising case rates, severe disease and deaths have remained a fraction of what occurred in other countries, he said.

He told Bloomberg: “The direction is clear, we want to progressively open up more and move toward a stage where it becomes an endemic disease.”