It's not unheard of to have one's Physical Employment Standards (PES) changed in the course of one's service to the nation — something many men in Singapore can attest to.

One of the reasons for this is the discovery of a certain ailment or condition at some point during or after full-time national service, which can result in one's PES status being lowered, to accommodate the serviceman's physical condition.

This process is known colloquially as "down-PES", and often results in the serviceman being reassigned to a different, less physically demanding role.

One can also have their PES status raised, however, or "up-PES"-ed, as was the case for one full-time national serviceman (NSF), who scored himself a feature in MINDEF's PIONEER magazine.

From PES E to PES B

Zachary Koh was upgraded from PES E to PES B after a review.

His original PES E status was due to suspected muscle dystrophy, which was discovered when he suffered from an episode of severe cramps after Taekwondo competitions and training in Secondary Three.

The review involved "numerous check-ups" at the National Neuroscience Institute, including an electromyography test which measures muscle response to nerve stimulation, and a biopsy procedure, as well as long consultations with SAF Medical Officers.

He explained that he "always wanted to get that (combat) experience" which older family members had shared from their own experiences in NS.

From Security Trooper to Specialist

Koh's NS journey started with nine months of work in the pass office of Sembawang Air Base, or behind a desk, as a Security Trooper.

Receiving his PES B status meant that Koh would have to go for a second round of Basic Military Training (BMT).

Koh prepared himself for the transition to being combat-fit by running around the airbase after his shifts.

He eventually earned a spot in Specialist Cadet School (SCS), and went on to graduate top of his cohort, receiving the Golden Bayonet. 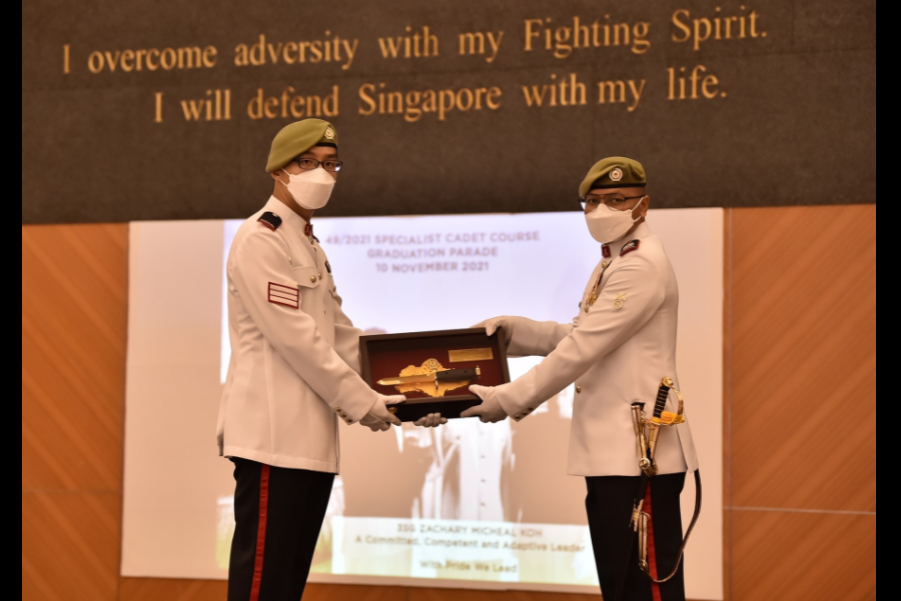