A motorcycle and a car were involved in a road accident along Tampines Expressway (TPE) on Thursday (Nov. 18) afternoon.

Pictures of the incident were posted on Facebook by a woman who claimed to be the motorcyclist's cousin.

Based on the pictures, the motorcyclist appears to have suffered injuries on his arms and leg.

Paramedics can also be seen attending to the injured motorcyclist.

The incident allegedly involved a grey BMW car which had "abruptly" entered the same lane as the motorcycle, causing the motorcyclist to jam brake and skid. 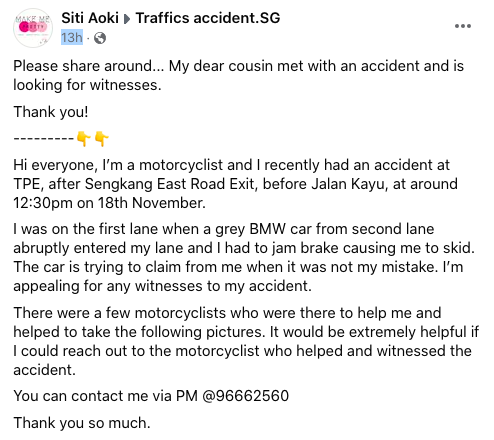 In response to queries from Mothership, the police said that they were alerted to an accident involving a motorcycle and a car along TPE towards Seletar Expressway (SLE) at 12:33pm on Nov. 18.

The 21-year-old male motorcyclist was conscious when conveyed to the hospital.