In Singapore, you might find some creative takes on your typical roti prata, like Springleaf Prata Place's Praclette or their Däs Prätwürst.

But this Malaysian man takes roti prata (or roti canai as Malaysians call it) to the next level by including some artistic touch in his food.

One of his "prata art" creations that caught the attention of many was his prata shaped like a monitor lizard.

The video has garnered more than 52,000 likes at the time of writing.

He was responding to a comment of another user who requested a prata shaped like a monitor lizard.

He took up the challenge and created the prata, adding two soft-boiled eggs by the side before dousing it in curry and sambal.

Another of his creations that he shared on his TikTok account is a prata in the shape of a snake.

For couples, @abangterbang also created a heart-shaped prata with soft boiled eggs in the middle, sprinkled with spring onion and fried shallots.

He also created a prata shaped like a tanjak, a traditional Malay headgear worn by men.

Other than his artistic creations, @abangterbang also features innovative takes on prata flavours and fillings.

Some of his interesting prata flavours include a wrapped prata (similar to a burrito), corndog prata, as well as pizza prata, to name a few.

Netizens in awe of his creations

Netizens were in awe of his creativity in tweaking the simple and plain prata into interesting shapes and flavours.

One user thought the stall serves one of the best prata around. "No one does (this service) like this for their customers. Their new menu is next level."

Another Tiktok user found himself jealous of those staying near the stall.

"Why is it that my area has no creative prata place as this?  They only sell 'kosong' prata or egg prata."

One user was curious about who eats his "weird" creations. 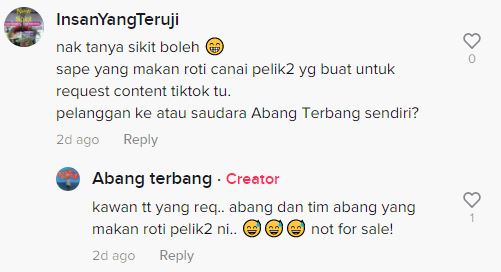 In response, @abangterbang said that he and his colleagues are the ones eating it, and they are not for sale.