"Is my neighbour trying to curse us?"

Jun Hoshino, an Ang Mo Kio resident, took to Facebook to write about a startling discovery outside her family's HDB flat: Paper figures of a man and woman with a miniature coffin. Two fruits with a nail driven through them.

The items were found along the corridor, just under the family's living room window.

According to Hoshino's post, her neighbours would ring a bell and chant over the objects in the morning and evening. 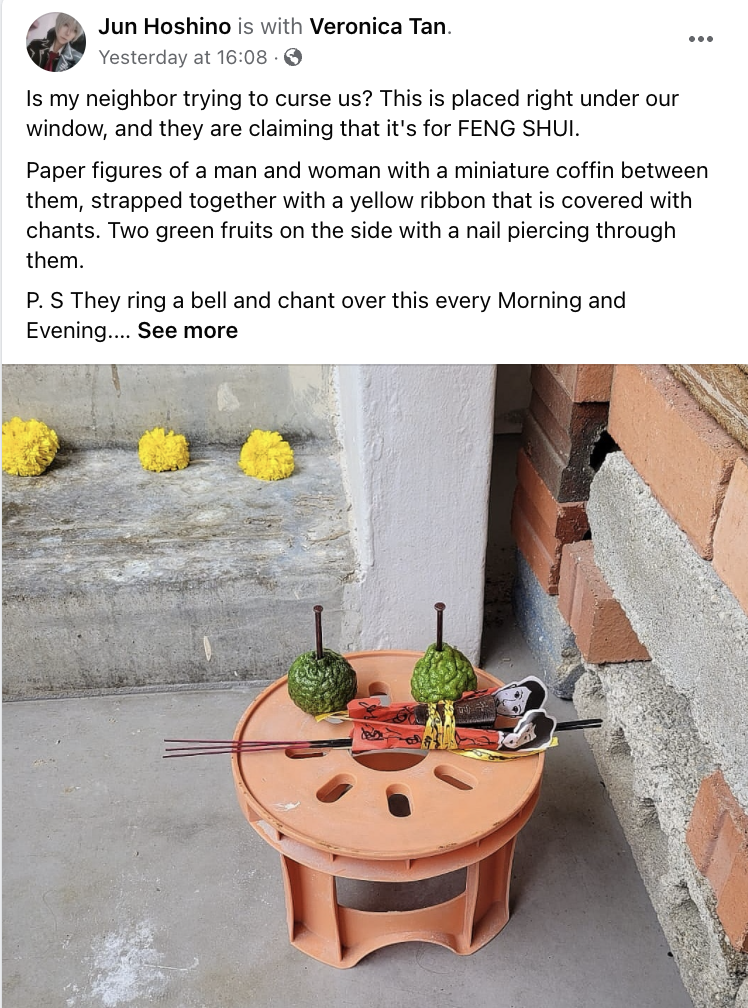 "They are claiming that it's for FENG SHUI," the post added.

But the family isn't so convinced.

Speaking to Mothership, Veronica Tan, who recently moved out from the unit, said that her family has lived there for eight years.

During this time, the family has been embroiled in an ongoing conflict with their next-door neighbour, a couple in their sixties.

The issue began because of the space beneath their family's window, which was being used by her neighbours to place their shoe rack.

While her family "didn't really care as (they didn't) really need the place", she claimed that things changed after the neighbours started burning incense on top of the rack, resulting in smoke getting into their home.

They lodged a complaint with the town council, which made their neighbours "very pissed," Tan said.

"They have always verbally cursed my parents," Tan said, adding that they have made some unkind remarks about her mother.

It is in this context that the "creepy" objects appeared around two weeks back, making her parents feel "super uncomfortable."

"As much as the neighbours and my parents have a different religion, we respect each and every religion. But with this around and the cursing and swearing, it is getting out of hand."

The objects include a miniature coffin with what appears to be the words "升官发财" — typically used to signify riches and rising through the ranks. There also appears to be two green citrus fruits with a nail driven through them.

The meaning of the entire ensemble of objects is not immediately clear, but in response to the Facebook posts written by Tan and her sister, some commenters have suggested that the objects could be placed with malicious intent.

Calvin Chong, a spiritual master and fengshui practitioner at Ghostbuster 99, explained that there are different schools of thought and practices when it comes to fengshui.

"In my practice and school of thought, we do not use such items," he said, before adding, "According to my understanding, no fengshui (practitioners) will usually use this kind of item."

Kevin Foong, a professional fengshui consultant, also explained that this has "nothing to do with feng shui" and "is not a curse". He then suggested it's likely a  Taoist or Mao Shan practice.

Chong is unable to comment on whether or not the items were placed with any ill intentions because he does not have a full understanding of the situation. Responding to the suggestion that it might be some kind of "curse", he said:

"For any kind of curse to take effect, it needs to be enhanced and blessed by a master with some power. It depends on who is performing the ritual."

Neighbour insisted that they are prayer items

When Mothership went down to the scene on the evening of Nov. 26, the items could still be found along the corridor.

We spoke to the neighbours in question, a couple in their sixties (we'll refer to them as Mr and Mrs A as they do not want to be named) who insisted that the paper figures and paper coffin were prayer items.

Mr and Mrs A's story corroborated with what Tan told us. From what we heard from both parties, the conflict between the neighbours started eight years ago over an issue of corridor space usage.

All of the items on the corridor, except for the shoe rack, the prayer items, and a small section of potted plants, belong to Tan's family.

Over the years, both households — who subscribe to different religions — have installed CCTV cameras outside their houses and recorded incidences that they perceive to be acts of aggression.

Mr and Mrs A claimed that Tan's father pointed his middle finger at their prayer items, threw rubbish right in front of their doorstep, and trampled on their floor mat.

When we spoke to Mrs A and Tan's mother, both said that they have been affected mentally and emotionally by the conflict, but both families are not on speaking terms, choosing instead to involve intermediaries like the town council and the police.

Coming back to the paper figures, Mr A said that they will not be removing it as it's a prayer item, insisting that "that's nothing to fear if they (the neighbours) are not guilty".

Tan's parents have lodged complaints with the town council and even called the police after finding the objects under their window.

"We understand that this is a prayer item used by their neighbour for religious purposes," a spokesperson from Ang Mo Kio Town Council told Mothership in a statement on Nov. 26.

The spokesperson said that they will advise the resident to "remove the prayer item from the common corridor and to place it at their own doorstep". They will also work with the relevant agencies to resolve the situation.

The affected resident has also been advised to seek help from the Community Mediation Centre to resolve the issue amicably.

In the past week, Tan told Mothership that their family "started to clear off the things on the corridor".

This was after they offered a "compromise", suggesting that both parties remove all their things from the corridor.