It’s been more than a year since we could travel freely. Even with more Vaccinated Travel Lanes (VTL) opening up now, it’s going to be a while before air travel becomes the norm again.

Since the start of Covid-19, everyone’s been ping pong-ing between staycations and the occasional cruise trips to fulfil their wanderlust desires.

But somewhere along the way, cruises have also gained a sort of reputation for being jackpot-filled ships that only older people enjoy.

So to see if this is true, I embarked on a weekend trip with my cruise buddy, Huisi, in late October. It turned out to be an activity-packed minibreak that even we couldn’t keep up with. (Of course, if you wanted a more chill trip, you could do that as well.)

We did a lot over the course of the trip. Like, a lot. Here’s our itinerary on the Dream Cruises World Dream.

Our first day started at about 3pm after boarding. We immediately went to book our spots for the signature live show, the tie-dye T-shirt workshop, and the outdoor jacuzzi because we’re kiasu people who like to get things settled before we can feel truly relaxed.

After checking into our room, we explored the cruise for a bit, but got a little lost navigating through the different facilities and endless corridors.

It was the good kind of getting lost though, because we discovered places like these: 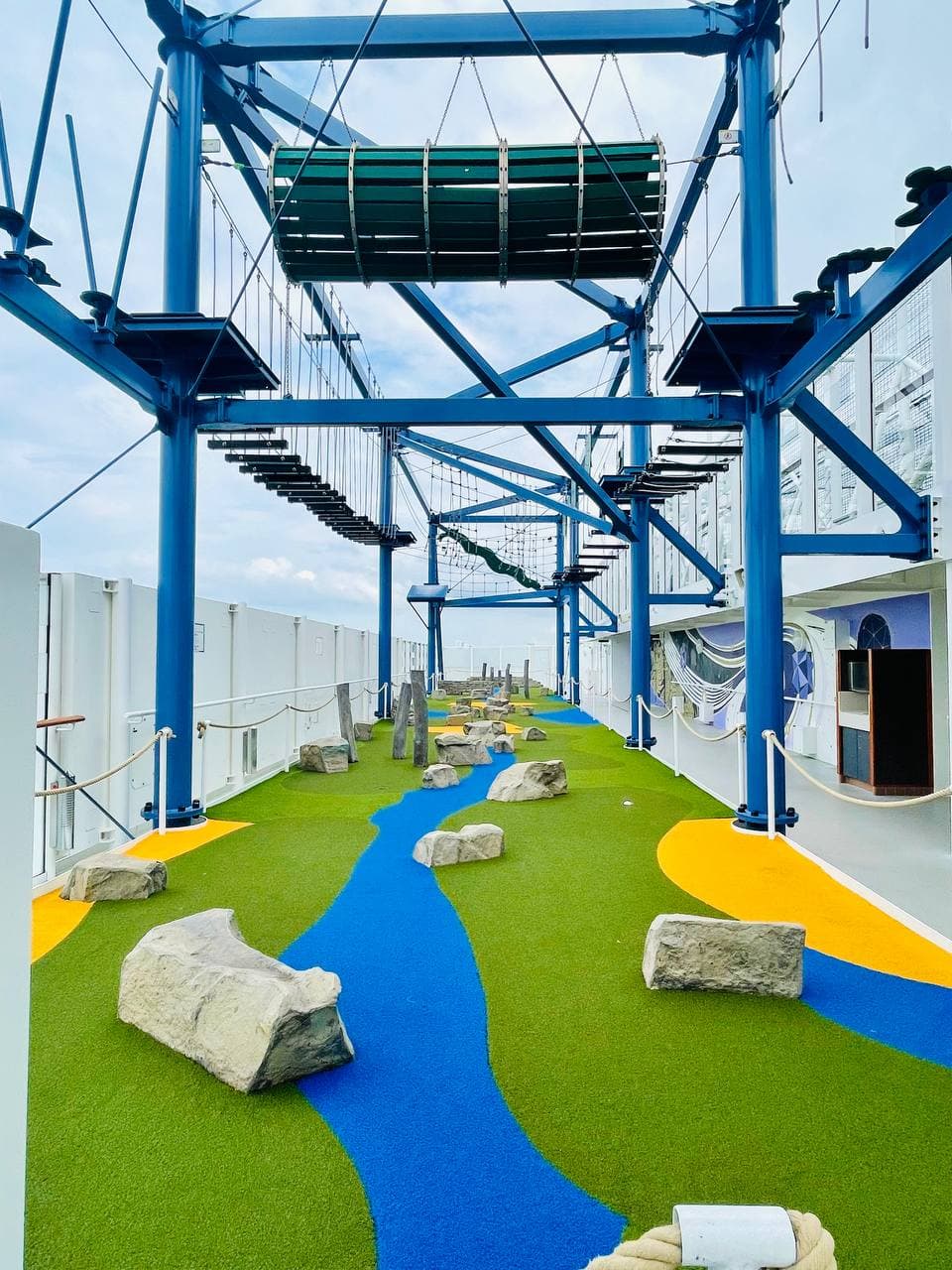 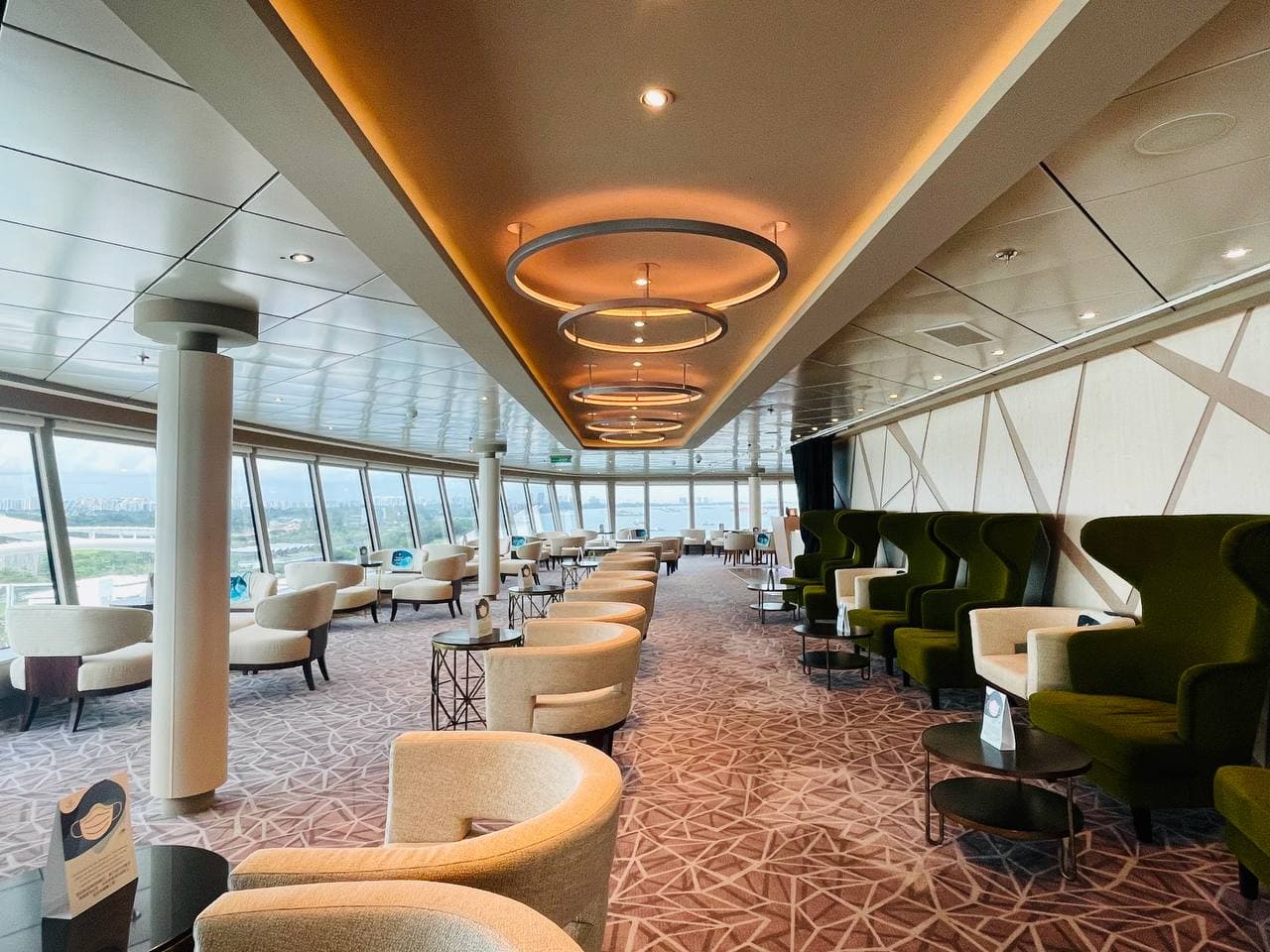 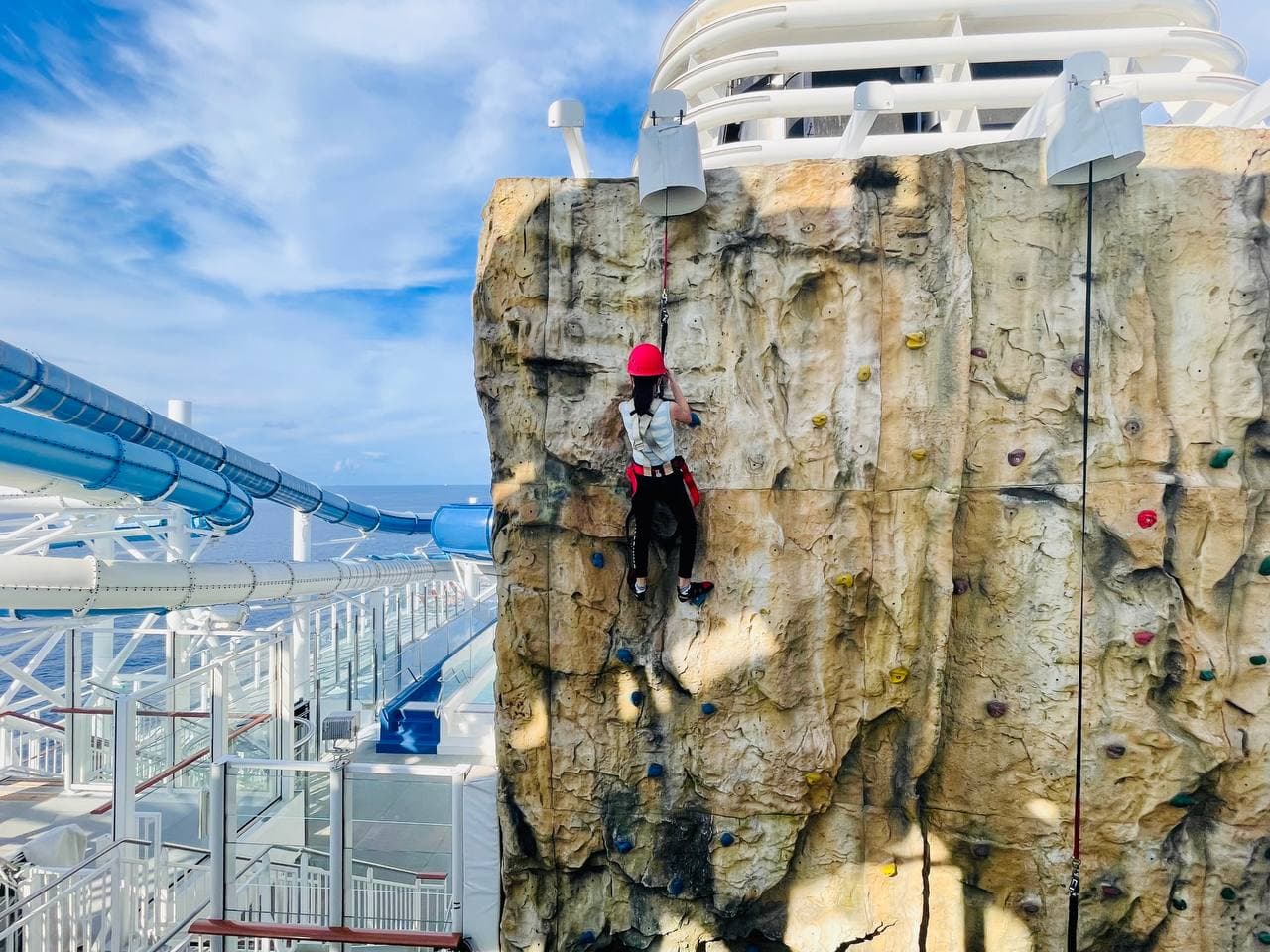 We were also taken on a tour to the Palace Villa, the most expensive room on board.

I’ll just let the pictures speak for themselves. 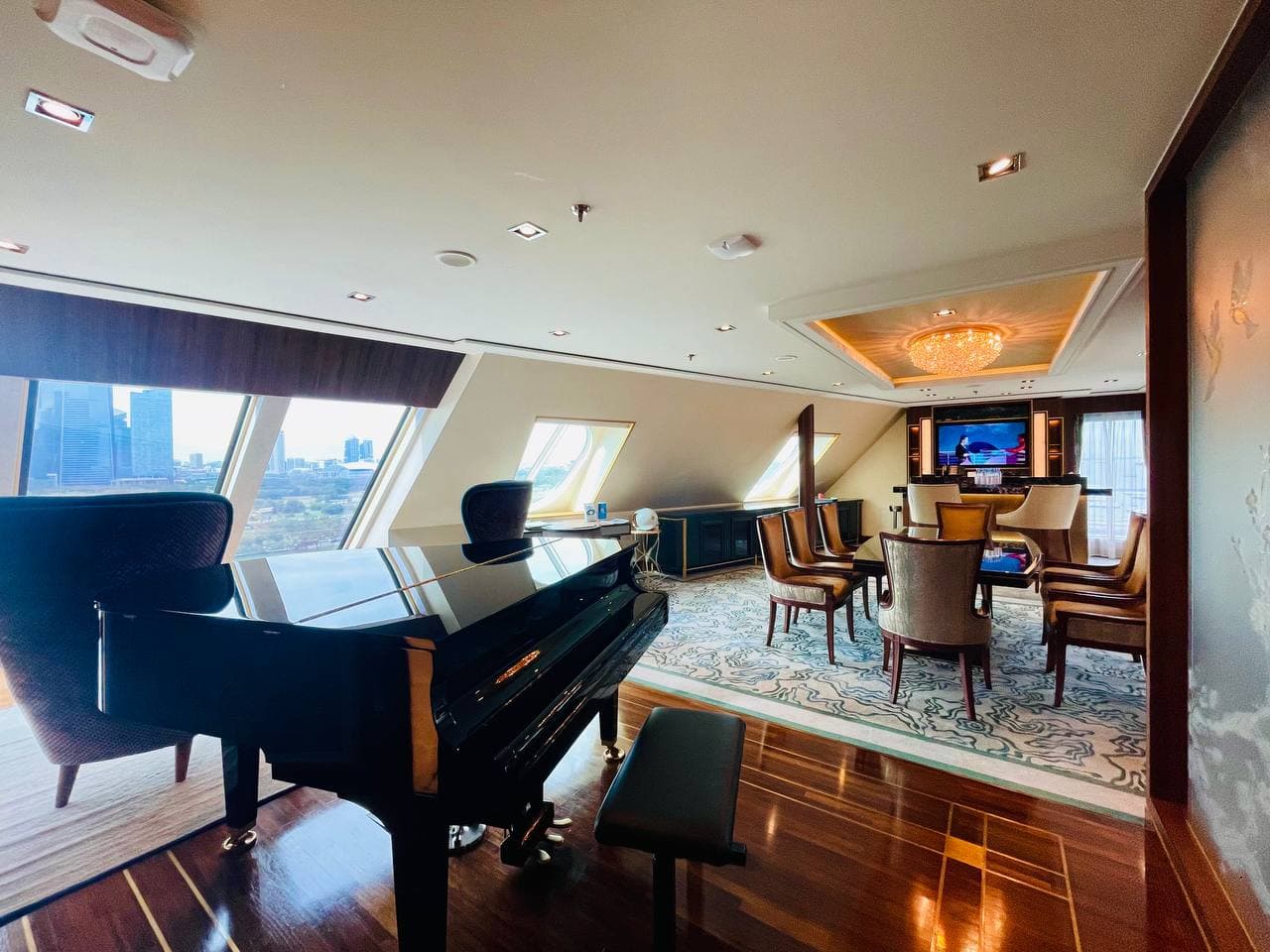 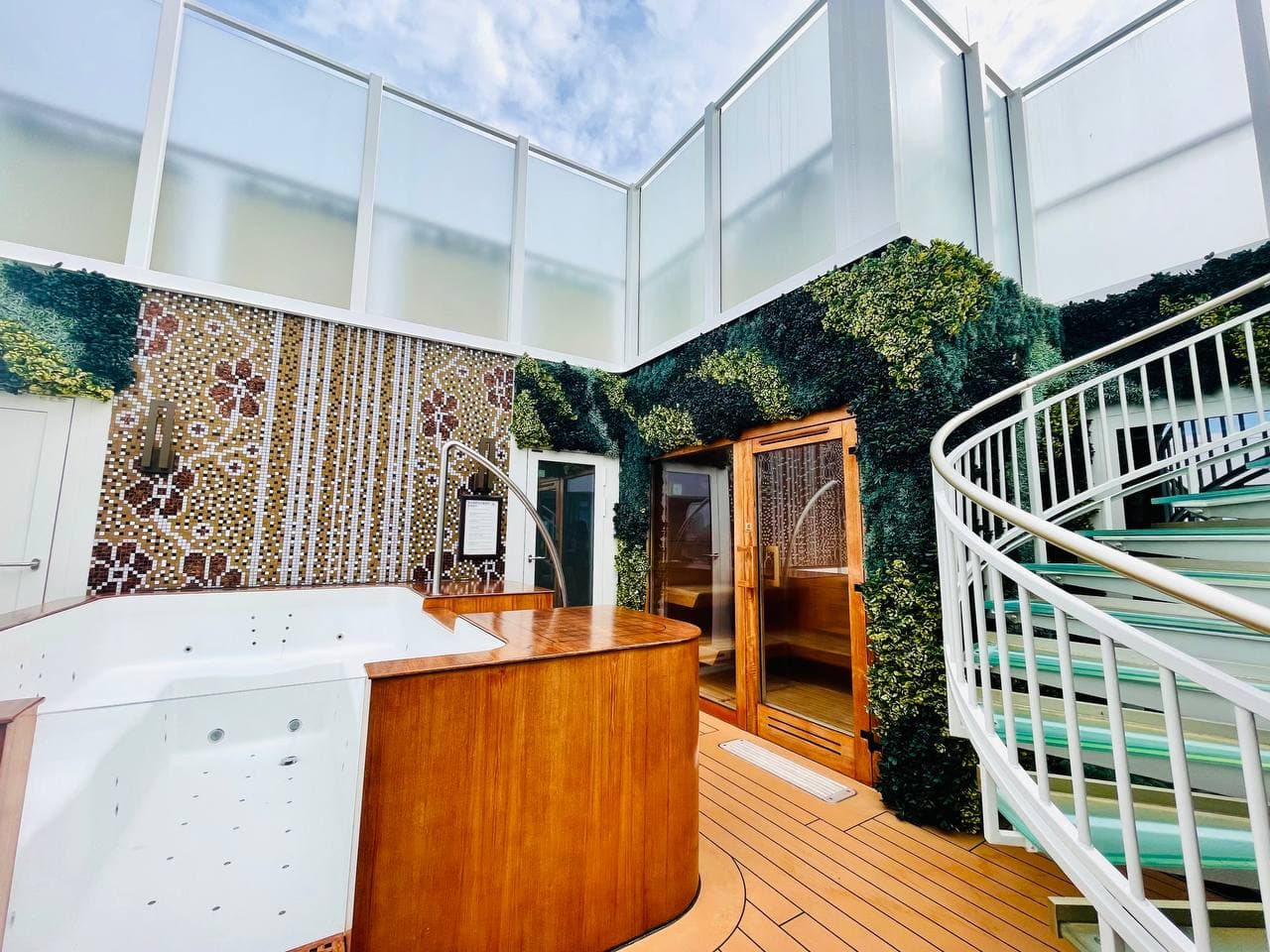 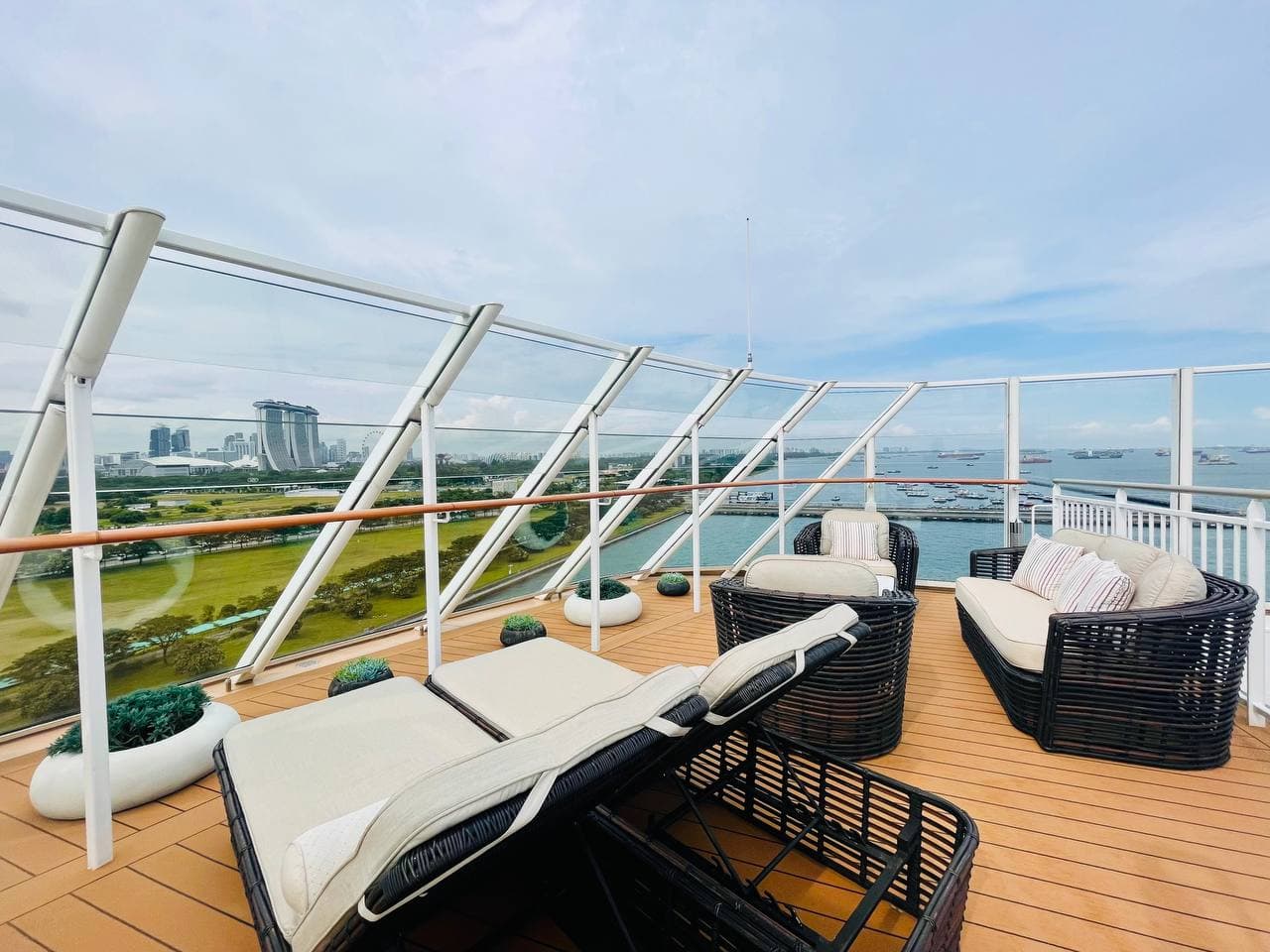 This was not our room, sadly, but it was definitely eye-opening to see the sort of rooms crazy rich Asians would book.

World Dream has a range of dining venues that include specialty restaurants like Prime Steakhouse by Mark Best, Hotpot by the Sea, Umi Uma, and more. Besides these, there are also complimentary “inclusive” dining venues like The Lido and Dream Dining Room.

Like the true Singaporeans we are, our legs (and stomachs) led us to Umi Uma, a Japanese and Korean restaurant, for teppanyaki. The restaurant carries an extensive menu -- From sushi, to bento sets, to table barbeque, and to teppanyaki.

The teppanyaki sets range from S$58 to S$98, and come with miso soup, a side salad, and dessert.

We decided to do a surf and turf dinner with the filet mignon with chicken set, and the scallops and prawns set. 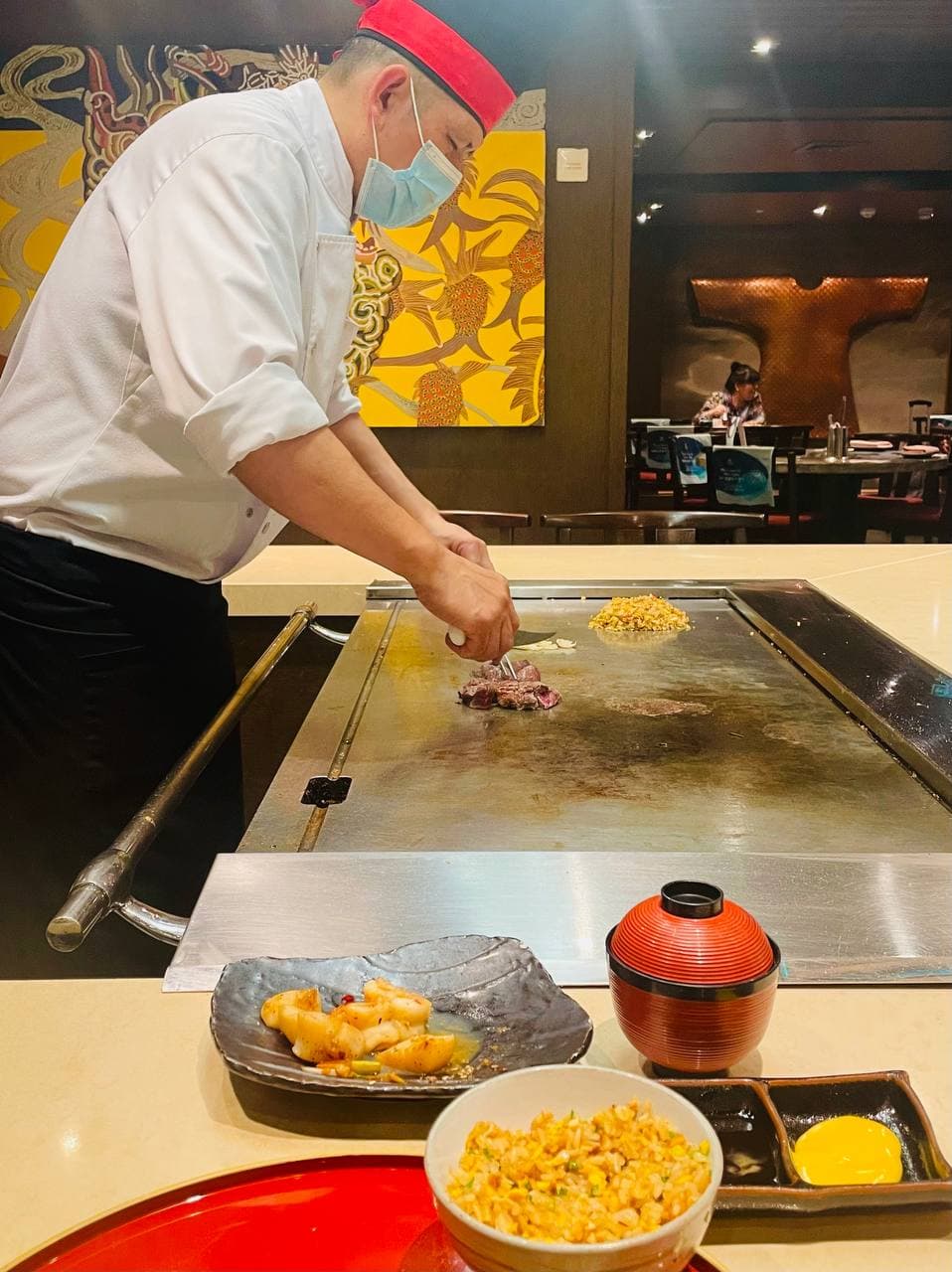 Besides watching our food being cooked in front of us, the other fun part of the meal was marvelling at the tricks the chef had up his sleeve.

Who doesn’t like seeing an omelette anaconda attack a piece of chicken?

We were stuffed after dinner, but still managed to waddle our way to Zodiac Theatre to catch “Faith”, the Cirque du Soleil-esque live show.

The night was still early when the show ended, so we checked out the Esc EXPERIENCE LAB for some VR games.

Huisi and I were drawn to Finger Coaster, a roller coaster simulation which allowed us to DIY our route.

As you can see, Huisi was not stingy with the loops. Then off we went. 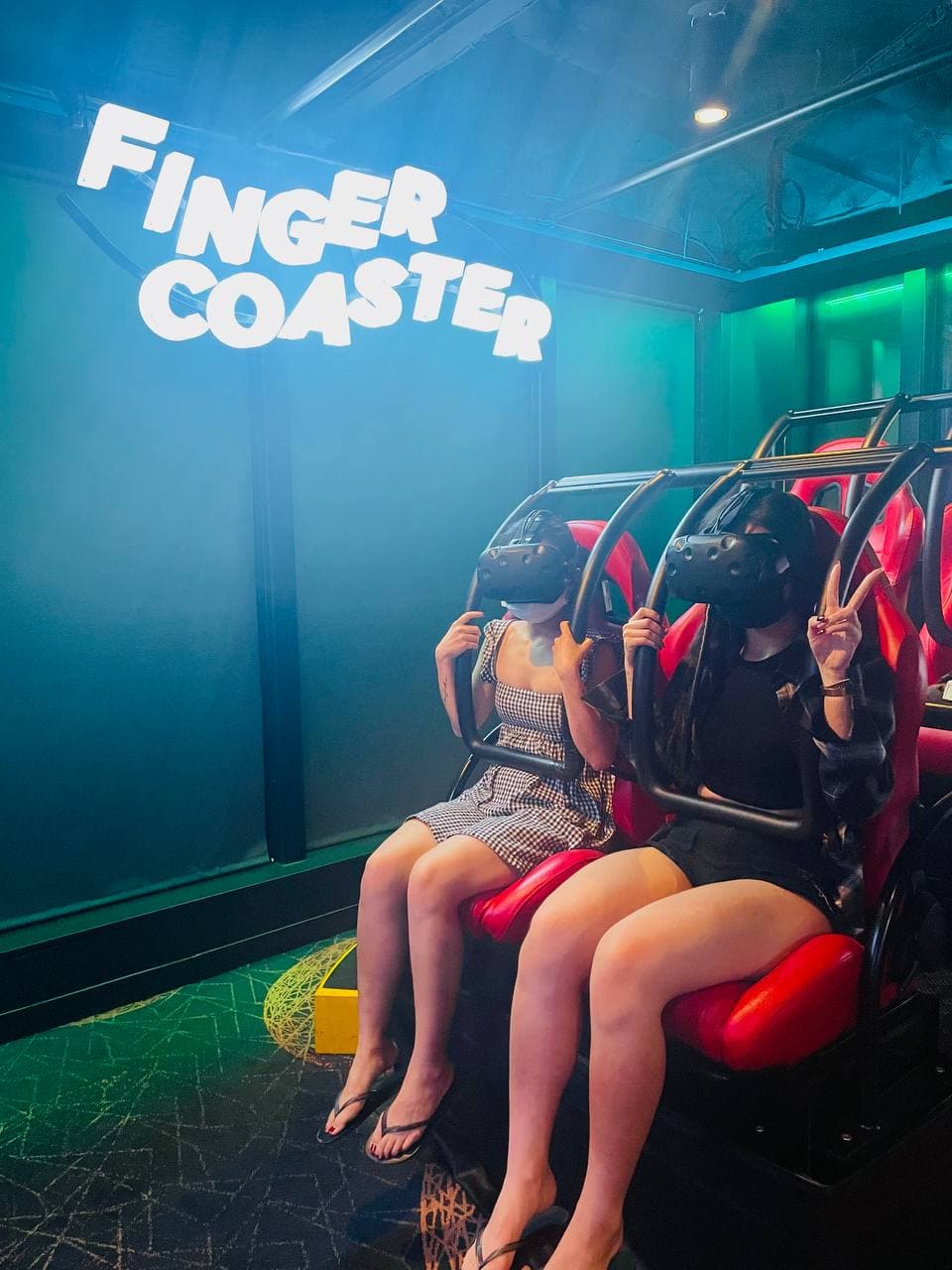 Overall it was quite fun, though we felt the ride was a little short.

And because it was so short, I had to fulfil my adrenaline rush quota by trying out the car racing simulation.

Although I was horrible at it and came second last, the ride was thoroughly enjoyable because of the 3D features with the jerks and bumps.

Our day 1 ended off with some drinks at the Zouk Beach Club. Not sure if it’s because we’re getting old but the Japan-inspired cocktails were way too sweet for us. Having said that, the other house pour drinks like gin & tonic and wine were good and very affordable at less than S$10 a glass.

Other than Zouk Beach Club, there were tons of other bars on board like Johnnie Walker House, Penfolds Wine Vault, and Bubbles Champagne bar.

The second day started off bright and early (at least for us) at 8am. We were excited because we had a lot of things planned for the day. But first, we headed up to the buffet-style restaurant, The Lido, to get fueled up.

The lido also had a halal section with different food options for people on a halal diet.

As people who love being spoilt for choice, we were happy to be presented with a variety of cuisines.

It was hard to settle on what to eat, so in the end, we had a bit of almost everything. 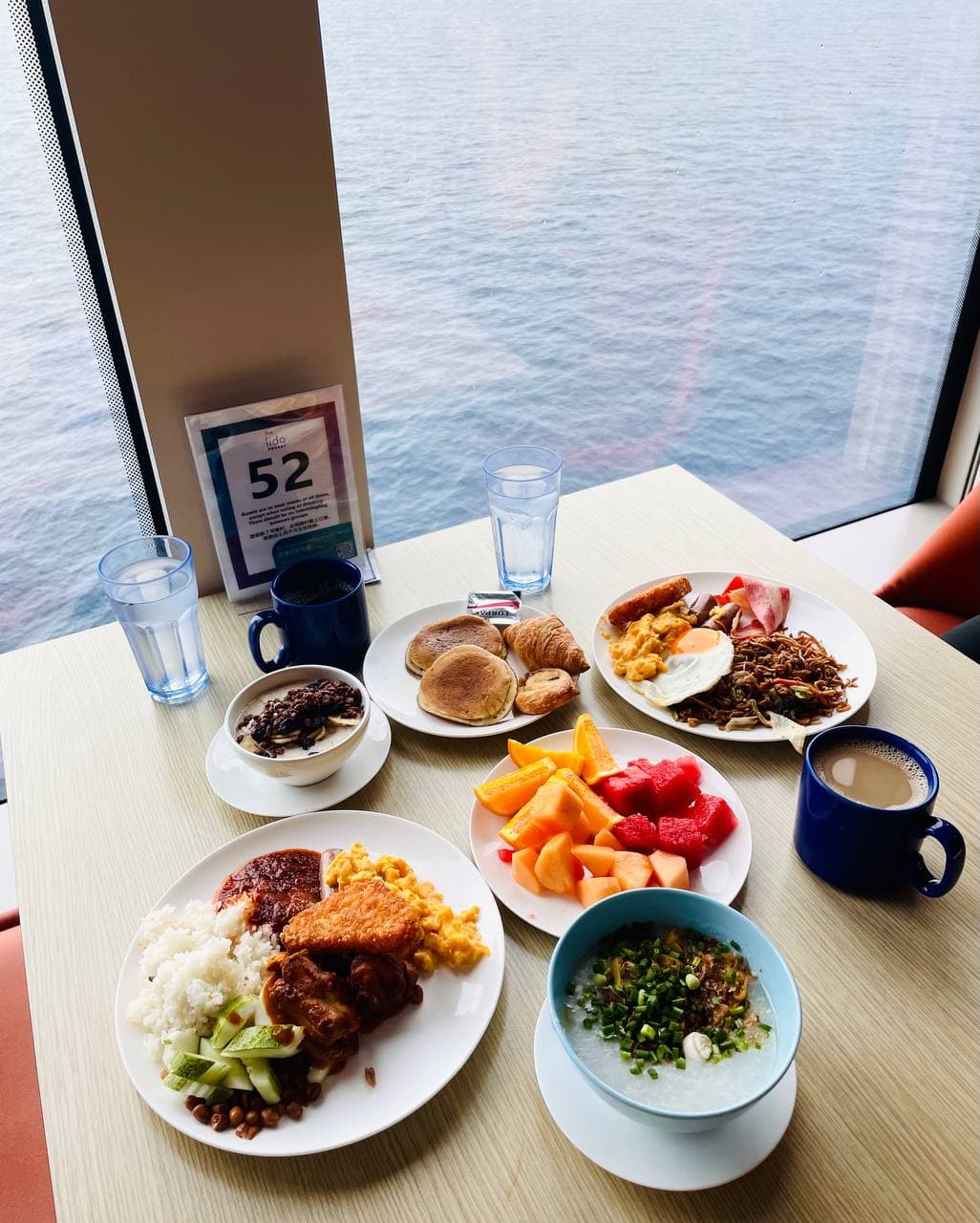 After breakfast, it was time to conquer the high-element ropes course. I’ll admit, as someone who’s afraid of heights, I was quite intimidated by the outdoor ropes course. Huisi, on the other hand, was excited about the idea of risking her life for some fun (totally kidding, it’s very safe).

Situated high up on deck 18 and overlooking the ocean, participants had to complete a set of obstacles before ziplining back to the starting point. I was probably too focused on not falling to truly enjoy the ocean views around me, but when I finished the ropes course and got to the ziplining part, my attention was captured by the glistening waters again. The view up there was really something else. 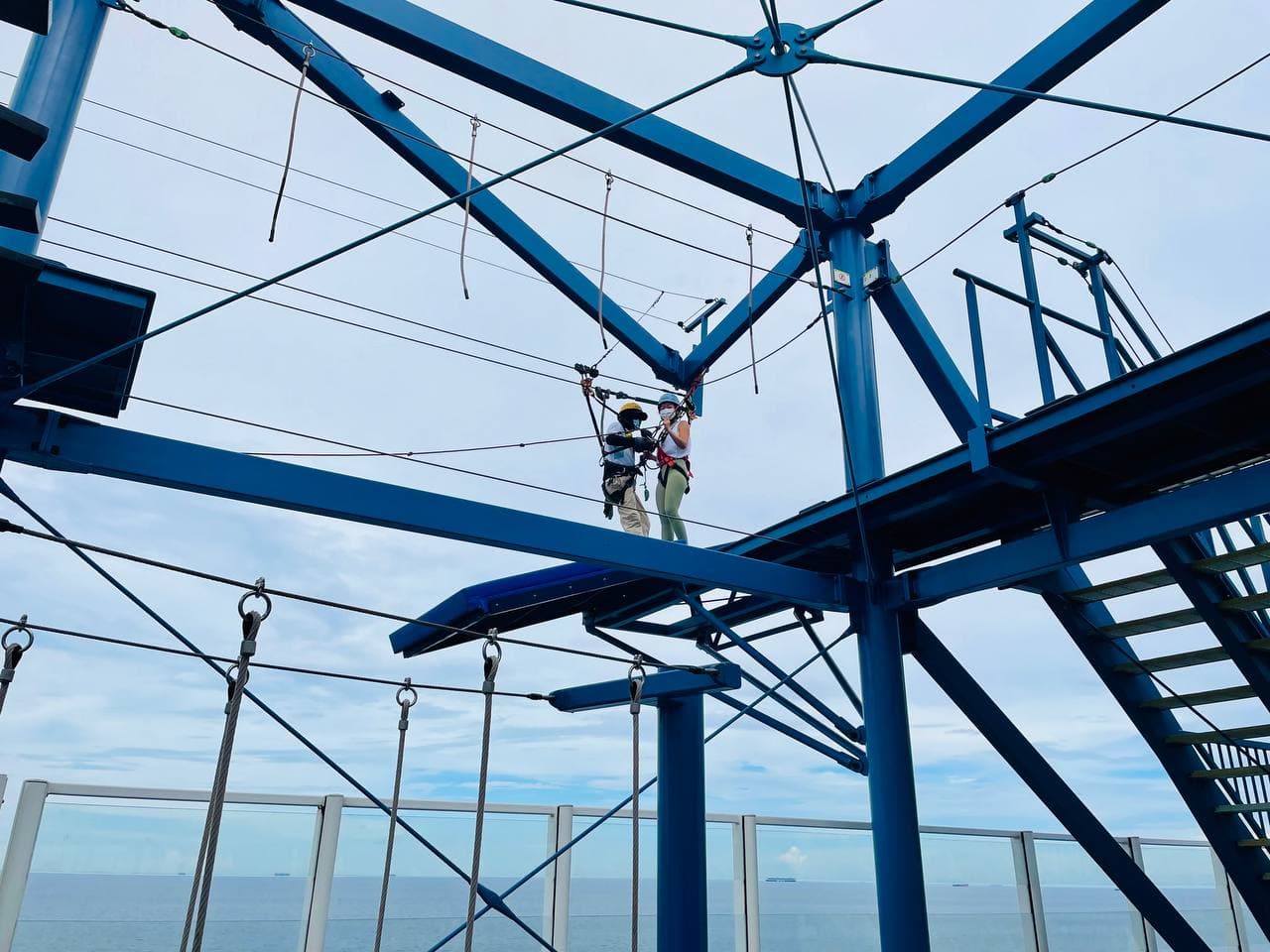 Because we felt guilty for eating so much for breakfast, we decided to hit the gym after the ropes course. 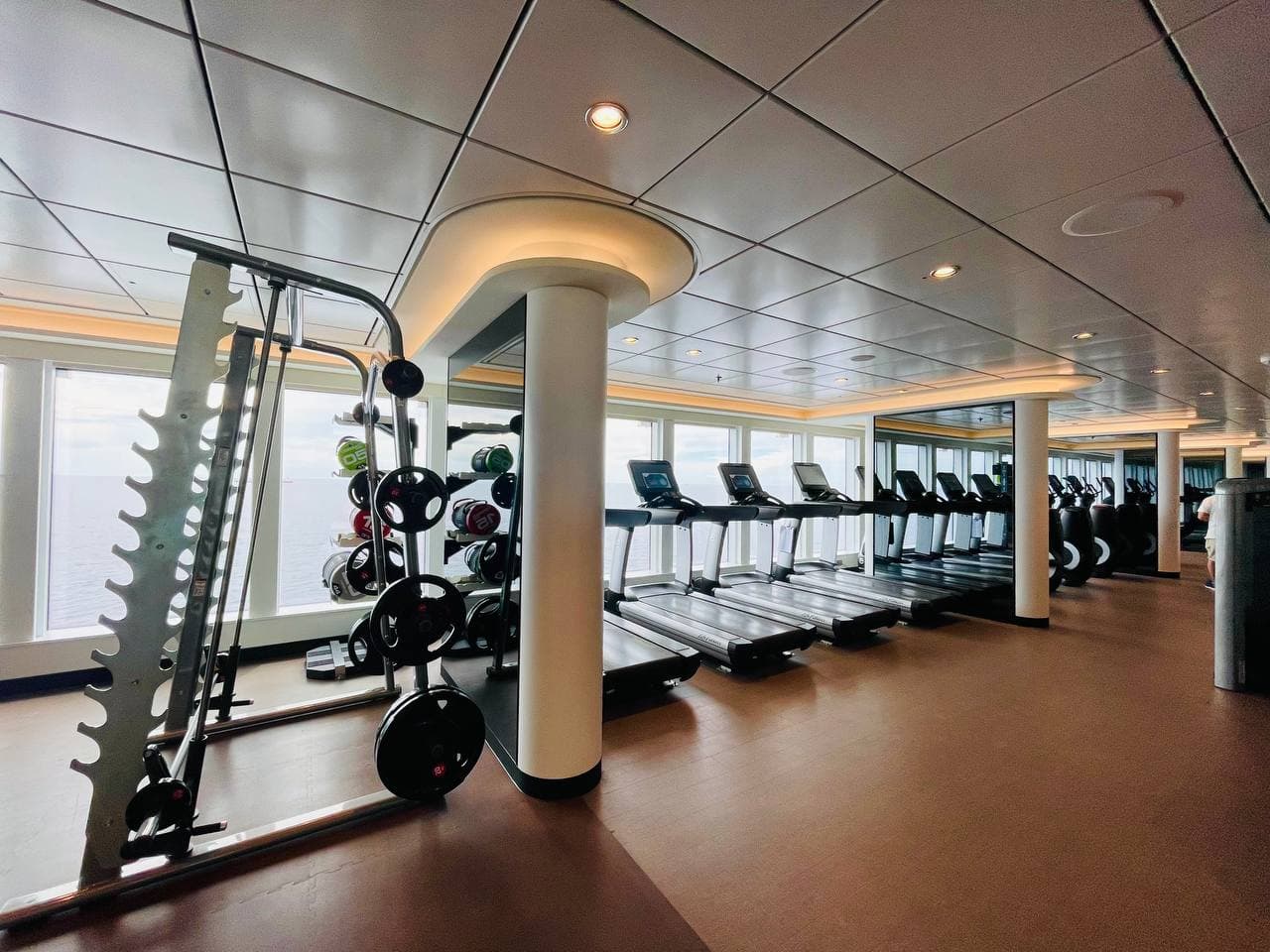 The gym was well-equipped and spacious. The large windows also meant that we could focus on panoramic views of the ocean instead of the aches we were putting our bodies through.

After lunch at The Lido, we rested for a bit in our room before going for a late afternoon soak in the outdoor jacuzzi.

It felt nice to have our backs “massaged” by water jets after the strenuous morning we had.

However, all the physical activity that day didn’t put us off going to the waterslides. I mean c’mon, just look at them. 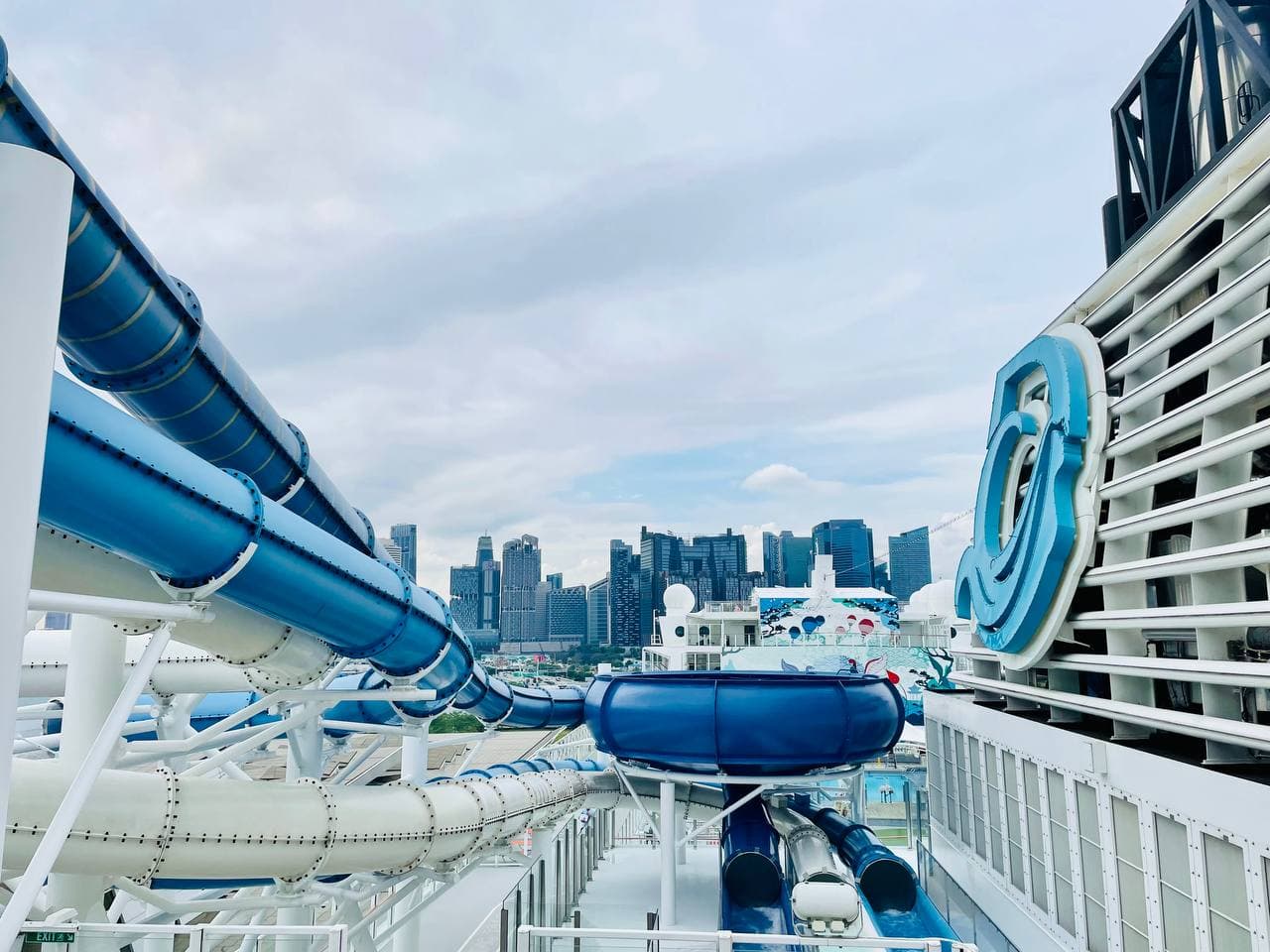 Fortunately, the slides weren’t crowded when we went, so we had the luxury of going a few rounds on them.

After a quick shower, we hurried over to the tie-dye T-shirt workshop which we had booked the day before.

Three very friendly and patient staff walked us through the process of making a hippie staple. 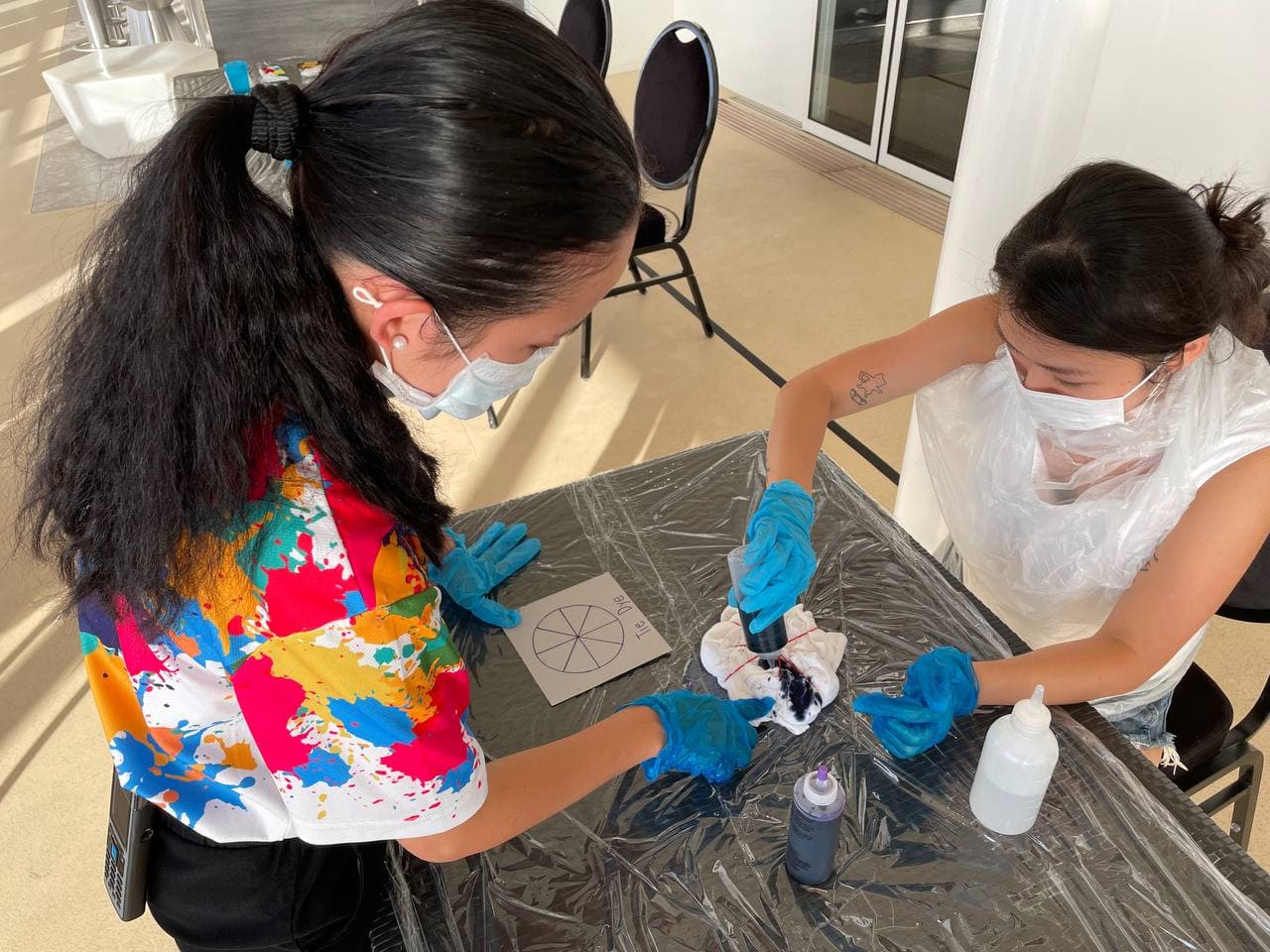 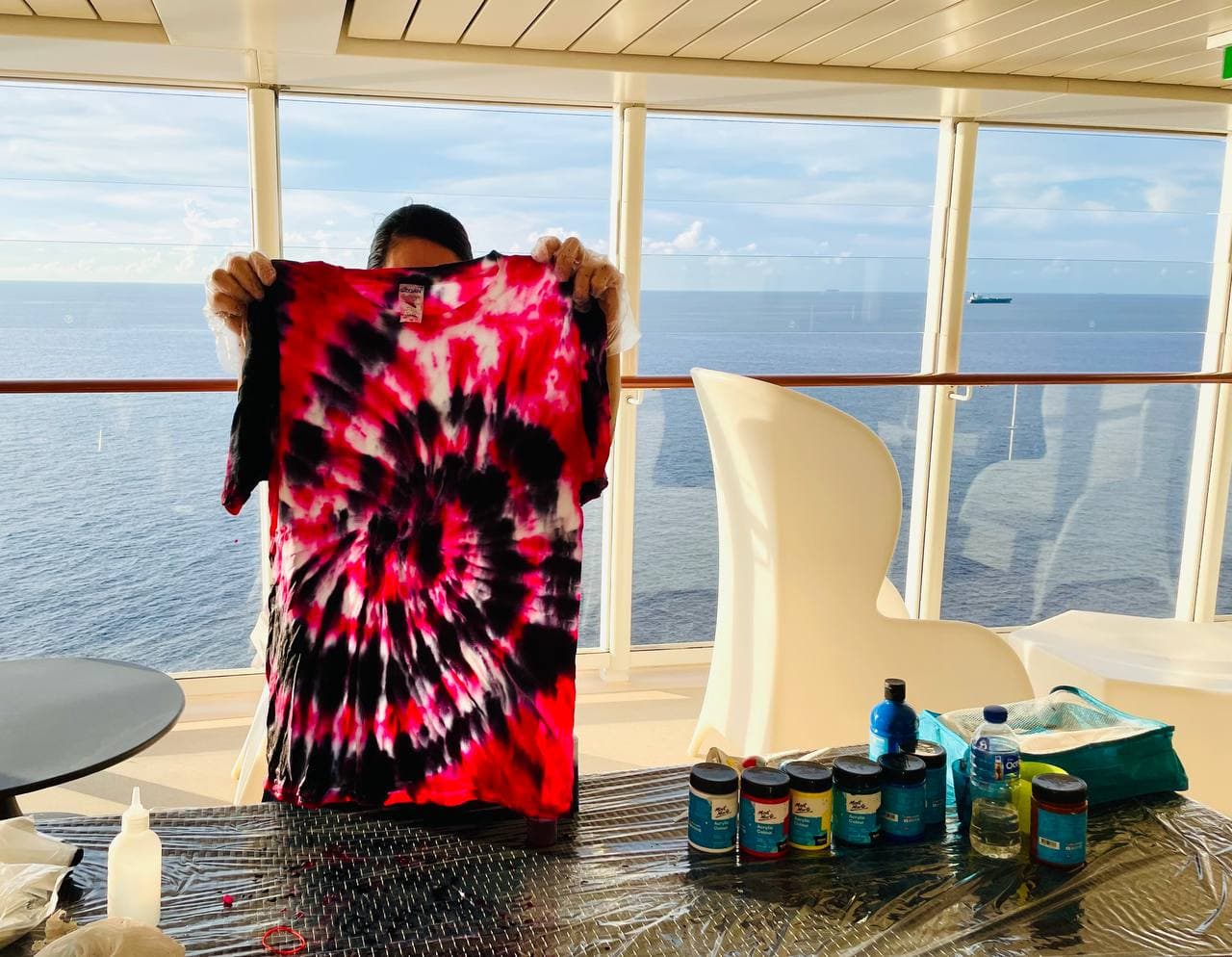 As we had to let the dyes absorb into the T-shirt for 48 hours, the staff did a quick sample on the spot to show us how it’s supposed to turn out.

Dinner on day two was at the Dream Dining Room, the other inclusive restaurant on board. The chinese meal was served to us family-style, and included a mix of protein and vegetables. 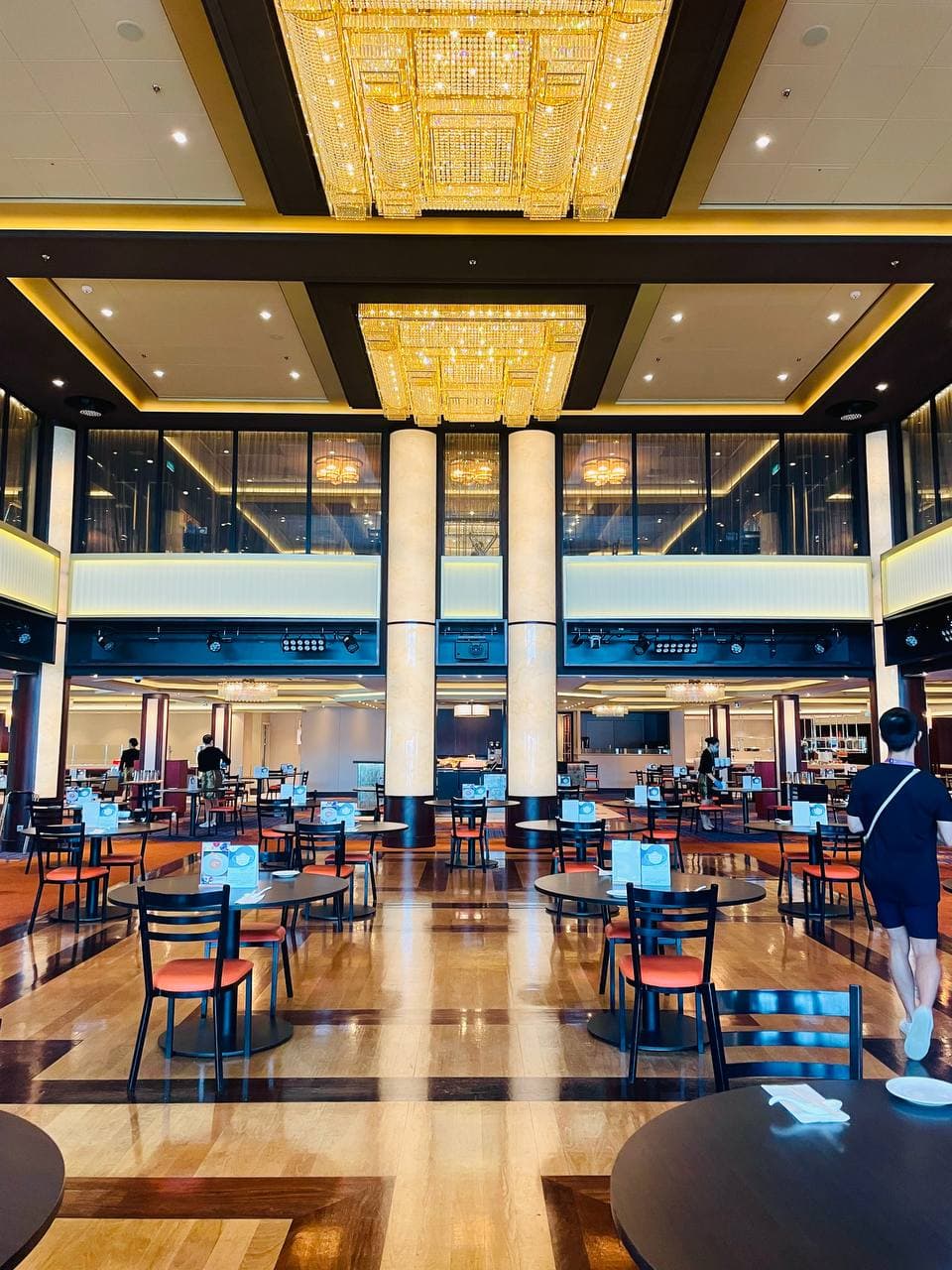 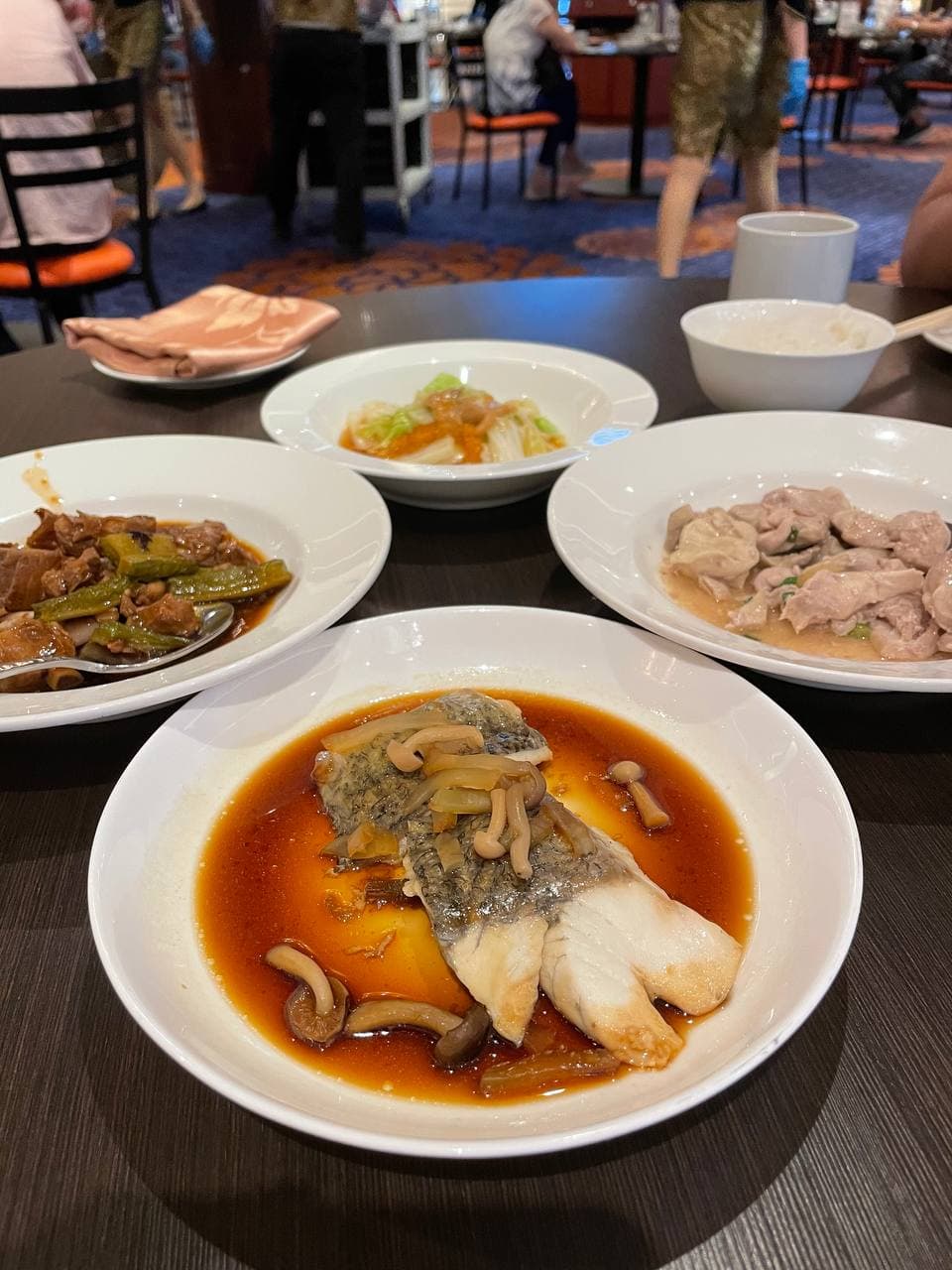 The dishes were nothing to shout about, but still filled us up nonetheless.

I was done for the day at this point, but Huisi insisted that we catch the laser show at the upper pool deck before heading back to the room. So I (begrudgingly) agreed.

We had a nice stroll walking to the vantage point at the deck, though. It almost felt like we were in a romantic music video with the sea breeze in our hair and the gentle sound of crashing waves.

However, the romantic music video mood immediately changed into an upbeat one when the laser show started.

The darkness of the ocean provided the perfect backdrop for the vivid light rays and smoke from the laser show.

Although we had to disembark at 1030am, Huisi and I still managed to squeeze in a dim sum breakfast at Blue Lagoon. The chargeable cafe operates 24 hours and serves both western and asian food. 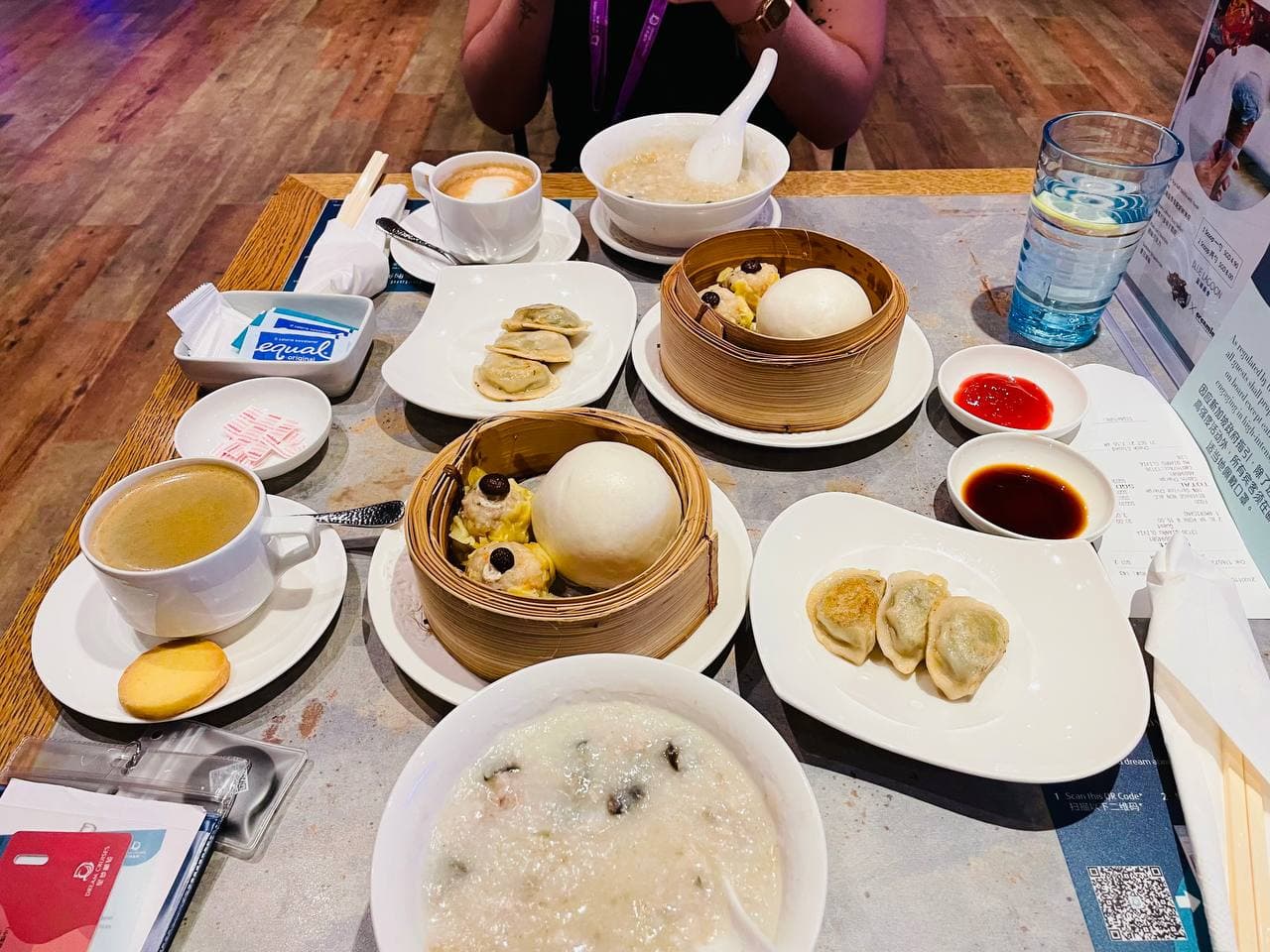 Can I just say… the congee here was superb. It was probably the best thing I ate on this trip. The unassuming dish was very tasty without being too salty, and the congee texture was just the right amount of silkiness.

We went back to our room to enjoy the balcony view a bit more before checking out.

All in all, the cruise trip felt like a staycation on steroids packed with a ton of facilities and activities on board.

And for just a couple hundred more bucks (compared to a hotel room), I think it’s quite worth it considering the free food from the inclusive restaurants that come with the cruise tickets.

All photos by Olivia Lin unless otherwise stated

Visit the Dream Cruises website to find out more.

Psst.. book your trip soon to experience the upcoming Nordic Christmas Adventure, which features Christmas themed events and workshops, as well as tons of festive food.

This sponsored article in collaboration with Dream Cruises makes this writer want to save up enough money to book the Palace Villa.