Local pet care provider The Fur Room has been at the centre of criticism from pet lovers and owners after a groomer was caught on video rough-handling a poodle.

A representative of The Fur Room released a public apology and statement about the incident on Oct. 26.

The Animal & Veterinary Service (AVS) is also looking into the case.

New statement from groomer in question

In the earlier statement released by Victoria from The Fur Room's Instagram page, they said that the poodle was "challenging to groom due to his hyper-activeness".

Seeing as the poodle's owner was a regular patron at The Fur Room, the groomers "took for granted [their] familiarity" with the poodle's owner and "was rougher with [the poodle] during this particular grooming session as he wasn't cooperating with us", they explained.

According to Victoria, the incident was a "one-off negligence" on its part and investigations are underway.

Subsequently, the groomer in question, Jessie Lim, has come forward to clarify her side of the story via Instagram.

Lim clarified that she deliberately chose not to leash the poodle on the table in order to allow him to "be more comfortable" during the grooming experience.

Addressing the moment when the poodle fell off the grooming table, the groomer from The Fur Room acknowledged that it was her fault for failing to notice that the dog was too close to the edge as she was focused on his paws.

According to Lim, her hand was "under the poodle's chin" while "prodding" his tail at the same time to "encourage the dog to stand still" and "minimise any risks" during the the trimming.

She maintains the dog "was not in pain" - he was not yelping - based on her observation. She also claims that she would have stopped what she was doing if that were the case.

The statement includes an apology to the owners and everyone, which is specific to her failure of preventing the dog from falling off the table.

She ends the statement by saying that she will step down from her position as a groomer.

You can read the full statement here:

The owners of the dog have identified themselves via their Instagram page @mister.miso_.

In a series of Instagram stories, the owners shared their thoughts on the incident and reassured their followers about their dog's well-being after the incident.

According to the owners, they've been closely monitoring their Maltipoo named Miso who is "doing fine so far" and thank everyone for their concern and for spreading awareness about the incident. 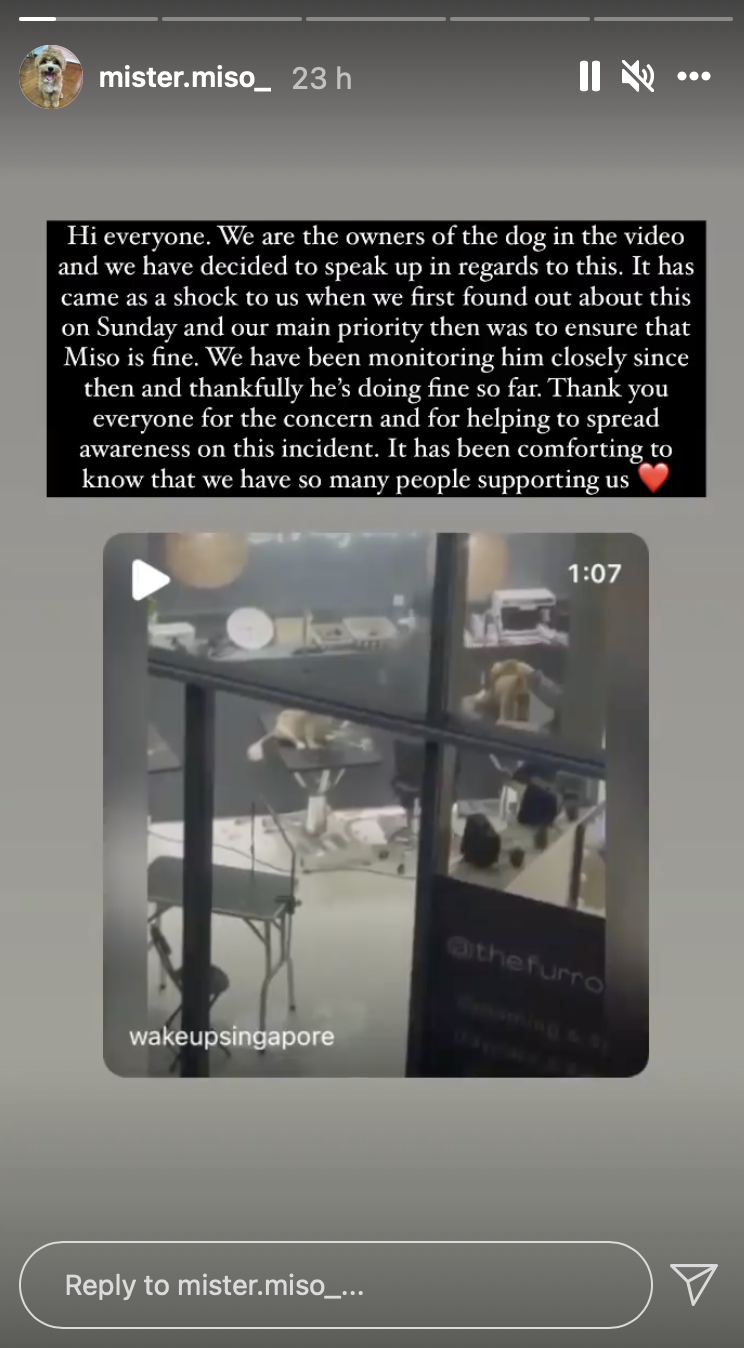 The owners disclosed that they've been bringing Miso to The Fur Room since he was a puppy, attesting to the trust they have in the pet care provider. Hence, it was heartbreaking for them to discover how Miso was treated.

They conceded that Miso is "hyperactive" and "might be difficult to groom" at times. However, they did not view that as an excuse for such behaviour from the groomer and cannot accept The Fur Room's apology. 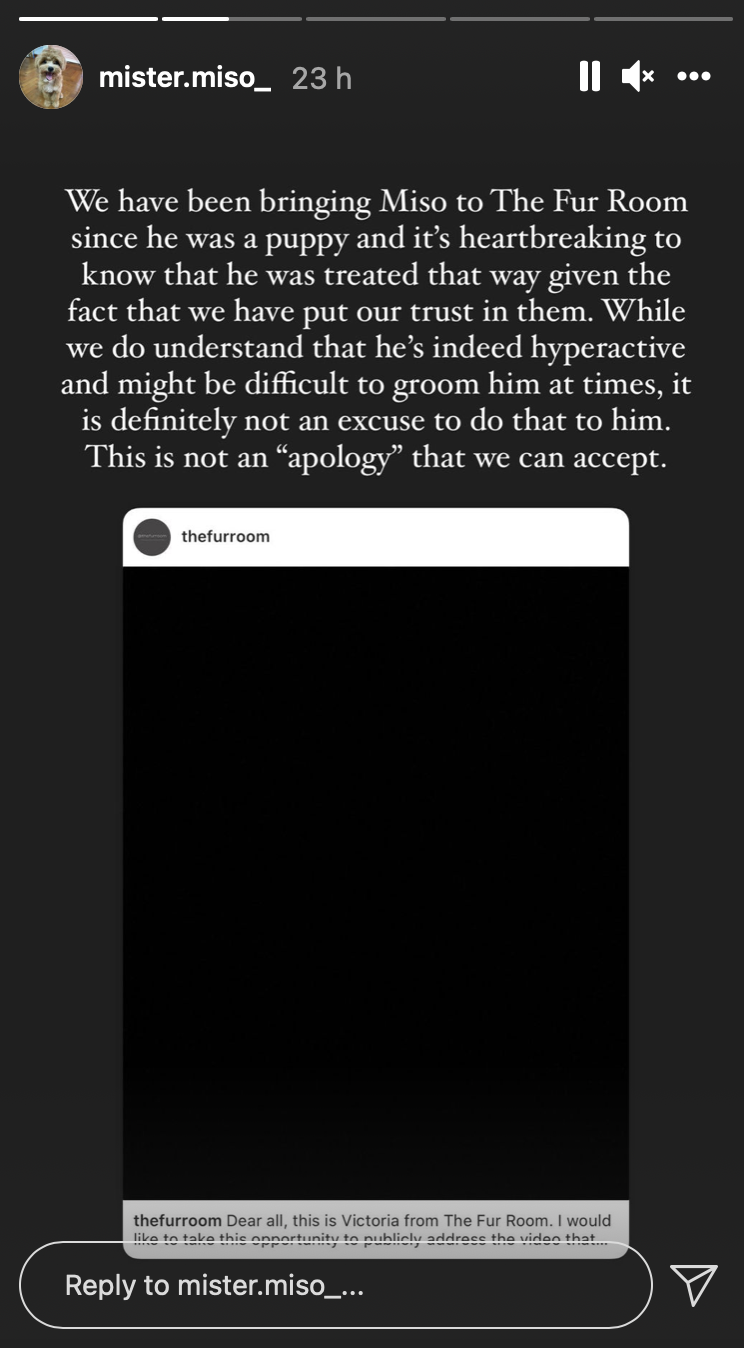 Miso's owners also revealed that they are in touch with AVS who are investigating the incident and will update them accordingly. 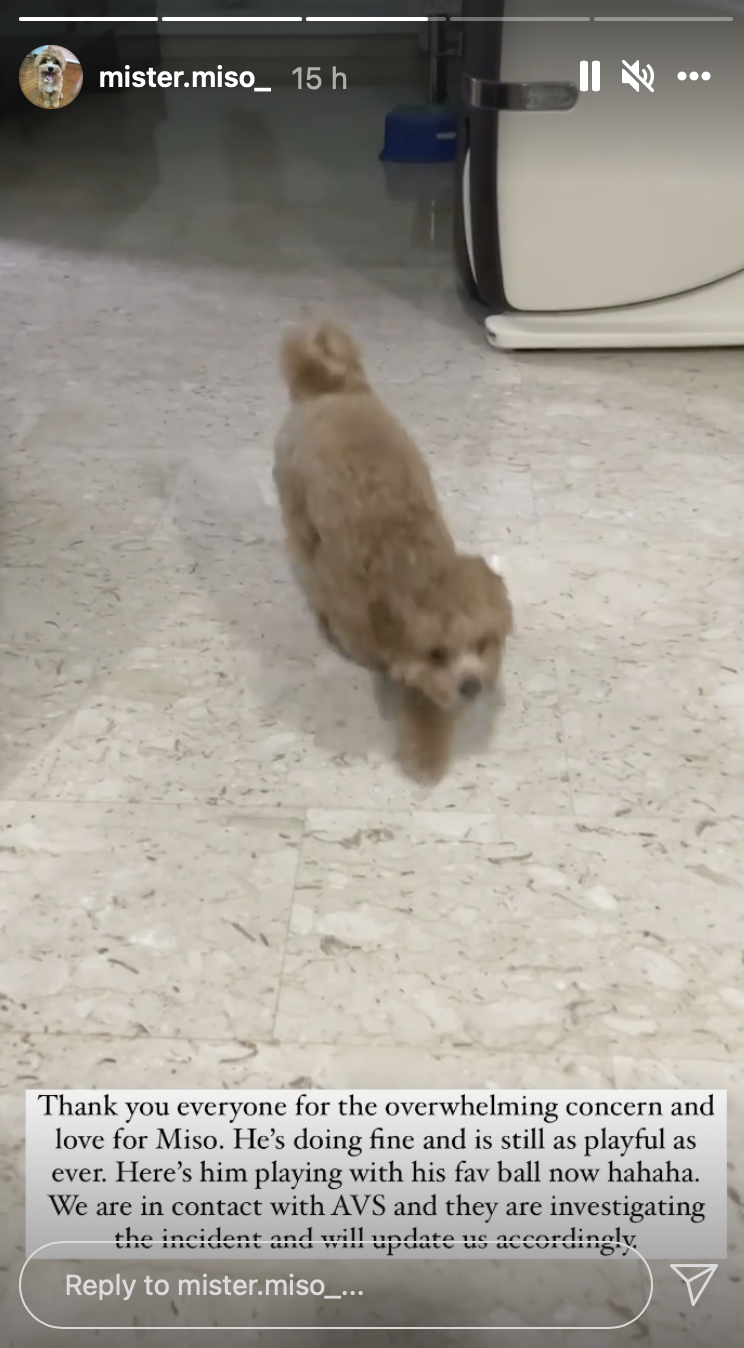 They also shared screenshots of the alleged groomer reassuring the sister-in-law of the Shih Tzu's owner that they "have never treated [the Shih Tzu] in this way before".

While Miso is the victim in the video, the videos were not recorded by Miso's owner. Instead, it was filmed by the owner of the Shih Tzu who was being groomed at the next table. 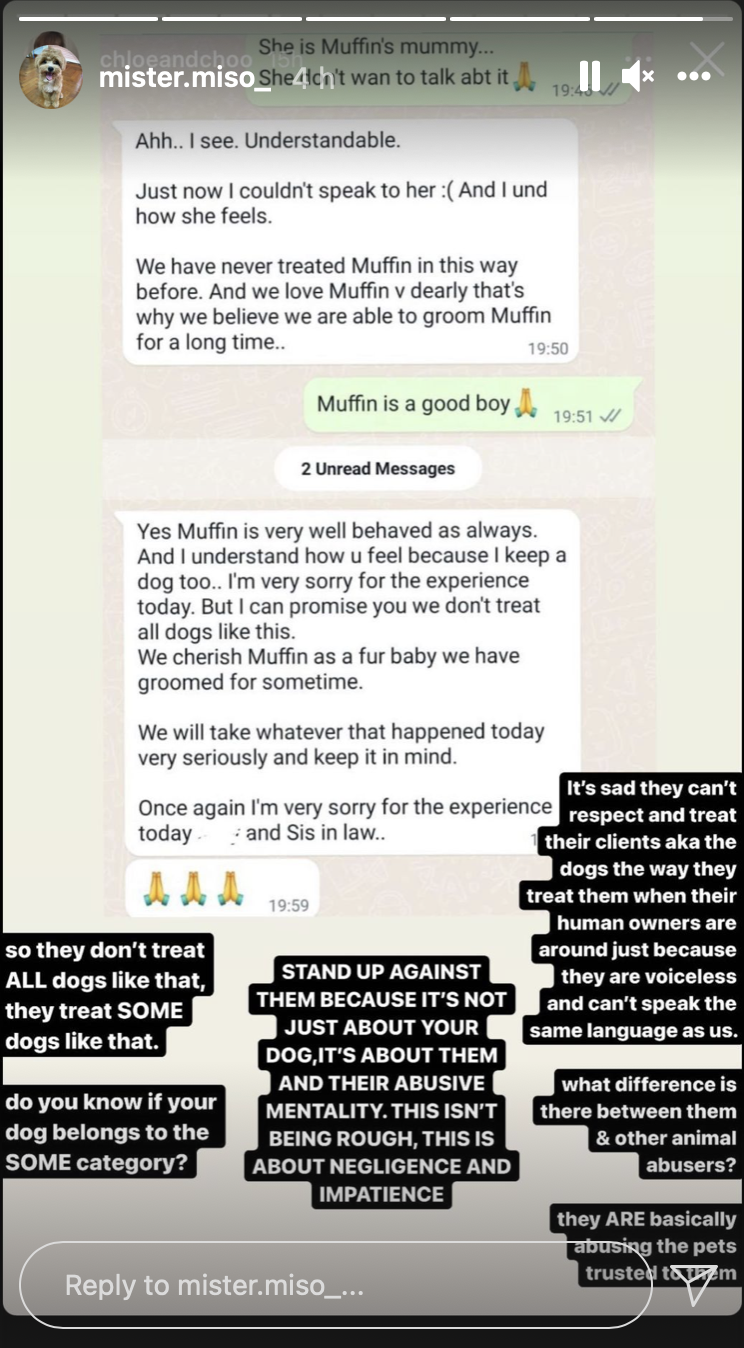 You can read more about the incident at The Fur Room here: