Faced with bullying at school and problems at home, Stanley Seet dropped out of school at Secondary 1.

While battling depression and anxiety, the 22-year-old singer-songwriter eventually found his purpose several years later, and at the same time, learned to embrace both the highs and lows in his life.

As a child, Seet never felt like he belonged.

Not at home, nor at school where he often found himself picked on. “I was outcast and bullied, and that really damaged my confidence,” shared Seet.

“I didn’t have much support from any adult figure and I just did everything alone,” said the only child, adding that he “grew up to become a very, very insecure teenager”.

His physical health was also impacted and Seet was hospitalised several times due to ailments that in hindsight were probably psychosomatic.

“I felt pain in random places, I felt dizzy and nauseous, but they’d do all the scans and there was nothing wrong.”

When he was in Secondary 1, Seet decided to drop out of school after just one month. “I was skipping school and doing all I can to avoid school. I just thought, ‘I cannot do this [anymore]’.”

He was put through counselling, but Seet was not ready to listen, even when social workers would come by his house. “I listened to them talk, but I don’t think anything they said got into my head.”

“I was comfortable after dropping out of school and not having to face the problems outside anymore.”

However, Seet admitted that he didn’t derive much joy from that time in his life where he was basically “doing nothing”.

“I don’t think I was happy, I was just avoiding everything.” Seet felt himself slowly sinking into depression.

“I was living with no sense of purpose, no goal in mind, and I was very, very unhealthy, both in body and mind.

“I gained a lot of weight during that period because all I did was sleep, eat and sit at the computer to play games. Sometimes I didn't even shave or shower. It was just a very, very dark moment in my life where I wasn't functioning.”

Music had always been his passion, but he was in a slump that even his favourite artiste, Taylor Swift, couldn’t pull him out of. Back then, it didn’t occur to the teenager that music could be a viable pursuit.

“I didn’t know you could study music in Singapore. It was all about the usual poly, JC and uni route,” he said.

It wasn’t until two years later at the age of 15 that Seet rediscovered his love for music, thanks to a friend who dragged him to an open house event at LASALLE College of the Arts.

Seet recalled standing enraptured, listening to a band playing up on stage. “I was like ‘Wow, the singer is damn good’.” And at that moment, something clicked in his head. “I remembered, ‘Oh yah’ [I used to love] music.”

With his passion reignited, Seet enrolled in the school’s Diploma in Music, but little did he know that it was the beginning of another path fraught with difficulties.

The first hurdle was having to pass his ‘O’ levels. But for the first time, Seet found a direction in his life, and with that, the drive within him to pursue his dream. He sought advice from a counsellor from Singapore Association for Mental Health (SAMH), whom he was previously in contact with.

“I finally realised I had something to hold on to, which is music. When you have a goal in mind, you want to make it happen, no matter what,” said Seet, who began to take a more active approach in his mental health journey.

“I reached out for help more and with all the ups and downs that I faced, I would tell my social worker everything.”

But there were many times along the way where Seet would falter in his studies and anxiety reared its ugly head.

Still, he eventually managed to cram four years’ of knowledge within two years and passed his ‘O’ level examinations on his second try, something that he is proud of.

“I really think I managed to pull through because my love for music was there, and I really wanted to stop living like how I was living before.”

But at LASALLE, Seet once again found himself riddled with anxiety and depression from the constant pressure to perform, quite literally.

“It was like a talent show every week where you’d be judged by your lecturer and your classmates,” he said.

“In my first year, my hopes were immediately dashed,” said Seet, who felt out of touch with the school environment.

Seet’s lack of a music background in comparison to the rest of his course mates also shook his confidence and made him feel “very small”. “I felt like the worst singer and musician in class.”

Seet, who had begun taking medication for his condition by then, shared: “I had just started on the road to recovery and I think this wasn’t something I was prepared for.”

Once again, Seet crashed, and it led to a period where he was hospitalised for several days and stopped going to school.

During that time, Seet lost faith in his ability to do music, with his mind clouded with thoughts that “maybe my parents were right, and maybe society was right”.

The turning point, however, came when Seet confided in his programme leader at LASALLE about his struggles.

“He made a special arrangement for me, so I was going to school but not attending classes, just talking to him,” said Seet, describing the helping hand as “one of the best things” to have happened to him at LASALLE.

Seet felt safe knowing that someone in school knew about his condition and had his back. With the lecturer’s help, along with the LASALLE’s student welfare team, school no longer felt like such a lonely place. 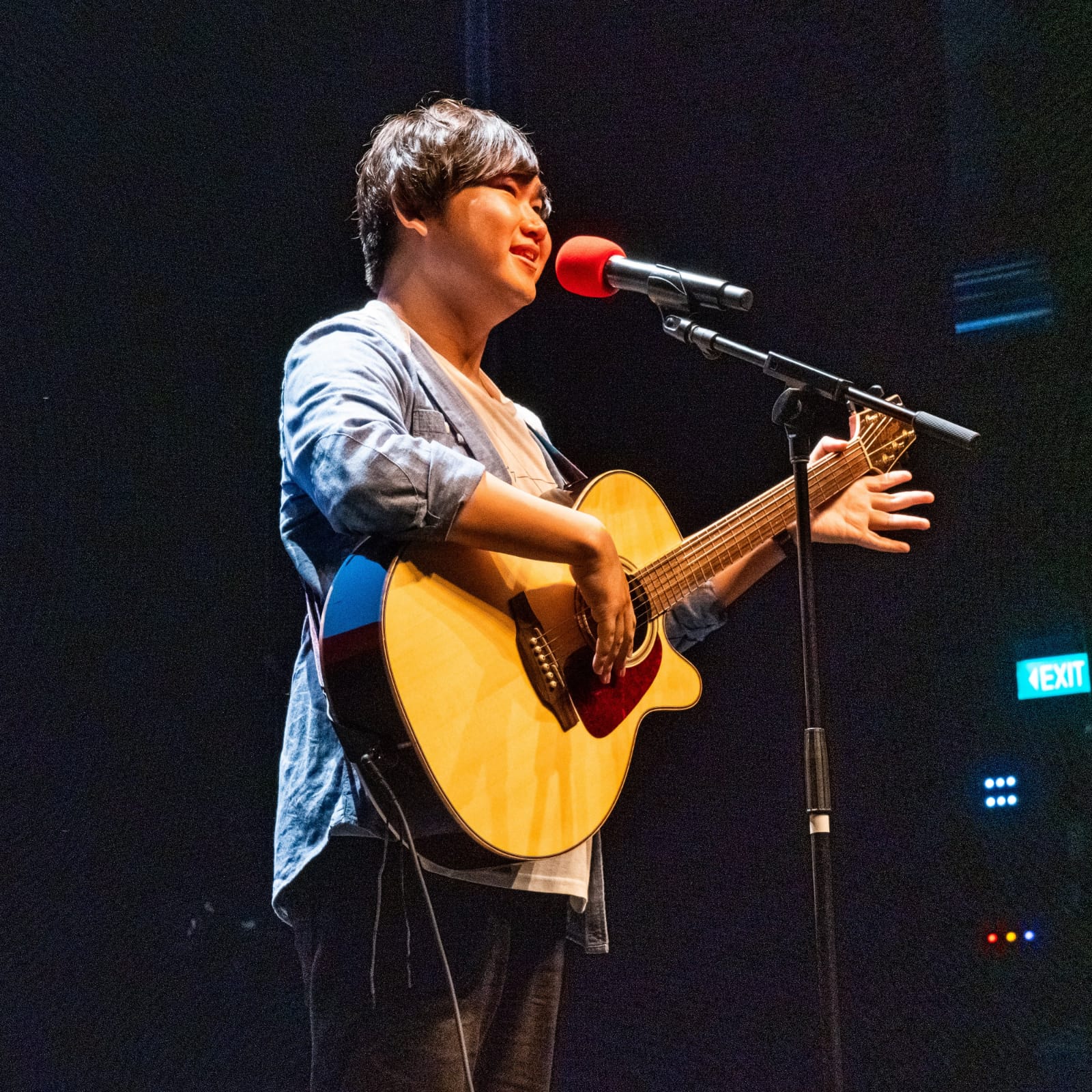 For his final year project last year, Seet decided that he wanted to release an EP of his self-written songs.

“The only thing that got me through [the difficult times] was writing my own material,” said Seet, “because that was how I expressed my feelings”.

His mini-album of three songs centres on his story as well as his emotions, which highlights how when it comes to mental well-being, “recovery is non-linear”.

“You just have to fall down and get up, again and again.”

He also came upon the idea of producing physical copies of the songs and donating the proceeds to SAMH, “because without SAMH, I wouldn’t be in LASALLE”.

That was when he chanced upon the National Youth Council’s (NYC) Young ChangeMakers grant, which supports young people who wish to kickstart projects for the benefit of the community.

“The programme felt aligned with what I was trying to do. It's very community-based and it's about supporting young people like me who are trying to do something for society,” said Seet.

His first single, In The Dark, was released digitally on September 20, and the full EP is expected to go out in November. It was delayed by two months due to Covid-19 restrictions, as there had been outreach sessions planned in tandem with the launch, which Seet still hopes to fulfil.

Helping others to help himself

Describing his journey with mental health, Seet shared the importance of voicing your emotions.

“The first stage is always avoidance. You don’t want to admit that you’re depressed, because then people will think you’re crazy. But you have to talk about it”.

To that, Seet credits SAMH for “training” him to share his story, over and over again and through various avenues. Over time, it became easier to talk about his struggles.

“SAMH also gave me so many opportunities. I eventually got back on my feet because they (SAMH) kept pulling me back,” shared Seet.

With all the support that he’d been given, Seet felt compelled to give back in other ways.

Seet began giving free guitar lessons to youths at SAMH, in order for them to experience the same healing that music has given him.

But the self-taught guitarist has no illusions about who is really benefiting from their time together.

“You would think that volunteering to teach is like ‘wah, so nice of you’, but no, it actually helps me because it builds my confidence,” Seet shared candidly.

“It makes me feel as though I'm functioning well, and I can be a role model to these young teenagers. So even though I proposed the idea to them, I think they were the ones helping me,” laughed Seet.

Given all that he’s been through, how does Seet think others can help those who are struggling?

“Personally I don’t use the term helping people,” shared Seet of how the phrase makes one party “in a higher standing” than the other. Instead, Seet prefers to state that he “works with people”, “because it’s also about learning from them as well”.

One simple thing that people can do for someone else, shared Seet, would just be to ask, “how are you doing? Or are you okay, and I’ll be here for you.”

“Not everyone wants someone to listen to all their problems, and even if they do, they’d rather go to a professional.

“It’s just the act of being there for the person, and giving them a sense of security that you’d be there for them no matter what.”

‘It’s okay not be be perfect all the time’

And with Seet being a Young ChangeMaker, what does he most hope to change?

Normalising mental health issues would be his top priority, because “it’s really just like any other illness.”

“I hope society can reach a point where we are able to take mental health leave, even from regular GPs.”

“And I hope people will realise that it’s normal to have tough periods in your life. It’s okay to not be perfect all the time, and to not always be efficient.”

In other words, “it’s okay to be human”.

And for himself, the next big part of his life journey is a rite of passage that all young men in Singapore go though — NS.

Although the prospect does give him “minor anxiety”, Seet is glad that he is able to look back on everything that he has accomplished so far.

Surmounting those difficulties has given Seet the confidence that no matter what happens, “I’ll be able to pull through”.

To Seet, one of the most powerful things one can do for themselves, “but only when they are ready”, is to change their perspectives and mindset.

“If you're willing to change the way you're living and your worldview, then you can slowly make a positive change to the people around you, sometimes without you even knowing it. It all begins with yourself.”

Looking to make a positive change in the community? The Young ChangeMakers (YCM) supports young people, aged 15 to 35, with seed funding to carry out community projects.

For more information on the YCM programme, click here.

This article is brought to you by the National Youth Council.