Two drivers found themselves in a standoff at a T-junction in a HDB carpark, both unable to proceed on their way.

Both cars were apparently in each others' path, even though the drivers were both on two-way roads with no other obstructions.

Frustrated at not being able to move forward, one driver got out of his car and uttered some choice language at the other driver, which only resulted in both cars staying stuck for even longer.

The incident — which apparently happened somewhere in Hougang — was captured on video and uploaded to TikTok.

"Can't he just move in front?" asks a voice, off camera, as a red car and a grey car are seen stationary at a t-junction.

The red car seems to have come to a halt at a stop line, in order to give way to traffic ahead.

Meanwhile, the driver of the grey car appears to want to turn left.

Neither car moves, and after a few seconds, the driver of the grey car gets out.

"Eh, eh you go then I go also lah, together, stupid b*****d you!" says the driver sarcastically, in the opening salvo to a tense — but somewhat comical — exchange, which was carried out in Malay, English, and Hokkien.

Much of the red car's driver's utterances were drowned out by the louder voice of the grey car's driver, whose shouts echoed around the neighbourhood, joining the morning chorus of barking dogs and chirping birds.

Here's the exchange, which featured many mentions of genitalia:

The driver of the grey car then gets back in, and the two drivers resolve the issue by both moving forward at the same time.

"What's so difficult?" asks the voice near the camera, as the cars both proceed on their way.

After both drivers executed their turns, it was clear why they had ended up deadlocked: the driver of the grey car had apparently misjudged the turn or turned late.

The grey car could be seen making a left turn, crossing squarely across the line dividing traffic from either direction. 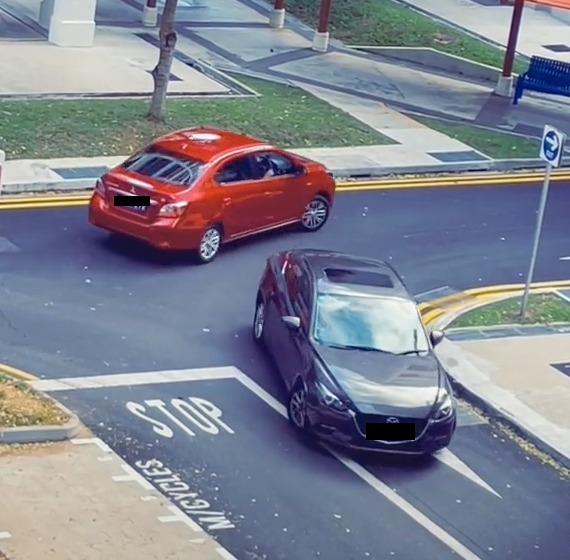 This means that if the grey car had continued its turn before the red car moved, the two vehicles would have collided.

Nonetheless, it's not clear whether the driver of the red car had done anything to antagonise the other driver before the video was filmed.

Commenters also said that the driver of the red car possibly made things difficult for the other driver by driving closely to the dividing line, given that there was a fair amount of space on his left side.