One motorist recently spotted something out of the ordinary on the road in Eunos.

The motorist subsequently snapped this photo, where it garnered over 530 shares on the Roads.sg Facebook page in less than a day.

Considering there are around 974,000 vehicles in Singapore (as of 2020), each with their unique VRN for identification purposes, what are the odds of seeing two vehicles with the same license plate in the same area at the same time?

Glitch in the matrix perhaps?

Some netizens in the comments section certainly thought so, with others suspecting something fishy going on. Anyone convicted of forging a license plate can be fined up to S$5,000, jailed for one year, or both.

There is however, a more likely reason which is much more practical.

Such a coincidence can occur when both vehicles are in the midst of changing their VRN.

Motorists can choose to retain their VRN instead of being reassigned a new one when purchasing a new car.

According to One Motoring, after an application to use the retained VRN for one's vehicle is approved, the motorist has a grace period of three days to change the number plate on their vehicle to match the new VRN.

The two vehicles seen in the picture could thus have the same owner — having transferred the VRN to the newer vehicle, the older vehicle has yet to receive a replacement VRN.

If one intends to deregister their old vehicle within the three days, there will be no need to change its VRN.

Several netizens in the comments section also came to a similar conclusion. 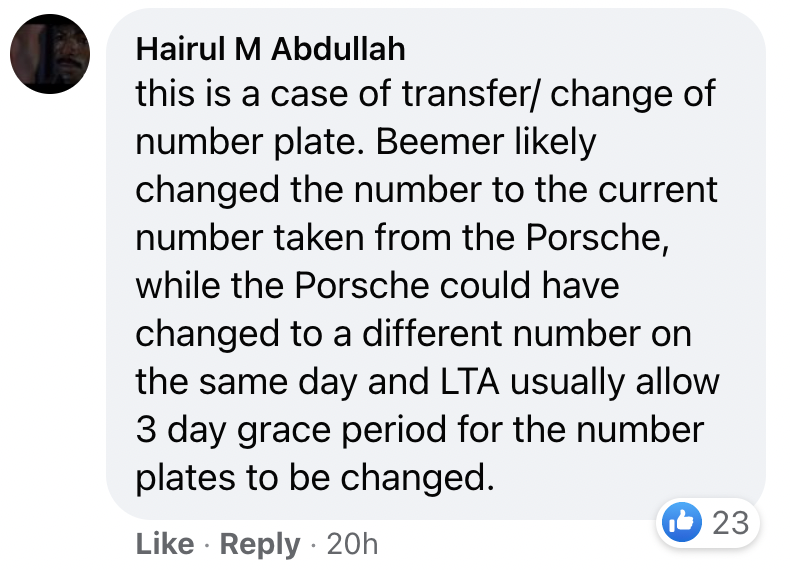