The Covid-19 restrictions have been more than just an inconvenience and disruption to our lives.

Some of us may find ourselves struggling with the surplus of time due to the restrictions on travel and certain social activities that used to occupy our schedules.

The blurred boundaries between work and home due to the work-from-home (WFH) arrangements, as well as social isolation, may contribute to issues such as cabin fever and burnout.

To take the edge off, I tried picking up e-books and audiobooks to de-stress, as well as make full use of my time at home.

My experience with e-books

For a period of time, I avoided indulging in activities I typically enjoy.

The pandemic had slowed things down so much that I felt unaccomplished and undeserving of any leisure time.

Besides binge watching cat videos, I decided to make time for the other activities I enjoy but have not done in a while, like reading.

In addition to the hassle of disinfecting library books, it’s also not ideal to wander around too much during a pandemic.

Hence, I turned to e-books such as the ones available on Storytel, an audiobook and e-book streaming service.

I was pleasantly surprised by the range of books available on Storytel for unlimited downloads that included quite a number on my to-read list.

It stocks e-books (and audiobooks) of my all-time favourite crime thriller author, Chris Carter (not the X-files guy!).

If you enjoy reading about gruesome serial murder stories like I do, Carter’s novels are an easy (dare I say, highly addictive) page-turner that will keep you at the edge of your seats. I recommend starting with “The Crucifix Killer”, which is the first of the series, although the narrative of each novel does not rely much on previous novels.

I had started the series with the second book, “The Executioner”, years ago given it was the only physical copy available to me. Nonetheless, I was able to follow the story without having read the first one.

For those who appreciate good Singapore literature, Storytel’s catalogue also has “Sugarbread” and “Inheritance”, both by Bali Kaur Jaswal -- a local author whom I’ve heard rave reviews about.

I started on “Sugarbread”, which revolves around Pin, a young Sikh girl growing up in Singapore during the 90s.

When I mentioned my new read to a friend, she shared with me that she recently re-read Knut Hamsun’s “Hunger”, a book that we had read before for school a couple of years ago.

“Hunger” is about a starving artist who sees himself as an outsider and slowly loses his grip on reality.

Regardless if you are an avid reader or not, it’s worth giving Storytel a chance.

They are also growing their collections for kids and young adults respectively so no one in the family will feel left out.

Netflix addicts who are curious about the books that inspired the television or movie remake may want to check out the following:

Besides spending time on reading, a self-care tip I’ve heard is to break the monotony by trying something new.

One of the new things I’ve been meaning to try is listening to audiobooks.

I’ve tried listening to podcasts a few times but I always found myself getting restless and tuning out so I was sceptical about audiobooks.

However, I was willing to give it a shot as audiobooks give me the option to multi-task in a hands-free manner as I do not need to hold or look at a physical book.

This perk appealed greatly to me as a person who values time and efficiency.

Here are some genres that I explored on the app.

I launched the Storytel app and played Mark Manson’s “The Subtle Art of Not Giving a F*ck” while I cleaned my room.

Despite not being a person who typically enjoys self-help books, I enjoyed Manson’s straightforward conversational writing that was enhanced by Roger Wayne’s expressive storytelling abilities.

Without being boring and unrelatable, it reminded me that I should be more selective about the things I stress about instead of overwhelming myself with anxiety.

Cleaning my room is usually a chore I dread, but I found it easier to complete the task with an audiobook.

As a Chris Carter fan, I had to check out the audiobooks of his novels to see if it enhances the experience.

Reading the vivid description of the crime scene is usually sufficient to capture my interest.

I decided to play “The Caller” (also available as an e-book) while painting my toenails and using a sheet mask one evening. 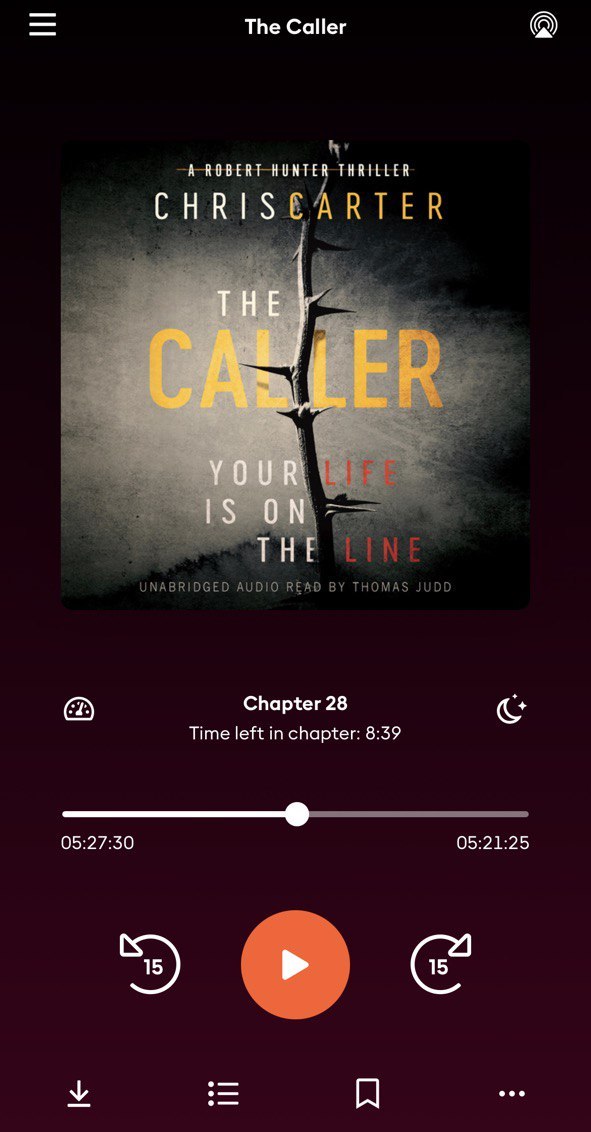 “The Caller” follows police detective Robert Hunter on yet another murder investigation in Los Angeles that involves a serial murderer who murders his victims in front of their respective loved one via video calls.

Despite indulging in self-vanity, I regard this activity as a mundane chore that I cannot afford to outsource.

I used to put on an episode of some television series but there were two problems:

Perhaps it is the nature of this particular crime case in the story but the audiobook delivery was pretty good. It even conveyed the deep demonic-sounding digitally-altered voice that the perpetrator used during the video calls.

On top of enjoying the audiobook, I also managed to paint my toenails with far less mess.

On one of my recent grocery runs, I decided to listen to Amanda Lee Koe’s “Delayed Rays of a Star” — another book that was on my to-read list.

A stark contrast from her first book, “Delayed Rays of a Star” is a novel that follows three female cinematic legends who were captured in a photograph in 1928.

Koe’s writing, voiced by narrator Orlagh Cassidy, succeeds in taking me back to the glamorous flapper era in Europe, especially when she pronounces the French phrases with the precision that I lack.

Storytel’s offline mode allowed me to download the audiobook in advance so I could listen no matter where I am, even without unlimited data and wifi access. 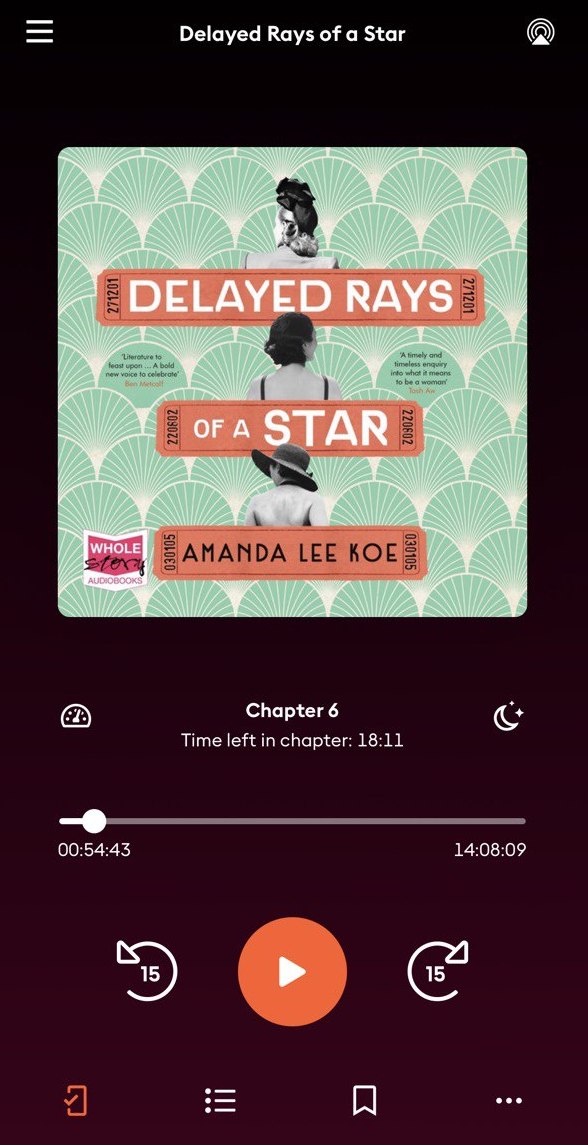 The orange icon of a tick in a rectangle on the bottom left corner means the audiobook has been downloaded for use in offline mode.

If you’re a restless multi-tasker who struggles to sit still for silent reading, audiobooks are a great way to get some reading done while you’re on the move.

As a theatre junkie during the pre-pandemic days, I had watched some theatre video recordings on platforms like YouTube and Vimeo during the circuit breaker to alleviate the withdrawal symptoms of enjoying live productions.

I noticed the "Best of L.A. Theatre Works" under the Poems/Short Stories category that had quite an extensive collection.

It piqued my curiosity as I had not heard radio plays or experienced plays in the form of audiobooks.

While preparing dinner one evening, I played “A Doll House” by Henrik Ibsen, which was a recording of the live production at a Los Angeles theatre in September 2011.

“A Doll House” tells the story of Nora, a domestic wife who has been dominated by her father or husband all her life finally decides to be independent.

While the audiobook (or radio play) does not replicate a live performance, especially the visual spectacle, the experience of listening to it exceeded my expectations.

The audio was crisp and clear with the occasional punctuation of audience laughter at appropriate moments but no other background noise, which gives me room to imagine the scene.

It offers a different experience from reading the play script, which was the only other way I experienced plays, besides live productions.

The different voices showcased in audiobook versions of plays also offer something a little more dynamic to listen to if you struggle to get into novels.

Regardless of which genre you prefer, you are spoilt for choice with Storytel.

My first experience with audiobooks turned out to be better than I had expected, especially with the large diversity of books available in e-book and audiobook format that are difficult to find in free online libraries.

The narrator’s calm yet expressive voice, the narrative itself, or both, made me feel a lot less unstimulated as I go about my day, even when I perform the same tasks.

However, you do need to find a genre that you are interested in, which is easy with Storytel’s unlimited downloads.

This sponsored article has helped the writer take the edge of mundane everyday chores with audiobooks.

Top images via Pexels and Storytel.